This Blog entry arrives late because I had it all typed up and then I hit the wrong button and deleted it all. I had to wait a few days before feeling sufficiently enthused to start writing it all over again, but hey... practice makes perfect!

November is a bleak month in Scotland. The trees are bare, the skies are grey more often than blue and there is a general sense of tiredness with the onset of the Winter months. This might be why we chose to have our National Day, St Andrews Day, on the 30th November. We need something to look forward to in an otherwise dreary month.

Fortunately, the new Scottish Government is doing its bit to stimulate Scotland's National identity and this has resulted in St Andrews day being promoted as a bigger day of celebration than ever before. This year was also a big event as St Andrews day was the culmination of the events for the "Year of Homecoming".

We couldn't arrange our schedule to be in the Capital for the 30th November, but there was no way that I could keep Aurelia away from the Christmas Markets so we treated ourselves to a couple of days in Edinburgh on the 28 / 29th. The city had a great buzz about it and the street entertainments (accompanied by steaming mugs of Mulled Wine!) really helped to blow away the winter blues. 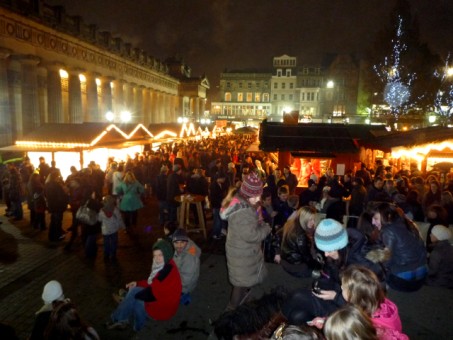 There were nice little patriotic touches all around the city centre and it was nice to see Scots celebrating their Nationhood with a new found sense of identity. One such instance was a projection of Scottish icons on to the facade of the City Chambers. We tried to video this, but the camera lens was a bit dirty and the end result wasn't worth posting... a pity! 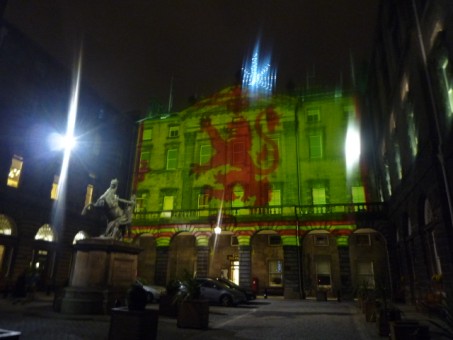 Our evening was topped off with a great meal in one of our favourite Franco-Scottish restaurants near Edinburgh's Royal Mile. This restaurant is featured in our guides and is a great find as it is so close to the Royal Mile, but is also hidden down a back street where your average tourist never ventures. Such places are a real pleasure to find near the Royal Mile, where the volume of visitors makes it possible for some very mediocre eating places to thrive. 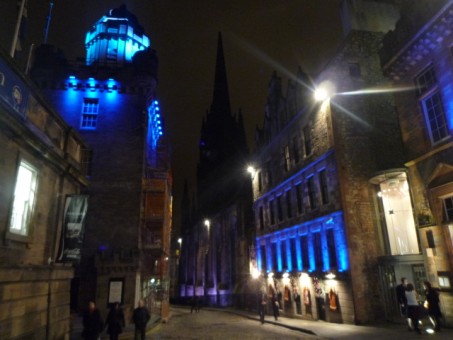 Of course, we never go anywhere without doing some research and this time it was a visit to the Camera Obscura and the Museum of Flight. We have both done the Camera Obscura before, but it is always worth a return visit as the exhibits do get changed periodically and the display of 3D photography never loses its ability to fascinate. The Museum of Flight also had some new exhibits and we could easily have stayed longer than the 2 hours that we had scheduled for. A great new feature at this Museum is the "Fantastic Flight" section with its "hands on" experiments and flight simulators. You can read our reviews of these attractions by clicking on the links below: