October is the start of the "quiet" season for Tourism in Scotland, but that doesn't mean that we get a chance to put our feet up. If anything, it feels like the work gets harder because this is the time of year when we start the major reviews of our itineraries to update and improve them.

There are always some new places that we want to include in the guides; wee tearooms, craft shops, or little side roads that we have stumbled upon that merit a mention. One sad consequence of the recession that we have noted this year is an increased number of restaurants and B&Bs being put up for sale. It isn't an epidemic problem, but there certainly seems to be a higher number of B&Bs for sale than in previous years.

In addition to listing new tourist attractions, we are improving the itineraries with some new features that customers have suggested. One of these features will be the inclusion of GPS information for the major attractions. We resisted doing this because GPS directions are really quite flawed in our opinion. We have found that Sat Nav Systems guide you on the busier main roads that bypass the interesting "Secret" places which we are all about discovering. The other problem with GPS / Sat Nav is that it becomes hopelessly vague in some parts of the Highlands. We have a B&B owner on the shores of Loch Linnhe (just south of Fort William), who tells of a German guest that called him for directions to his house. The Guest claimed that his GPS said that he should be sitting outside the B&B, but he couldn't see it. After asking the visitor to describe his surroundings, they realised that he was on the opposite side of the Loch!!! The GPS was only out by about a 1/4 mile, but the Guest still had an 18 mile trip and a ferry crossing to get to the B&B!!!

Instead of relying on GPS systems, we prefer to provide very detailed directions and clear instructions about which road signs to follow. This means that we have to drive the roads to take notes and photograph road signs. We possibly have one of the largest photographic records of Scottish road signs and now get excited (OK, mildly excited) when we find a quirky new sign.

Of course one of Scotland's most famous road signs is the one to "Lost", which is a little hamlet on a side road in the Strathdon Area (near where Billy Connolly has his Scottish mansion). The signpost to "Lost" appears on postcards that you will find all over Scotland. The signpost must also appear in "the flesh" in a lot of other places as it is frequently stolen by unscrupulous souvenir hunters. 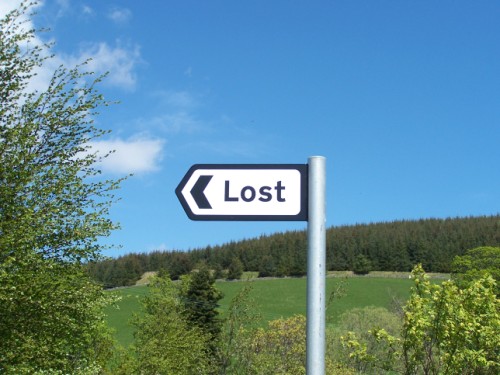 So why do I mention the signpost to "Lost", well we think we have found one that upstages it! In this case it was not the signpost that was stolen, but the letters. Send us an email if you think you know where this sign is. Sorry, there's no prize for being right just the smug glow of being a smarty-pants! 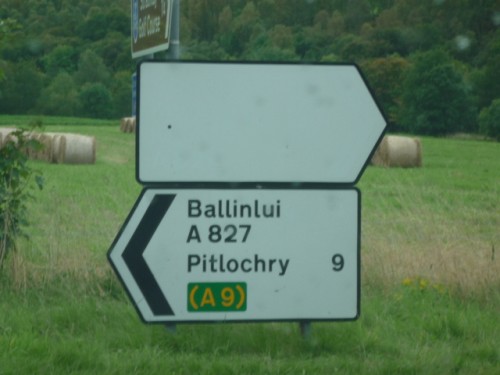 And finally, it's a dull wet October day outside so we all need something to cheer us up! And what could be better to cheer us up than a video of a warm summer day, a lovely beach near Morar and Aurelia making a pathetic attempt to climb a sand dune. I apologise that I filmed it with the camera side-ways, I would also like to apologise for the naughty French swear words that Aurelia says at the end!!!