Our travels this month weren't strictly for research as we managed to arrange a trip to Perthshire that coincided with our first wedding anniversary. Of course, we can never really manage to drive around Scotland without stopping to photograph road signs or to check out back lanes, but we did manage to strike a good balance of self-indulgence and work.

Our aim for the weekend, apart from having some good food and drink, was to fit in as many waterfall walks that we could during a day trip around Pitlochry.

To try and capture some of the mood of these cascades we took short videos at the Falls of Bruar, Birks o' Aberfeldy and the Reekie Linn. We also visited the Linn o Tummel, but forgot to do a video here.

The restricted view of a camera can't really do justice to these locations, but we hope these pictures give you some sense of their scenic  beauty.

First up are the Falls of Bruar a few miles north of Pitlochry and easily accessed from the House of Bruar shopping complex. The House of Bruar is a bit of a tourist trap with incredibly expensive clothing, however the cafe has excellent, affordable cakes and you can pile a mountain of whipped cream on top of the cake as it is self service. . 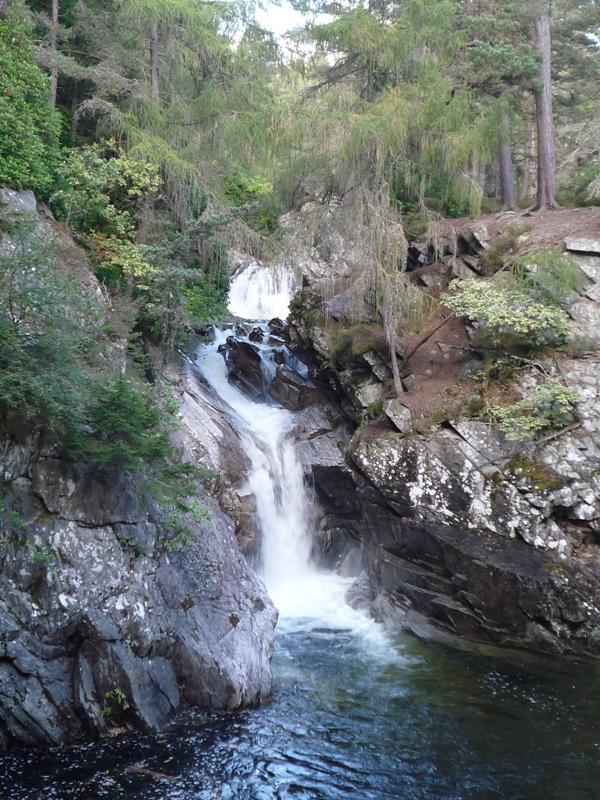 The walk to the falls is a lovely route uphill through forests that were planted in the early 1800's. The planting initially started as a memorial to Robert Burns who had written a poem in 1787 titled the "Humble Petition of Bruar Water". The poem is written as a request from the river to the Duke of Atholl asking that he plant some trees on the barren slopes so that the river is kept shaded and cool and doesn't run dry. 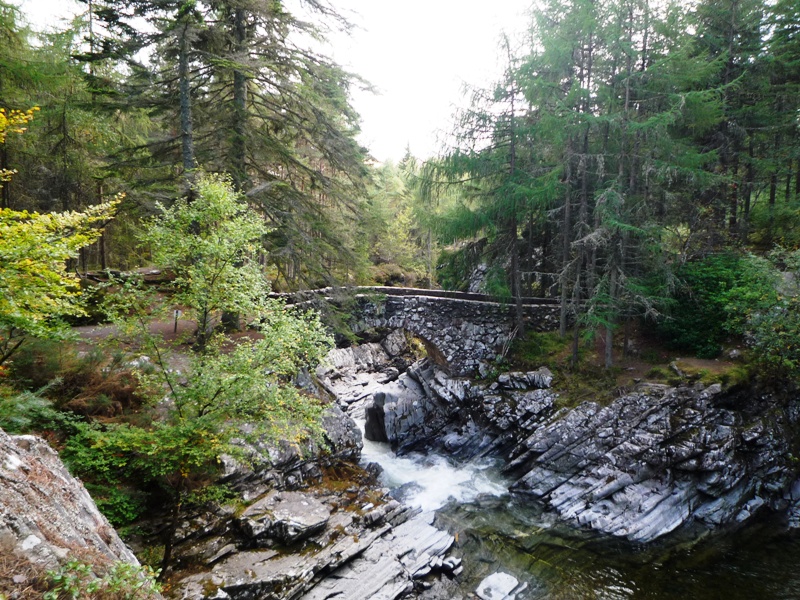 It's not his finest or most memorable work, but the petition worked and the Falls of Bruar are now one of the most beautiful woodland walks anywhere in Scotland.

I've copied a wee bit of the poem below as it is quite a lengthy bit of verse.

Would then my noble master please
To grant my highest wishes,
He'll shade my banks wi' tow'ring trees,
And bonie spreading bushes.
Delighted doubly then, my lord,
You'll wander on my banks,
And listen mony a grateful bird
Return you tuneful thanks. 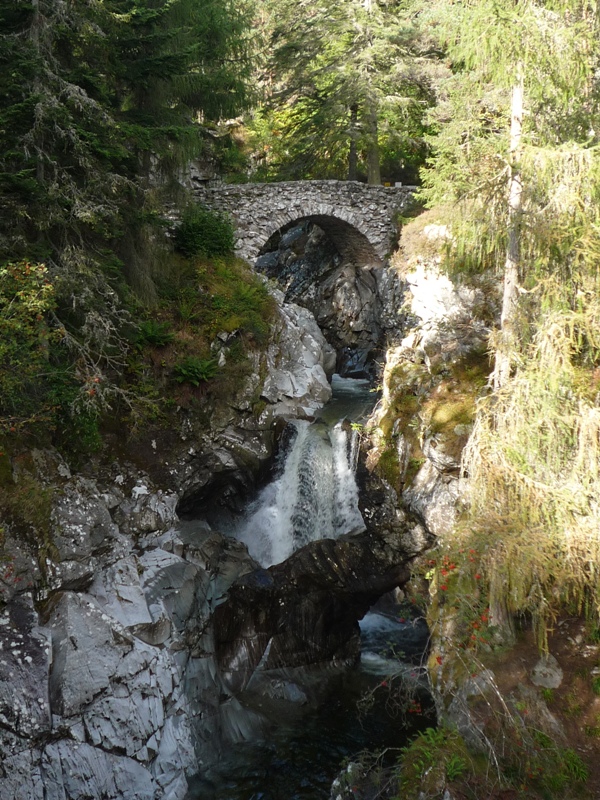 The first waterfall is easily reached with a short walk, but you really need to climb to the Upper Bridge to get the full effect. The Video Clip is just one small section of the waterfalls.

Next on the list is the Birks o' Aberfeldy, which were also made famous by Robert Burns. He seems to have had a waterfall themed tour as well! 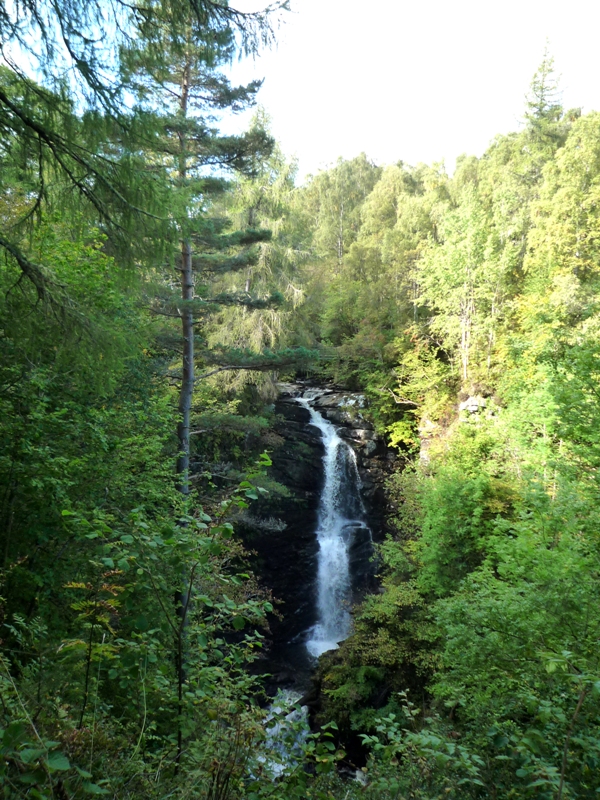 The Birks is a wooded glade just south of Aberfeldy and a popular Sunday walk with the locals. In our opinion, it isn't quite as appealing a walk as the Falls of Bruar because you tend to have your view of the waterfall blocked by trees. The cascade is also more hidden because it lies in a deeper gorge with steep sides that are too dangerous to edge up to.

Drive west from Pitlochry for an hour and you can get to the pretty village of Alyth which is a few miles south of the Reekie Linn waterfall.

It is an easy walk from the road to the top of the waterfall, but the Reekie Linn is much less visited than the Falls of Bruar as it is on a road that is away from the mainstream tourist trails. In fact, it's easy to drive past the car park for the Reekie Linn waterfall and not even know that it was there.

Unlike the Falls of Bruar and Birks of Aberfeldy, the path starts at the highest point of the waterfall but it is hard to really appreciate the 24-metre drop of this cascade as it happens in 2 stages and the canopy of trees obscures the views of the bottom pool. To get to the best viewpoints you need to walk a few hundred metres beyond the waterfall and look back.

Our video doesn't do justice to the energy of this cascade, which certainly seems like the loudest of the three.

The word "Linn" is a Scottish word that describes a waterfall in a narrow gorge. Consequently, you'll find lots of cascades around Scotland that carry the moniker "Linn of X".

The Linn of Tummel is within walking distance of Pitlochry, but it would be a good hike of around 3 hours to get there and back via the back road that goes along the west shore of Loch Faskally to the River Tummel. If doing this walk, you follow the road alongside the River Tummel, passing the power station and memorial to the men that constructed the Hydro-Electric scheme in this region, and then cross the river on the "Coronation Bridge". 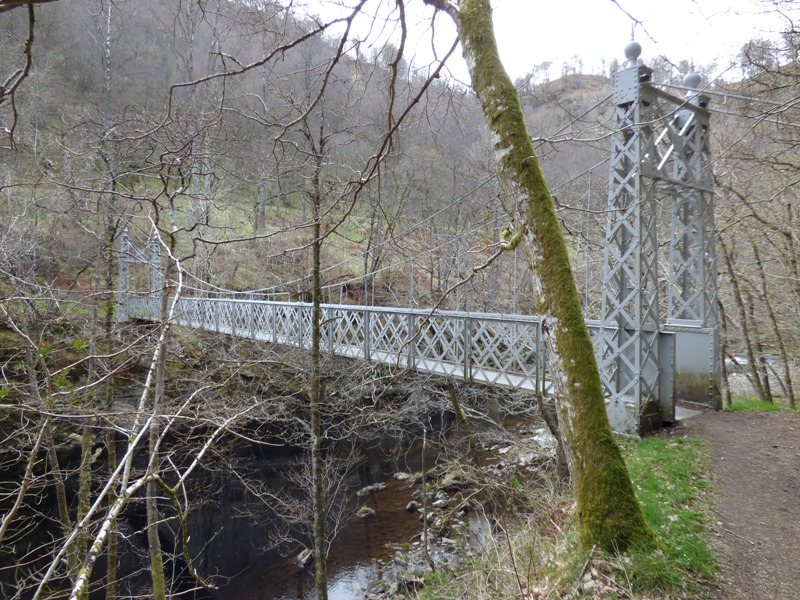 From the bridge, it is a relatively short and attractive walk on a woodland path to get to the cascade where the River Tummel squeezes between rocky outcrops. 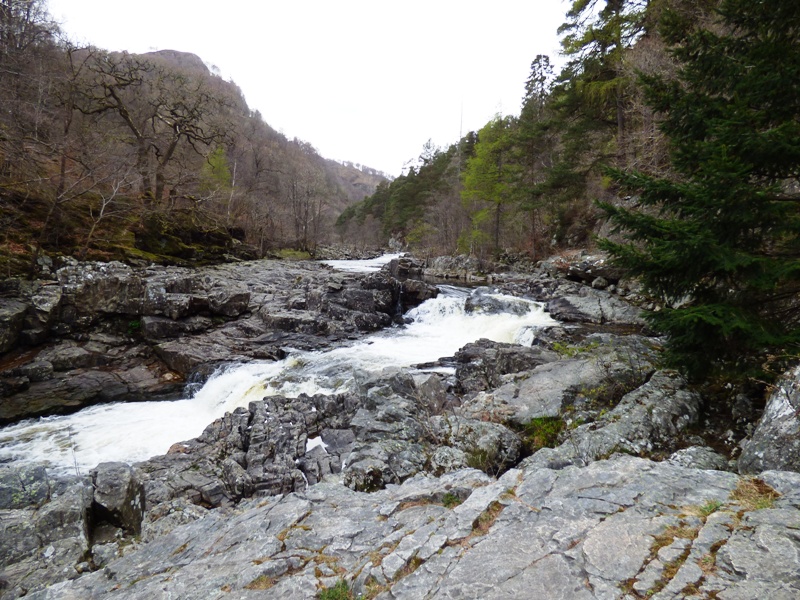 It's a lovely picnic spot and you might, if visiting in late summer / autumn, see some salmon leaping the falls. Sadly the number of salmon in the river has been in decline so this is not such a common sight as once was. The other wildlife to watch out for in this area is Red Squirrels.

If you like the idea of visiting these places, you'll find our Romantic Scotland tour gives you a route that is ideal for a Honeymoon in Scotland.