What on earth is happening with the weather this Winter!? It snowed in Ayr on the 18th December and it's still here 2 weeks later... this doesn't happen in Ayr!!!

When I was a kid and it snowed, you would get your woolies on, a pair of gloves and by the time you'd tied your shoelaces the snow had melted. This might surprise people who live abroad and have images of highland cattle stoically weathering out blizzards, but snow is quite a rare thing on the South west coast of Scotland.

On the plus side, the cold weather has brought with it some great days of clear blue skies and we had a great trip to Isle of Luing (just south of the Isle of Seil) at the end of the month. I must admit that I was not wildly enthusiastic when Aurelia suggested taking a walking trip on Luing. My reticence to go was primarily due to the lack of a pub on the island. A winter walk is just not the same without the anticipation of a finale in front of an open fire in a good pub with a nice pint or maybe a wee nip of a smokey Islay malt. However, I was very wrong to write off Luing so hastely.

Luing (pronounced "Ling") is normally served by a small car ferry that crosses a narrow, but quite treacherous stretch of water. Treacherous due to the strong tidal currents that surge through the narrows. On the day of our visit, the car ferry service was being substituted by a small boat that could only carry 12 passengers. The return fare was a token £1.60 per person!

Once on Luing, we followed an easy coastal trail that goes anti-clockwise around the island past the Slate Quarries that were a source of income for the island from 1749 - 1965. The remains of the slate works are present everywhere and it creates a most unusual landscape. However, the real appeal of the walk around Luing were the fantastic views across to Mull and the numerous small islands of the Garvellachs, Lunga and Scarba. 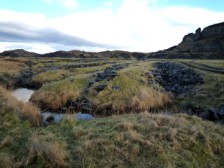 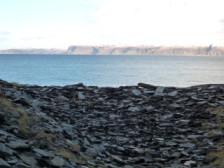 We closely followed the coast down to Luing's village of Cullipool, which is a pretty collection of old slate workers cottages (but there's no pub!). On our way into Cullipool we met one of the locals who was able to tell us some stories about the slate works and his uncle (a former slate worker) still lives there. Sadly, a large number of the cottages appeared to be empty holiday lets, but this is a tragically common occurence in any rural Scottish community. 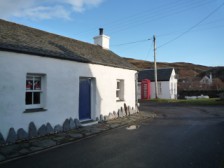 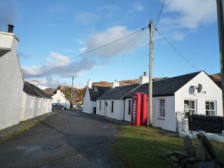 The return walk to the ferry terminal (a rather grand title for what is not much more than a wooden bus shelter) took us much less time than anticipated, despite Aurelia stopping some Luing cattle for a photo shoot. Luing cattle are a mix of Highland and Shorthorn. This seemingly endows them with the high quality beef of a Shorthorn and the hardiness of a Highlander. An unexpected side-effect of the cross-breeding is that they are also "naturals" in front of the camera. 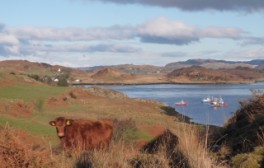 Unfortunately, we had a 50 minute wait in the glorified "bus shelter" that is Luing ferry terminal. To be fair, the locals have tried to make the waiting room more hospitable by supplying one cushion (which we had to fight over) and a collection of magazines. Not so good was the fact that all the magazines were "Tractor Monthly". After 50 minutes, we were getting quite knowledgeable about Massey-Fergusons and ploughing techniques. 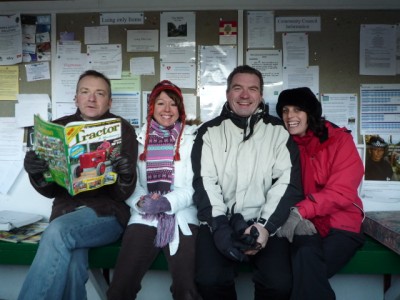 The return journey on the small ferry boat was much more entertaining as the tidal race through the narrows must have increased to about 7 knots (~12 km/h) and the boat was being re-directed by the eddies. There was clearly some degree of skill required to arrive at the place that you were aiming for.

The day had a great ending, because we stopped at the Tigh an Truish Inn on the way back. This is a great little pub that can trace its history back to the mid 1700's. The name means “House of Trousers” in Gaelic, as the Islanders would stop here before visiting the mainland to change out of their Kilts and put trousers on after the Government ban on wearing Kilts in 1746. We bagged the fireside seats and quaffed down a few pints of real ale with, as the humorous barman described them, "a quality selection of bar-room snacks" (i.e. peanuts, crisps and pork scratchings!). 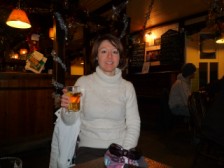 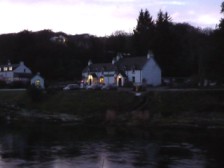