The Broch of Gurness is the best example of one of these Iron Age dwellings that can be found on the Orkney Mainland. There are several other brochs scattered around the Orkney islands, but only Midhowe Broch on Rousay can rival Gurness for its relative completeness. Both of these brochs overlook the turbulent tidal waters of Eynhallow Sound and have many similarities in their design.

A major difference between the Broch of Gurness and the broch at Midhowe, is the extent of the community that surrounded it. Midhowe has a few buildings outwith the central defensive tower of the broch. By comparison, Gurness has a sprawling village around it.

Although more than 4000 years separate the periods of the 2 communities, the houses at Gurness have some similarities to the ones to be seen at Skara Brae. However, you can touch & wander amongst the ruins at Gurness, where as the archaeological value of Skara Brae means that you can only look.

The broch would originally have stood 8 metres tall (it is now 3.5 metres at its highest point), but through the years the towers defensive role became less important and the building was dismantled to provide stone for other dwellings. It is thought that the broch continued to be inhabited as a farmstead until ~700 AD. The houses of the village were also scavenged for building materials, but you can still get a feel for what appears to have been a neat and organised community. Far more civilised than you might imagine for a culture existing on what was then the edge of the known world.

Another feature of the Broch of Gurness that is not to be found at Midhowe, is a flight of neat stairs which descend to a lower chamber that contains a water tank filled by spring water. We have to take the archaeologists word for this as the steps to the "cellar" are blocked by an iron grid.

Like so many of Orkney's archaeological sites, the Broch of Gurness was not excavated until the late 1920's. At that time it was just a grassy mound. It makes you wonder how many other "finds" might still be buried on these islands.

Closed for lunch from Noon - 1pm 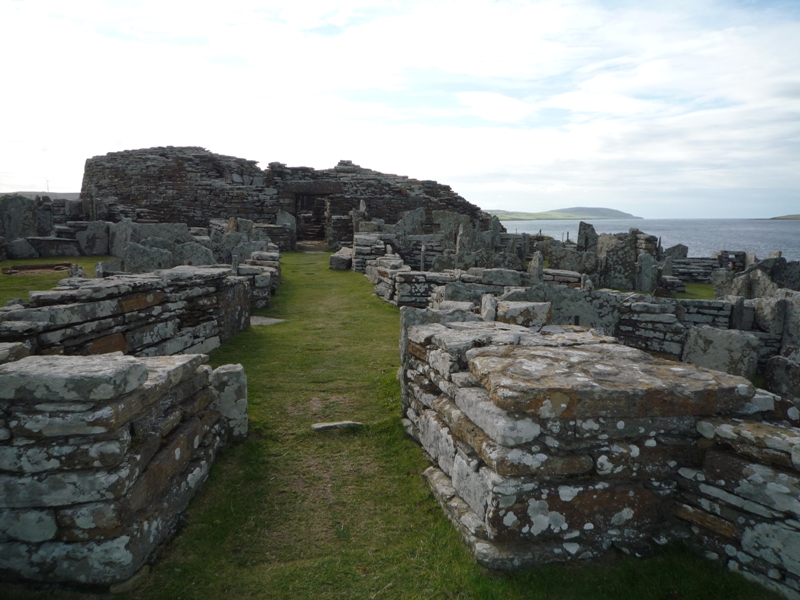 Broch of Gurness Features In