"Where to see Highland Cows and other Hairy Coo Questions!"

Something just occurred to me!

In all the years I’ve been doing this blog, I’ve never written anything about that most iconic of Scottish creatures the Highland Cow.

1. Where to see Highland Cows?

So let's start with the most frequently asked question, and the answer is… all over Scotland. Now, I don’t mean they are roaming across the Highlands in massive numbers like Buffalo migrations on the American prairies, but you will find “folds” of Highland cattle all over the country.

You don’t even have to go into the Highlands to find Hairy Coos. If you are in Glasgow, you will find that there are some resident old Cows in the Pollok Country Park on the southside of Glasgow. This is also the location of the Burrell Collection, but at the time of writing the building that houses this art collection is closed for some major repairs.

Listed below are some places where you are more or less guaranteed to see Highland cattle: 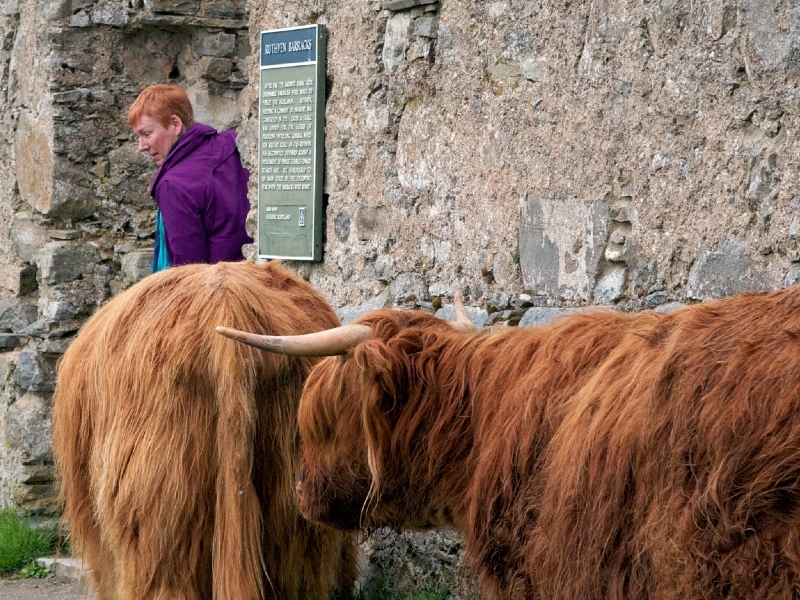 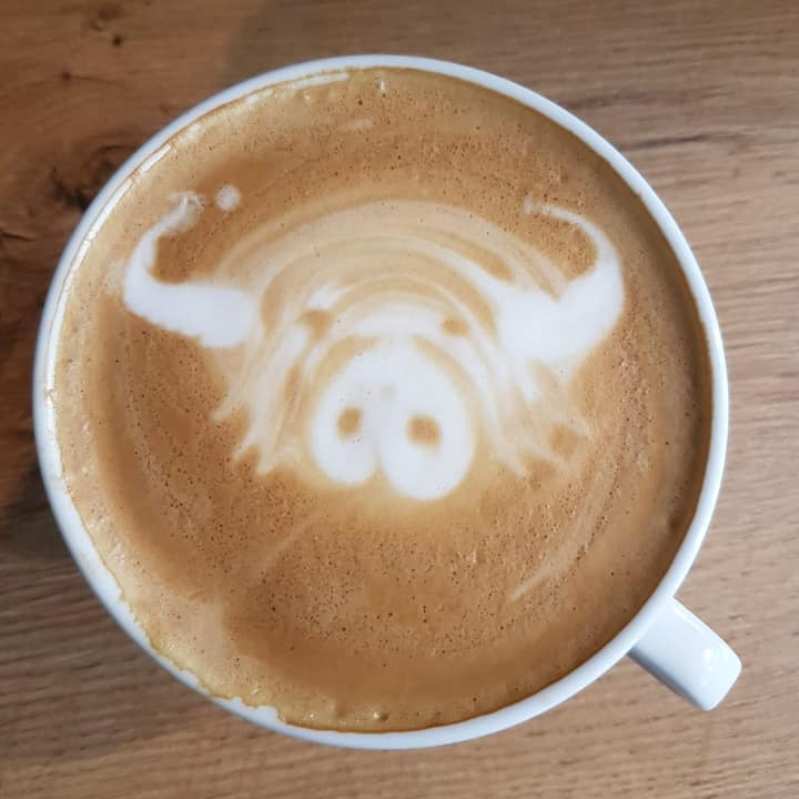 As a general rule (the exception being the ones at Ruthven barracks), they are quite placid animals. They are not friendly in the sense that they will come bounding up to see you wagging their tails, but they are very tolerant of tourists. Which is a good thing as Hairy Coos attract tourists with“Selfie” sticks like a cowpat attracts flies. 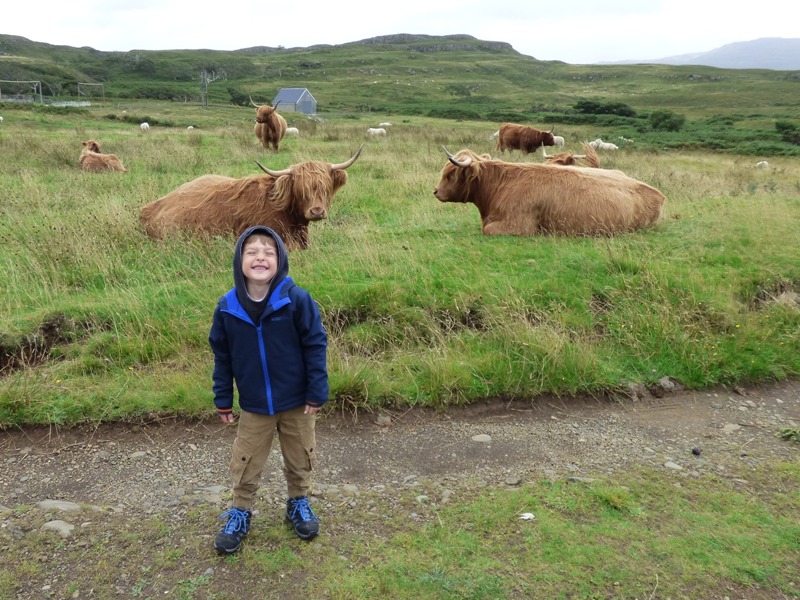 The only thing that we would warn you about Highland cows is that they are very maternalistic and, if they think their calves are threatened, they will react. We think this is why we got chased at Ruthven Barracks and had a “horn assisted” clamber over a wall.

3. What should I do if a Highland Cow is blocking the road?

Don’t toot your horn! For one thing, they really don’t care that you are in a hurry, but if they are with calves they might feel threatened and those horns can do quite a bit of damage to your paintwork. The best thing to do is just sit patiently and wait for them to get bored with the game. If you really do have to get them moving, then it is better to park your car a bit further back and then approach them on foot to try to usher them off the road.

They do seem to respond better to politeness than impatience, so talking to them in a soothing voice tends to get better results. 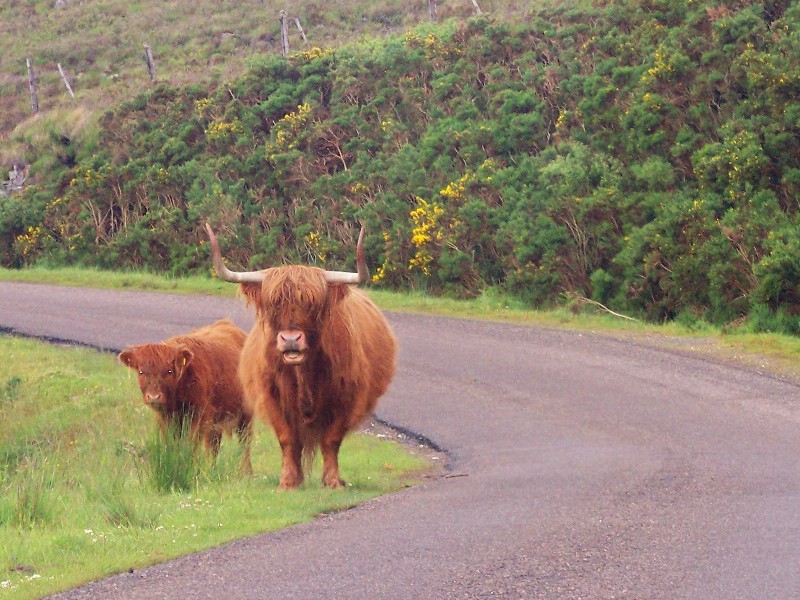 4. What are Highland cows used for?

Despite their cuteness, Highland cattle are primarily bred for their beef. Due to that thick hairy coat, Highland cows don’t need so much body fat to keep warm and they can graze outdoors all year round so they don’t need to store as much fat in their body to survive in a harsh climate. This all means that they produce a very lean and low cholesterol beef that is also very tender.

They don’t score so well when it comes to milking, something to remember if you are playing “Farm Animal Top Trumps” (this does actually exist, Google it!). They don’t produce large amounts of milk, around 2 gallons a day which isn’t enough to be commercially viable for dairy farming. However, the milk they produce is rich in butterfat (up to 10% butterfat whereas most dairy breeds will be around 3%) and this means it’s extra creamy. It  might also explain why Caboc, a really rich double cream cheese, is one of Scotland’s oldest types of cheese.

The other more obvious issue with milking a Hielan coo is the fact that nobody wants to find a ginger hair in their milk….phhhhffffttttt!!!

5. Are they always Ginger?

If you’re Scottish, you eventually get used to the tiresome cliche that putting a hairy ginger wig on something will make it look more Scottish. Hielan Coos know all about this because it was originally more common for the breed to be black haired. They actually come in a whole range of colours, including white, and can still be considered true Highland cattle. 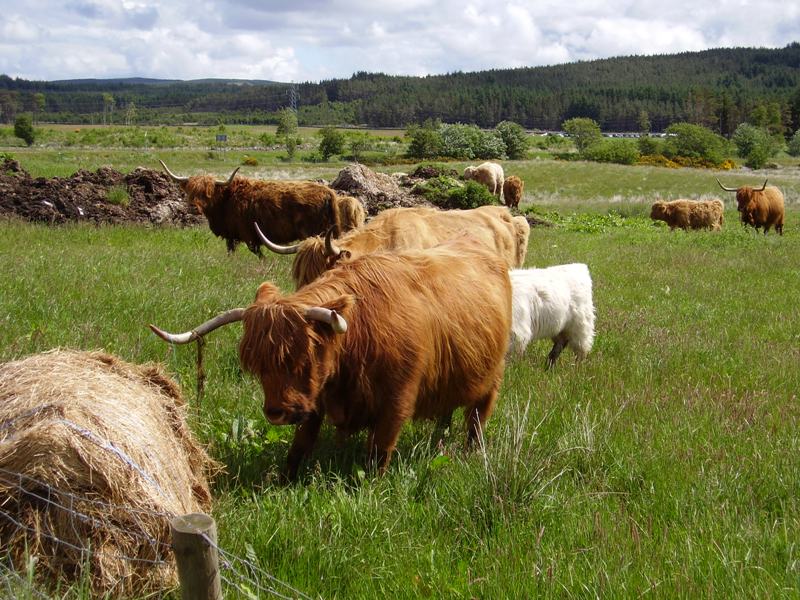 So what happened to all the black ones. Well the story goes that Queen Victoria expressed a preference for the Ginger variety and that started a trend for breeding the gingers. I’m really not sure how much credence can be given to that story as Highland folk are not known for their love of following fashion or whims. 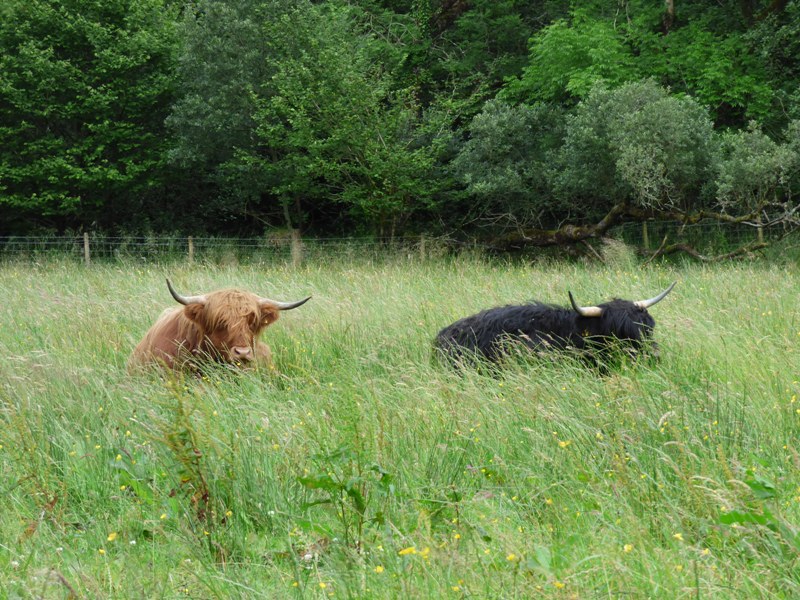 6. Why are they so common in the Highlands?

Quite simply, these cows are perfectly adapted to living here. Darwin really didn’t need to the Galapagos Island to witness natural selection. A weeks holiday on the Isle of Mull would have been a much easier way to observe how an animal adapts to its environment. 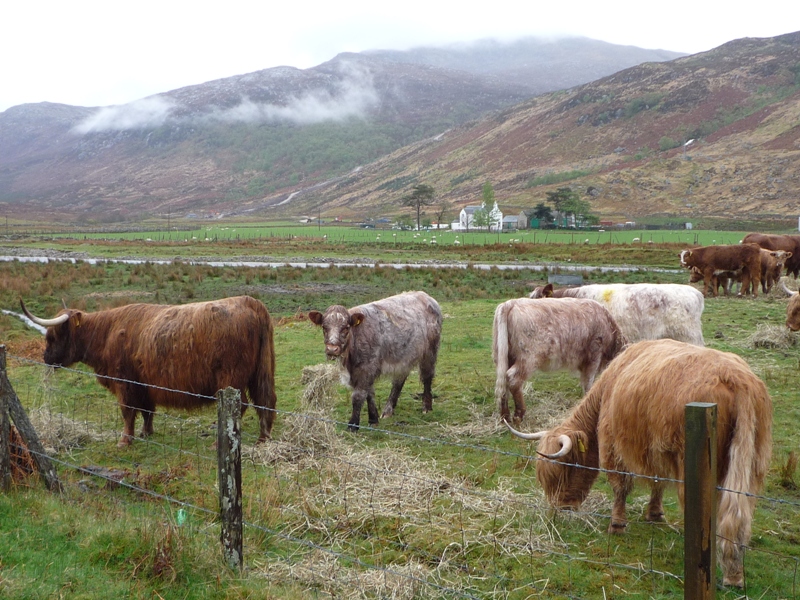 Take their distinctive shaggy hair for instance, this is perfect insulation to enable them tolerate the cold and wet Scottish winters. The top layer of their coat is oily and can grow up to a foot long so it forms a matted dense layer that water doesn’t penetrate. Underneath the shaggy outer layer is a shorter and softer layer of fur that helps them retain heat.

Then there’s those long horns which come in very handy for scratching backs, but they also enable the cows to dig into frozen ground in search of roots that they can graze on when winter conditions make other vegetation scarce.

They are also a relatively low maintenance breed. They will happily live outside all year round, they don’t need lots of extra feed supplements when it gets cold and they are known for their ability to give birth unassisted. So not too many expensive veterinary bills… ideal for us tight fisted Scots.

In fact, Highland Cows really are an embodiment of lots of characteristics typically associated with the Scots, tough, ginger, tolerant of the cold and, if not provoked, friendly.

7. Do Female Highland Cows have horns?

We’ve mentioned horns a few times already so we ought to clarify that Highland Cattle, both the male and female, come with an impressive pair of horns. Whilst both sexes have horns, there are actually subtle differences in the shape of the horns which will let you identify if it’s a boy or a girl coo. With all that hair it can sometimes be hard to tell.

The horns of a bull tend to point forward from the head in a manner better suited for use as a weapon when charging. 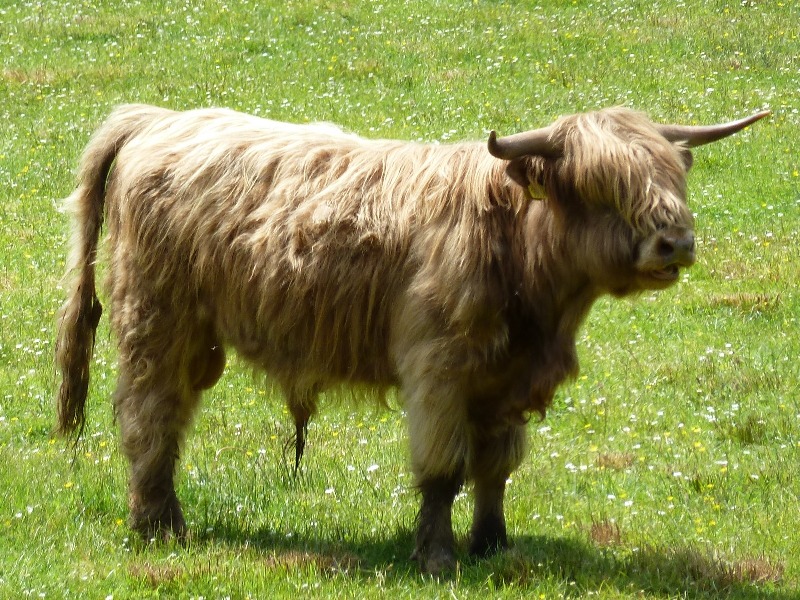 Where as the females have their horns orientated at a more jaunty upward pointing angle. 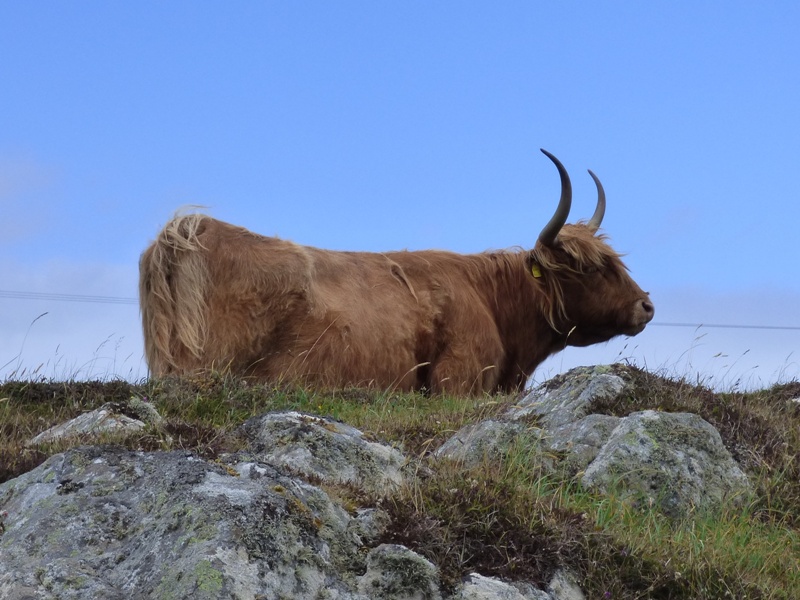 Of course, if one of them is charging at you we’d suggest you start running away before trying to assess if it’s a boy or girl.

Are you mad!? Would you really want 500kg of hairy highland cow sleeping on your sofa?

Actually, assuming that you have a very large and untidy house, or have a suitably large field, then it might not be the worst animal to have as a pet. They do live up to 20 years so you’d get your money’s worth. 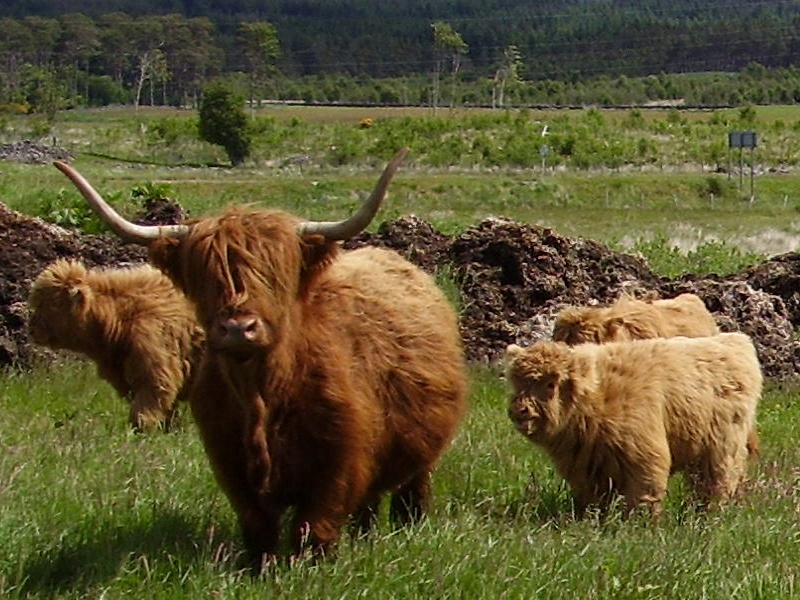 9. How much does Highland Cow cost to buy?

It’s difficult to give a benchmark price for this as it varies hugely from ~£500 to over £10,000 for a pedigree bull in its prime. Yearling bulls (i.e. a bull that is between 1 - 2 years old, might fetch as little as £500, a heifer a little more. Similarly, old cows at the end of their lives in terms of calving are going to fetch modest amounts.

If you do fancy buying one as a pet you might pick up a bargain here: http://www.highlandcattlesociety.com/shows-sales/for-sale.aspx

10. Are there any cross breeds of Highland Cow?

There is a cross breed version that has been pretty successful and that is the Luing breed (pronounced with a silent “U”). The breed takes its name from the small island to the south west of Oban where it was originally developed by crossbreeding Beef Shorthorn with our hairy Highland friends. The result is a hardy breed that produces good beef calves in areas that most beef cattle would not thrive in. They are a darker reddish brown than the usual Highland cow and a bit hairier than your usual cow, but not quite a cute as a pure Hairy Hielan Coo. 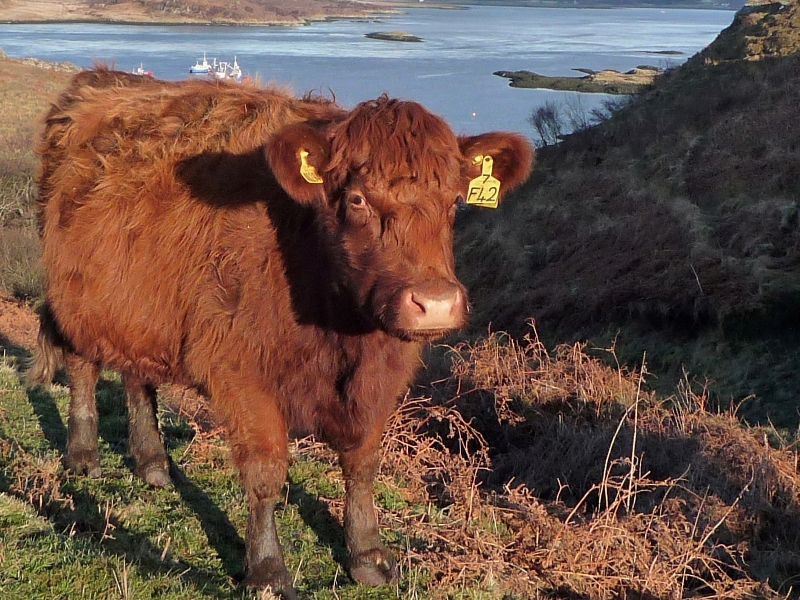