We’ve been away in the Speyside area doing research into new Whisky Tour options, and one of the ideas we had for this trip was to investigate the feasibility of a cycling tour of distilleries using the Speyside Way.

If you haven’t heard of the Speyside Way before, it is a 65-mile walking route that runs from Buckie on the Moray Coast down to Aviemore. It is one of the four recognised long-distance trails in Scotland. The other 3 are the famous West Highland Way, the Southern Upland Way, and the Great Glen Way. 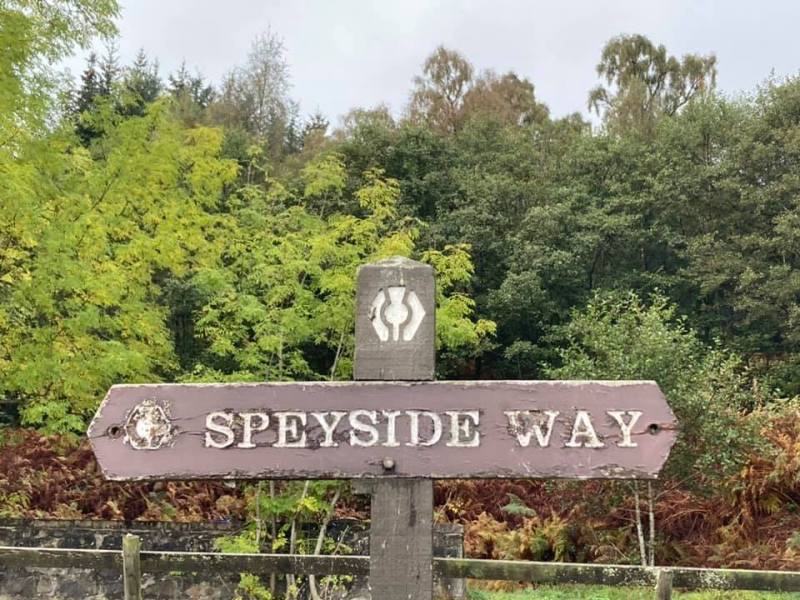 The part of the Speyside Way that we focused on in this trip was the section from Aberlour to Cragganmore / Ballindalloch. The logic for exploring this part of the route is that it follows the path of the former Speyside Railway so the going is fairly flat and most of it has a good surface.

Let me explain how this cunning plan might work. I say “might” because we cycled the path just to work out the times between distilleries. We couldn’t do any tasting tours because all of them, except Aberlour, were closed to visitors due to Covid restrictions. I imagine our average speed might have dropped a bit if we’d been tipsy after some drams.

So here’s how our Speyside Whisky Tour by bike might work out.

Starting around ten o'clock, you can head to the west end of Aberlour village for a photo stop at Aberlour distillery. You could even join one of their morning tasting tours, but you’d have to be made of tougher stuff than us to be able to face a full whisky tasting session that early in the morning and then go for a cycle run. 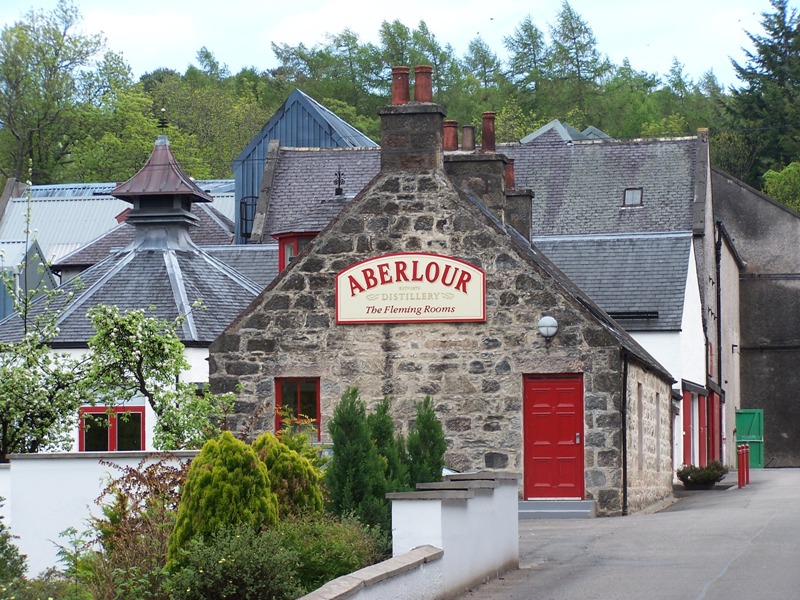 As an alternative to a whisky tasting, you could wander up Aberlour High Street to stock up on picnic treats at the excellent Spey Larder. This is foodie heaven and the deli counter is hard to resist. 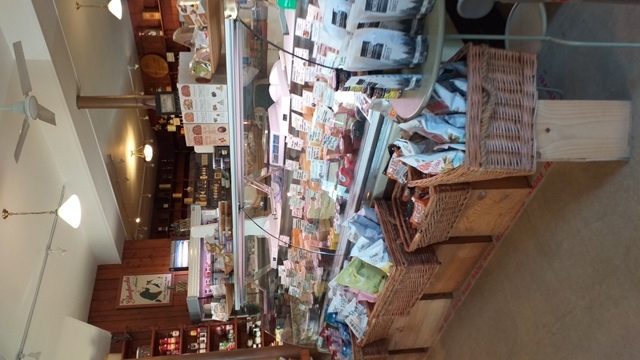 Aberlour used to be a stop on the Speyside Railway and the old train station can be found on the edge of a large public park on the north side of the village. We’d suggest that you join the Speyside Way at this point and start pedaling eastwards towards Ballindalloch. 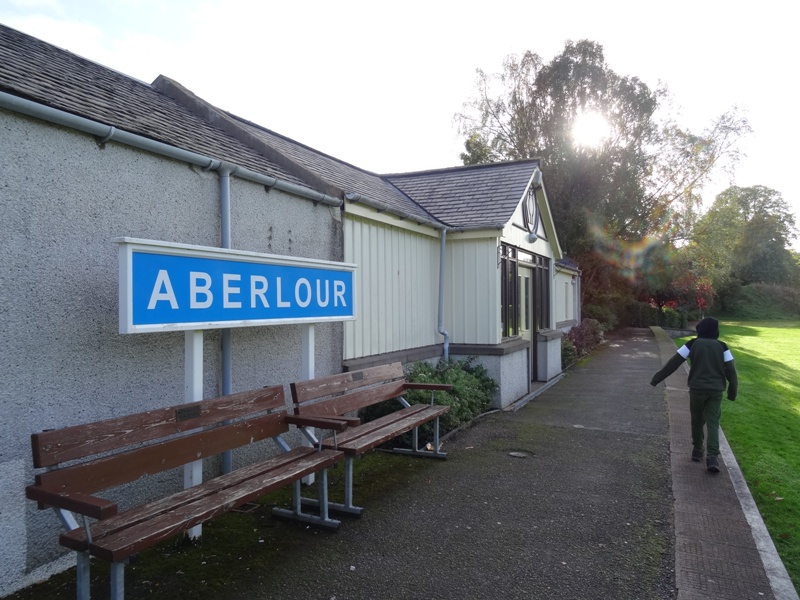 This is a good section of the path which is ideal for bikes and there’s even a bicycle maintenance stop on the way out of town. This consists of an air pump and an assortment of tools that are chained to a post. It would be wise to check your tyre pressures here as the path isn’t all as good as the first bit in Aberlour. 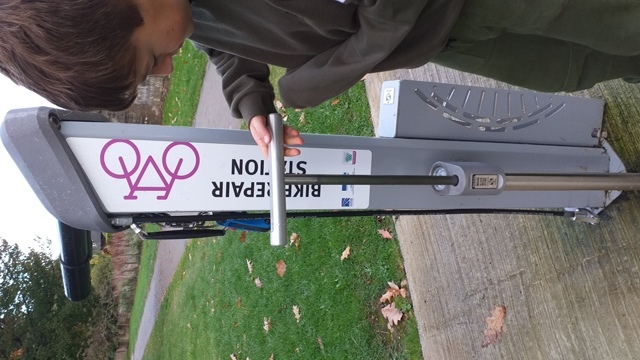 Heading east from Aberlour you have a 3.5-mile section of the Speyside way that alternates between a good wide gravel surface and potentially muddy forest trail. It’s all fairly flat so it will only take you ~20 mins to get to the next distillery stop at Dalmunach. Just before you arrive at Dalmunach, the path crosses an old railway bridge at Carron. We expect you’ll want to stop here for a photo as it is a pleasant tree-lined section of the River Spey.

Dalmunach Distillery is one of the new whisky ventures on Speyside and started production in 2014. It is built on the site of the Imperial distillery which was closed in 1998 after 100 years of production. The original warehouses remain, but the production facilities are all new and really quite attractive, especially at night when the big glass windows let you see the warm light reflected from the large copper stills. From some angles, it looks almost like a cathedral. 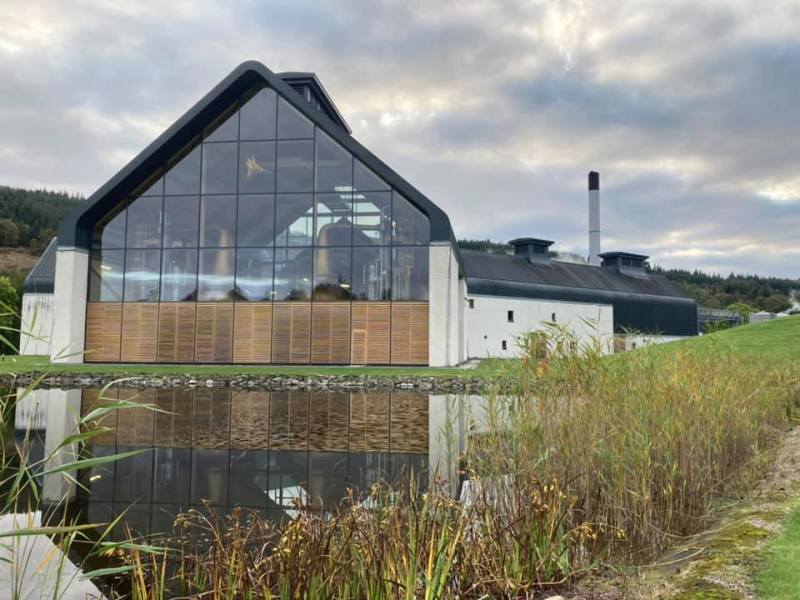 The distillery isn’t offering tours at the moment, but they have released a limited edition of their first production run and you might be able to get a bottle of this at the Aberlour visitor centre shop.

Back on the bikes, you pick up the path of the old railway line as it passes the cottages that were once homes for the workers at the old Imperial Distillery. The path on the next section to Knockando Distillery is the muddiest bit that you’ll encounter on this route. Once you get past this bit of mud, the going gets much better.

After ~15 minutes of cycling, you should have arrived at Knockando Train station which is very much integrated into the Knockando Distillery. This distillery doesn’t offer visitor tours and it isn’t a particularly photogenic group of buildings, but something prettier is just along the track at Tamdhu! 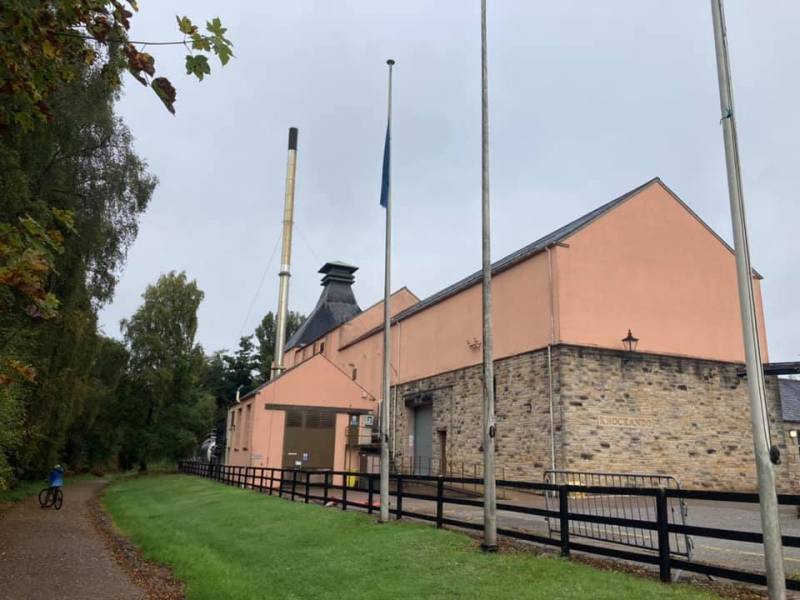 Tamdhu station is the most attractive and intact of the old railway stations that you pass on this section of the old train line. The station has had many names over the years and opened as Dalbeallie station in 1899, then it became Knockando station until it was restored by Tamdhu distillery who now use it as a facility for events. Naturally, they re-named it Tamdhu. 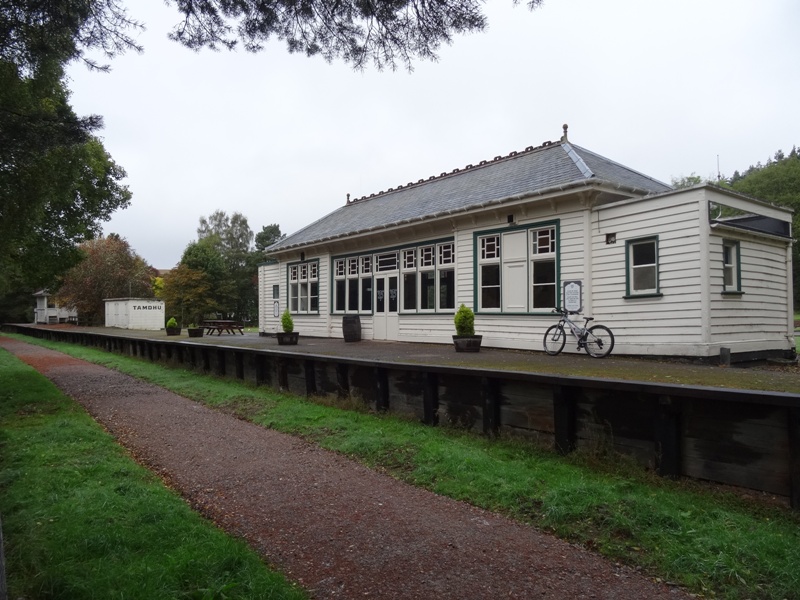 Tamdhu distillery covers a large area and most of the buildings are quite modern and functional, but the old railway station is very attractive and, in addition to the ticket office/waiting rooms, there is the old signal box which retains all the colour coded levers for operating signals up and down the line. 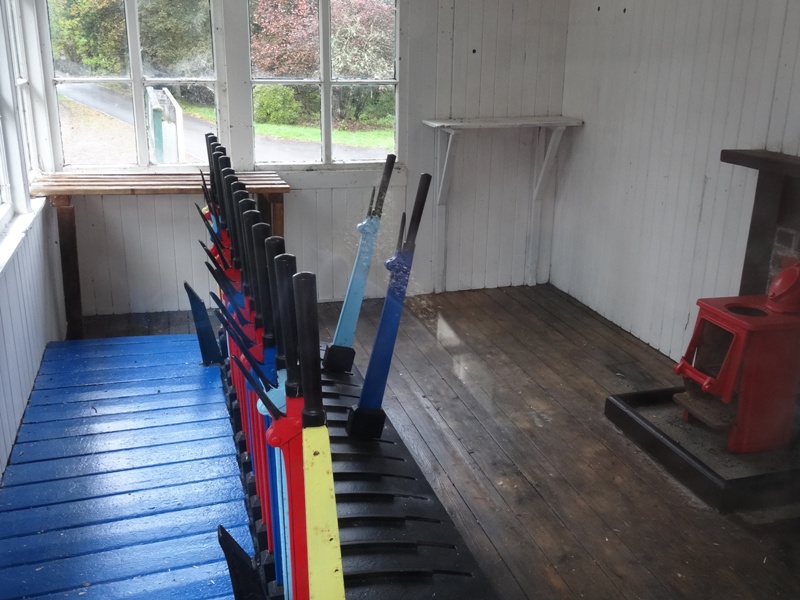 Whilst at Tamdhu train station, we would suggest a small detour from the rail line to climb up the road to Knockando village where you can visit a 230-year-old water-powered wool mill. Restoration of the mill and its Victorian looms commenced in 2000 with the mill re-opening as a fully operational enterprise in 2012. You can take a tour of the production areas and enjoy some retail therapy in the shop. 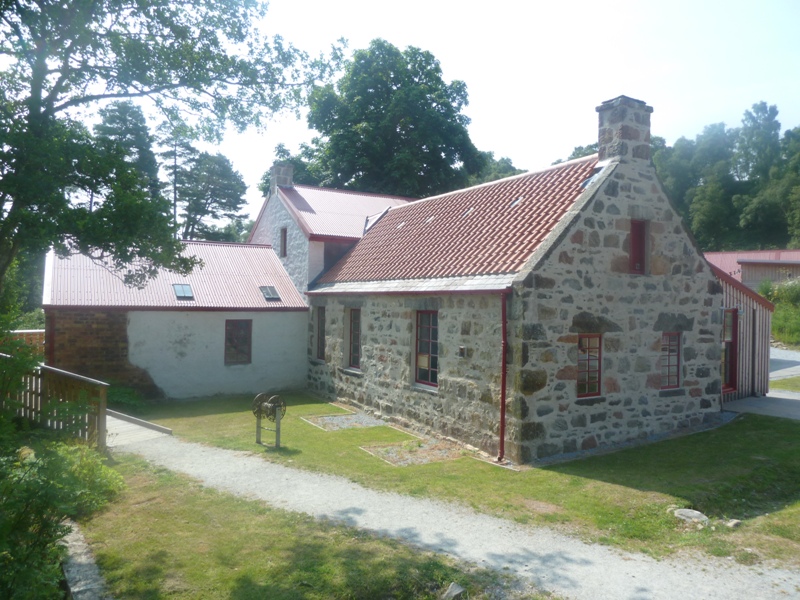 The next train halt is about 15 mins away at Blacksboat station, so named because it was near a ferry boat crossing on the River Spey. There’s no distillery associated with this station, but don’t worry as two more are just a short ride away and we’re nearly at the return point of our cycle tour. 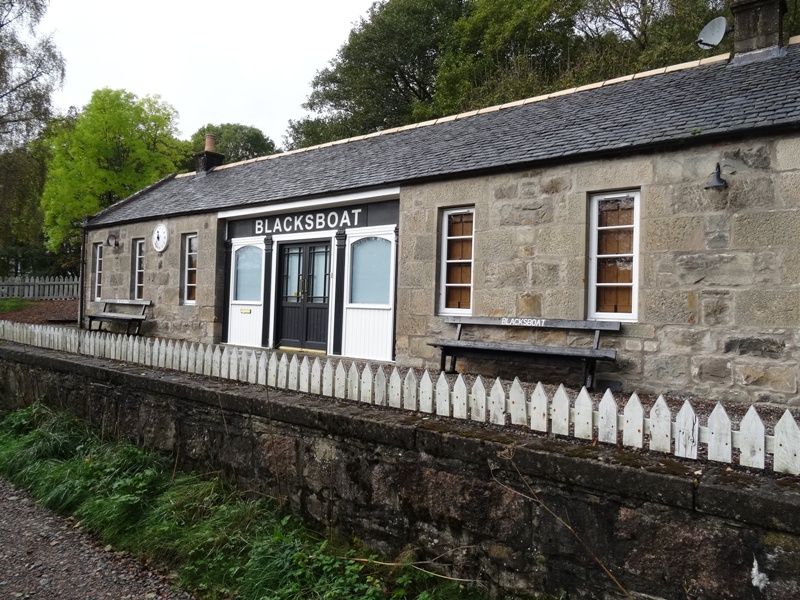 From Blacksboat, you have an easy flat section of track on the run-up to a railway bridge that takes you back across the meandering River Spey to what was the Cragganmore Granary Halt. 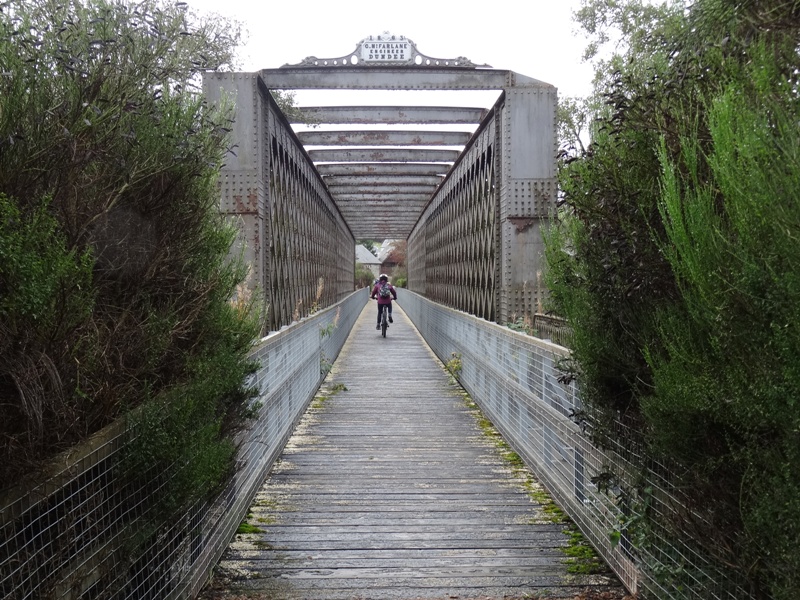 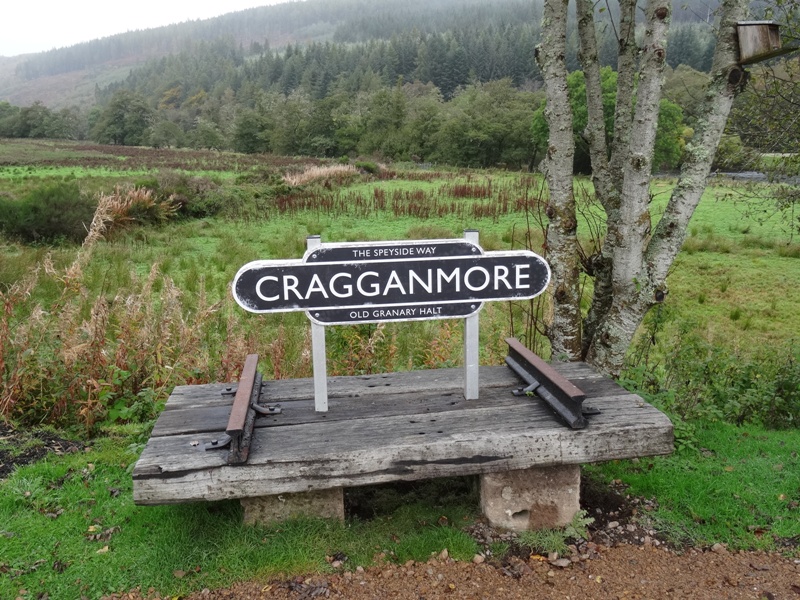 You are now just a short ride from the Cragganmore and Ballindalloch distilleries. Unfortunately, they lie in opposite directions so we’d suggest you head first to Cragganmore as it is a bit closer. Just 3 minutes of a gentle uphill ride.

Sadly, Cragganmore distillery isn’t offering any tours in 2021 due to Covid19 restrictions. But before the pandemic, you could have booked yourself onto a very enjoyable 45-minute tour with a few wee drams to sample. 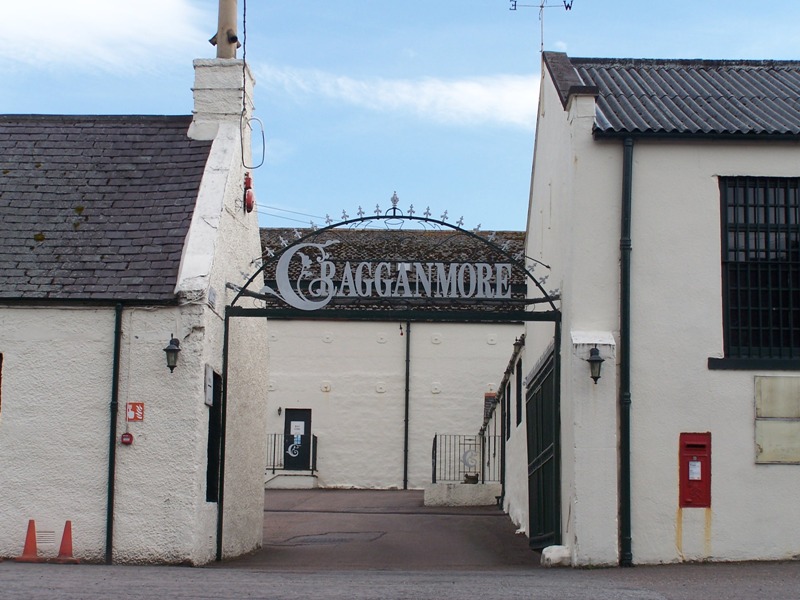 Doubling back along the road that leads to Cragganmore, you join the main A95 road just west of Ballindalloch distillery which, despite looking very traditional, is actually one of the newer distilleries on Speyside. The distillery is housed in a 19th-century farm steading that was renovated in 2011 with the intention of creating a new distillery with a traditional feel. 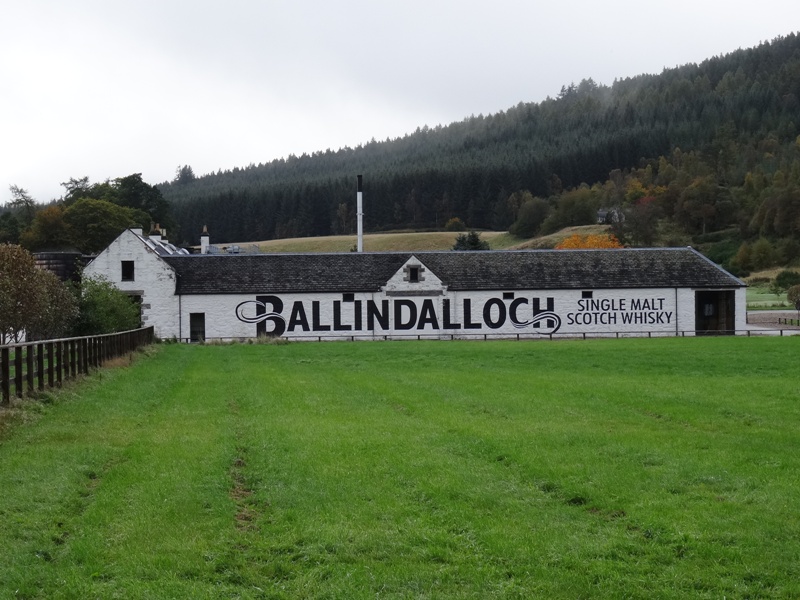 The decor gives it an ambiance akin to a gentlemen’s club or a Victorian hunting lodge and the tour is a more “intimate” experience than you would get at Glenfiddich for example. We’d certainly recommend you consider booking a tour here. And after your tour, you can grab some lunch in the adjacent Lagmore Cafe.

Other points of interest near Ballindalloch Distillery are the Lower Lagmore standing stones located just beside the entrance road, and a little further east along the A95 is the photogenic Porter’s Lodge gatehouse which stands beside an old bridge over the River Avon. Porter’s Lodge is an ornate gatehouse for the Ballindalloch estate and looks like a miniature version of a Scottish castle, complete with turret, ramparts, and gun loops. 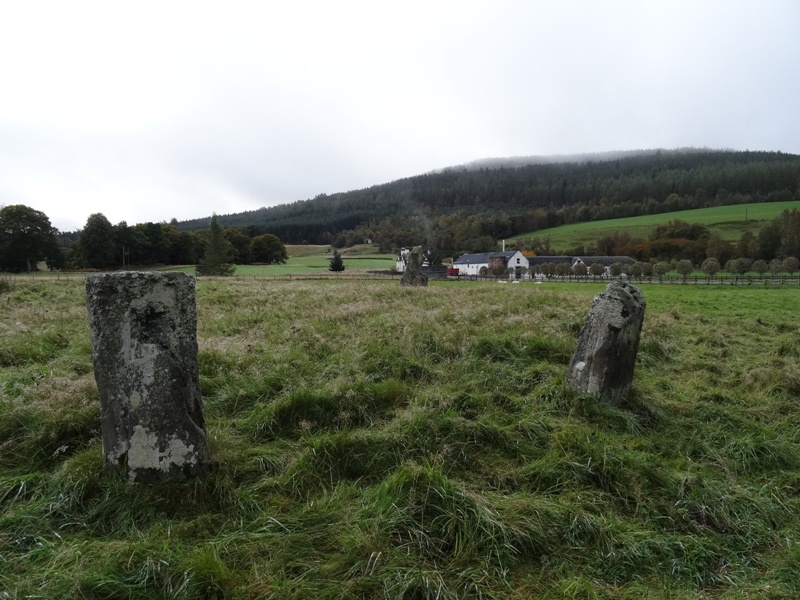 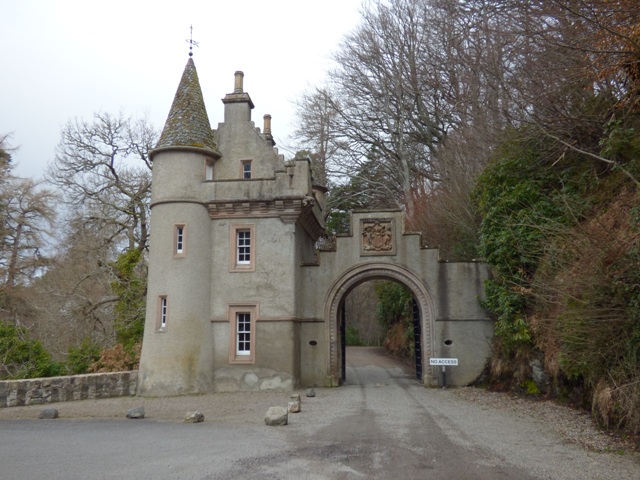 All of this will take you into the mid-afternoon, so all that remains is to wobble your way back along the Speyside Way retracing your tracks to Aberlour. Of course, if you have had a bit to drink you shouldn’t ride your bikes on any roads, but you will be perfectly safe to ride the off-road sections of the Speyside Way. 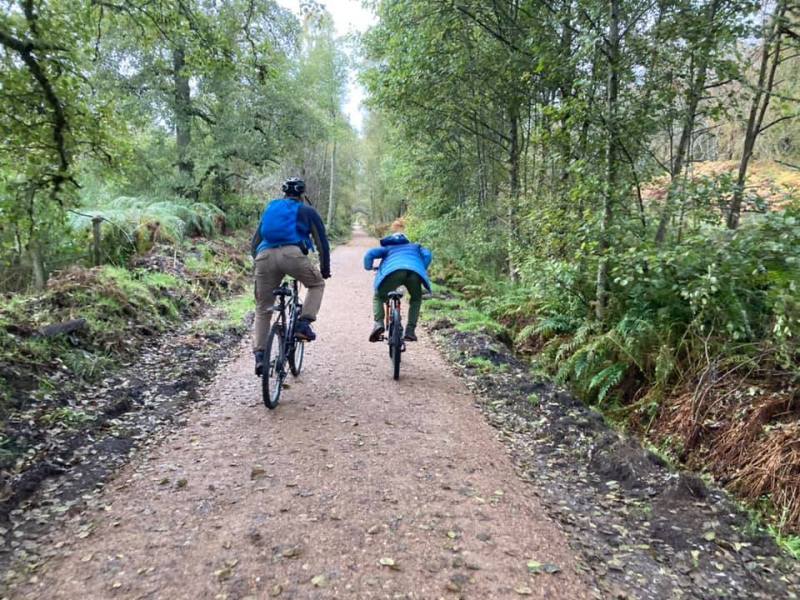 We’ve indicated below what sort of times you should allow between places of interest and suggested a schedule for how you could pace a day doing a Speyside Whisky tour by bike.