Well that’s another hum-dinger of a year over, hopefully, things will be better next year?

That’s what we said at the end of 2020, and things in 2021 were generally better. At least in terms of being able to travel around Scotland.

To give you an idea of how much we zoomed about Scotland last year, we created this Map with a pin for all the main places visited in 2021.

We’ve made some new discoveries, returned to some favourite haunts and sadly said “Goodbye” to several B&Bs that we’ve been recommending in our guides for over a decade.

But this Blog is all about looking back on the best bits of 2021. So let's get started!

July saw us return to the Outer Hebrides for a couple of weeks based on the Isle of Lewis.

The Outer Hebrides is blessed with magnificent beaches and most people will have heard of the superb long stretches of sand at Losgaintir and Scarista. But we were in search of beaches away from the crowd. So we took the long winding single track road that passes down the west coast of Lewis to the isolated township of Breanais.

There’s a gaggle of great beaches (is there a collective noun for beaches?) in this area of Lewis but you need to go all the way to the end of the road to find this wee gem at Mealastadh. The main part of the beach is easily accessed from the road and it had a few other visitors, But, with a little bit of wading, we discovered a hidden little inlet with its own perfect little beach of crisp white sand and not another living soul in sight. 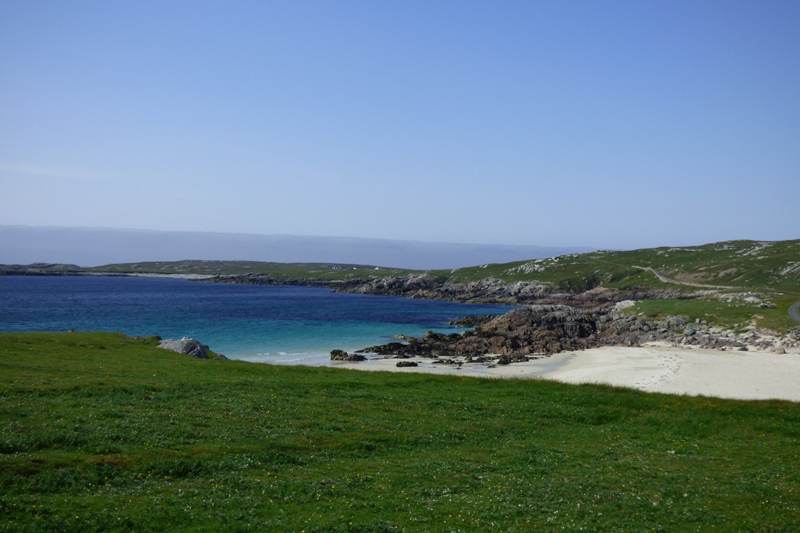 I specifically wrote “living soul” as this is a timeless place where the past and present feel like they intertwine. 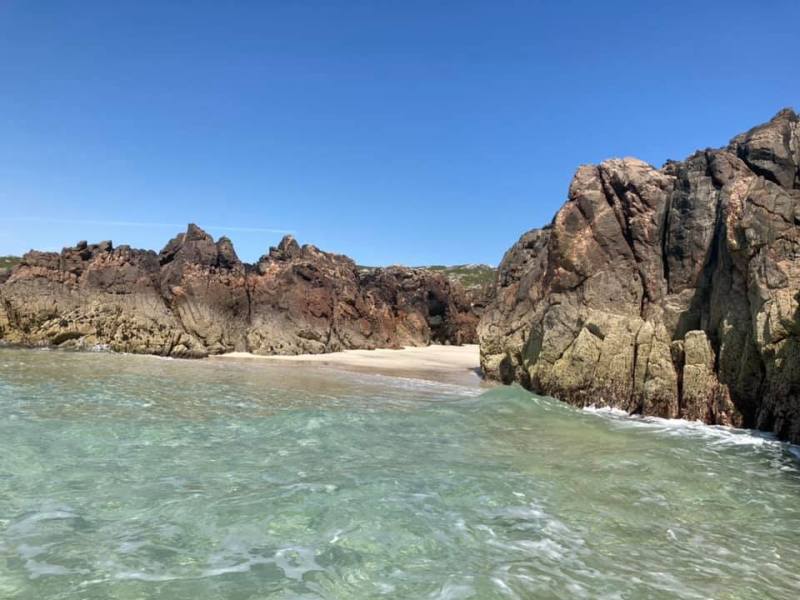 And ghosts might well linger at the south end of the beach for it is here that you find the scant remains of Tigh nan Cailleachan Dubha (Gaelic for “the House of the Black Women”). Local tradition has it that this was a nunnery and the ladies in black were nuns. There is also a legend that tells of the murder of a group of local men. Perhaps the widows of these men were the Cailleachan Dubha (Women in black). 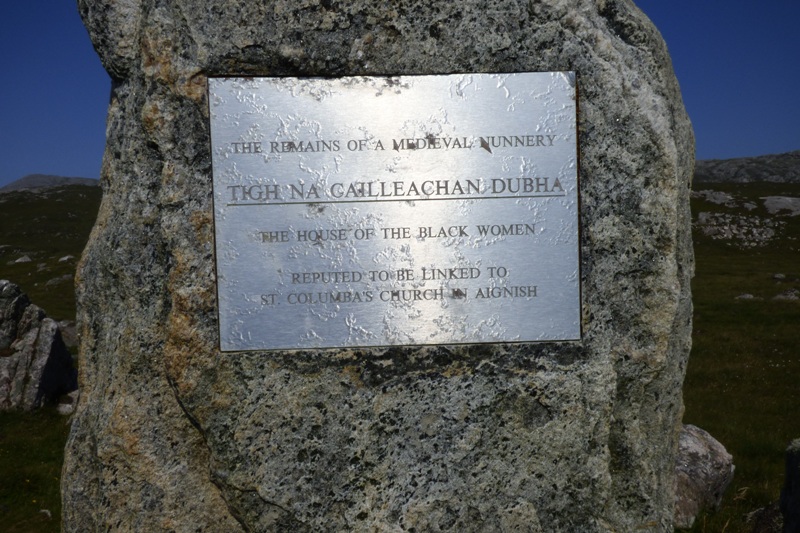 The Three Beinns route on the Isle of Arran stands out as our favourite hike in 2021 for the great views and the interesting features along the route.

Keeping a 10 yr old motivated is one of the challenges of hillwalking, but this route has several things to look forward to at different stages of the path

For example, there are several aircraft crash sites. The most accessible is that of a B24 Liberator which tragically ploughed into a ridge on Beinn Nuis in 1943 with the loss of ten lives. There are still identifiable items of wiring looms, undercarriage and what looks like bomb bay doors.

Near the summit of Beinn Tarsuinn, you find some unusual stacked rock formations which look like something Adrian Gray might have done. One of these outcrops has the profile of a crooked nosed old man wearing a bonnet and is known as the “Old Man of Tarsuinn”. 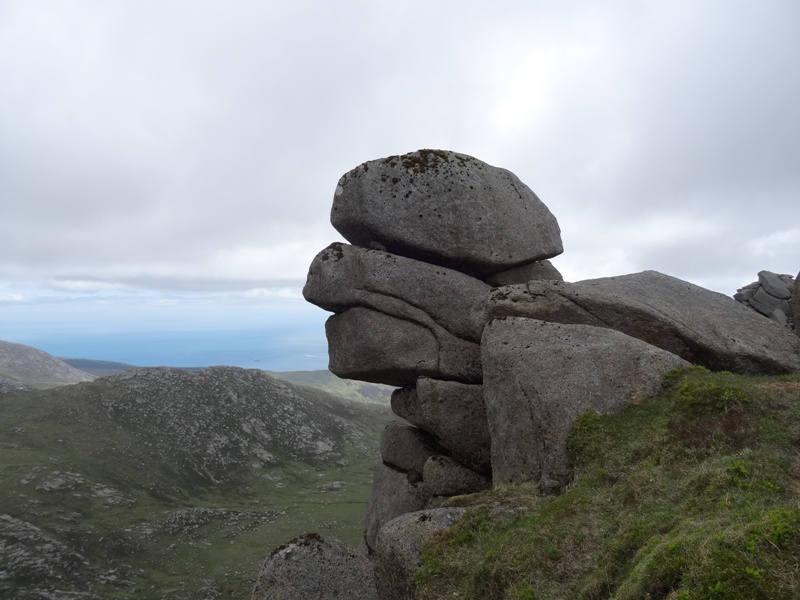 And on the descent from Beinn Tarsuinn to Beinn a'Chliabhain, there is a curious little shelter provided by a large curved slab of Granite that has formed a sort of covered walkway. But the best motivator is the prospect of a refreshing dip once the hard work is over. If you read our Blog from October 2021, you’ll see that we’ve started to research route options for cycling tours in Scotland.

Our Speyside Whisky tour by bike was a nice gentle route along a disused railway line, but the cycling trail that we liked best was a more arduous adventure in the Galloway Forest.

The idea for this bike ride came about when I was researching WW2 aircraft crash sites. Whilst looking at aerial photographs of a crash site in the Galloway Forest, I noticed that Loch Grannoch had a lovely beach of what appeared to be golden sand.

From the air, it looked like an idyllic spot for a picnic spot so we had to go exploring. The beach was indeed lovely and the nearby forest of Scots Pine trees made it look like it could be somewhere in the Highlands. The only downside was some dirty campers had been there a few weeks earlier and left all their rubbish behind. They apparently rammed their vehicle through a gate on the forest tracks to get up to the loch. It’s incredible how stupid and selfish some people can be. 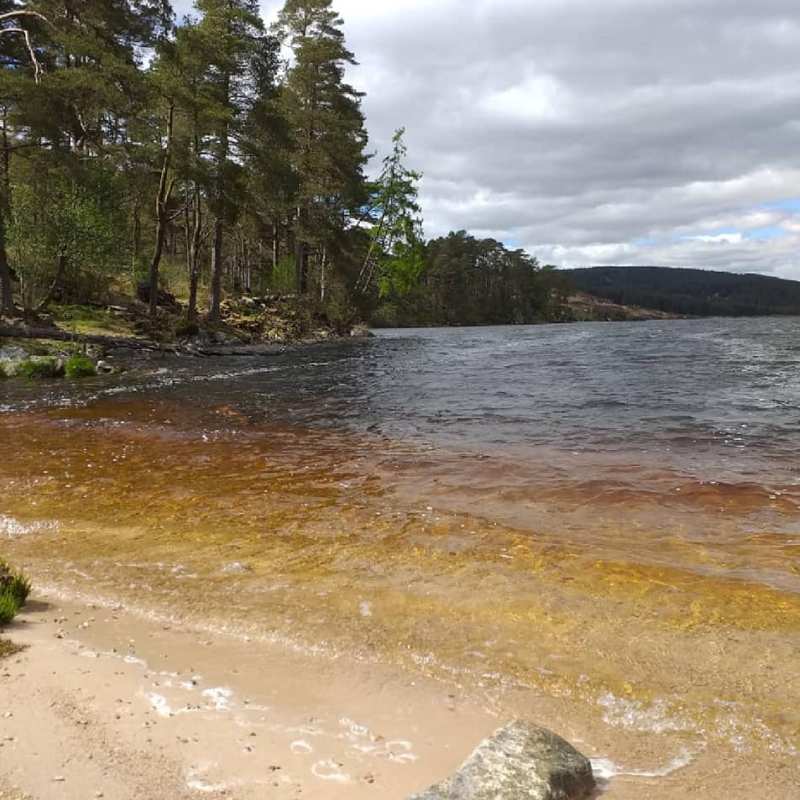 Findlater (pronounced like “Fin-letter”) is a crumbling ruin perched on a clifftop a few miles east of Cullen. The castle appears to be a part of the rock and nature is gradually reclaiming the walls of what would once have been an impressive fortress. 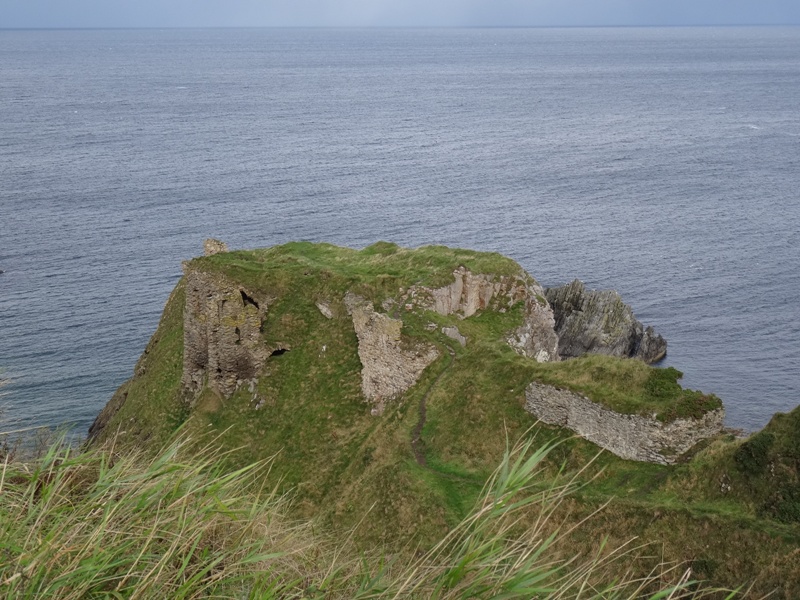 It reminds me a bit of Castle Sinclair to the north of Wick. Both castles stand on small peninsulas protected by steep cliffs. And both castles defended their approaches with drawbridges and forecourts. The thing that makes a visit to Findlater memorable, is the sense of danger. For this is an unmaintained ruin and there are no “Health & Safety” regulations in force here. 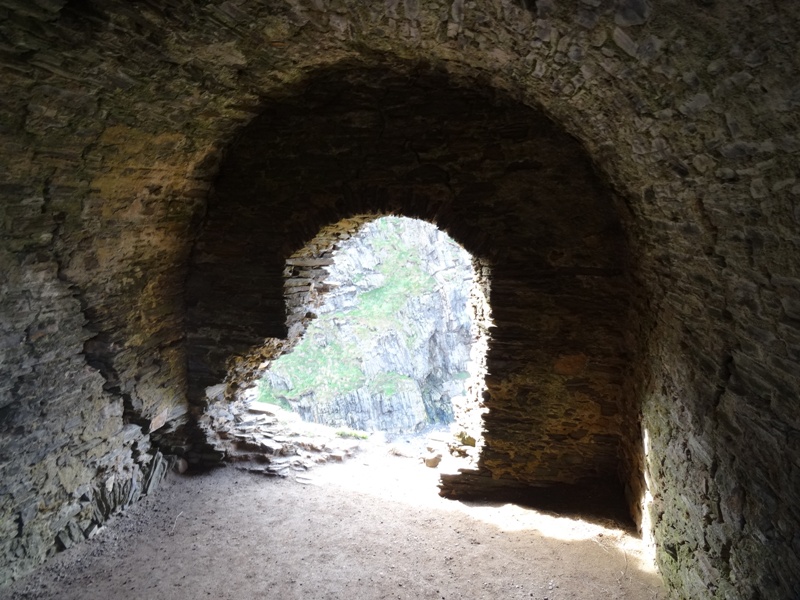 If you are feeling bold, you can follow a steep and slippy path down to the ruins where you will find the remains of a spiral staircase that takes you down into the castle vaults. There are 3 or 4 chambers that you can explore, but do exercise extreme care as one stumble might see you falling some 50 feet to the rocky shoreline below. We couldn’t agree on this one so we decided to list our individual favourites.

Junior went with Dun Eistean, the ancient stronghold of Clan Morrison on Lewis. It wasn’t the history of the place that appealed to Junior, it was the exposed, vertigo-inducing steel bridge we had to cross to get to the sea stack.

The bridge looks like a piece of scaffolding and, to enhance the sense of vertigo, it has an open grate floor to let you admire the 60-foot drop to the waves that crash through the gully below. 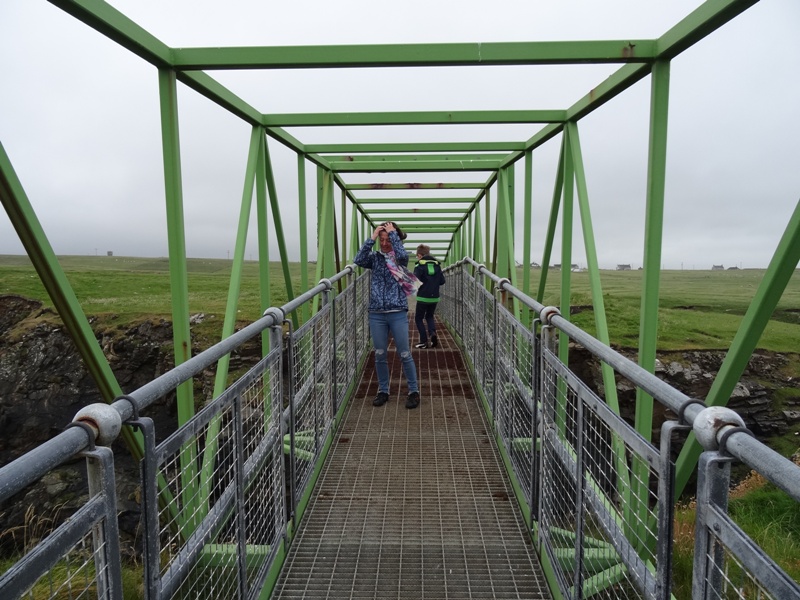 Aury’s pick for best new find was Craigmin Bridge which lies hidden in a forest just a few miles south of Buckie. It’s a fascinating bit of architecture accredited to Robert Adams who also designed the famous Culzean Castle in Ayrshire. 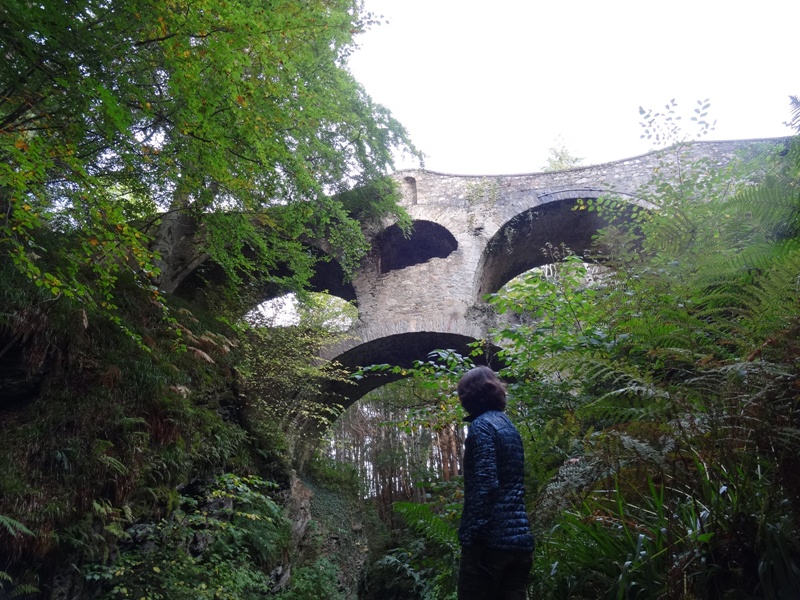 The bridge consists of 2 tiers of arches and is clearly inspired by Roman aqueducts. Sadly, this historical monument is looking rather neglected and has signs of subsidence. If it was better known it might be restored, but we fear it will be left to crumble.

My favourite find was the Neolithic rock art in Stronach Woods on Arran. And my reason for this choice is that it’s a place that I have passed so many times without knowing it existed.

The only reason I found it this year was because I was staying in a B&B on Arran and they had a new copy of the Ordnance Survey map for the island. My copy of the map had nothing marked on it, but the latest version indicated a “Cup and Ring Marked Rock” so I just had to go exploring. 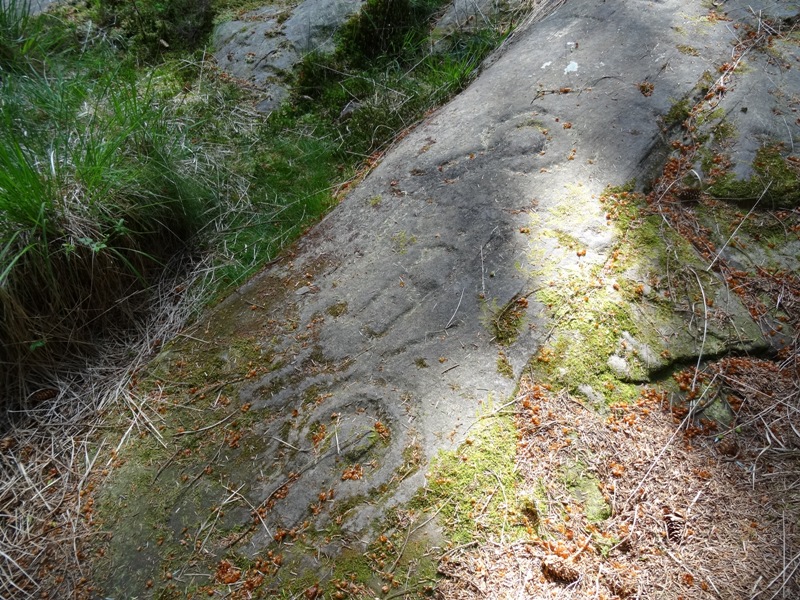 The site is not signposted from anywhere, but I followed my nose and eventually discovered a clearing amongst tall pine trees where there was a large area of exposed rock. The rock surface is mysteriously decorated with unusual “pear-shaped” designs that I’ve not seen anywhere else in this part of Scotland. 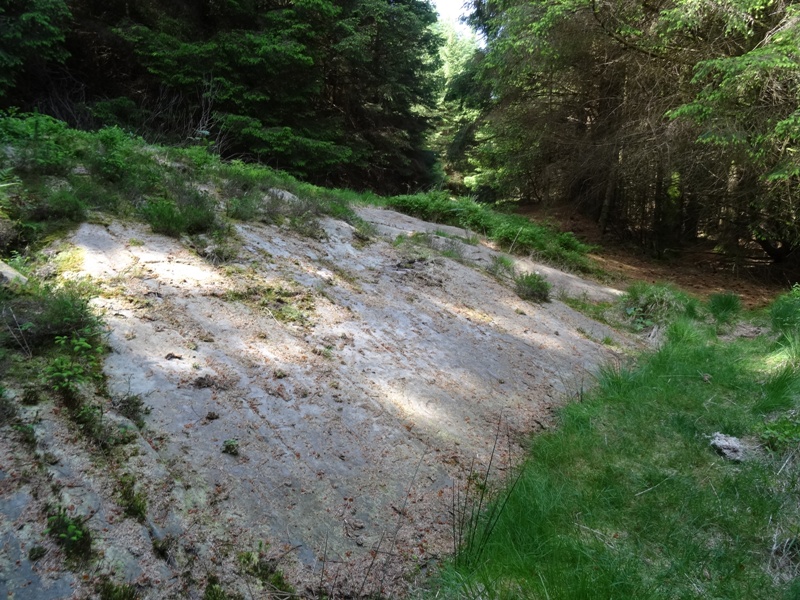 It’s not the best example of rock art in Scotland, but it merits an entry here because I’m amazed I’d never found it before and I’m glad I finally did.

This has to be a Sea Eagle that we spotted whilst driving out to Huisnis beach on the Isle of Harris. Fortunately, I had the big camera to hand and managed to grab some quick photos before the eagle flew out of range being hotly pursued by a squadron of seagulls. 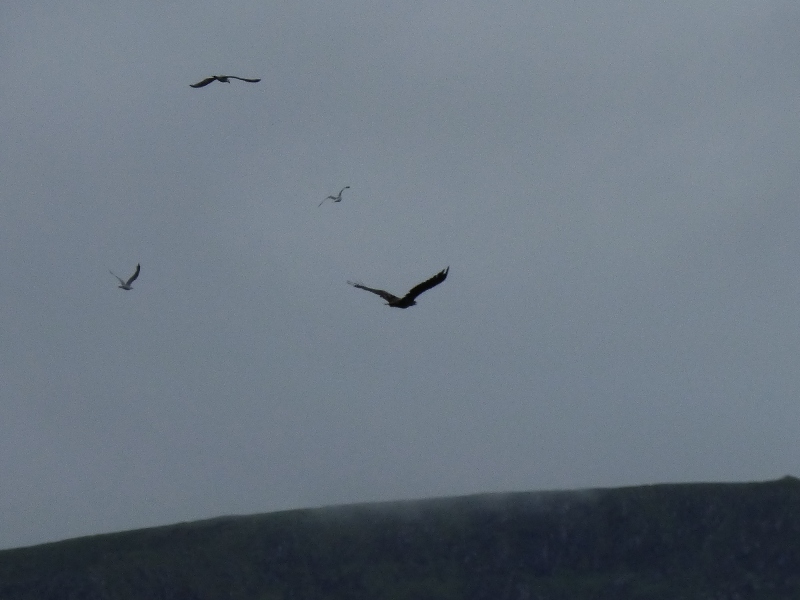 These photos don’t convey the awesome size of the Eagle’s wingspan which I reckon must have been close to 6 foot. 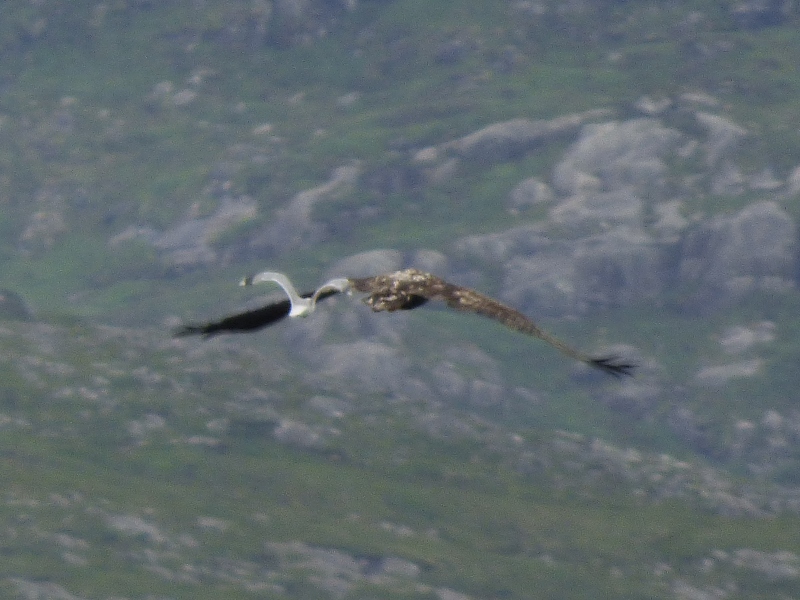 The favourite wild swimming spot of the Secret Scotland team was, by popular vote, on the Black River just a little bit upstream from Garvie Bridge. Our favourable memories of this dip are enhanced by the fact that it was a very warm July day. 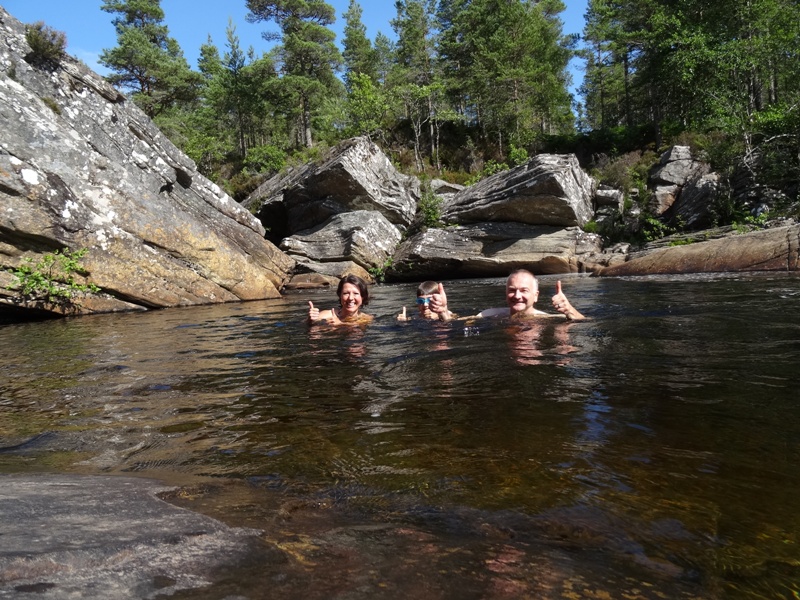 The pool we chose for our swim had the added advantage of a large smooth inclined rock that let you slide gently into the cold water in small increments that prevented you from going into shock.

This is an easy win for the Kilchrenan Inn which was so good that we’ve gone twice in 2021 because we loved the food so much. Junior is still raving about their Mussels. I was blown away by the taste sensation of their Crab Thermidor on toast. And Aury had an amazing Isle of Mull cheese souffle that was to die for.

It’s also a great place to stay and is a new addition to our recommended accommodation guide for the Oban area. We’d pick this place over the Three Chimneys on Skye. Apart from anything else, it’s a lot more affordable. We visit a lot of cafes during our travels. Coffee and Cake is a cornerstone of our diet when we’re on the road.

This means it’s hard to narrow this down to just one winner.

So we haven’t, and we give this award jointly to the Breakwater Cafe in Ness (at the north tip of the Isle of Lewis), and to the Old Post Office Art Gallery in Kincraig (near Aviemore).

We loved Breakwater Cafe because they do amazing pizzas and you just don’t expect to find such a great place to eat in a place like Ness which is pretty much at the end of a road. The Old Post Office is a wonderful lunch stop for a lot of reasons. First of all the decor is great and you can admire some beautiful original artwork as you dine. The menu is imaginative with influences of the Mediterranean so there’s always something interesting to try. But most importantly, the staff are super friendly folk and they’ve started to recognise us when we pop in.