Trying to keep a 5 year old entertained on a wet day in March is not an easy task, and March is a fairly wet month in Scotland. One thing that always seems to fascinate our son is moving water. Unfortunately, he doesn’t include rain in this category, but rivers, water wheels, bridges over rivers and variations of the above are all a source of fascination to him. Fortunately, this does give us some opportunities to keep him amused when the weather isn’t encouraging us to go hill walking.

Two places that always go down well are the old Mills at New Lanark and Stanley. On the face of it, these industrial museum might seem to offer very similar experiences, but they are really quite different and both worthy of a visit. New Lanark mill is arguably of greater historical significance as it was a social experiment with some revolutionary ideas about the relationship between workers and employers. 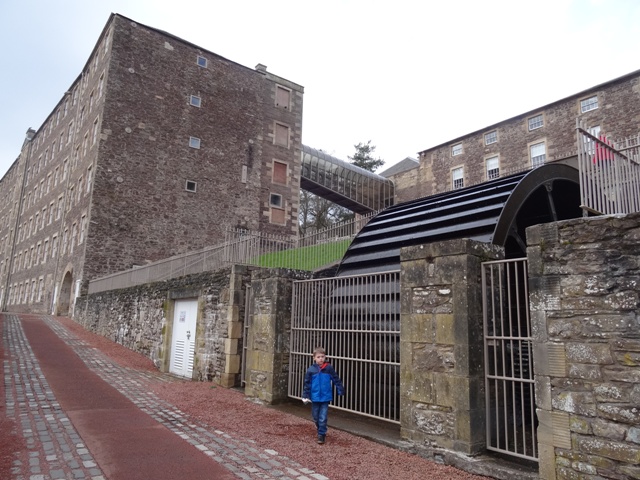 The mill was initially established in the 1780’s by a Glasgow banker, David Dale, and an Englishman, Robert Arkwright, who was a pioneer of mechanised cotton spinning. At New Lanark, they saw the potential to tap the energy of the River Clyde to drive the new machinery being developed by Arkwright. But the most interesting developments were the ideas of David Dale who sought to improve the lives of his workforce through the provision of proper housing, nutrition and education. A measure of the man’s reformative and altruistic views is that he continued to pay his workers wages following a fire which stopped production at the mill. 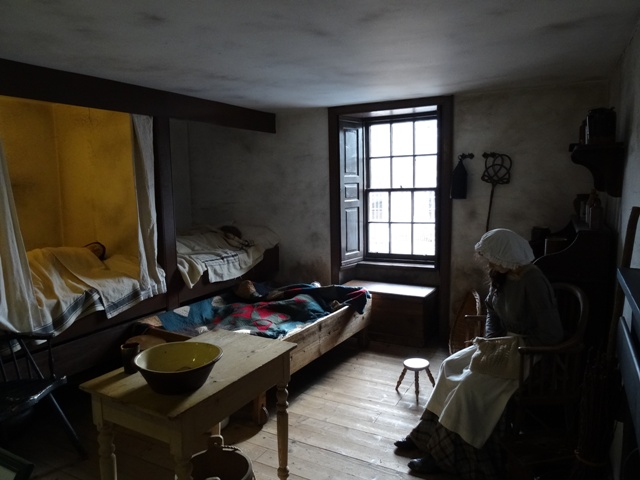 In 1800, David Dale sold the Mill to his son-in-law, Robert Owen and New Lanark entered and even more dynamic period of social reform. With such revolutionary ideas as crèche facilities, co-operative style shops for the workers, health care (albeit partially paid for from the workers’ wages) and the curiously named “Institute for the Formation of Character” where the workers could enrich themselves with extra-curricular activities that Owen approved of. It was all quite radical in its time, but also reflected social and egalitarian values that are inherent in Scottish culture.

When you visit New Lanark today your first impression will probably be that it is surprisingly hard to get to and you’ll wonder if they couldn’t have chosen a better site for the transportation of goods. The mill sits in quite a deep and steep sided gorge that is surrounded by attractive woodlands which largely hide it from view until you are quite close. The woodlands are largely a result of another Robert Owen initiative as he sought to provide his workers with a healthy verdant environment to relax in during their (by modern standards) relatively limited free time.

Despite its considerable size and functional design, the mill and its accompanying housing are a strangely aesthetic and appealing sight. So much so that many of the old millworkers houses and factory buildings have been converted to provide desirable modern homes, There’s even a hotel in one of the old mill buildings. 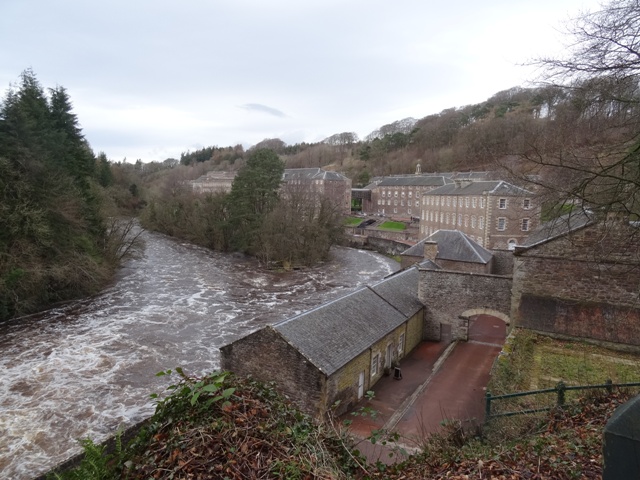 Visitors can take a tour which includes a sort of fairground ride (imagine the ghost train) that takes you through a presentation narrated by the friendly spirit of “Maggie”, a child worker from the days of Robert Owen. The exhibits give a potted history of the mill and the day to day life of the people that worked here. After the “ghost train ride” you are free to wander around the various parts of the mill that are open to the public. These include an area where you can see a loom that is still in use for producing cloth, recreations of mill workers' houses from the 1820's and 1940's, the village shop (complete with plastic food supplies), the schoolhouse and Robert Owen's house. As you might expect, the boss has a much nicer than his workers, but it is not as ostentatious as it could have been and seems quite modest in size by modern standards. 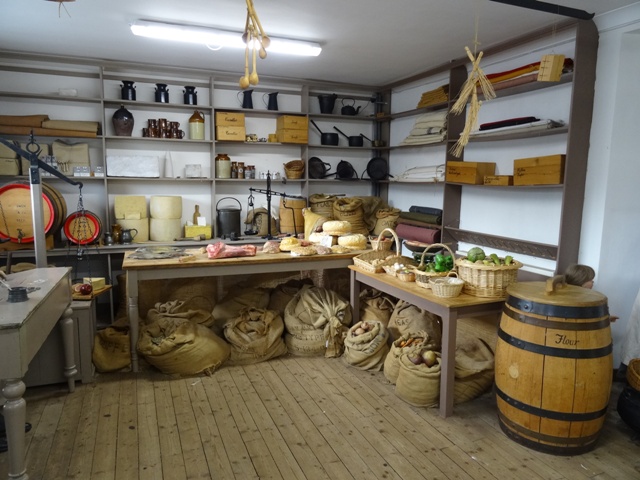 Stanley Mills, just a few miles north of Perth, has quite a few similarities with New Lanark and it has also enjoyed a new lease of life thanks to the re-development of its old factory floors as desirable upmarket residences. This Mill was also established with help from Robert Arkwright and, like New Lanark, a large segment of its early workforce was provided by Highlanders who were displaced from their lands during the Highland Clearances. 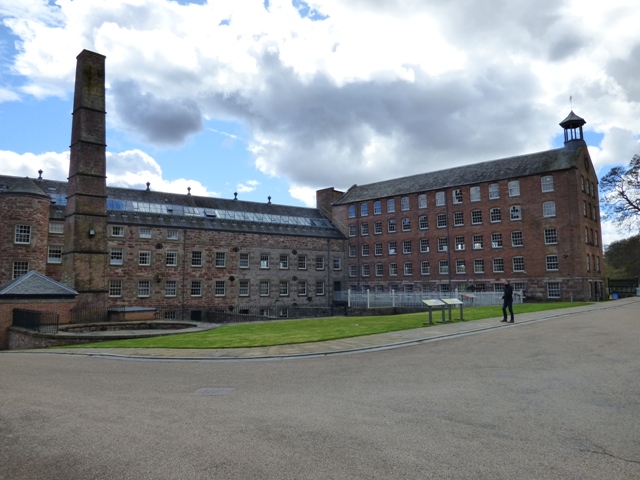 These mills continued to develop and evolve over a longer period than New Lanark so the style of the buildings is not quite so homogenous, but it is still strangely attractive as a place to live. As a tourist attraction, we found Stanley Mills more interesting and better presented than New Lanark. Where as New Lanark is more focused on the history of Robert Owen's social reforms, Stanley Mills goes into more depth about the evolution of mill machinery and what the working conditions were like in the factory. In addition to the expected displays about the history of the mill, there is a fun interactive area where kids (and grown ups) can experiment with the different designs of water wheels and turbines that would have powered the mill. You can also experience the deafening noise levels that workers would have endured for hours on end. Fortunately, you only have to put up with a few seconds of the mechanical clatter. 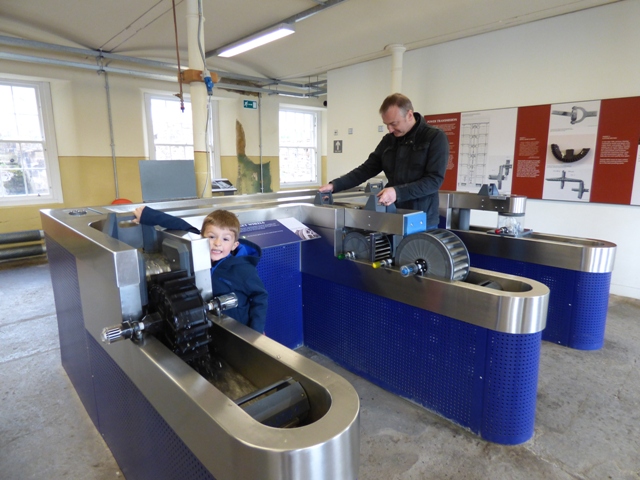 On a completely different scale, but still ticking the boxes for our 5 year old, is Preston Mill just outside of East Linton in East Lothian. The building dates from the 18th century and  has no straight walls or level floors. It looks like something that a Hobbit might live in, but amazingly this little mill was still operating commercially up until 1959. If you’re lucky, the curators will open the sluice gates and crank up the waterwheel so you can see the mill in action. It’s a wonderfully ramshackle collection of belts, pulleys and wooden cog wheels, but it works and makes you feel rather nostalgic for a time when life was simpler.

The mill is also enjoying a bit of fame as the place where they filmed the scene in “Outlander” where Jamie hid in the water. I’m not an “Outlander” fan, but some female friends tell me it was a good episode. 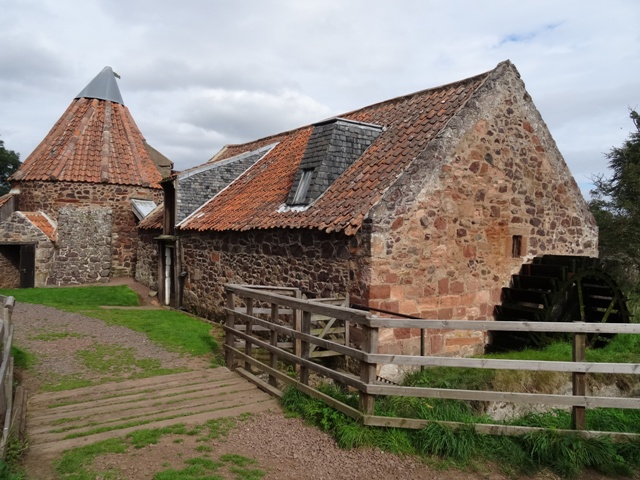