I started this month with a another visit to the Skye & Lochalsh area and ended it with a visit to Dumfries & Galloway. I was really quite amazed at how busy Skye was on a very wet and miserable week in early April. In relation to Skye, Dumfries & Galloway was practically deserted and this really isn’t a fair reflection of the merits of the two areas as the South West corner of Scotland has a lot going for it.

When it comes to castles, the options in Dumfries and Galloway easily beat the offerings on Skye. Several centuries of being on the front line of the conflict between Scotland and England has left a legacy of defensive strongholds. Many of these castles were built to defend and control movements along the Solway coast, but the reclaiming of coastal marshland has left some of these castles quite distant from the sea now.

If asked to pick a favourite we would probably nominate Caerlaverock as it has several novelty factors, the coolest of which is its moat. Lots of Scottish castles would have originally had moats, but the only other ones we can think of that still retain water filled moats are Duffus castle and Rothesay Castle. Caerlaverock has some other unusual features that make it worth a visit. The most obvious being that the castle is 3 sided, a unique feature in Scotland. This may have been an experiment in maximising the fields of fire of a small garrison, or maybe it was just a cost-cutting measure as 3 walls should be cheaper than 4. The defences of the castle were tested many times and it briefly faced the full brunt of King Edward I’s invading army in 1300, but the defenders capitulated quite quickly as the attackers came equipped with trebuchets. An example of which is on display outside the castle. 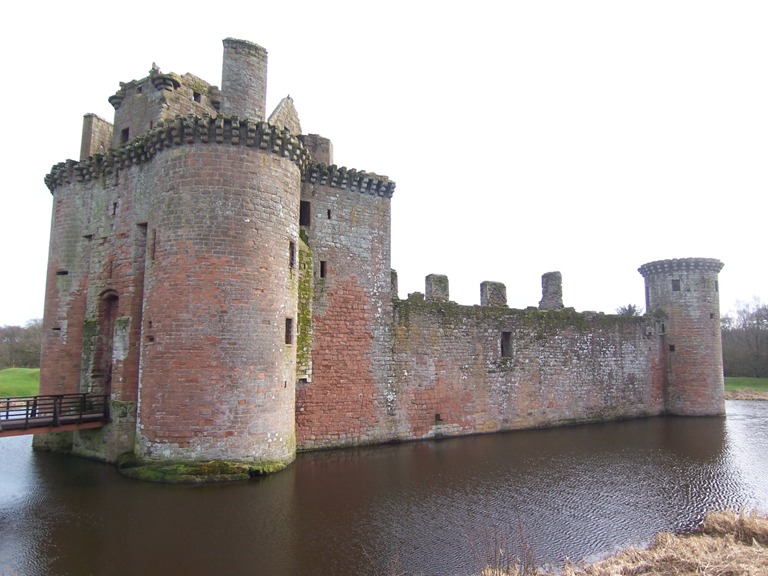 Given the fame of Iona Abbey as the home of Christianity in Scotland, it might surprise you to learn that during the early 5th century, the village of Whithorn was the headquarters of St Ninian’s Christian mission in Scotland. The oldest Christian memorial, a carved pillar stone, was found here and Whithorn was once a major centre of pilgrimage for commoners and Kings. Nowadays, it is hard to imagine how this sleepy little backwater village could once have been a hub of Medieval activity. 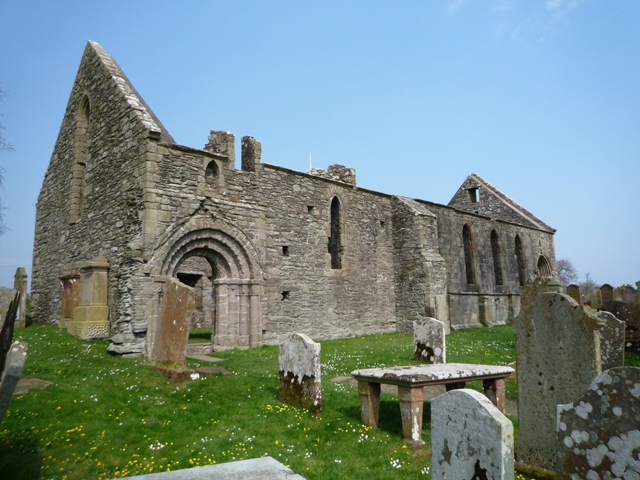 The importance of Whithorn as a place of pilgrimage may also explain why the Solway coast has so many Abbeys. Travelling from Dumfries along the coast to Stranraer, you can visit the remains of Sweetheart, Dundrennan and Glenluce Abbeys. Dundrennan was established in 1142 and is the oldest of the 3 ruins. Its main claim to fame is that it Mary Queen of Scots rested here during her last night in Scotland in 1568 before fleeing to England in the false hope of receiving sanctuary from Elizabeth I. 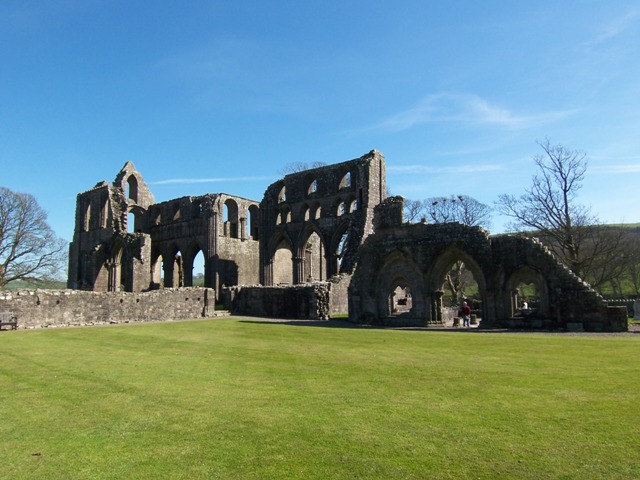 Sweetheart Abbey is the youngest (built around 1273) and most complete of these three. Enough remains of the Abbey for the visitor to get some sense of the scale and layout of the building in its original state. The same cannot be said of Glenluce abbey where very little remains to give any indication of what might have once stood here. The only fully intact room is the “Chapter House” which has great acoustics. Despite it ruinous state, we find Glenluce the most attractive place to visit as the setting is so peaceful and serene that it seems natural to want to build an abbey here. The abbey also has an interesting little visitor centre with displays of various items discovered during archaeological digs. These digs revealed a surprisingly sophisticated network of ceramic pipes providing a “plumbed” supply of water around the abbey. 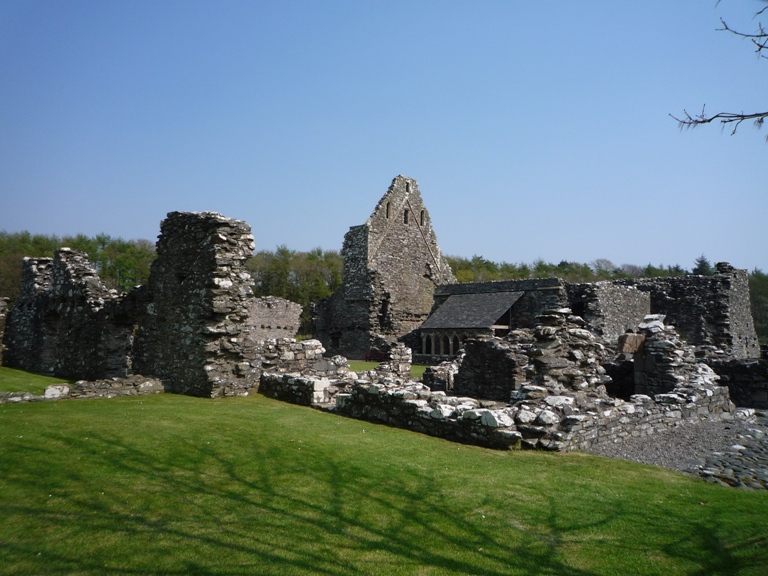 Talking of serene places, Dumfries & Galloway boasts some great gardens. It would take too long to list them all so we’ll just mention our favourites which are Logan Botanic Gardens and Portrack Gardens. The Logan Gardens stand out as they have an area that has been laid out to try to re-create something akin to the woodland environments of New South Wales. We’ve never been to Australia, but on a hot sunny day in Logan Gardens we can half close our eyes and let the smell of eucalyptus trees transport us somewhere else. All it needs is some Koala bears. 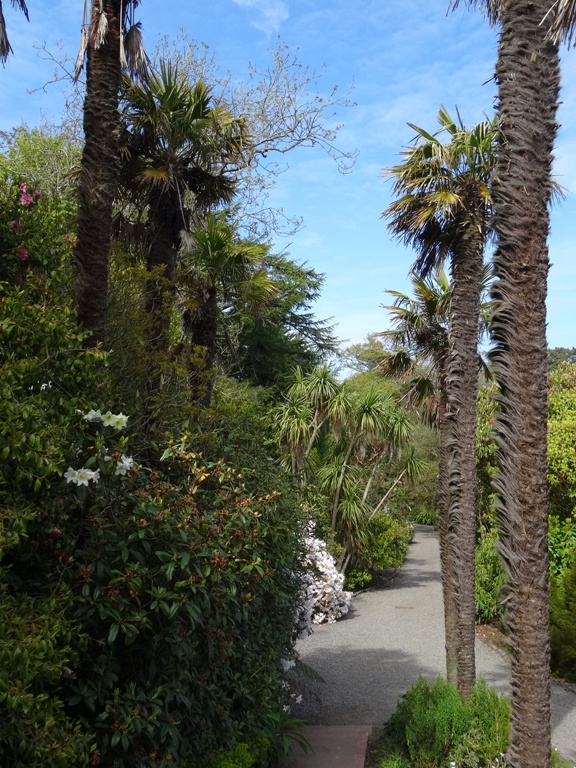 A very different horticultural experience can be had at Portrack gardens, but this place is only open once a year on one day in late April / early May so it is often very busy and difficult to schedule into a tour of Scotland. Portrack is the creation of the wonderfully whacky artist Charles Jencks who has done several other projects around Scotland of which the gardens and the “Striding Arches” (also in Dumfries and Galloway) are perhaps his best known. The correct and full title for Portrack is “The Garden of Cosmic Speculation” and there are all sorts of different themes going on here. This is landscaping on a grand scale with distinctive “Snail Mounds” and swirling water features. It is a bit reminiscent of the children’s TV show called “Teletubbies”, if you’ve ever seen that. 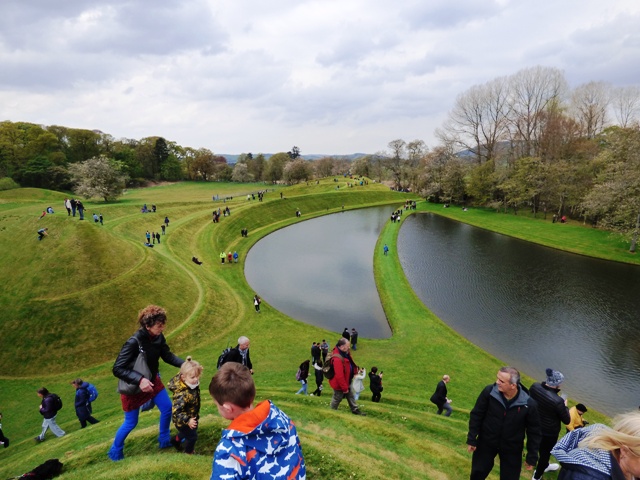 Something that you probably don’t associate with this part of Scotland is whisky, but the area now boasts 2 distilleries. For a long time Bladnoch was the only distillery around here and it holds the title of being the most southerly distillery in Scotland. Unfortunately, this novelty factor has not brought a lot of commercial success for the distillery, but it now has a young Australian in charge and he is doing his best to put Bladnoch back on the whisky map with some sexy marketing campaigns. The latest distillery to open in the region is actually 187 years old, but it closed some 90 years ago and was just re-launched in 2014 after a major restoration. We’ve yet to visit, but we’ll maybe wait until we can sample something that’s matured a bit longer. 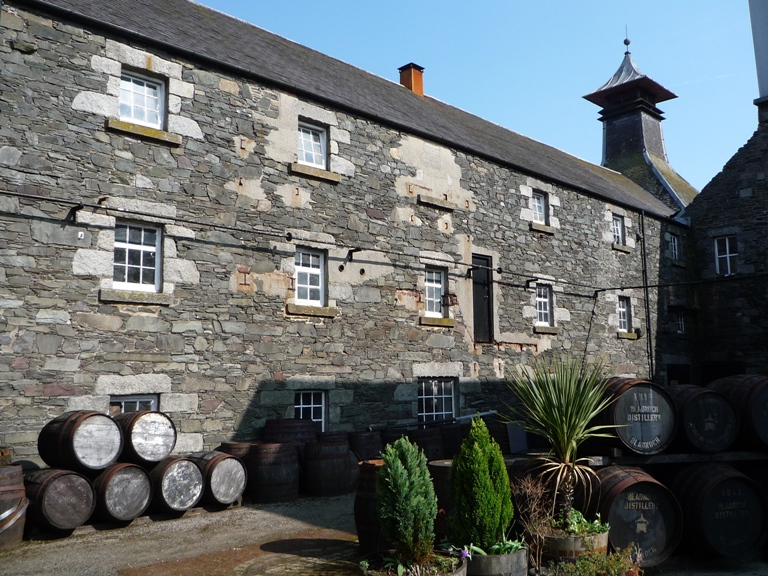 If you’re not a fan of the hard stuff, you might prefer a visit to the ice cream factory at “Cream o’Galloway”. When we first visited Cream o’ Galloway it was very much a farmhouse industry and you could watch the workers on the production lines. A particularly entertaining stage of the production line was the filling of the ice cream tubs. The ice cream flowed from a big “tap” around which 4 workers were flailing their arms as they tried to catch ice cream in tubs whilst simultaneously struggling to separate stacks of new tubs waiting to be filled. It is all much more professional now, but the ice cream is still as delicious. The cinnamon flavour version is especially good! 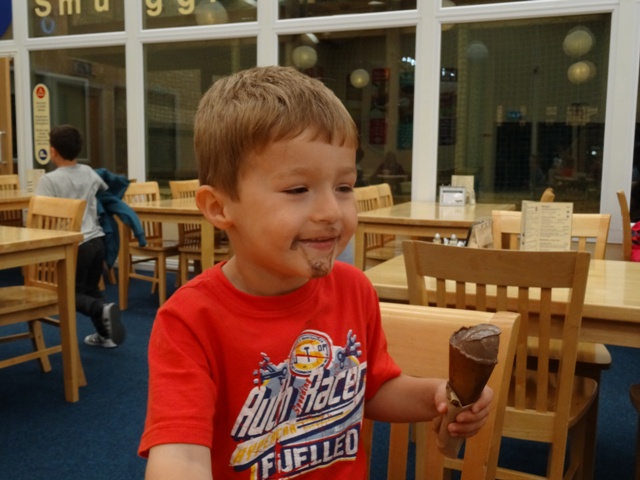 After piling on several ice cream scoops worth of calories, you may feel the need to take some exercise and the Galloway Forest Park is a great place for this. The Galloway hills are not as rugged, or dramatic as the mountains of the Highlands, but they can deliver the same sense of wilderness and isolation that people go in search of when they head to the north of Scotland. The highest peak in this part of Scotland is the “Merrick”. I admit that I had to climb it three times before I got a clear view from the top, but I hope you can see from the video that it was worth the effort,

Fortunately, I have enjoyed lots of other good walks and cycle trails in the Forest Park and have the photos to prove it! 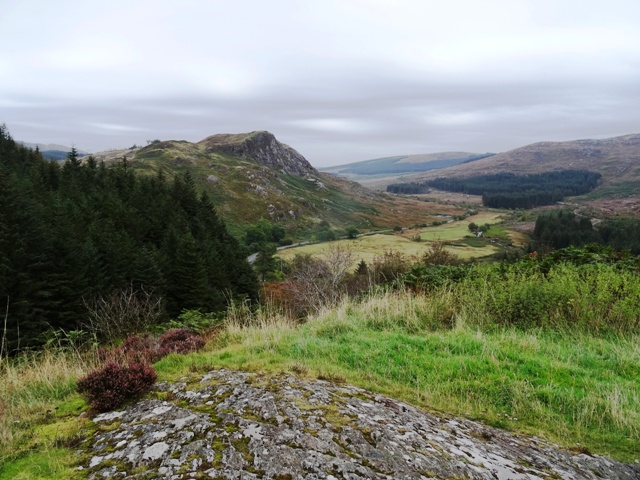