"Great Castles without the Crowds"

My inspiration for this month’s Blog came from a recent visit to Aberdour Castle in Fife. This used to be one of those hidden gems of a castle that you could easily drive past without knowing that it existed, but if you stopped to explore you would be delighted by how many interesting features it has. I say “used to be”, because the “Outlander” effect has now come to Aberdour and it is no longer the overlooked corner that it was. That said, Aberdour is still relatively quiet when compared with places like Doune Castle which has become a big pull for “Outlander” fans looking to find Castle Leoch.

Aberdour, before its brief appearance in “Outlander” as a Benedictine Monastery, was better known as being one of the oldest standing castles in Scotland with sections dating back to the 1100’s. The castle also has a rare painted ceiling dating from the 1600’s and elegant terraced gardens. So there is lots here for the historical buff, but if you want to find interesting castles away from the crowds we’d recommend you consider the following: 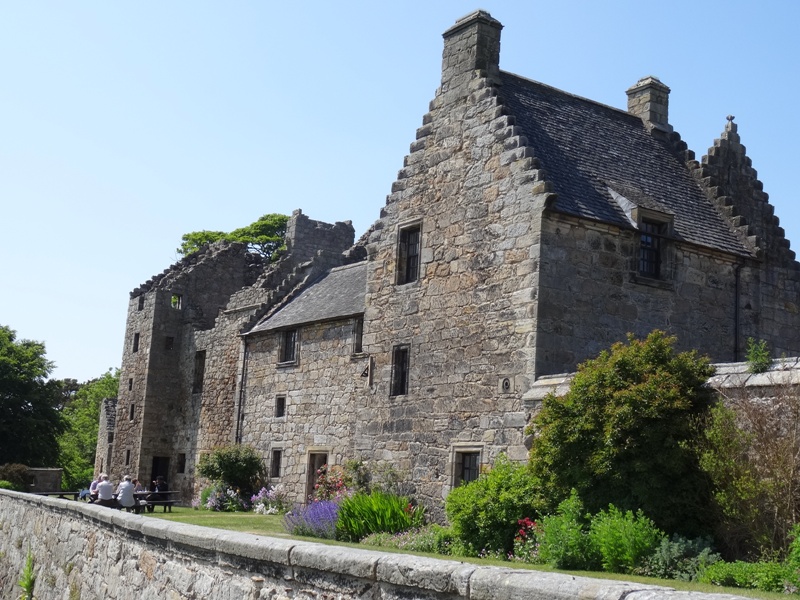 Huntingtower Castle - It is surprising how relatively overlooked this very complete castle is given that it is just outside of Perth and stands so close to the busy A9 that so many tourists follow when heading north to Inverness and the Highlands. Huntingtower is actually formed from 2, originally separate, tower houses that were built around the 15th / 16th Century. The gap between the 2 towers was only 10 feet, so they linked the buildings with a centre section in the 17th Century. In estate agents terms, Huntingtower castle is what you might call “semi-detached”.  Like Aberdour, Huntingtower is one of the few places that retains an original painted ceiling. It also has some of its original painted plasterwork which is decorated with an unusual hexagonal pattern that creates a sort of 3D effect. Very avant garde for the 17th century.

One of the things that hampers the promotion of Huntingtower as a tourist attraction is the limited size of the car park and the narrow access lane to the castle. This is not a place that coach parties will be visiting unless the driver is very confident about his reversing skills. The castle has undergone some sensitive restoration work and, from the outside at least, looks like it could still be lived in as it is completely wind and water tight. It is so complete that it sometimes gets booked as a venue for weddings. 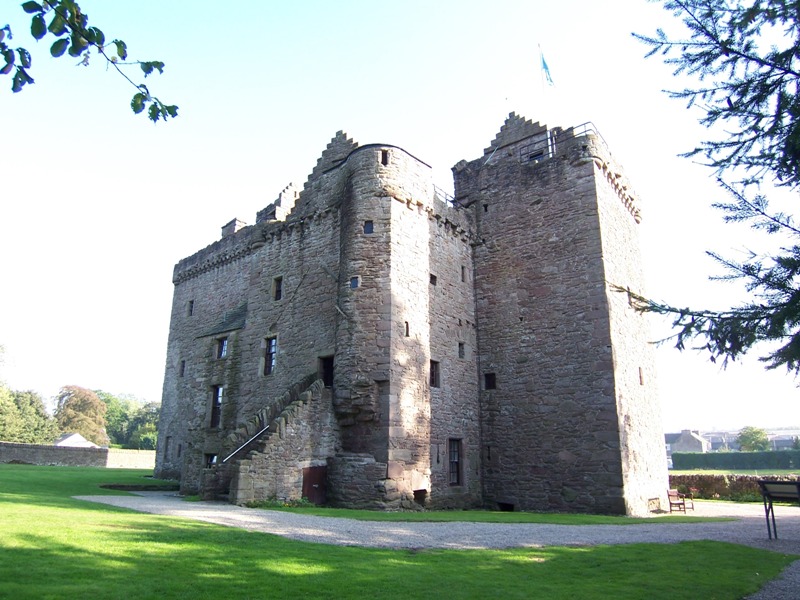 Elcho Castle - This is another hidden gem just a few miles east of Perth, but in a rural location that you’d only find if you set out looking for it. If you stumbled across Elcho castle without intending to find it, you would be very lost as it is located at the end of a side road that involves driving through the middle of a farmyard. The adventure of finding this castle all adds to its appeal and it’s one of the best value for money admission prices you’ll find.

If you are travelling with young children, Elcho castle will keep them entertained for quite a while as it is a Labyrinth of rooms and  spiral stairways with lots of “nooks & crannies” to hide in. In fact, there are so many stairways and permutations on how you get around the castle that it becomes a bit disorientating. You’ll soon find yourself entering a chamber from a different angle and wondering if you’ve been there before.

The other feature of this castle that captured our 7 year olds imagination was a game of “Find the Cludgie” (a “Scots” word for toilet). The owners of Elcho castle maybe suffered from incontinence issues as there are 9 water closets liberally scattered around the castle. The generous allocation of toilets was more likely intended to impress guests as it seems that Elcho was primarily used by the Wemyss family as a country get-a-way for entertaining important visitors. Mary Queen of Scots being among the famous VIPs to visit Elcho, but she did get around a lot and also made an appearance at Huntingtower Castle. 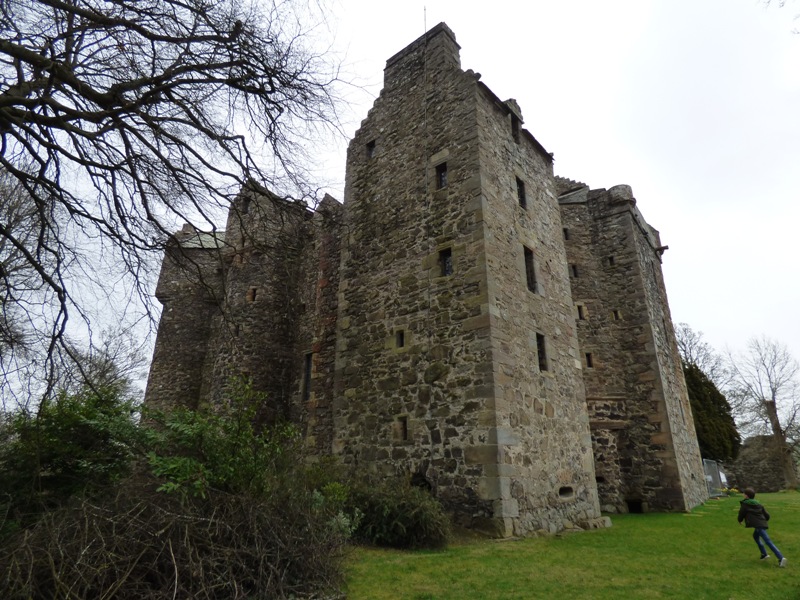 Tioram Castle - We’ve mentioned Tioram Castle in a previous Blog and it is a favourite place of ours. It is also a  place that Winston Churchill rated as “one of the most beautiful” that he knew. Up until 1998, it was possible to go inside the castle, but then it was deemed a”dangerous building” by the Highland Council and internal access has been prohibited ever since.

Interestingly, the owner of the castle wanted to restore the building to its original state, with the upper floors being used as a private residence whilst the lower levels would house a museum. Unfortunately, this expensive project has never progressed due to a dispute over public access to the building. The private developer wished to limit public access to ~8 weeks of the year, whilst Historic Scotland insisted that it should be accessible by the public all year round. We understand the reasoning on both sides of this argument, but it seems better to have the castle restored with limited access than to continue a stalemate situation where the preservation of the castle suffers. After all, Eilean Donan and Duart castle are both 20th century restoration jobs and they’ve become hugely important attractions for Scottish tourism.

If eventually restored, it will be the first time that the castle has had a roof on it since 1715. Allan, the 14th  Chief of the MacDonalds of Clanranald, recaptured the Clan castle from Government troops just before he set off to fight for the Jacobite cause in the 1715 Rebellion. He had a vision that he was going to die on this campaign and decided it was better to burn down his castle than risk it falling into the hands of the Government troops. 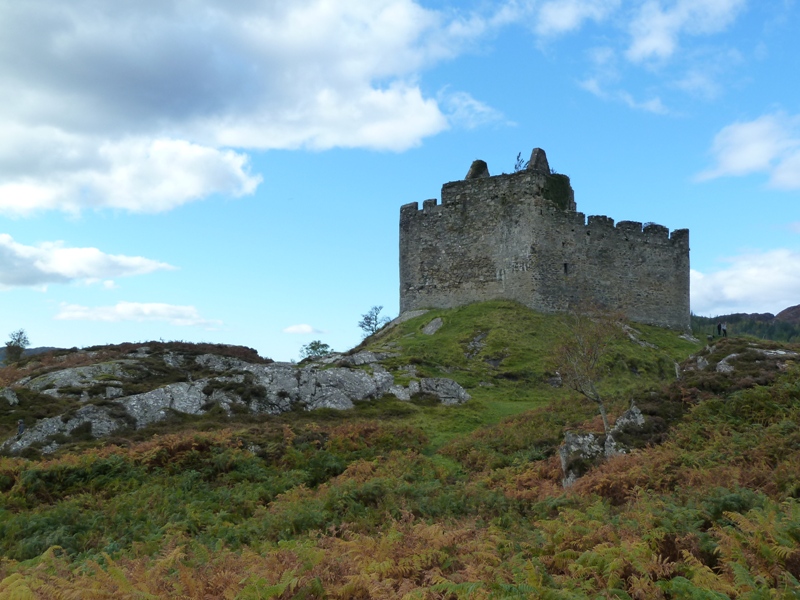 Skipness Castle - Tucked away at the north end of the Mull of Kintyre guarding the Kilbrannan Sound that lies between the Kintyre peninsula and the Isle of Arran, Skipness is a castle with an intriguing past that reflects some of the complexity of Scotland’s history. The castle is quite an impressive structure with a well preserved tower house in one corner and a large curtain wall forming a strong defensive enclosure. Like many castles, it grew in size from the 1200’s to the 1500’s and the different periods of construction interweave and overlay so it is hard to make out which parts date from when.

At the time of its construction, Skipness Castle stood in a part of Scotland that was controlled by Norway and its owners, Clan MacSween, sided with the Norwegian King Haakon when he decided to go to war against the Scots. This was a bad idea as the Scots kicked some Viking ass at the battle of Largs in 1263, Consequently, Clan MacSween found themselves out of favour and Clan MacDonald moved in. They made themselves comfy here for a couple of centuries, but then they got a big too big for their boots and and started to have disputes with the King of Scotland who set about bringing them down a peg or two. This resulted in the castle being taken over by the MacDonald’s main rivals, the Campbells, who had a knack of picking the winning side in a fight.

The Campbells bulit what is now the most complete part of the castle and that is the tower house which was extended upwards by them in 1500's. Interestingly, the tower house remained in use as servants' accommodation up until the 1800's when the Campbell family moved into their more comfortable country house next door.

The tower house has been partially restored with floors and a wooden staircase that takes you up through the several interior levels to a spiral staircase that leads out onto the parapet of the tower. From here you get great views over the Kilbrannan Sound towards the mountains of Arran and you can distinguish Lochranza village on Arran where the MacSweens built another castle to ensure their control of movements through the Kilbrannan Sound. 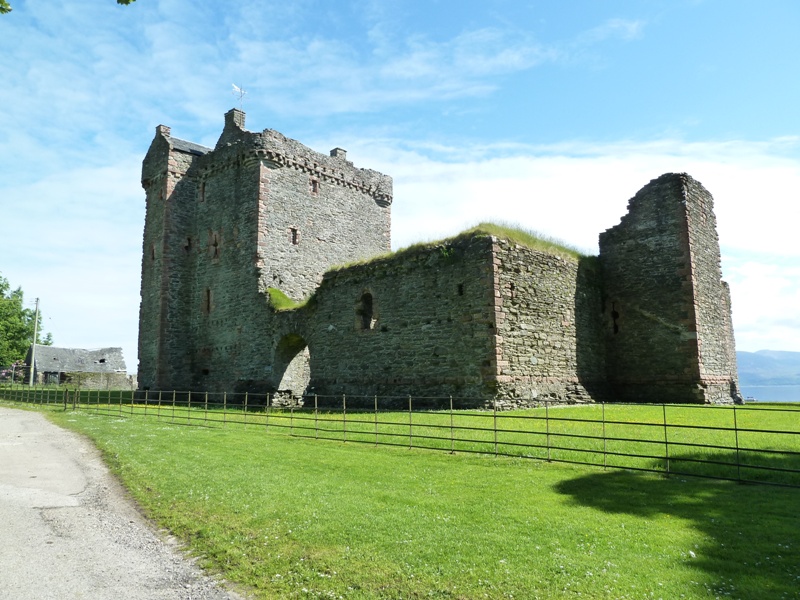 Innischonnel Castle - this castle stands on a little island close to the south / east shore of Loch Awe. It is a ruin, but from the outside, it looks almost complete if a bit overgrown with ivy and other vegetation. The impressive thing about this castle is the very neat masonry work which is particularly noticeable in the crisp edges of the corner stones.

The castle dates from the early 1300’s and is one of the first Clan Campbell strongholds on Loch Awe. Back in the 14th century, Loch Awe would have been an important highway through the Highlands when it was faster and safer to travel by boat than to follow trails through the woodlands surrounding the loch. An interesting part of Innischonnel’s history is that it was used by the Lords of Argyll as a sort of Alcatraz style jail for their prisoners.

The only way to get a close up view of Innischonnel is by boat, or from the twisty little B840 road along the shores of Loch Awe. Even if you do drive the B840, and it is a challenging little road, there’s a good chance you’ll still go past the castle without noticing it as it is hidden by trees and you only get the briefest glimpses. I do have some poor photos of the castle from the road, but I’ll add some better ones after our next trip.

In the meantime, here's a link to an aerial video of the castle.