We’re having a heatwave... a tropical heat wave... yep, winter is over and the Thermometer has stayed over 20C for most of the last week of May. In Scottish terms… that is a “Heatwave”. Readers from some foreign climes may scoff at anyone considering 25C to be hot, but for most Scots that’s our upper operating temperature limit and anything hotter makes us feel a bit “crabbit” (short tempered).

At Secret Scotland HQ the problem is further compounded because the window is jammed shut and we have to work in a stuffy office whilst looking at the sunshine in the fields outside. Inevitably, this leads to a bit of daydreaming about places we could head off to for a chilling dip with a nice view and a cool beer. This is just a short list of some of the places that came to mind.

“Blue Pool” in Glen Rosa, Isle of Arran - This was our first choice, but it does involve a ferry ride and a wee hike to get to. On the upside, Glen Rosa is a bit of a sun trap and is angled in such a way that it is usually sheltered from the prevailing south westerly winds. There are several good plunge pools along the River Rosa so you can usually find your own secluded wild “Jacuzzi”, but the pool that you really want to get to is the “Blue Pool”. It’s easy to identify as it has a distinctive large boulder sat next to it and the waters do have a very inviting bluish / green tint. The pool is deep enough that you can “bomb” into it and this is usually the best way to enter the water as it gets the shock over fast.

“Falls of Pattack” near Laggan - These falls aren’t far from the A86 road that crosses the Highlands from Spean Bridge to Newtonmore, but you won’t find them unless you are looking for them. If you pull off the road at the Druim an Aird car park, you will only have a short walk through mature trees to find shady gorge where the River Pattack tumbles between large rock outcrops into a large pool that is wide enough to let you get some proper swimming exercise. Alternatively, you can spread your travel rug out around the edges of the pool and cool your bottles in the shallows. If you feel the need to work up a sweat before hitting the pools, there is a 3 mile circular path that climbs from the falls to the remote abandoned village of  Druim an Aird. 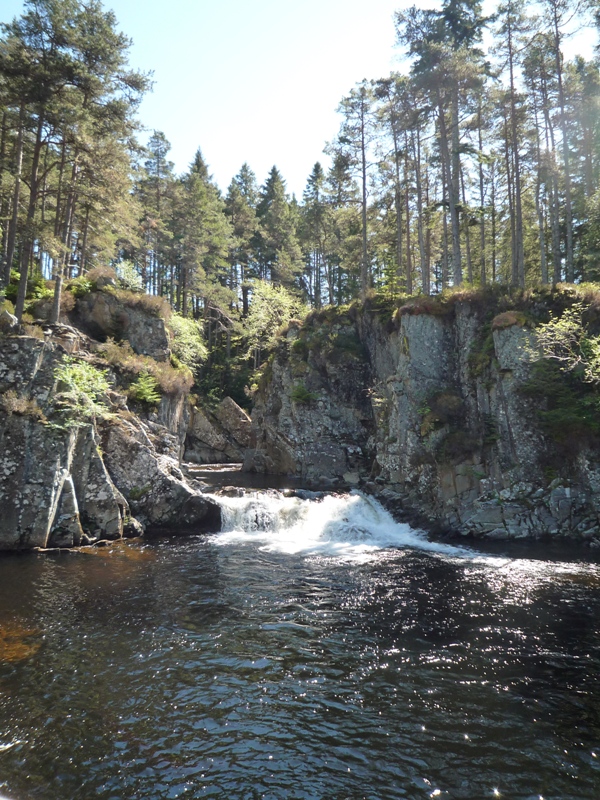 “Feshiebridge” near  Kincraig - The A9 is a road that we’re not big fans of. For sure, it is the quickest way to get from Edinburgh to Inverness, but it is a road that bypasses lots of great little places. As a result, the majority of tourists blast through a part of Scotland that has some hidden gems. So next time you’re stuck on the boring A9 approaching Kingussie, you might want to consider a small detour to Feshiebridge. Exit the A9 at Kingussie and then follow the B970  past Ruthven Barracks. After approximately 9 miles on the B970, the road dips down to cross a sturdy 18th century stone arched bridge that crosses the River Feshie. On the south side of the bridge, you will find a wooden gate that leads through to a picnic spot above a large pool that is great for a swim. If you are lucky, and we have been on 2 occasions, you might even catch a glimpse of salmon resting in the rock pool before starting their epic journey upstream through the cascades to their spawning grounds. 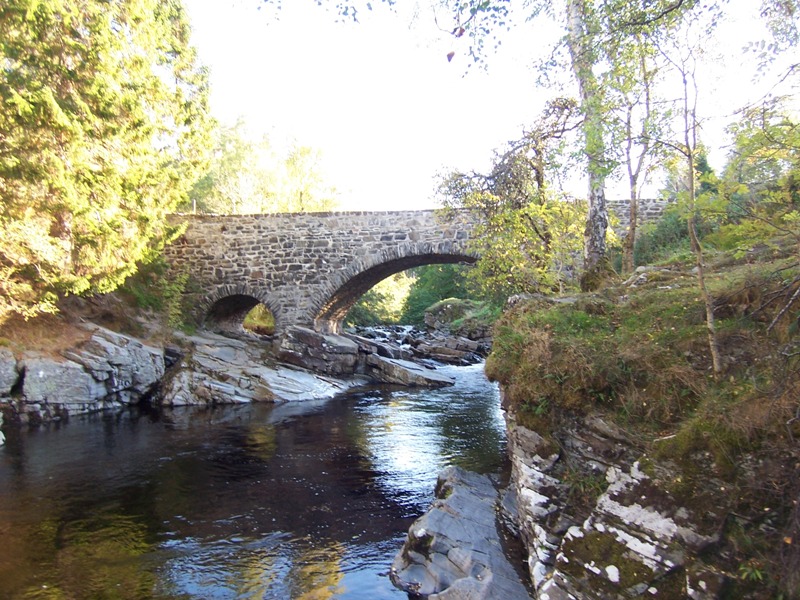 “Grey Mare’s Tail” near Newton Stewart - This is not to be confused with the more famous “Grey Mare’s Tail” near Moffat. In terms of scale, this one near Newton Stewart is more of a Shetland Ponies tail whereas the waterfall near Moffat is really quite spectacular. What this place does have in its favour is a secluded spot with a nice deep pool. Depending on your levels of enthusiasm, you can take a longer attractive woodland trail to get to the waterfall, or you can do it via a short climb from the main car park on the A712 between New Galloway and Newton Stewart. The car park is easy to find as it is just between a Wild Goat Park enclosure and the distinctive hilltop monument that commemorates Alexander Murray. Murray started life as a shepherd, but went onto become a Professor of Oriental Languages at Edinburgh University.

If you do the longer circuit to the Grey Mare’s Tail, your route will take in Murray’s monument, some lovely sheltered woodland paths and a series of specially commissioned “art” projects. 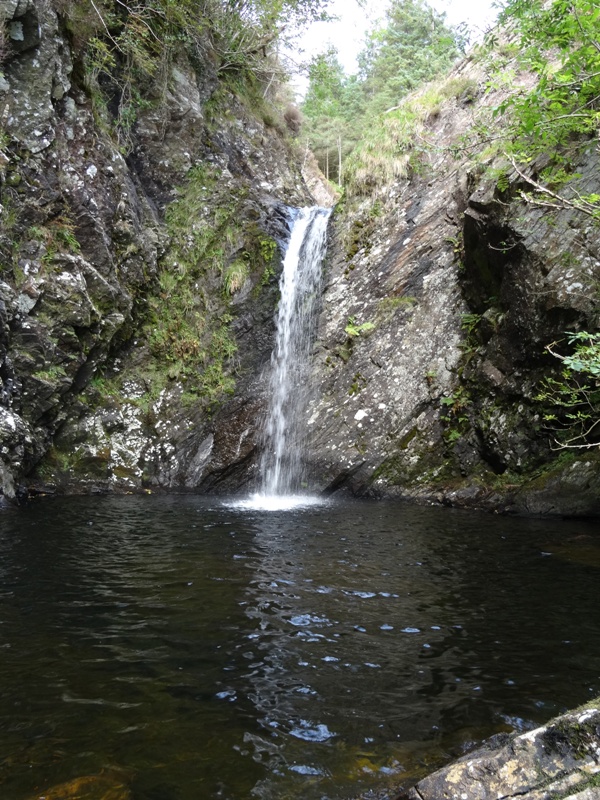 “Allt Mor” at Kinloch Rannoch - The village of Kinloch Rannoch is a place that doesn’t see a lot of tourists passing through, but that’s not because it isn’t a pretty place. The scenery around this village is stunning and if you climb the hill behind the village you can look west across the open expanse of Rannoch Moor towards the peaks of the mountains that form the eastern entrance to Glen Coe. The reason why Kinloch Rannoch isn’t on many tourists’ “to do” lists is the fact that it is on a road to pretty much nowhere, unless you fancy coffee and cake at the Rannoch Rail Station Tearoom, which is actually a good enough reason to merit the detour.

From the centre of the village, where there is the very nice Dunalastair Hotel, you walk towards the village garage / petrol station and then take 1st left to walk up a gravel track which soons brings you to a large pool behind which is a large rocky outcrop that the Allt Mor river flows over in a series of rivulets. It would be an almost perfect setting for a skinny dip if it wasn’t also such a good location for midges too. 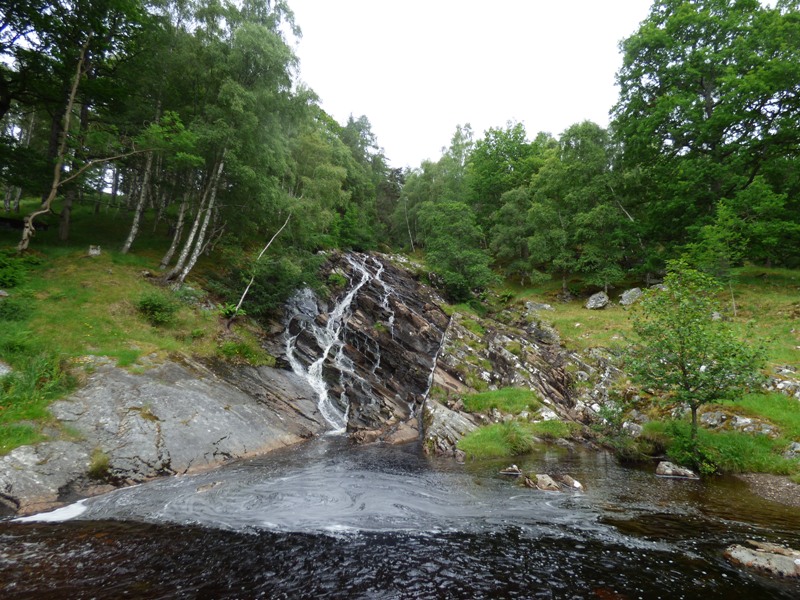