"Puzzle of the Picts"

We’ve been away touring in the North East Highlands this month and have even managed to pick up a bit of a sun tan! Oh yes, our road trip coincided with a heat wave and the thermometer was hovering around 30C almost every day. Whilst we loved the good weather, we weren’t so happy about touring around in a car with no air conditioning.

One of the reasons for our wee “holiday” (in reality it was a busy trip for route research), was to plan routes that we could use for a “Pictish Trail”. The Picts are one of the great mysteries of Scotland. The first written record of the Picts dates back to 297AD when a Roman writer made reference to a people in the North of the British Isles that he labelled the “Picti”. This comes from the Roman nickname the "Painted People", but this wasn't what the Picts called themselves as that is not recorded. I guess no Roman soldier ever got close enough to ask a  Pict what they called themselves! Of course, the Picts may have existed as a culture long before that, but there is no earlier written record despite the fact that the Picts are known to have had their own written language. And that is part of the big puzzle about the Picts, despite being an advanced culture that lasted at least 600 years, there is very little archaeological evidence that explains who they were and why they disappeared so completely in the 10th century.

The area of Scotland that was occupied by the Picts is something that can be gauged with some degree of accuracy as they left their mark with Pictish symbols carved on standing stones. Another thing that gives an indication of Pictish settlements is place names that start with “Pit” (e.g Pittenweem in Fife, Pitmedden in Aberdeenshire, Pitmuies in Angus). Plotting these on a map would suggest that the Picts occupied the whole Northern half of Scotland extending down the east coast to Fife. So Pictish carved stones can be found in lots of parts of Scotland, but some of the most interesting examples are in the North East and that’s where we headed.

One of the most impressive carved stones that you can find is also one of the most accessible and that is Sueno’s Stone on the outskirts of the pretty little town of Forres. This standing stone is a towering 21 feet high and it looks rather incongruous as it is encased in a modern structure of glass and aluminium which stands close to the busy A96. If you don’t know to look for it, you will almost certainly miss it, but it is worth seeking out. The origins of this stone, like so much Pictish history, have been lost and all that you can really say is that the stone seems to depict a very gruesome battle , which we can presume the Picts won. Maybe a big battle against the Vikings who seem to have been one of the key factors in the demise of the Picts. 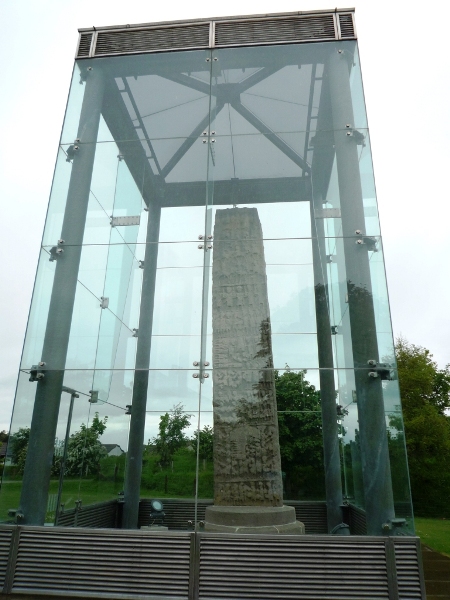 A more modestly proportioned stone, but with some beautiful carvings and artwork, is to be found at Nigg Old Church on the peninsula north of the Cromarty Firth. This is a place you really have to know about to find as it isn’t well signposted. The church is and its graveyard are hidden by mature woodlands, but the locals have been making efforts to boost awareness of their Pictish stone which is now displayed inside the church with new information boards explaining the history. This stone is interesting as it represents a period when Christianity was starting to take root in Northern Scotland so the traditional Pictish symbols are combined with Christian images. Amazingly, a piece of this beautifully carved stone was found discarded in the burn that runs past the graveyard. Maybe an act of vandalism that happened during the Reformation? 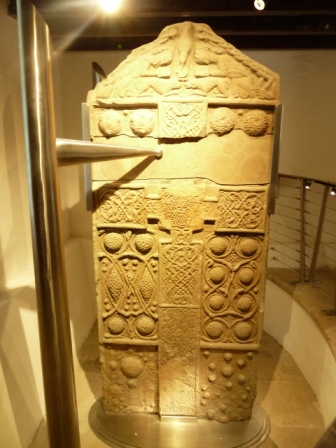 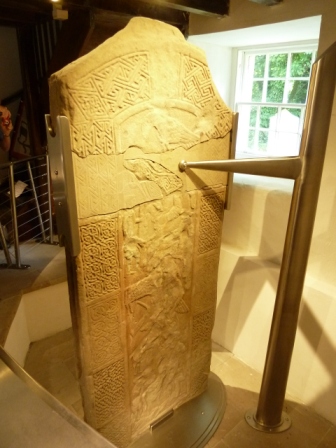 Continuing a little further along the coast of the Tarbat Peninsula brings you to the “Seaboard” villages where another intricately carved stone can be found. Like Sueno’s stone, the Shandwick stone has been protected from the elements by a modern glass case. This stone really needs this protection as it carries some incredibly fine “triskels” (3 into one spiral carvings) which are typical of the beautifully balanced geometric patterns that characterise Pictish art. This stone dates from the late 8th century by which time Christianity was clearly embedded in Pictish culture. 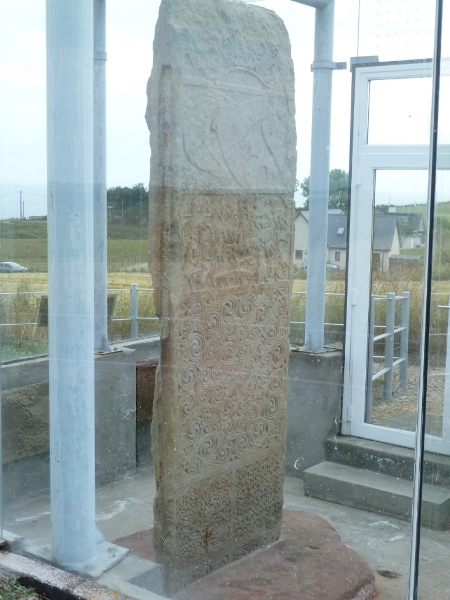 These are just a few tasters of the Pictish stones that you can find in Scotland, there’s far more than we have space to cover here. So when you are planning your trip to Scotland, don’t forget that the real mystery you need to explore isn’t “Nessie”, it’s where did the Picts go!?