I had an enquiry this month for a tour that would feature some of Scotland’s “most interesting” graveyards. Now that’s a question that I’d never asked myself before, “which graveyards have I enjoyed the most”, but I gave it some thought. So if you are thinking of taking a tour of Scotland and you dig graveyards (pun intended), here’s some places to consider…

Greyfriars (Edinburgh) - The first graveyard that comes to mind is also probably one of the most visited, and that is Greyfriars Kirk in Edinburgh. Now you’ll probably associate this place with the story of “Greyfriars Bobby”, the loyal Skye Terrier that sat by his masters grave until the day he died. The story is true, although it has been embellished. And if you visit, you will find the grave of Bobby’s owner, John Gray, along the eastern wall of the graveyard.

The history of this graveyard isn’t all fluffy and cute. There were some terrible deeds that took place here and the place is said to have a very aggressive poltergeist that has been known to bite! If you can avoid getting a nip from the resident poltergeist, you will find that Greyfriars graveyard gives you a  view of Edinburgh that hasn’t changed much in the last 200 – 300 years.  It doesn’t take too much imagination to get the sense that you’ve stepped into the setting of a Dickensian novel. 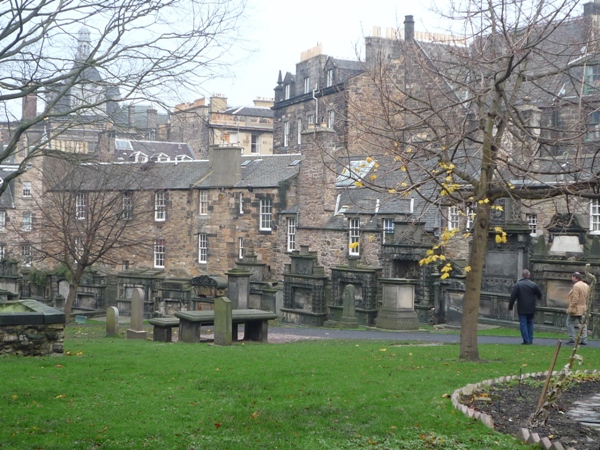 A very different graveyard that has to get a mention is the one at Kildalton Chapel on Islay. This graveyard is well known for its magnificent “Christian Wheel” cross which is a beautiful piece of stonemasonry standing an impressive 2.6 metres high.  During excavations, a skeleton was discovered beneath the cross. The remains displayed the characteristics of someone who had been killed by the ritual disembowelment method of the Vikings, and that's a really nasty way to go. It isn’t likely that the cross is related to their death, but maybe! 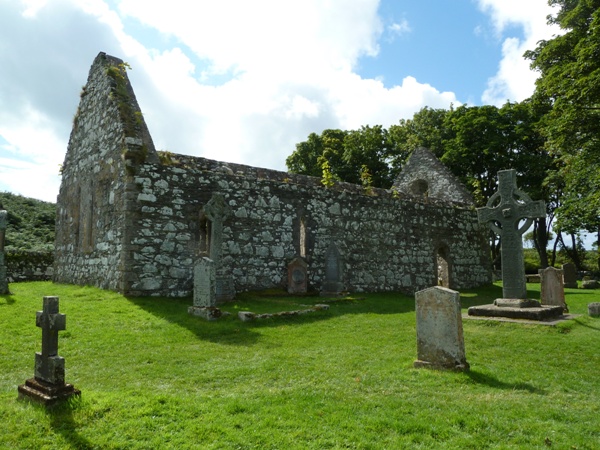 Staying on the Islands, but this time heading all the way north to the Isle of Hoy, there is a very moving memorial in the Osmondwall Cemetery at the southern end of Hoy. This cemetery is dominated by a memorial to the 8 crew members of the lifeboat “T.G.B” which capsized with the loss of all hands on the way to a rescue in March 1969 . In such a small community as Hoy, this accident had a huge impact on the islanders and it left behind seven widows and ten children without fathers. For some it was even worse for they lost husbands and sons in the same disaster. The memorial is that of a lifeboat man fully kitted out and looking eastwards towards the sea. It is hard not to be moved by the sadness of this place. 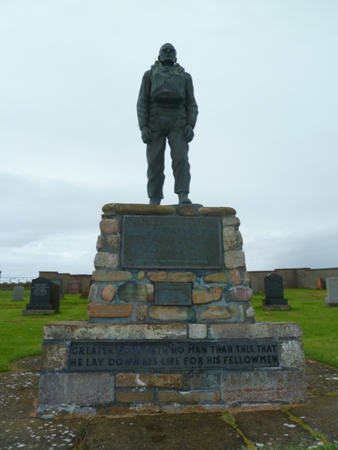 Hoy has another moving burial place, not a graveyard this time, but a solitary grave on a lonely piece of moorland. This is the resting place of Betty Corrigall. Betty is a tragic character from the 18th century who fell in love with a sailor, but when he left Orkney she discovered that she was pregnant. Betty tried to drown herself, but was saved. She then hung herself in a barn and her body was buried in an unmarked grave on the moors as suicide was considered too grave a sin to allow burial in consecrated ground. Her body was discovered in the 1930s and given the current tombstone. The grave is easily spotted from the road as it is a simple white tombstone surrounded by a crude little fence that stand out boldly against the green of the surround moors.

After mentioning these sad places, I think I need to lighten the mood by nominating a graveyard that could stake a claim to being the prettiest in Scotland, Fortingall.  No doubt other people will suggest other contenders for this title, but Fortingall churchyard does have another claim to fame and it involves the living rather than the dead.  In a corner of the graveyard there is a wizened old Yew tree which stands within its own walled enclosure with branches  supported by props.  This tree is over 2000 years old and was once recorded as having a girth of over 56 feet. That measurement has diminished over the years as souvenir hunters chipped away sections of bark, hence the need for the boundary wall. 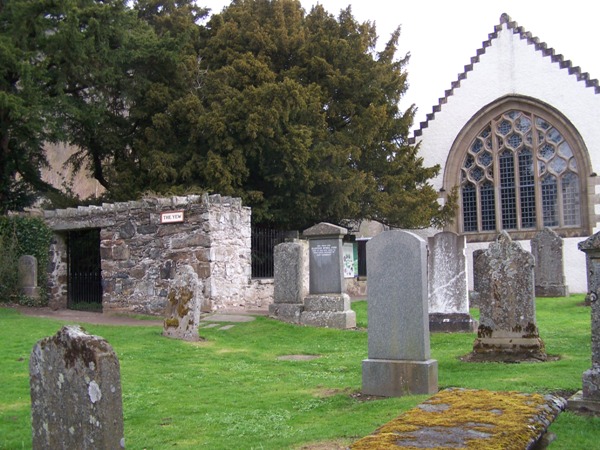 Dunlichity, we’ve written about this place before, but it has a feature that we’ve never found elsewhere although we’d love to know if other examples exist. This church is the traditional burial place for the MacGillivray clan and it was also the place where they would rally before battle. If you look carefully at the some of the stones  on the boundary wall, you can see grooves that were carved in the stones by the edges of swords being sharpened for action. The last such assembly of the clan before battle would have taken place in 1746 just before Culloden and this gives the grooves in the stone a certain historical resonance. 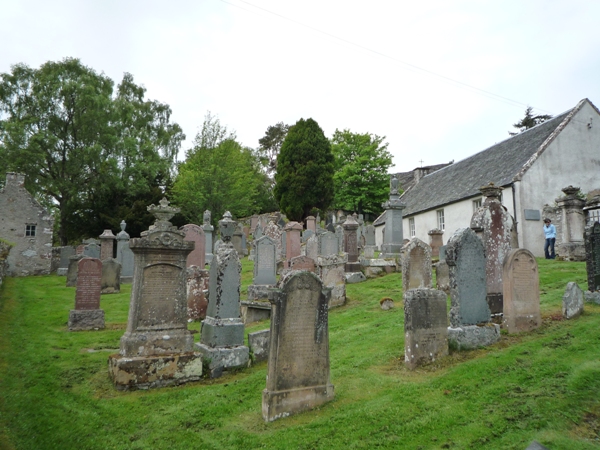 There is more than one Kirkmichael village in Scotland, but we are talking about the one in Ayrshire. At one end of the village, and almost hidden by its boundary wall and mature trees, there is a late 18th century church in an idyllic setting bordered by the Dyrock burn. There has been a church on this site since the 13th century and some of the graves pre-date the existing church.  There is an interesting memorial in the graveyard which commemorates the murder (1685) of Gillbert McAdam who was shot dead by the Laird of Culzean for refusing to renounce his allegiance to the Scottish Covenanter movement. It would take several chapters to explain the Covenanters, but in simple terms it was a Scottish movement that opposed the attempts of the King to impose the English church in Scotland. 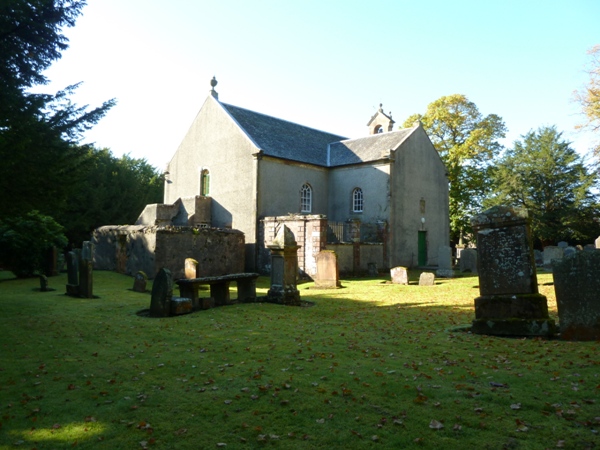 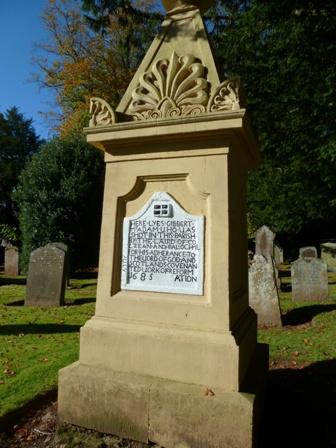 I’ll end this grave subject (yes another pun and yes I did intend it) with the graveyard of Kelso Abbey which I like for a very simple reason. You can get a pint of beer at the Black Swan (just across the road) and then sit on the grass surrounded by gravestones enjoying a nice cold pint. Furthermore, gravestones make a nice flat surface for resting your glass. I’m sure the occupants don’t mind too much. 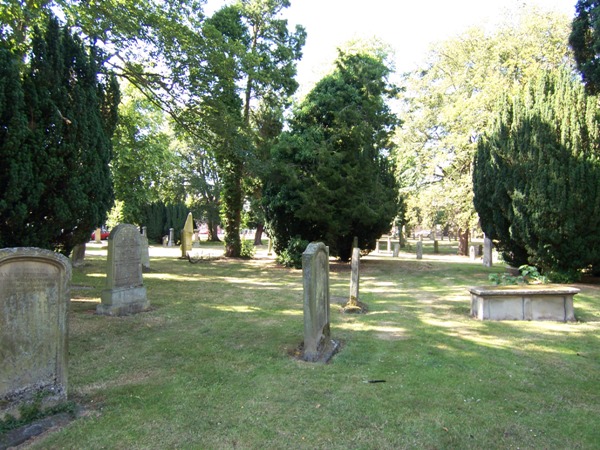