"Where is Craigh na Dun?"

Now that the Outlander TV show is being aired, we are getting lots of enquiries for tours with a Diana Gabaldon theme to them. Naturally, every "Outlander" fan wants to visit "Craigh na Dun" stone circle where the whole time-travelling adventure starts. The only problem with this is that Diana hadn’t visited Scotland when she wrote the first book so “Craigh na Dun” isn’t based on any actual stone circle and you need to use a bit of artistic licence if you are to find your own mystical time portal. The location where they filmed Craigh na Dun scenes is on a private farm a few miles east of the remote village of Kinloch Rannoch in Perthshire. In the TV show, they created their own stone circle using Styrofoam standing stones in a sheltered copse of trees. We're a bit reluctant to publicise the exact location as we'd hate to see the place mobbed with coach parties and crowds of tourists. Apart from anything else, it is located on pasture land with livestock grazing nearby and there's no suitable parking for the number of people that would wish to visit.

If you are interested in visiting "Outlander" film locations you can browse our range of Scotland Tours and select "Outlander" as one of the search criteria. 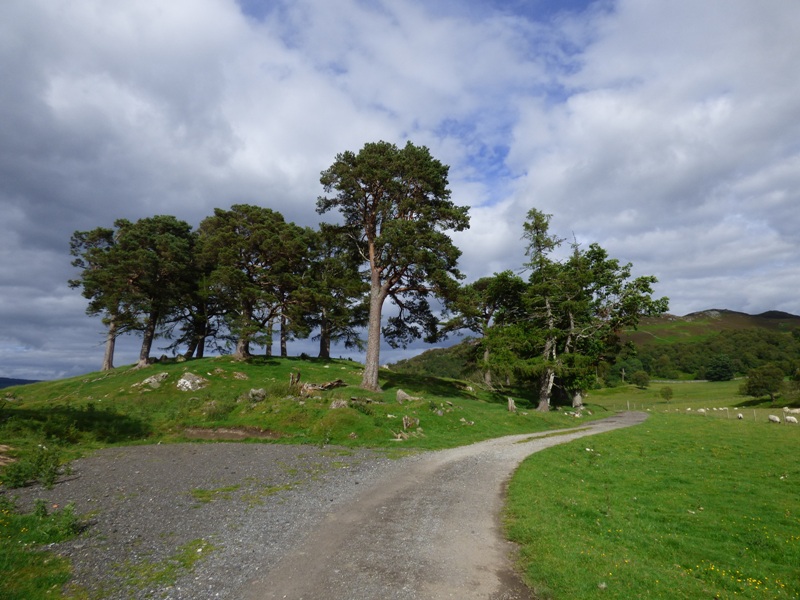 The shape of the stones suggests that the film producers were inspired by the aesthetic qualities of Calanais stones on the Isle of Lewis. If you go to Calanais seeking to find your own Jamie, you might be disappointed to find that the site is in an exposed position with not a sight of a tree anywhere nearby. And you should also be prepared to be sharing the site with quite a few other visitors which might cut down your chances of being transported back in time to 1743. 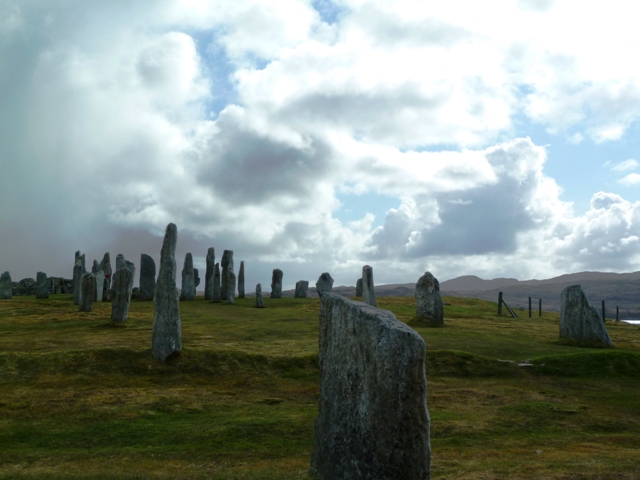 If you want to find a stone circle where you can pretend to be Claire Beauchamp travelling through time to find your Jamie, we think you need a setting that’s a bit more intimate and secluded. In “Outlander” the stone circle is described as having stones that are at least twice the height of Claire (so 11 feet tall at least) and they are on top of a hill somewhere within day-trip distance of Inverness. Unfortunately, there really aren’t any places that match those criteria so we’ve had to make suggestions based on places that tick the boxes of being more secluded and a bit mystical.

For a place that oozes time stood still, our first suggestion would be the Machrie standing stones on Arran. These 3 large stones stand on an open moor with very few signs of civilization within view, except for a few old derelict farm buildings and some distant houses. To really get a sense of the mystical and timeless quality of Machrie Moor, we recommend that you visit the stones at dusk on a summer’s night. 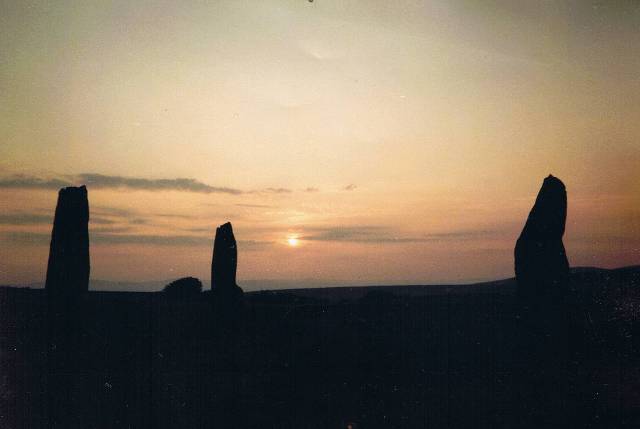 Croftmoraig stone circle doesn’t enjoy the same sense of remoteness as Machrie, there’s actually a house that practically overlooks the site. Despite its ease of accessibility, it is a stone circle that very few people visit. This is largely due to the fact that the stones aren’t signposted from the A827 road that runs within a few feet of the stones. Consequently, hundreds of people drive past the stones every day without ever realising their presence as a stone wall hides them from the road. The stones aren’t tall enough to match the description in Gabaldon’s books, but they are formed in a circle with trees around them. 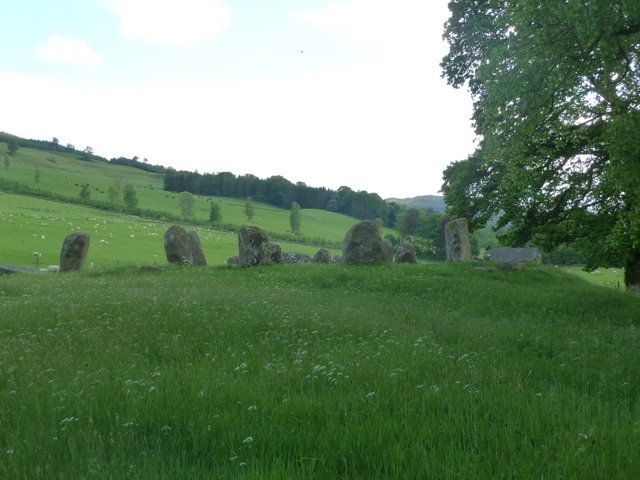 It takes a bit more effort to get to the stone circle at West Delfour, but this is another site that isn’t signposted and we’ve found that many of the locals don’t even know about its existence. It isn’t surprising that they don’t know about it as you have to drive up a bit of dirt track to get to the stones and it isn’t a place that you would pass through on the way to anything else. West Delfour site is a bit of a mystery. There is one very large standing stone which stands at the “entrance” to a circle of much smaller sized stones that stand shoulder to shoulder in a neat circle. Like most stone circles, there is speculation about the purpose of the site, but it is most likely that it was once a burial cairn that had most of its stones removed over the centuries to provide material for other buildings.

Sunhoney Stone Circle is a place that we reckon could be a contender for “Craigh na Dun”. It is about 100 miles from Inverness, OK not quite a day trip. It stands on a bit of a hill in a small copse of trees. The stones are around 11 foot tall, they stand in a circle and they are most certainly not on the mainstream tourist trail. Once again, the site is not signposted so you need to look out for the sign for Sunhoney farm and then use your “nose” to sniff out the stones. The farmer is friendly but do please be respectful of the fact that you are entering a working farm. Like the mythical stone circle in the books, Sunhoney does give you the impression that it could have been used in some pagan rituals as it has a large recumbent stone set between two tall upright stones. Previous excavations at the site did find some evidence to suggest that the stone circle was used for ceremonial cremations, but maybe some prehistoric tribe just thought it was a nice spot to set up a barbeque… we’ll never know! One stone circle site that does appear to have a better-understood purpose is Nether Largie in Kilmartin Glen (~29 miles south of Oban so also nowhere near Inverness). The standing stones at Nether Largie have an astronomical alignment that coincides with southernmost and northernmost setting points of the moon on the horizon. The impressive thing about this piece of Neolithic astronomy is that the lunar cycle which they chart is only repeated at 19-year intervals. Now that’s pretty mystical in our opinion and maybe, just maybe, a portal in time is opened briefly once every 19 years. Someone should write a book about that!