If the news reports are correct, a large chunk of Iceland is currently hovering over Scotland as a cloud of volcanic ash and almost all aircraft activity, bar a few piston engined puddle hoppers, has been cancelled. It is causing chaos for holidaymakers and I hope it hasn't affected too many of our customers.

I have to say that I haven't noticed anything in skies above Scotland that would suggest there is any ash cloud, but they do say that it is too high up to be noticed. The cynical part of me is asking if the airlines aren't just using the ash cloud as an excuse to bolster profits in a recession. Think about it! The airlines can say it is an "Act of God" and this will get them off the hook with compensation claims. The passengers have paid for their flights, but the planes aren't going anywhere so the airlines don't have to take fuel costs out of their ticket sales. The passengers still need to get home so they will need to buy another flight.... Just a thought!

Despite the presence of a Volcanic ash cloud, the skies over Scotland have been very clear for the last 3 days and we had some lovely weather whilst out and about. One side effect of the ash clouds has maybe been the lovely pink sunsets that we had last night whilst traveling down from Plockton. The pictures are a little bit hazy and squint as we took them out of the car window whilst on the move. However, they still give you an impression of what a nice evening it was. 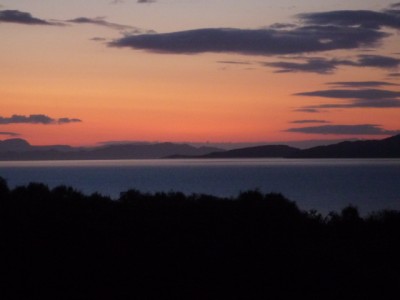 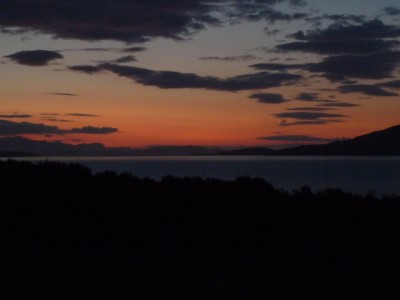 The good weather has held out in our South West corner of Scotland so we have been out and about in the Galloway Forest Park. I've said it before in my blog posts, but this forgotten corner of Scotland provides a lot of the same qualities that people go to the Highlands to seek. For sure the scenery is not as dramatically wild, but it still has its own beauty and the same sense of isolation. There are also some lovely little villages with a real sense of community.

Two villages that really stand out for us as places we would like to live are Straiton and New Galloway. Straiton has recently opened a community owned shop which is very well stocked and largely sells produce sourced from local farms. All the villagers contribute £10 a year to the running costs of the shop and some of the locals take turns in helping to staff it. We did our bit to support the shop by buying one of their delicious steak pies!

The picture below is not the communal shop (it is tucked around a corner on the right), but this picture does show you how pretty Straiton main street is. Most of the houses date from the mid to late 1700's, but parts of the church date from the 1350's. 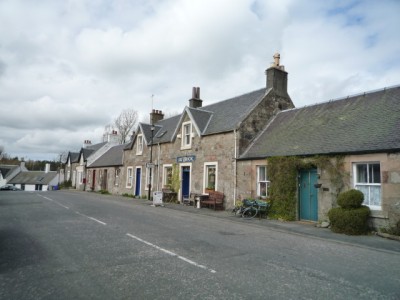