I don't know if anyone actually follows these Blog entries, but if you do you will have noticed that we missed February. The main reason for this is Facebook, or rather the fact that we didn't have that much extra of interest to add to the stuff that was on our Facebook page.

The travel blog for February could have been a lot more interesting, but the day when we were due to head up to Banffshire for some route research was the same day that lorries were jack knifing in the snow on the A9. We didn't fancy writing a blog about survival techniques for snow bound motorists, so we were boring and stayed at home...sorry!

The harsh winter has now melted (literally) into a glorious sunny Spring, which means we can get out and about again so we made the most of a glorious day and jumped on the ferry to Arran. 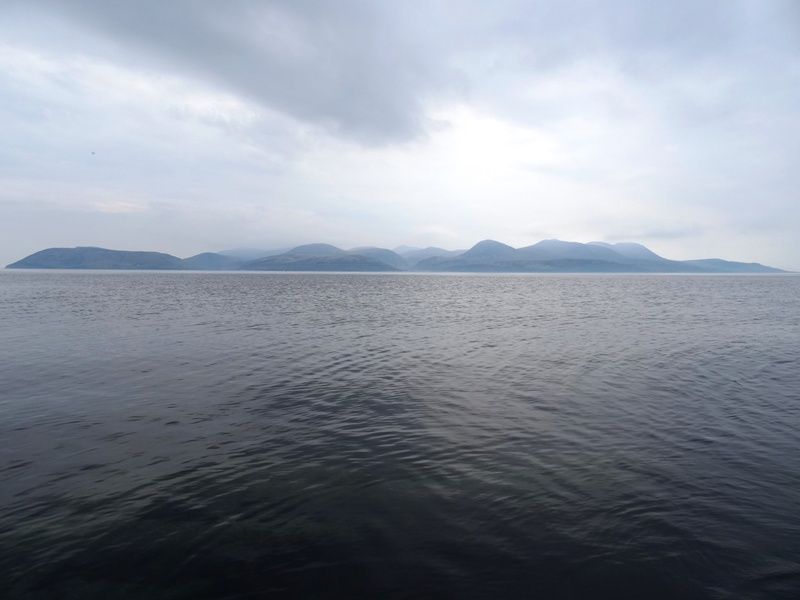 One of the best things about living where we do is the view across to the Isle of Arran. At this time of year the peaks of the island are capped in snow and it beckons you to visit. Now if you've read any guidebooks about Scotland, you will almost certainly have heard reference to Arran as being "Scotland in Miniature" and there are a lot of good reasons for the comparison. Arran sits astride the fault line which delineates the geological boundary of the Highlands. As a result the island has a northern half of craggy mountain peaks and a southern half of rolling farmland. 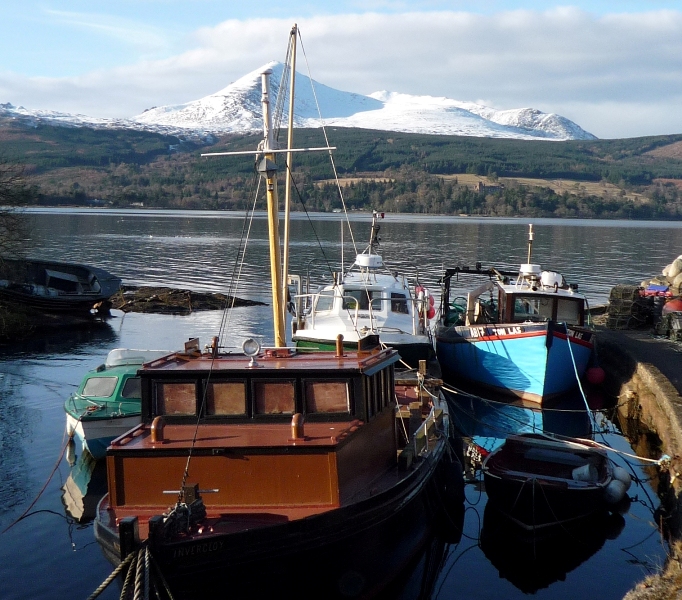 It ticks the "Scotland in Miniature" boxes in several other ways too; it has a grand castle with a history that dates back to the Vikings, a distillery (one of the newest in Scotland), cheese factories, a micro brewery, standing stones and some good (if unlikely) legends linking it to Robert the Bruce and his fight for Scottish Independence. The most famous of these stories tells of Bruce, whilst waiting in a cave for a signal from the mainland, being inspired to continue his fight for Scottish Indepence by the determination of a spider repeatedly trying to weave its web. The aforementioned cave is on the west coast of Arran and is suitably adorned with spiders to commemorate the story and Robert the Bruce's visit. 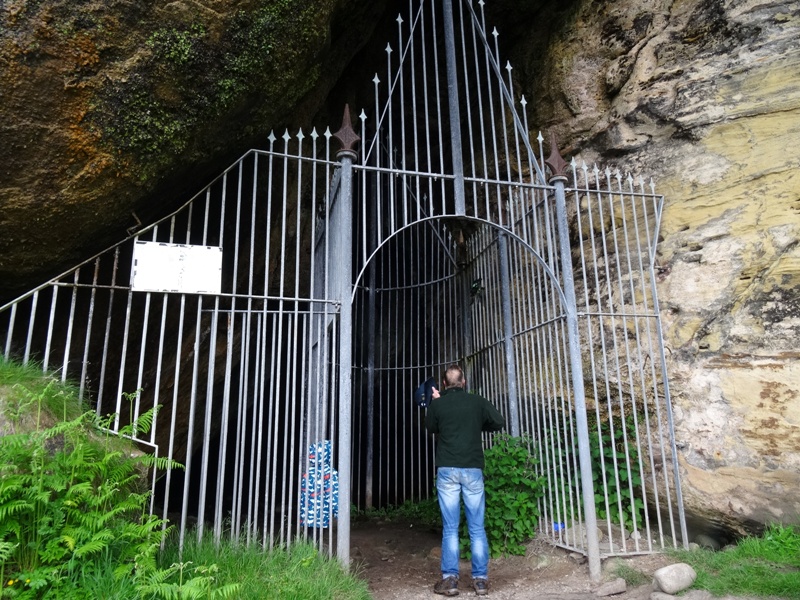 Arran holds a special significance for me as my family always spent at least a week of holiday here each year and almost always in the same tiny little cottage near Lamlash (which is the village in the picture below). I doubt that such cottages still exist to rent as holiday lets because they would be considered too basic for human habitation. However I have only fond memories of those times. The cottage had no carpets or rugs and the floors were simply concrete painted red or grey. There were 2 tiny bedrooms with box beds that had mattresses deep enough to consume a 5 yr old. The bathroom was a corrugated steel lean-to appended to the back of the house and the central heating was a 2 bar electric fire in the equally compact front room. The only thing central about the heating was the fact that the fire could sit in the middle of the room to let a family of 5 huddle around it. 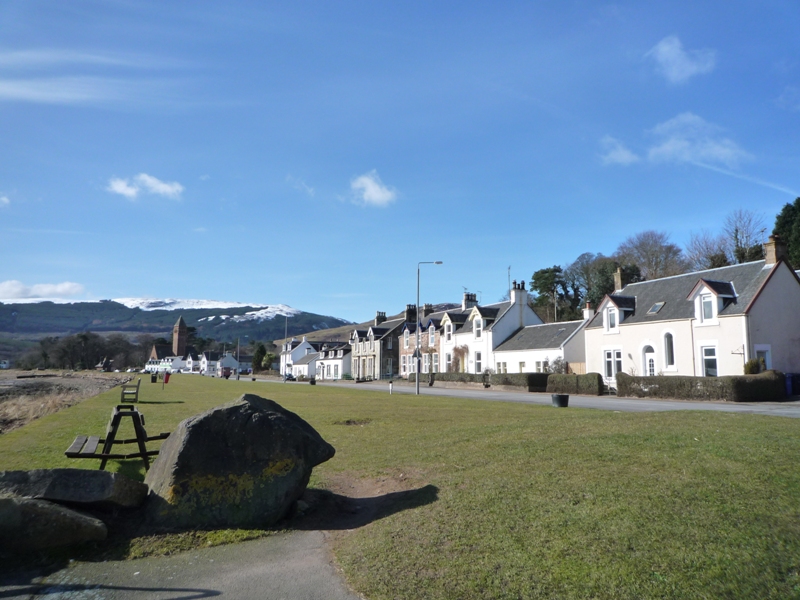 So where am I going with this trip down memory lane? Well, our most recent jaunt to Arran was simply to visit 2 lovely new places to stay. One of them is a small hotel that has just had a beautiful refurbishment and the other is an old barn that has been sympathetically converted into a really charismatic B&B. So nowadays you can stay on Arran with all the modern creature comforts that you could hope to have.

Arran has also become a real haven for foodies. I mentioned the cheese factories above, but these are complimented by a mustard / chutney factory, a chocolatier and a very good smokehouse! We sampled a little bit of each on our visit and had a superb platter of Smoked Salmon, Hot Smoked Salmon, Arran Cheeses, Arran Oatcakes and Chutney. It was as delicious as it looks! 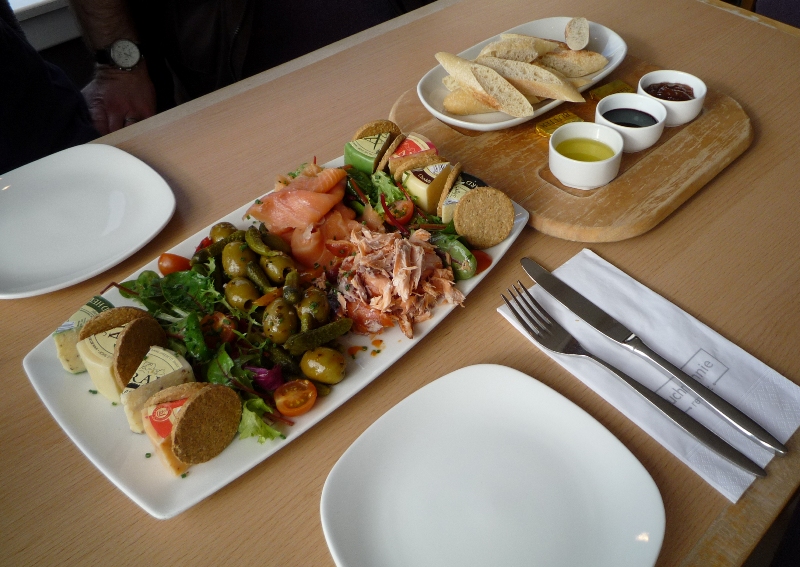 We didn't have time on this visit to do any major hillwalking, but Arran is a good place for this too. The main peak of the Island has the rather un-Scottish sounding name of Goatfell. It isn't quite tall enough to be classified as a Munro, but it offers very rewarding views from the summit and it can be quite a challenging ridge climb if you approach it from certain angles. Goatfell also has the distinction of being the scene of a murder back in July 1889. 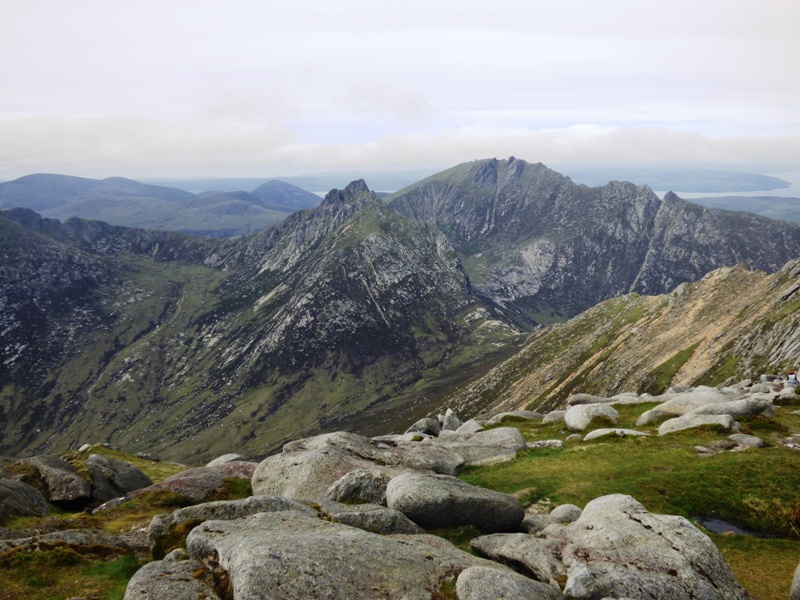 Another lovely walk on Arran is the path up through Glen Rosa that leads to the "Saddle", and this is an alternative route for a more challenging climb of Goatfell. I'm very familiar with the Glen Rosa path as I spent 2 weeks in 1998 on a project to improve the cross drains on it. It certainly made an impression on me, because 11 years later I can still identify the boulders that I had to shift to make the path.

I've added two pictures below to show you the variety of Arran scenery and how wonderful this small, but perfectly formed corner of Scotland can be when the sun shines!