When you tell people that you are going to Tiree, their first reaction is usually a slightly puzzled look followed by the question, “Where exactly is that?”. For sure, most Scots will have heard of Tiree and they’ll know it is an island on the west coast, but not many would be able to pinpoint it on a map and far fewer will have been there. The 3 ½ hour sailing is enough to deter most tourists, but the isolation of Tiree is also one of its best selling points.

If you are a bit of a “Townie”, accustomed to shopping centres, nightclubs and fast food franchises, you might arrive on Tiree and feel a bit like Robinson Crusoe coming to terms with life as a castaway. Make no mistake, Tiree is not a large island and it takes a special mindset and character to adapt to this type of island life. Fortunately, 650 people do enjoy the qualities of living full time on Tiree and they all seem to know one another.

This community spirit is one of the island’s great charms.

The other good reason to head to Tiree is that it is one of the sunniest places in Scotland. Of course, that is a relative statement so don't fill your bags with too much sun cream.

Another thing you won't need much of on Tiree is midge repellant, the island doesn't seem to have any of the little b*ggers. This is probably because midges can't fly in winds of more than 5mph and Tiree, sitting in the Atlantic ocean, almost always has a steady breeze blowing in from some direction.

So what should you do to occupy a week on an island of just 30 square miles with 2 grocery stores, 1 bank, 2 pubs and several hundred sheep. Actually, before we go any further, we should talk some more about the sheep as there is virtually nowhere on Tiree where you can go to escape them or traces of their passing. As a result, it is traditional on Tiree that you remove your shoes before you go into anyone’s house. 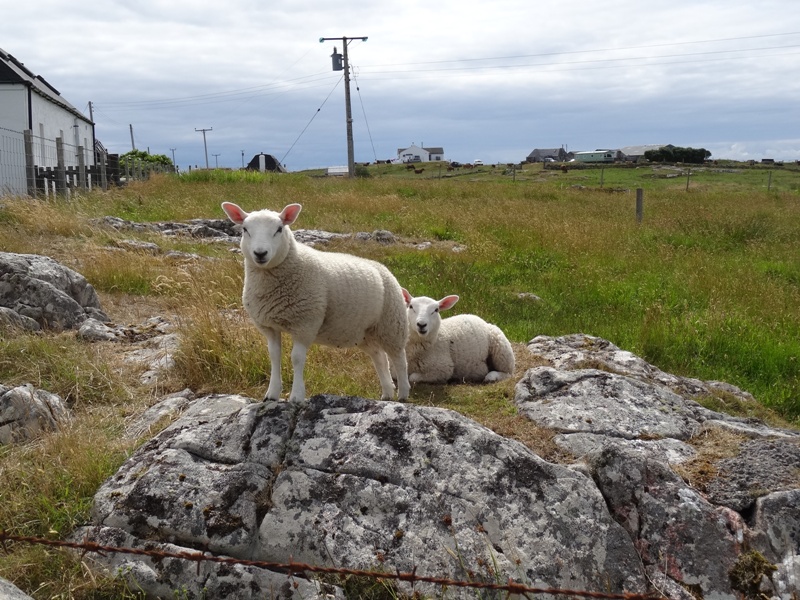 But we digress...so here are our “Top Tips” for things you should try to do whilst visiting Tiree:

When visiting somewhere new it’s always a good idea to climb somewhere high to get your bearings. In Paris, you might go up the Eiffel Tower, In Edinburgh, you could climb Arthur’s Seat or go up to the Castle. On Tiree, you can climb Ben Hough (all 119 metres of it) and this lets you see just about all of Tiree in one 360 degree sweep. 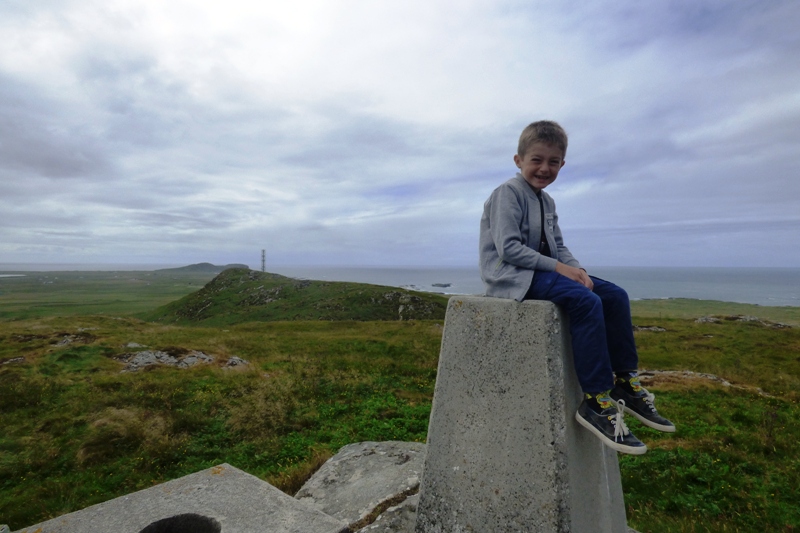 Carnan Mor is actually a slightly higher hill at 141 metres, but the summit of this hill is dominated by a large radar dome so your 360 degree is obstructed by a massive “Golf Ball” which can be seen from almost every part of Tiree.

Something that you’ll notice on Tiree is that almost every hill, even ones that are not much more than a bump, has the remnants of a WW2 military installation on it. During the war, Tiree with its outlying position on the edge of the North Atlantic, was a base for long range aircraft that would fly several hundred miles out to sea to gather meteorological intelligence for weather forecasts. The large WW2 airfield that once was home to long range B24 Liberators, is still an operating airport for the small passenger aircraft that operate a scheduled service between Tiree and Glasgow.

Remains of Iron Age Brochs can be found all over Scotland and their condition varies tremendously. Mousa Broch on Shetland is the best example and is practically complete, but not all brochs have survived the centuries as successfully. This is often because the stone used to build these brochs was a good source of building materials and later generations steadily dismantled the Brochs for other purposes. 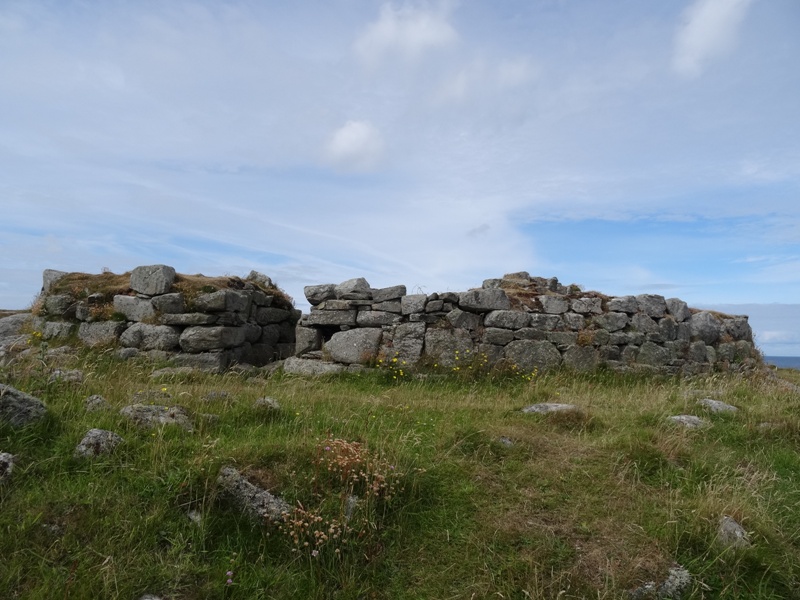 Dun Mor Broch has certainly lost a lot of its upper walls, but a good section of the lower stonework is in place and it is one of the better examples of a broch that you will find in the Southern Hebrides. Enough of the walls remain for you to be able to identify the “kennel” at the broch entrance where guard dogs would have been kept to attack strangers. There are also the first few steps of one of the inner staircases and you can still walk around the broch in the cavity space between the inner and outer walls. 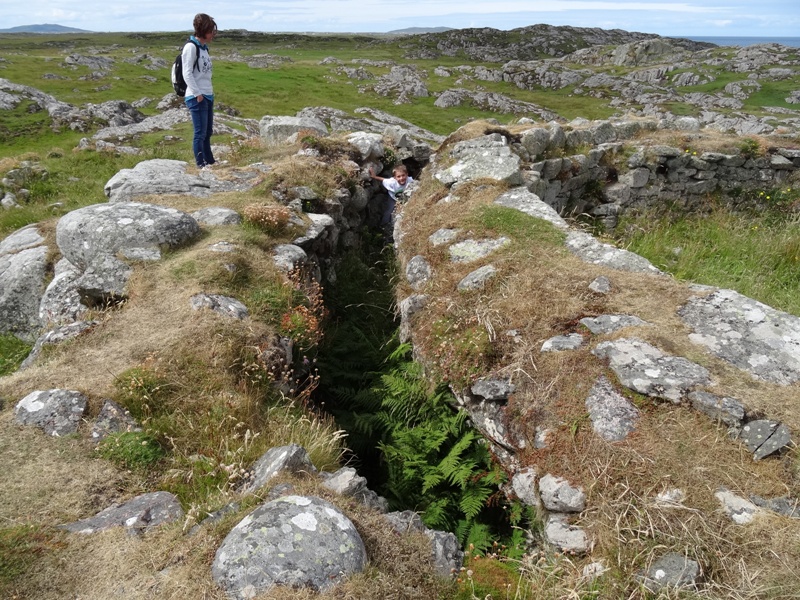 The construction of this lighthouse in the mid 1800’s is a fascinating story and engineering achievement that, in terms of the challenges overcome, should be ranked alongside more famous structures like the Forth Rail Bridge. Skerryvore is the name of a reef that lies some 12 miles off Tiree and it claimed a large number of vessels and sailors lives before the construction of the lighthouse. If you climb to the higher ground of the headland at Hynish, you should (with the naked eye) be able to see the lighthouse on the horizon. What you are first likely to notice is not the lighthouse, but the large plumes of sea spray erupting over the reef. If you want to get closer to the reef, there are boat trips that sail from Tiree on a 2 hour round trip that visits the reef. 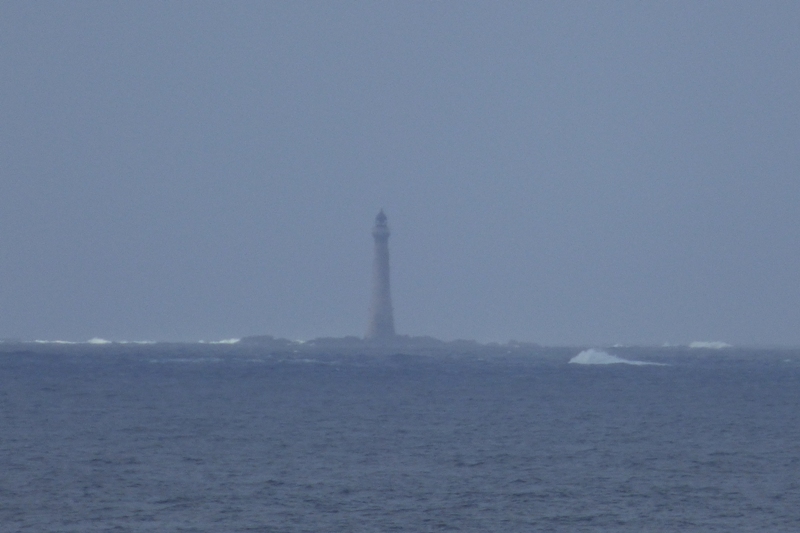 The lighthouse was designed by Alan Stevenson (uncle of the famous author Robert Louis Stevenson) and still holds the record as the tallest in Scotland. If you wanted a lighthouse built in the 1800’s, you went to the Stevenson family. The construction was started in 1838 and completed in 1844 for a cost of ~£100,000, which sounds like very good value to me.

Hynish on Tiree was the shore station for the construction project and most of the houses at Hynish are buildings that date from this period. One of the buildings hosts an exhibition that recounts the genuinely fascinating story of how the lighthouse came to be. There really is material here for the making of a film as this was an engineering project conducted in the most extreme of environments. Amazingly, no lives were lost during the 6 years that it took to build the lighthouse. 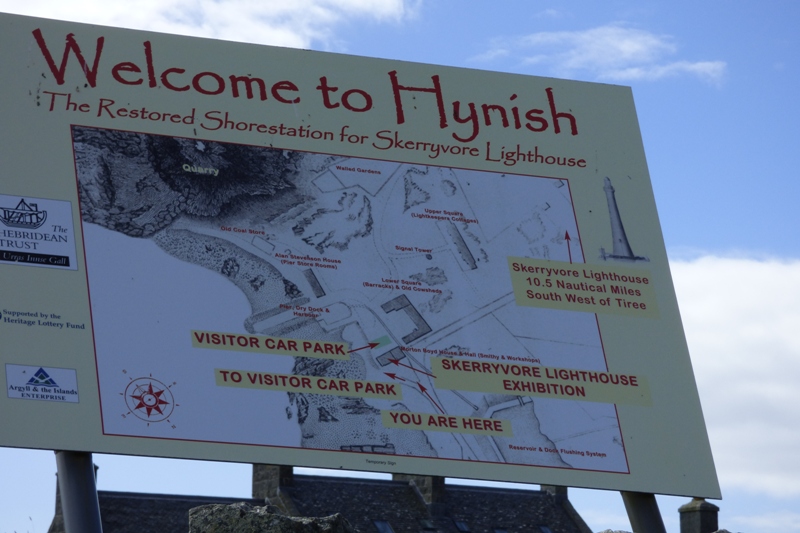 You are spoilt for choice when it comes to beaches on Tiree and one of the first things you need to do is drive around the island to check them all out. The combination of breakers rolling in from the Atlantic and pristine beaches facing North, South, East, and West, means that Tiree is a great destination for surfing and windsurfing. Balevulin bay seems to be the most popular beach for the surfers, but this is Scotland so a wetsuit is essential or you might wind up with hypothermia. 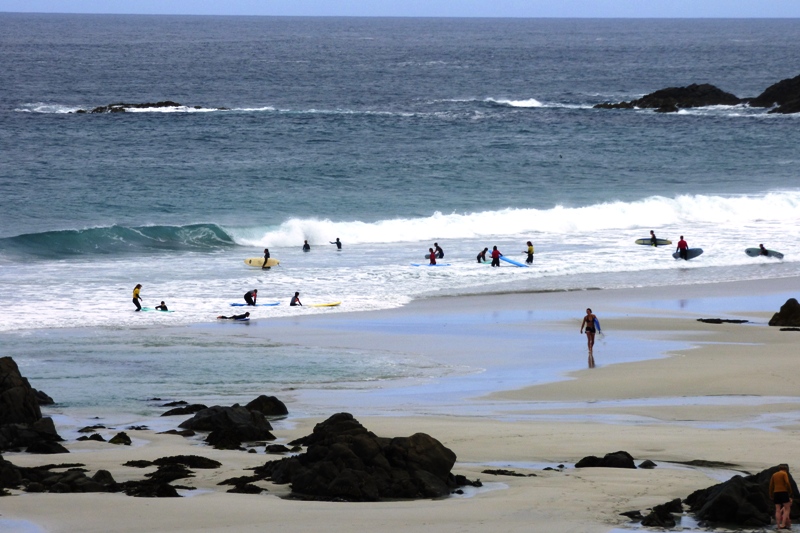 If you want a beach all to yourself, there is no problem with finding a quiet corner. Our favourite beach is at Port na Mistress at the north west tip of Tiree. It isn’t the largest stretch of sand, but it has lovely views towards the islands of Coll and Mull. 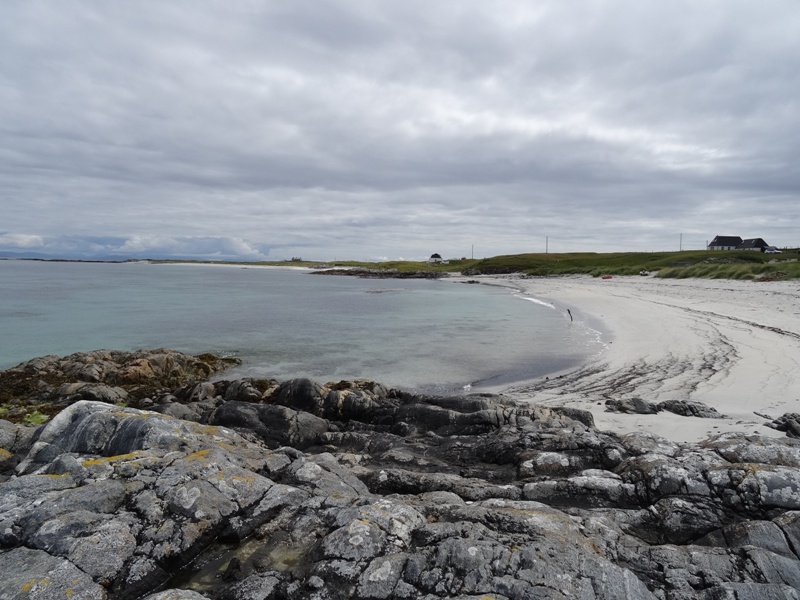 We mentioned the omnipresent sheep earlier, so it is no surprise that they are one of the hazards you face when playing golf on Tiree. When an island only has 30 square miles of land, it would be very indulgent to set aside several thousand square metres just for playing golf. Pragmatism rules on Tiree and the sheep roam freely on the fairways, but a compromise had to be found for the Greens. The Tiree solution is to fence of the greens to ensure that your putting line isn’t impeded by a piece of sheep poop. It certainly keeps the sheep out, but it does require a very accurate chip shot to lob your ball over the fence without hitting the wire or a post. 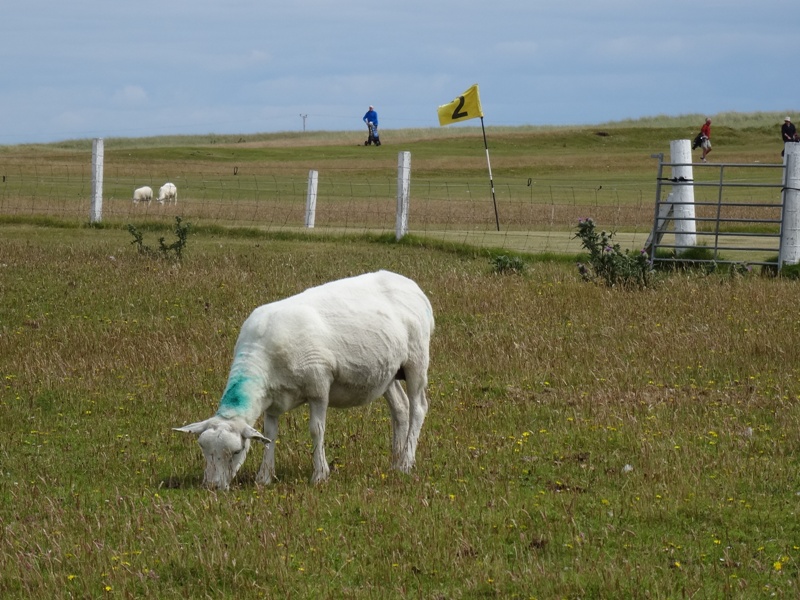 Just behind the Tiree Lodge Hotel, there is a farm track that leads a short distance to the ruins of two chapels. The buildings date from the 13th  and 14th century and have some noteworthy 15th century grave slabs with intricate carvings. One of the slabs is claimed to have the earliest known depiction of a claymore sword.

For the photographer seeking a moody shot, the silhouettes of the 2 chapels at Kirkapol can provide a haunting subject in the golden light of a Tiree sunset. 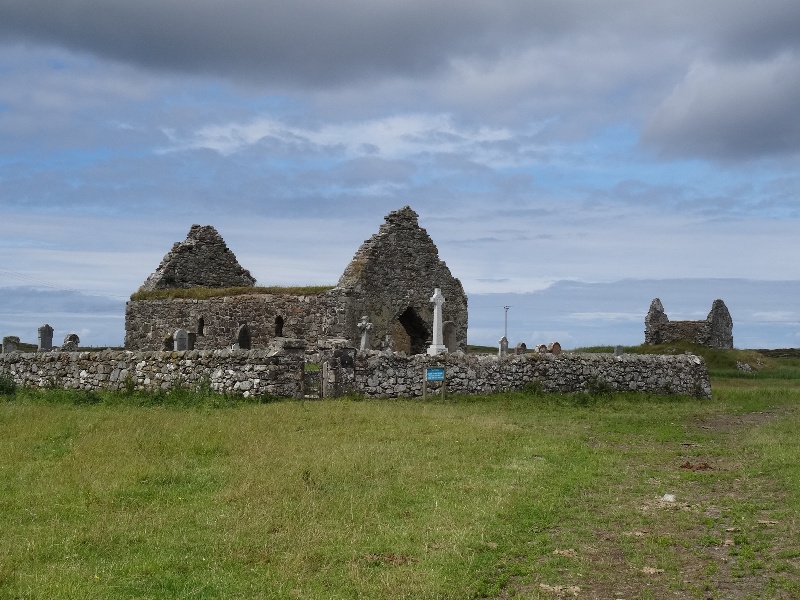 Seafood from the Tiree Lobster and Crab Van -

In the car park just beside the bank in the main village of Scarinish you will find the Tiree Lobster and Crab van (more of a trailer actually). The van sells a great range of local fish and meat at competitive prices. For £10 we got 5 or 6 generous handfuls of fresh shrimps that we cooked and ate al fresco on the beach. If you don’t want to do any cooking, you can also buy ready to go lobster and dressed crab. 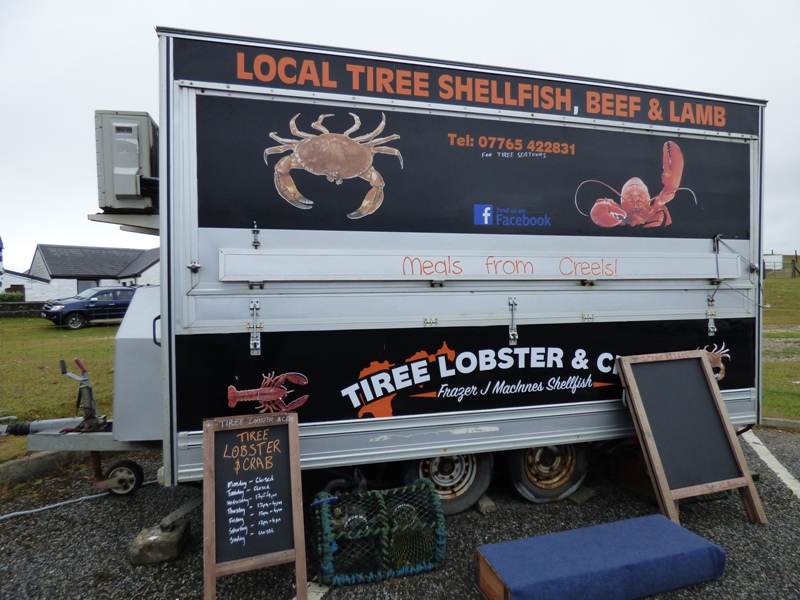 If you walk to the western end of the beach at Balephetrish Bay, you will come to small headland of rock where the rocks have been eroded by the waves in such a way that they now form a narrow bridge over a little inlet. The shape of the inlet creates a bit of a blowhole when the waves surge under the natural arch. If you don't mind getting wet, you can stand at the end of the inlet and judge for yourself if the seventh wave really is the biggest. 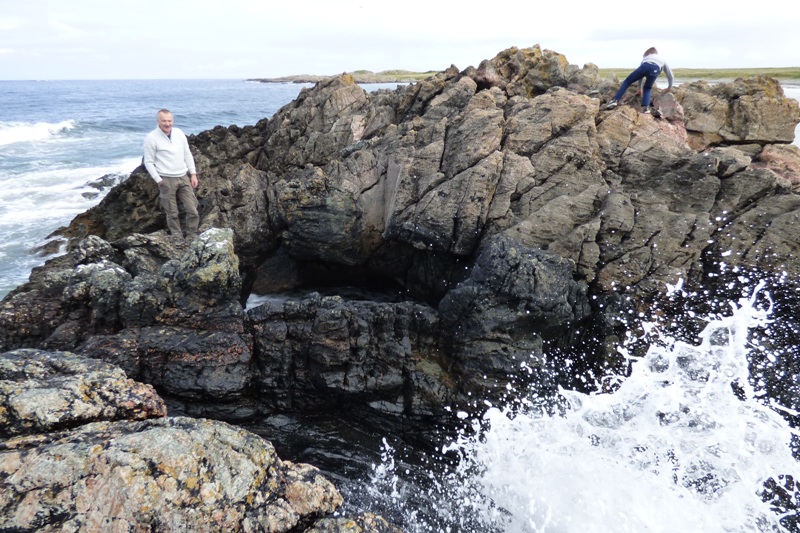 The Tiree Music Festival takes place every year over a long weekend in early July. Despite the 4 hour ferry journey from Oban, the festival attracts a large audience, but not so large that it loses its sense of being a family-friendly community event.

The nice thing about the festival is its laid back atmosphere. Everyone is just here to let their hair down and have a bit of fun and this sentiment is encapsulated in the festival's motto; "TMF - whatever the weather!" 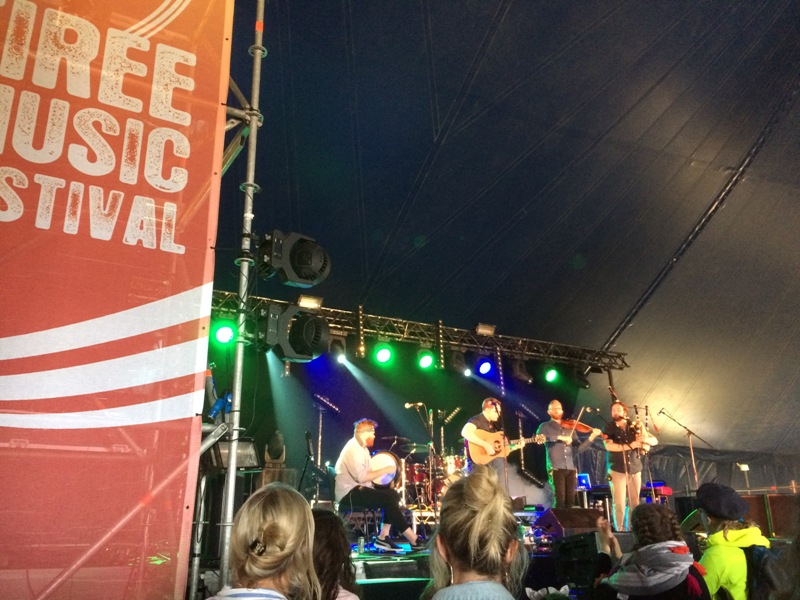 Indeed, the organisers make a special effort to keep this a family-friendly event and they lay on various activities to keep kids entertained. For example, lessons in sand drawing on the beach! 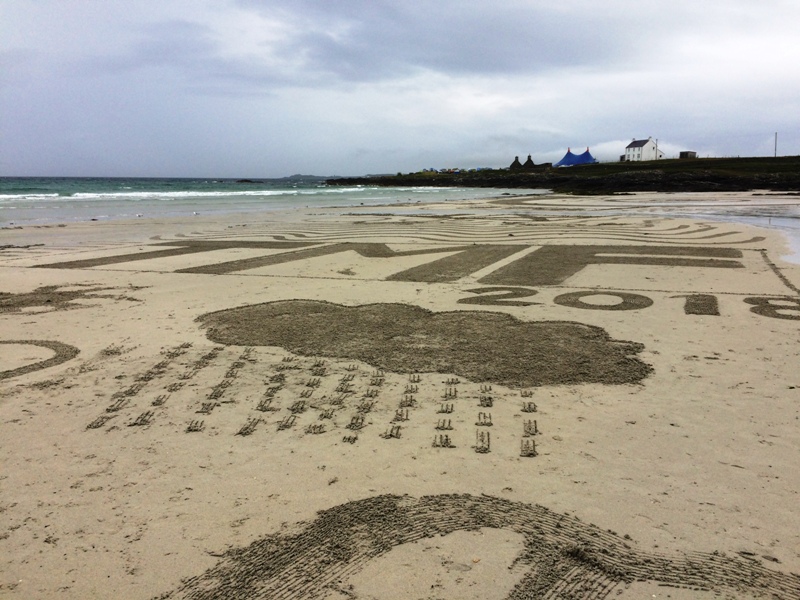 If you are planning on going to Tiree at the same time as the festival, you need to book your ferry tickets well in advance as the ferry services often struggle to cope with the spike in visitors that the event creates.

Likewise, accommodation on the island books up fast around the festival dates, but you can camp next to the festival site and basic toilet facilities are laid on for those that want to sleep under canvas.

For us, the highlight of the Music Festival was the informal after festival party in the bar at the Tiree Lodge Hotel. If you go along to the lodge the day after the festival ends, you'll find a lot of the bands having a jamming session and few beers in the cozy wee bar at the back of the hotel. Everyone is very chilled and it's great "craic".