"Just Off the Beaten Track"

Whilst travelling back from a visit to Ullapool, I noticed a side road that I hadn’t taken before. Since my bladder was reaching capacity, I decided it would be a good opportunity to do some “off track” exploring and hopefully also find a suitably quiet spot to answer the “call of nature”. For once I was grateful that I’d drunk that extra cup of coffee at breakfast as my unscheduled pee stop resulted in me finding a lovely picnic spot at Garvie Bridge. And best of all, I had the place all to myself despite the fact that it is just a 3 minute drive from the busy A835 main road.

Garvie Bridge is a great example of the sort of place we like to highlight in our guides. The bridge is just a few miles upstream from the Rogie Falls, but whilst I had Garvie Bridge all to myself, the car park at Rogie Falls had upwards of twenty cars in it. I’d admit that Rogie Falls is a bit more dramatic and you can have some fun crossing over the Blackwater river on a bouncy little suspension bridge. But Garvie Bridge has something special about it, and the presence of the old bridge gives you a sense of history… as if crossing over it will take you back in time like something from “Outlander”. 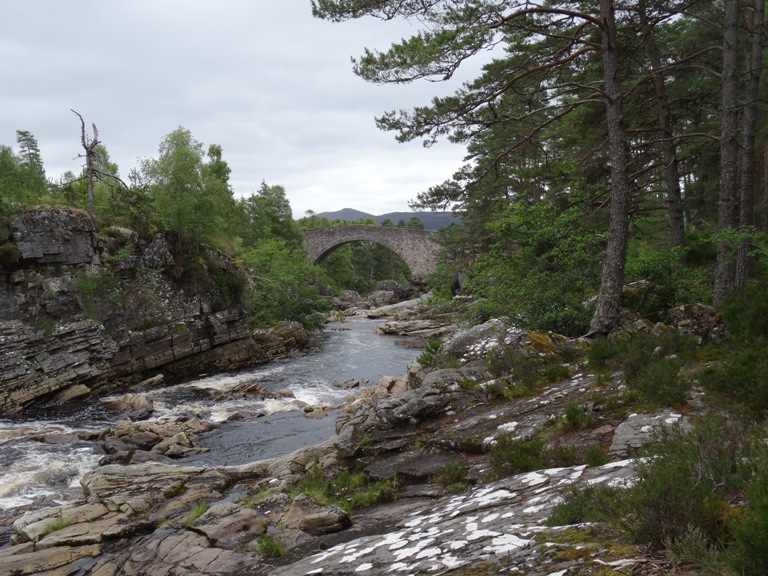 So…. In this month’s Blog I am going to give a few examples of interesting, or scenic places that are close to busy main roads, but which are often missed by the crowds rushing on their way from A to B.

The Falls of Truim is the epitome of a hidden gem that is passed by literally thousands of people every day.  But it isn’t signposted and you’d never know it was there unless you’d been tipped off, or had the good sense to buy a Secret Scotland tour itinerary. On the A9, a few miles north of the exit for Dalwhinnie, there is a side road that brings you to a small car park. From here you have a short walk of ~200 yards to get to an old stone bridge that straddles a rock pool just above the cascades of the Falls of Truim. It is not unusual to see salmon lazing in this rock pool and we do have some grainy photographs to prove this, but taking a good clear picture of a salmon in peaty brown water is not easy. The falls sit in a bit of a gorge so, although the busy A9 is just a few hundred feet away, you really can’t hear any sound of the speeding traffic. 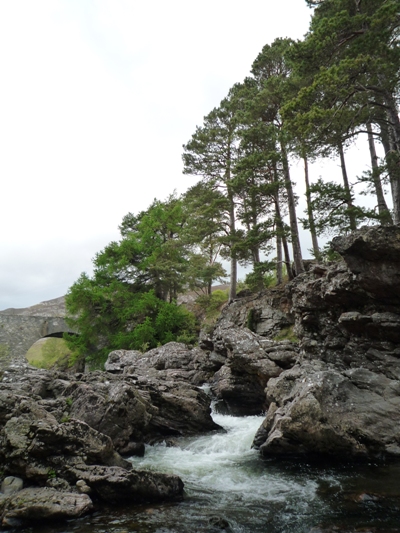 By the time you get to the East Linton exit on the A1, from Berwick-upon-Tweed to Edinburgh, you’re so close to Edinburgh that you ‘ll probably not be giving much thought to squeezing in a journey break as the big city attractions are just 30 minutes away. This would be a pity as not only is East Linton a really pretty little village with a good pub, but you would also be missing the charming old building at Preston Mill. This mill was the last working watermill in East Lothian and only closed down as a business in 1959. The mill is a bizarre looking, but very attractive 18th century building with a “higgledy-piggedly” conical shaped roof. We’re told that the mill’s conical roof design has Dutch origin’s, but we think it looks more like something a Hobbit would live in. 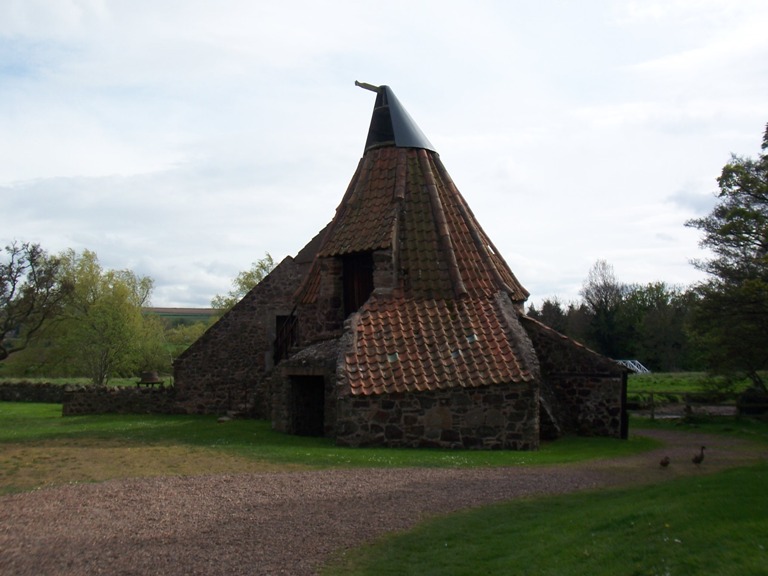 Just a couple of miles west of East Linton, but on the otherside of the busy A1, are the ruins of Hailes Castle. This castle is easily missed as it isn’t signposted from the A1 and, despite being a castle of quite impressive scale, there is no admission fee. Like most castles in this part of Scotland, Oliver Cromwell had a bash at it in the 1650’s and left it in a bit of a mess. As a result, the southern approach to the castle is not very impressive, but you can get a really good impression of the building’s former glory if you if you go down the river bank on the north side and look back up at the castle. Interesting features of this castle are the “Doocot” (pigeon was a major part of the diet back in the 16th – 17th century) and the pit dungeon. Ghost investigators have conducted measurements of paranormal activity here and got some spooky results on their tape recorders. 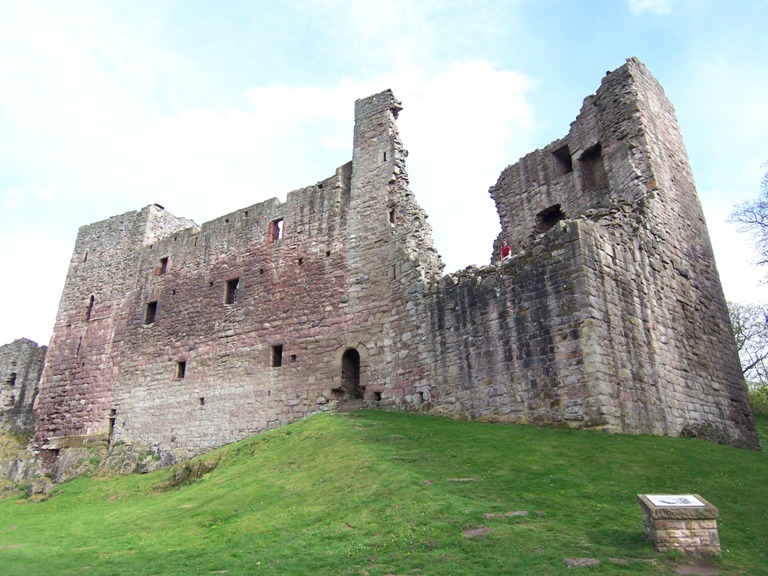 Our next place doesn’t sit on quite such busy roads as the A9 or A1, but it is just a few hundred metres from the route of the A83 which runs from Tarbet (on Loch Lomond) all the way down through Inveraray to Campbeltown on the Mull of Kintyre. If you are travelling this way, when you get to the shores of Loch Fyne, do yourself a favour and take a very short detour into the lochside village of Cairndow to visit the unusual Kilmorich Church. What makes this church unusual is that it is octagonal in shape. We only know of one other church in Scotland that shares this design feature and that is Glenorchy church in the village of Dalmally (about 10 miles due north of Cairndow). 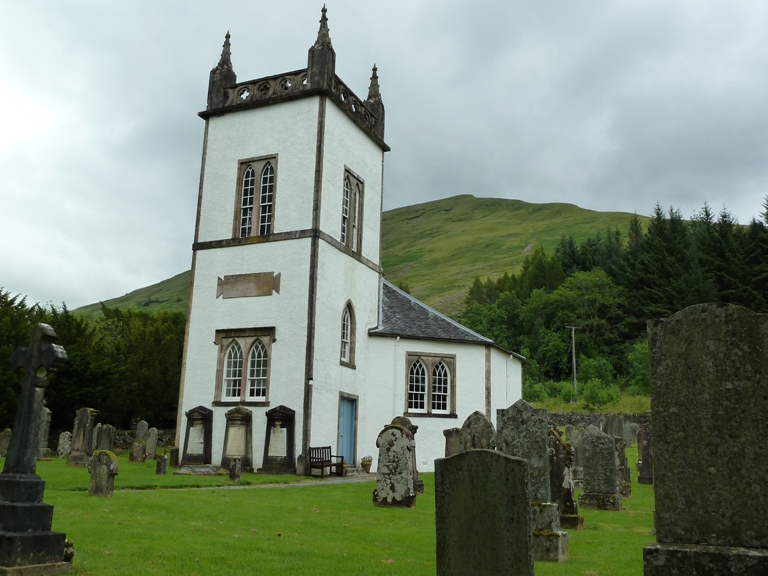