The holiday season has certainly started and we are seeing a marked increase in the number of enquiries at Secret Scotland. We always enjoy creating customised tours, but it certainly makes life busy.

Also keeping us busy last week was a tour of Royal Deeside. We made full use of our membership cards for the National Trust for Scotland and Historic Scotland, and visited 5 castles over the weekend. We actually visited 7 properties, but we were too late for one of them and a wedding was in progress at the other so access was limited.

Despite the frustration of travelling a long way to miss two visits, we still managed to fit in visits to Crathes, Craigievar, Kildrummy, Castle Fraser and Huntly Castle.

You would think that little changes from year to year at an old castle, but the National Trust is always active at restoration and the opening of new areas to the public. At Crathes they are developing an adventure playground called Sky Trek, but a completion date is way off. At Castle Fraser they have recently recreated the castle's herb gardens in a traditional style and Craigievar is due to be closed for major restoration works after this September. 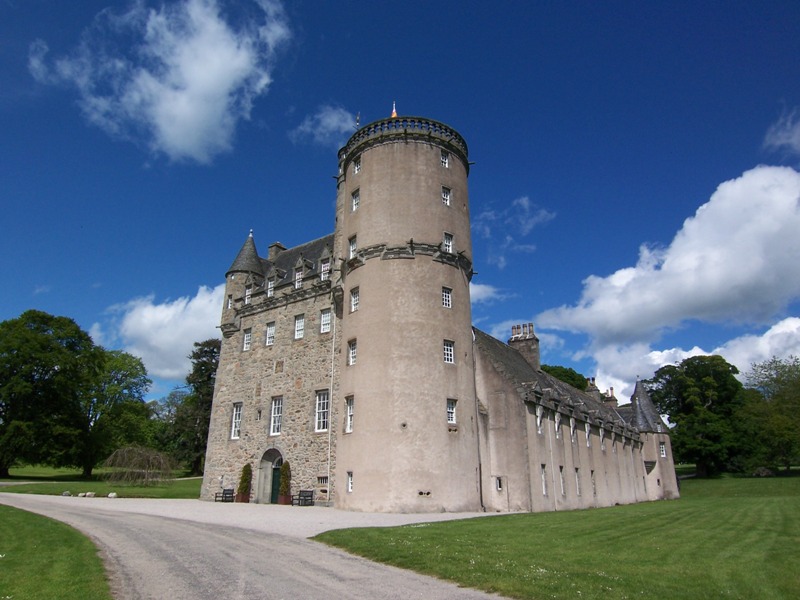 Kildrummy Castle and Huntly Castle, on the other hand, are carefully preserved ruins and little changes from year to year except for the maintenance of the buildings. Aurelia had visited Huntly before, but it was my first time and I was very impressed. We've seen so many castle ruins, but Huntly is more interesting than most as it has a very intact basement and a large dungeon complete with prisoners. 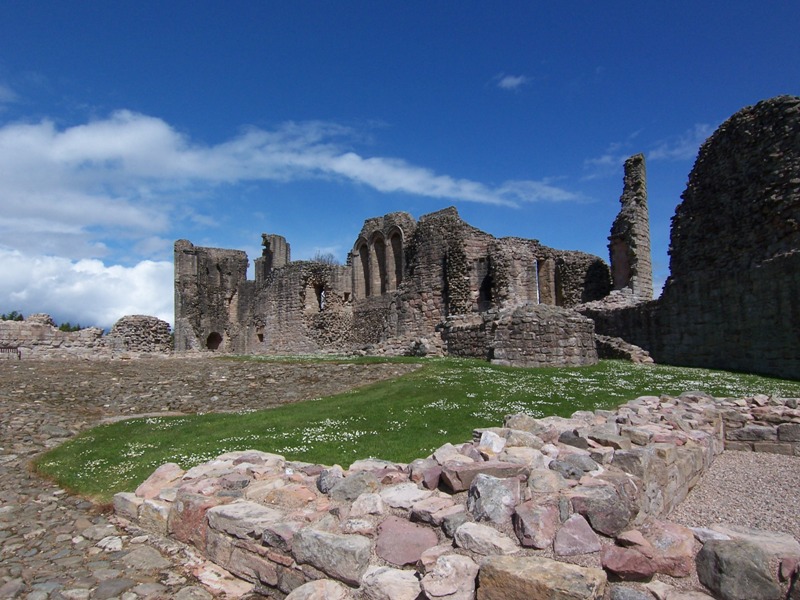 Visitors can also climb to the top of the castle and get a great view from a little platform on the roof. I don't suffer from vertigo, but leaning over the barrier to take pictures was making me feel a bit dizzy. Another interesting feature of Huntly is the very intact Brewhouse where you can see the troughs in the floor where the beer making equipment would have sat. Apparently, the average consumption of beer in medieval times was 1 gallon (4.4 litres) per person per day!!! Its a wonder they managed to build Huntly Castle at all. 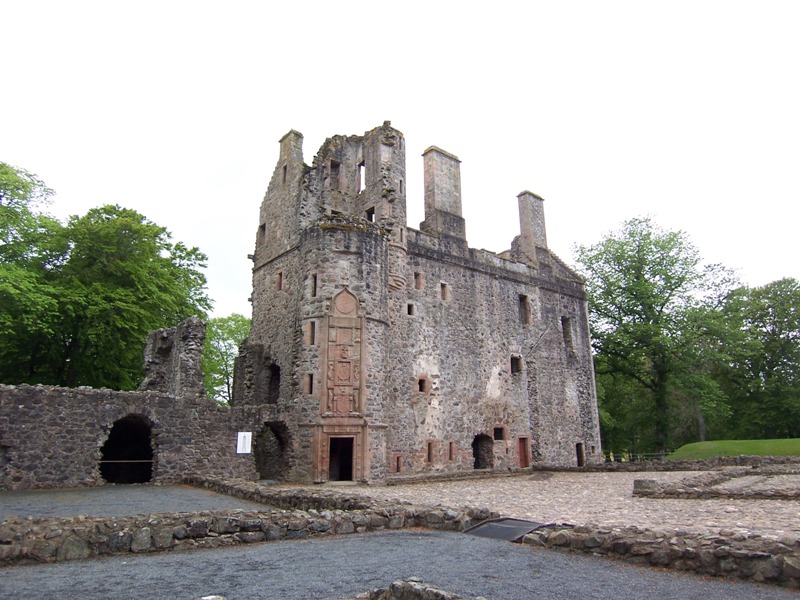 The good weather is back after a week of mixed rain and sunshine which made it too risky to plan any trips for photography. A nice big band of high pressure has been sitting to the west of Scotland so the weather appeared safe for a Ionger trip to explore around the Strontian, Moidart and Sunart area.

This is an exceptionally lovely area of Scotland and the woodlands around Loch Sunart give some feel of how Scotland must have looked before the timber was exploited for ship building and the furnaces of the iron works. Fortunately, Sunart is an area that is largely bypassed by most visitors so it is full of great opportunities to find lonely bays for a paddle and a picnic.

One of our favourite beaches in this area is at Ardtoe. You can find Ardtoe marked on maps, but it is at the end of a road to nowhere so you seldom find many visitors. The road to Ardtoe bay is single track and it crosses a bit of a moor before weaving in a series of sharp bends to the little car park beside the beach. On the way it passes a garishly painted boulder depicting a "Monster Midge". A subtle warning about the ferocity of the local midges (if you were wondering, midges are the smaller, but more irritating cousin of the mosquito). We were lucky and the midges seemed to be having a siesta when we visited, but then they aren't meant to be able to fly in winds faster than 5mph so maybe that was the reason?

Ardtoe Bay is a lovely spot with clean sands and clear sea water. When the sun is shining you could almost imagine yourself to be on a tropical island. It wasn't quite that warm for us so we resisted the chance for a swim and just had a quick paddle before exploring more side roads for our new west coast tours. 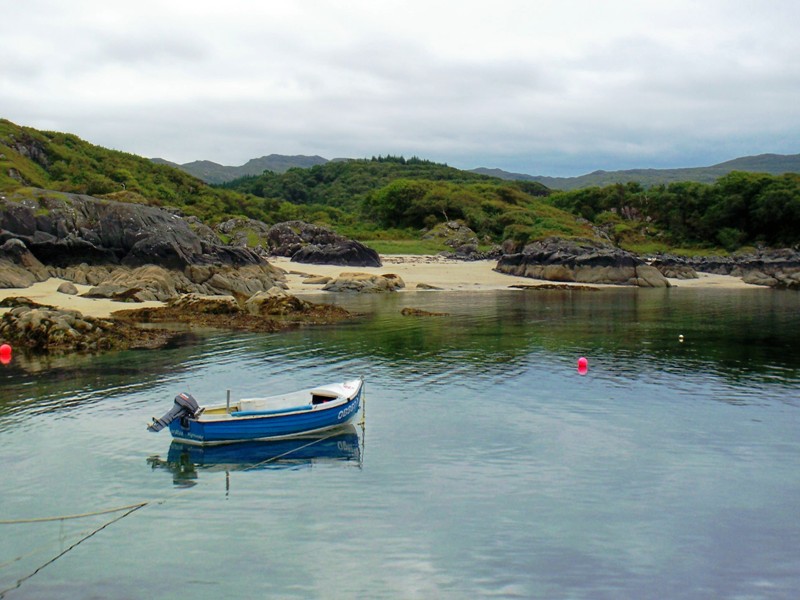 We've been so busy that the Diary was almost forgotten about. Most of our activities since the last diary entry are quite boring, but we have been kept busy with our excellent designers at Artista who have been helping us with the creation of some postcards and window stickers.

Keep an eye out for the Secret Scotland Recommended window stickers as they are being distributed to our favourite B&B's, Hotels, Restaurants and Tourist Attractions.

The last week has also been a busy time in Scottish Politics. As a small business we're delighted to see that the SNP won the majority of votes, but time will tell whether or not the opposition parties are going to spoil the current optimism in Scotland.

On the travel front, we have been fine tuning our Edinburgh Day Trip routes and spent a weekend in East Lothian visiting Glenkinchie Distillery, Rosslyn Chapel and Crichton Castle.

I had been to Glenkinchie previously when organising tours for a previous employer, but the distillery's visitor centre has undergone some upgrades and we were very impressed by the Museum of Malt Whisky which is a nice little introduction to the tour. Mike seemed most impressed by the wide range of rare Malts in the shop, but less impressed by the prices which seemed a bit higher than some supermarkets. 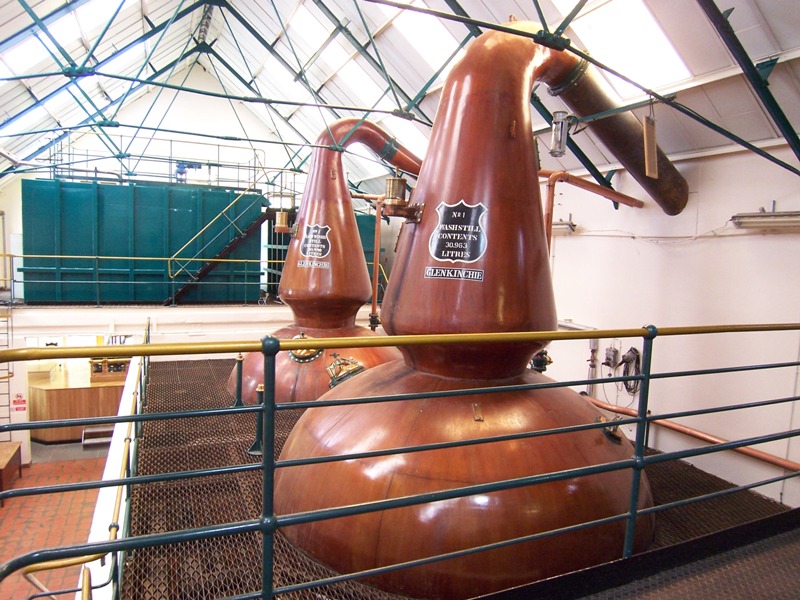 Next on our tick list was a return to Rosslyn Chapel. Mike had visited the Chapel long before the "Da Vinci Code" brought so much focus to the building. It was a thoroughly enjoyable visit and we were surprised that we spent a full hour in the chapel when, in reality, it is a fairly small building. The detail in the stonework is amazing and the patterns do make you wonder if there might just be some secrets locked in the stone. 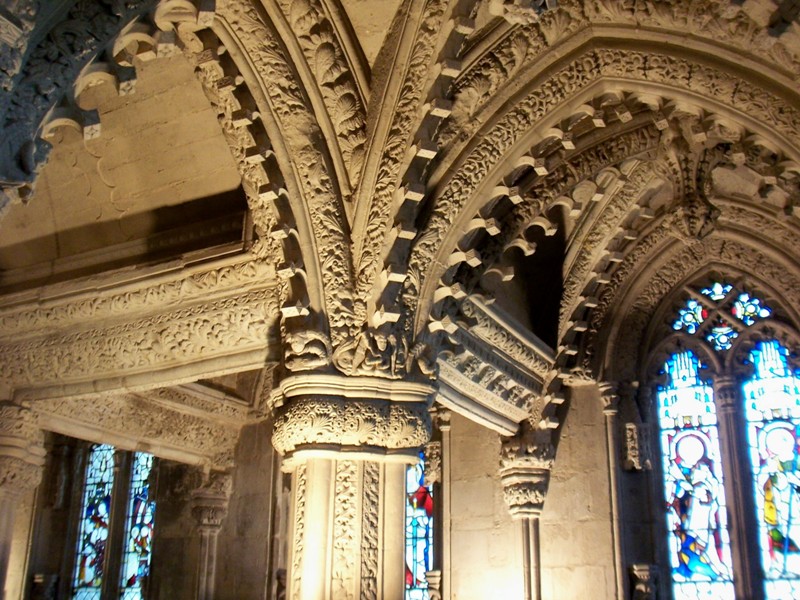 Our last visit of the day was to Crichton Castle. The most appealing aspect of the castle is its unusual courtyard with walls that feature diamond shaped stones. One other aspect of Crichton Castle that sets it apart from the others near Edinburgh, is the timeless appearance of the surroundings. You approach the castle via a farm track and there are no signs of the 21st Century anywhere in sight. 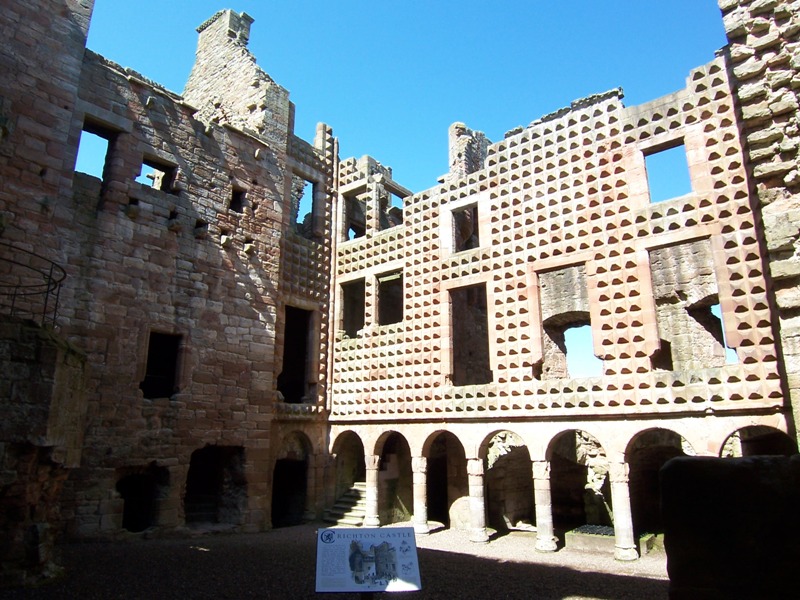