The big event in this week's diary is the delivery of our Secret Scotland postcards. Its taken a surprisingly long time for us to get this sorted out, but last week we received our first batch of 20,000 cards. Now we have the task of delivering them to our recommended B&Bs.

Now we could have done this the easy way and just posted them out to everybody, but Aurelia and I believe in the personal touch so we are hand delivering all our cards. This gives us a great opportunity to meet some of the lovely people that we visited over the last year and to catch up on their news.

This week I've done a trip to Edinburgh and a trip to Kirkcudbright. Each time I've left Ayr in great sunshine and then arrived at my destination in decidely un-summer like weather. However, the weather in Kirkcudbright did brighten up and we managed to take some pictures at the Cairnholy burial ground. The last time we visited Cairnholy (in December 2005) it was so misty that we nearly walked past the burial chambers, so it was nice to actually be able to see them this time. 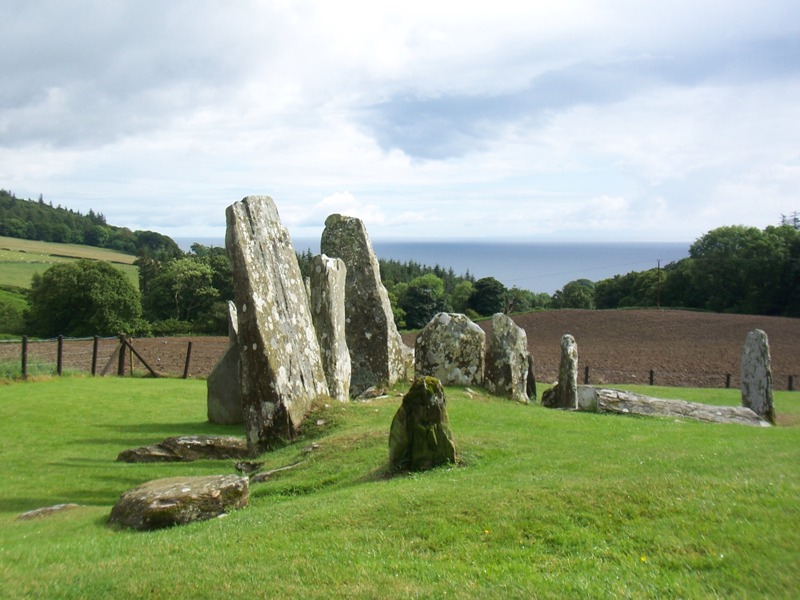 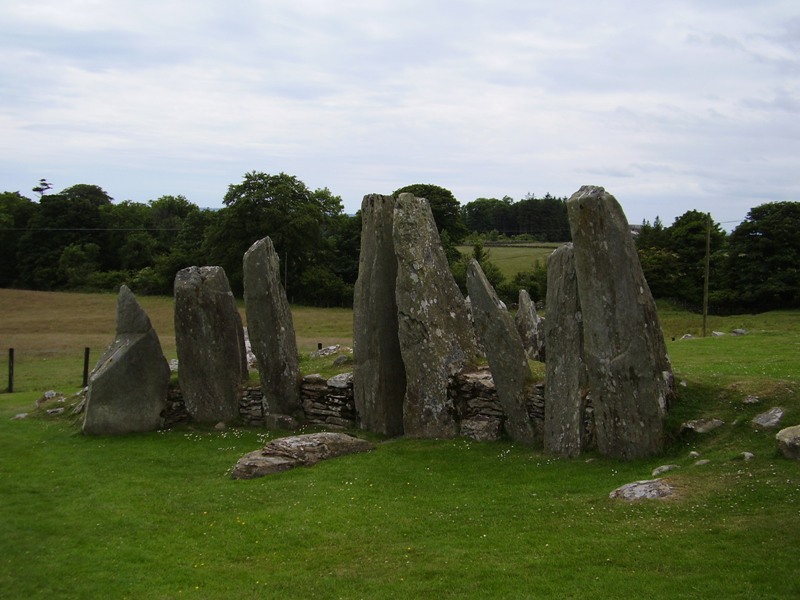 Another busy week of compiling customised tour itineraries, which has meant that I'm a bit belated with writing up the diary.

Our most recent travels have taken us into the Cairngorms and Strathspey. First on our list of visits was a journey on the Strathspey Railway. This is just a short stretch of railway that only takes about 40 minutes to cover the distance from Aviemore to Broomhill, but during those 40 minutes you travel back 50 years in time to the days of the Steam train.

This is a wonderfully nostalgic experience that is recreated with great attention to detail by a local team of volunteers who man the trains, ticket offices and do all the maintenance. The railway stations at Boat of Garten and Broomhill are well worth a visit as they are living museums and look like stage sets for a movie. Indeed the station a Broomhill is frequently used in the "Monarch of the Glen" TV series. I took the train ride whilst Mike had the cold job of standing on the railway bridge to get pictures of the train as it arrived. 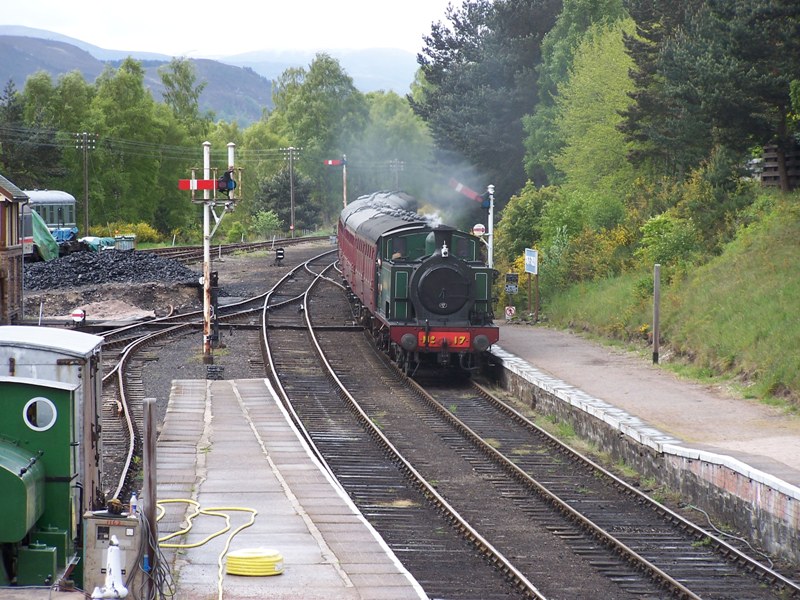 After the railway we headed into the Cairngorm National Park for a ride up the relatively new funicular railway. The road up to the funicular railway is a steep climb and it was only built as recently as the early 60's when Ski-ing was being developed as a commercial sport in Scotland. It was quite bizarre to pass the summery scenes of yachting and wind-surfing on Loch Morlich and then climb to a decidely wintery climate at the base station of the funicular railway. 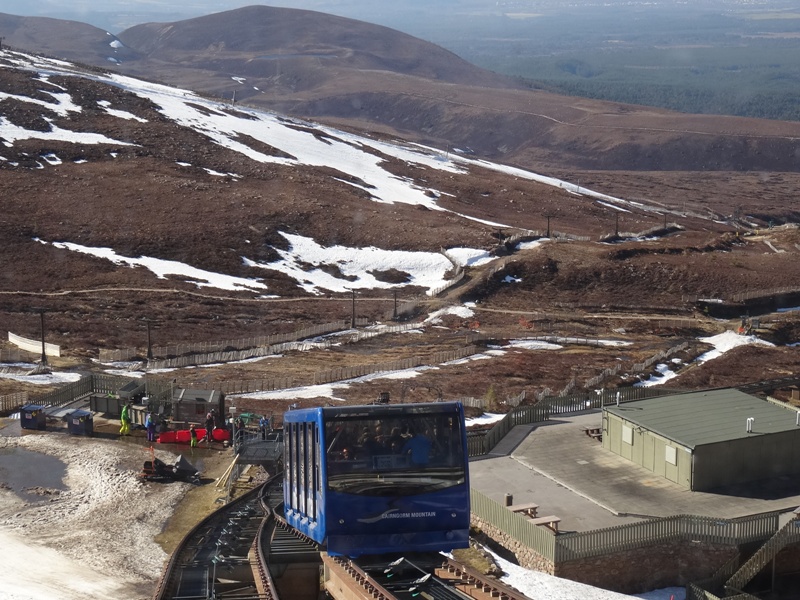 The new funicular railway is a neat feat of engineering with 2 carriages on a linked cable sharing the same piece of track with a clever passing place midway up the slope. The ascent seems quite sedate, but the descent is a lot more exciting as you get a much better view looking down the track. At the top there is "The Ptarmigan, but you can't access the mountain from the Ptarmigan in summer for environmental protection reasons. Having said that, it was snowing (!!!) when we visited so you really wouldn't have wanted to wander about outside for too long.

After all Mike's whinging during our last batch of distillery tours, I decided to let him have a day off the driving so that he could at least get one sample of the Dalwhinnie malt. Unfortunately, we couldn't extend our budget to buy any of the great choice of unusual malts on sale so Mike had to content himself with his taster. 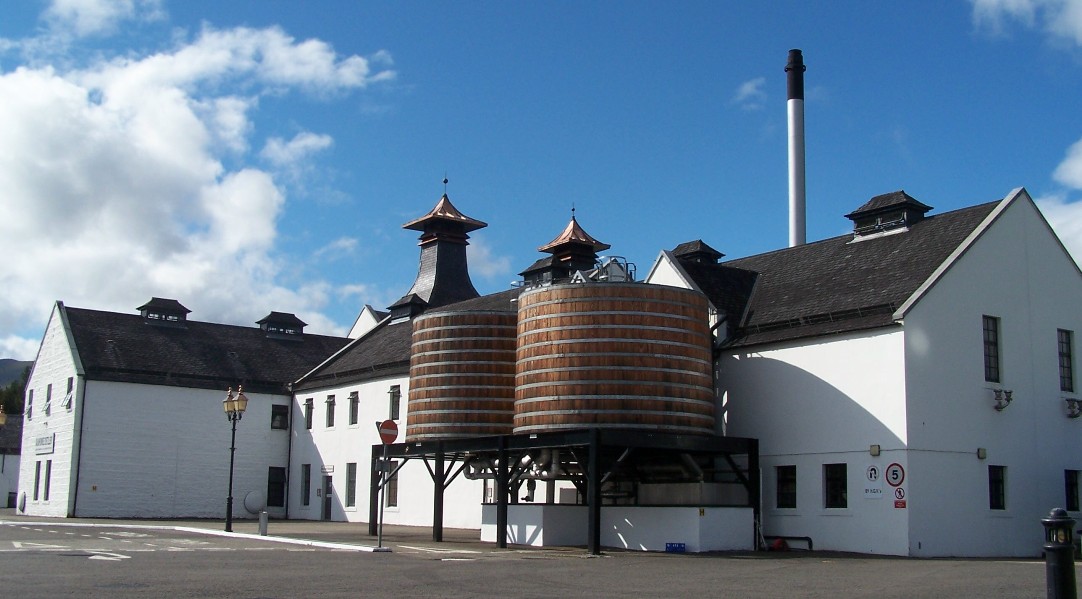 Last week our Scotland Travel Diaries were all about Castles, this week the subject is Whisky...hic! Or more accurately Whisky Distillery Tours.

Some people will be very envious when they hear that we did 4 distillery visits in 2 days. I admit it was very enjoyable, but it was also very frustrating because I had to decline a lot of free whisky samples so that I could drive from distillery to distillery. Consequently, I only managed to get one sample of whisky during the whole weekend.

First on our list of visits was the very charming Strathisla Distillery in Keith. Distilleries don't come much prettier than this. One of the appeals of Strathisla is the way that all the equipment is crammed into the old buildings with their exposed wooden beam roofs. It feels much more traditional and haphazard than the more modern distilleries with their efficient layouts and large still rooms. 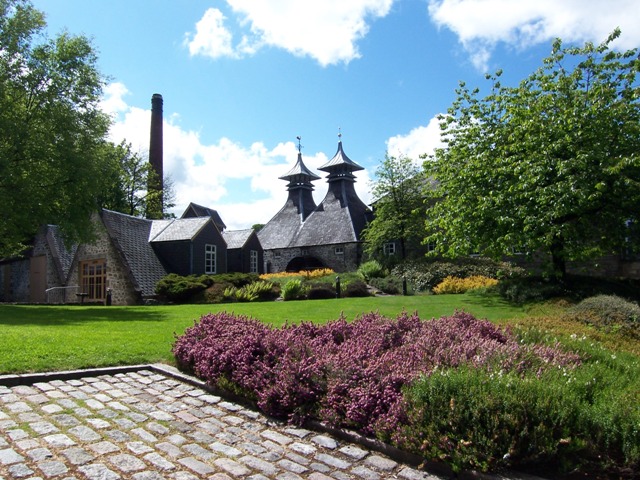 After Strathisla, we made a sprint along one of my favourite roads, the B9014 from Keith to Dufftown, home of The Glenfiddich (and quite a few other malts). I like driving and Lancia cars are built for roads like this. Going from Strathisla to Glenfiddich is quite a big change. After the small scale Strathisla, Glenfiddich seems to be like a whisky theme park. Very professionally done and very popular with tourists from all over the world thanks to the amazing range of languages that the tour can be delivered in. 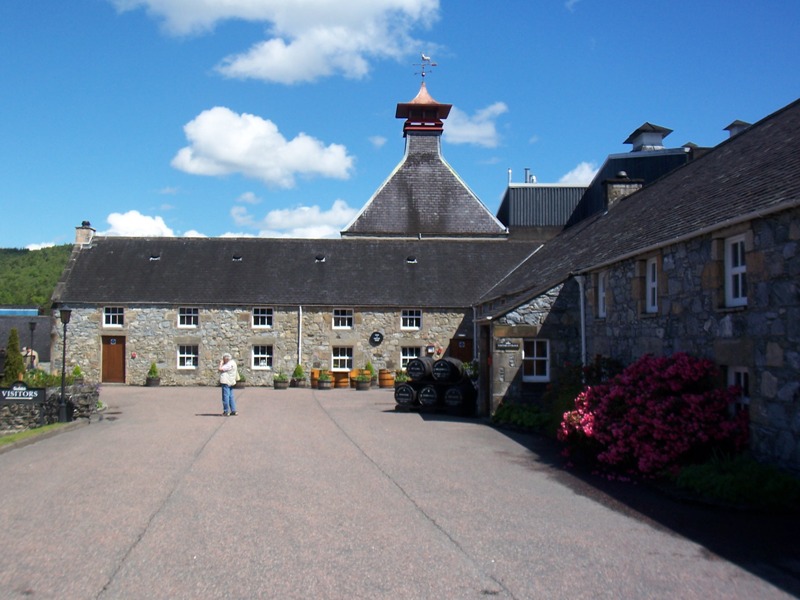 Next up (bear in mind that we haven't had a drink yet!) was Aberlour. This distillery offers a relaxed 2 hour tour with a special tasting session at the end which takes an hour in itself. Great stuff, but very frustrating when all you can do is sniff and not gulp! 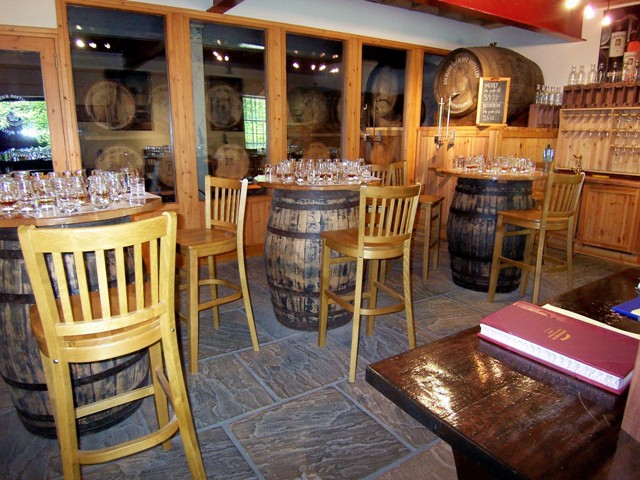 We closed our day with a trip to Elgin Cathedral to get some great views and new photos from the towers. If ever you go to Elgin cathedral you should be warned that only one tower has access to the roof. Aurelia didn't realise this, so I challenged her to a race to the top! She took the wrong tower so I had a quiet chuckle whilst I waited for a rosy cheeked Aurelia to finally join me on the viewing platform. 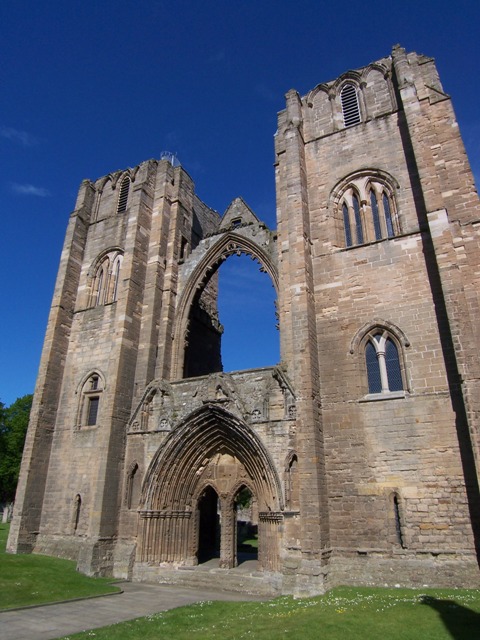 A special mention must go to Joe at the Fiddichside Inn in Craigellachie. His bar is a brilliant example of how country pubs used to be in Scotland. No jukebox, no fruit machines, nothing fancy just a bar, a few stools and a great choice of whiskies. Nearly all Speyside whisky as you might expect. The no nonsense approach also applies to the prices, £1.50 for a Macallan. God bless 'im!!!

But please don't all rush to the Fiddichside Inn. If customer numbers get into double figures, it starts to get a bit cramped. You have to experience the place to appreciate just how intimate this little pub is. 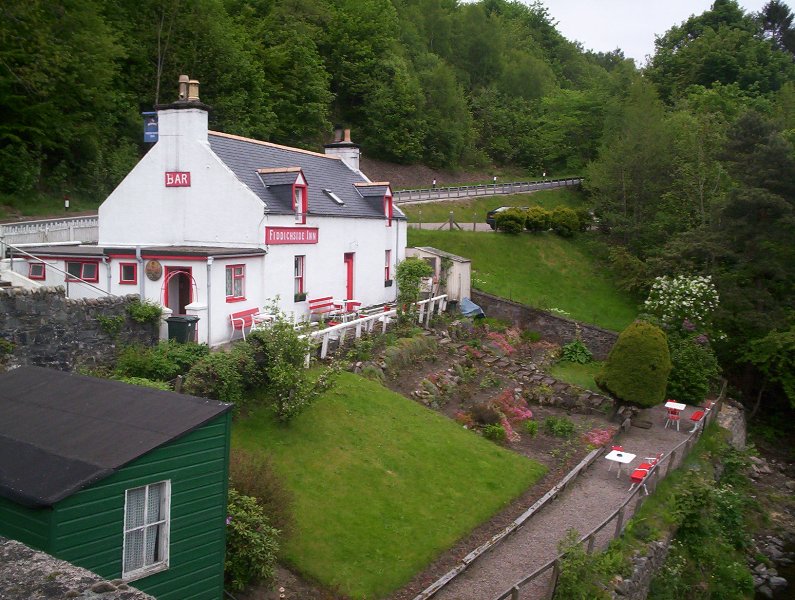 Next day and we started with Glen Grant Distillery, where we had a personally guided tour of the distillery's beautiful gardens. These gardens are well worth a visit and you can even ask to have your whisky sample served to you there. It was a lovely sunny day and enjoying a whisky under the Gazebo in the garden was very tempting, but once again we had to be sensible and decline as the 4 hour drive home was still to come. Not to worry, we have a visit to Dalwhinnie lined up soon and Aurelia can drive next time... 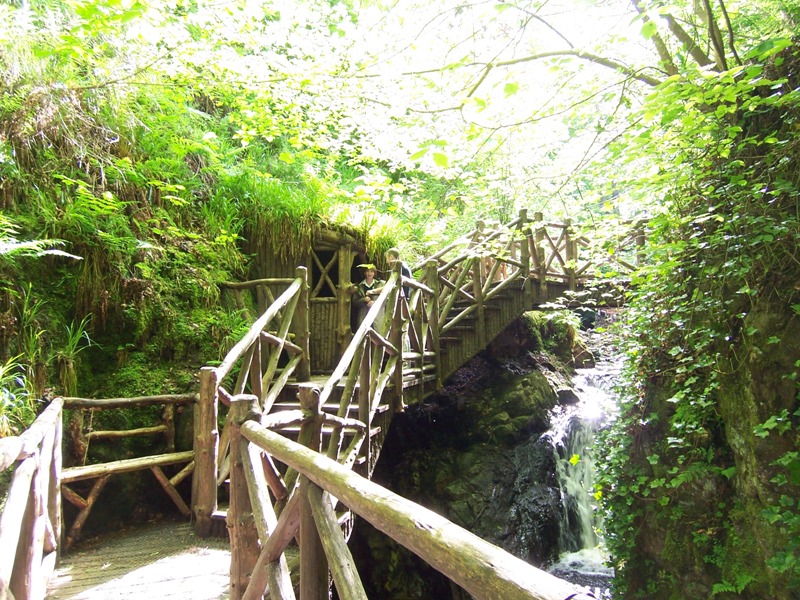