We’ve been away in the Speyside area, a part of Scotland that is synonymous with whisky.

But we were in Speyside with the explicit purpose of NOT visiting distilleries. That might seem a bit daft, but there was a reason behind our actions.

Whenever we do a Whisky themed tour, we always include alternative activities for the people who don’t think whisky is the “water of life”. Fortunately, Speyside is not far from the Moray Coast where there are lots of places worth exploring.

In this blog, we show you a “Whisky Free” day trip option that you could do if staying in the Aberlour / Dufftown area in the heart of Speyside.

As with all our touring routes, we have driven this and done all the activities so the suggested schedule is based on our actual timings.

This map shows you the route that we drove and the schedule is explained step by step in the text below.

We started our day trip from a cottage located in Carron which just beside the new Dalmunach distillery and just a 5 minute drive to the west of Aberlour. We had planned our day around a 9:30am start and a 6pm return, but you may not wish to do all of the things that we have suggested so the tour time could be shortened.

To make the most of our time, we took a pack lunch with us and we would recommend that you do the same.

First up on our list of visits was the unusual double-tiered bridge at Craigmin. This is a place that is proper “Secret Scotland”. There are no road signs to it, and nothing directs you to the footpath. We love places like this as the lack of signposts makes the eventual discovery of the bridge all the more rewarding. 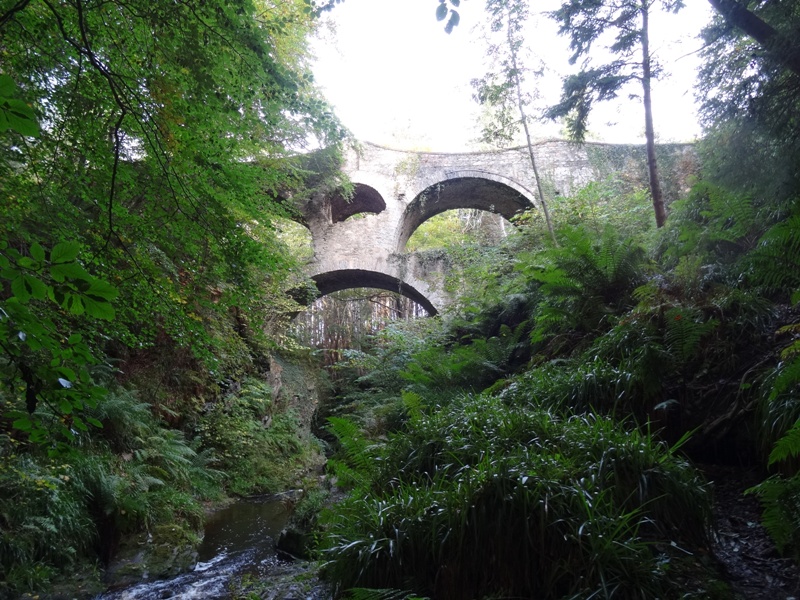 The bridge is a curious design and its history is a bit vague. Robert Adam is credited for the design as he was the architect of nearby Letterfourie house which was accessed via this bridge.

It has been speculated that Robert Adam added the top tier of 3 arches on top of an earlier single arch bridge. The heightening of the bridge being necessary for horse drawn carriages to be able to cross the Burn of Letterfourie which runs through a steep sided gorge. 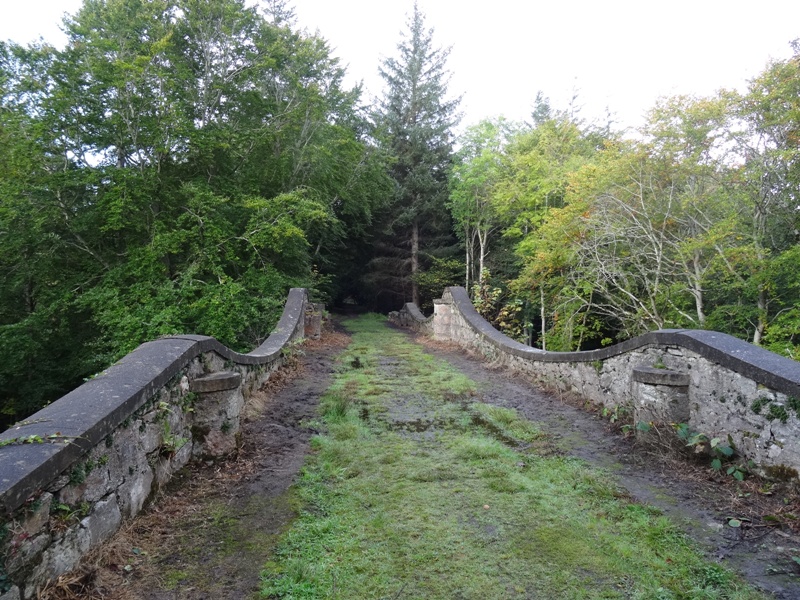 It is a very unusual bridge and appears to be inspired by the design of Roman viaducts. Sadly, despite being recognised as a structure of historical importance, the bridge has not received any restoration work so you might feel a little bit nervous about exploring around it.

If you feel bold enough to go exploring, you will find that the lower tier of the bridge has a small passageway that lets you access the central arch. 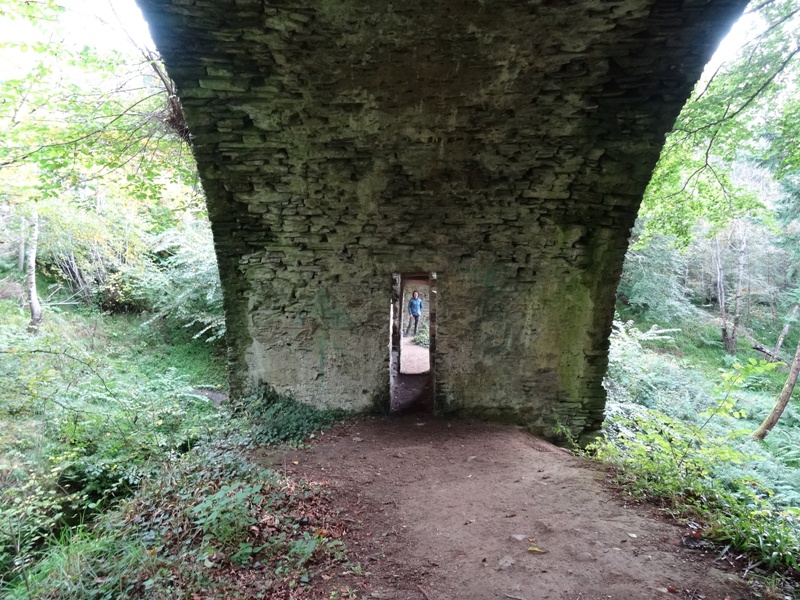 Portknockie is not a town that merits much of your time. The town stands on cliffs above a small harbour where you will find a paddling pool for kids, a few fishing boats and some public toilets. 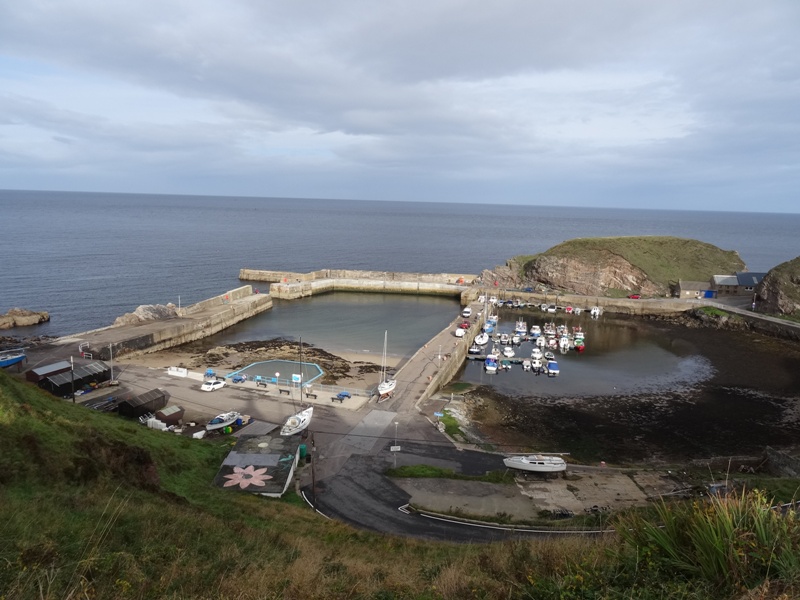 But we aren’t guiding you here for the town, the appeal of Portknockie for the tourist is the “Bow Fiddle Rock” which lies a short distance east of the harbour and is easy find if you follow the signs that point you to the “Moray Coast Trail”.

The “Bow Fiddle Rock” is an impressive geological wonder and photographs don’t do it justice as they don’t convey the scale of this weirdly shaped outcrop. 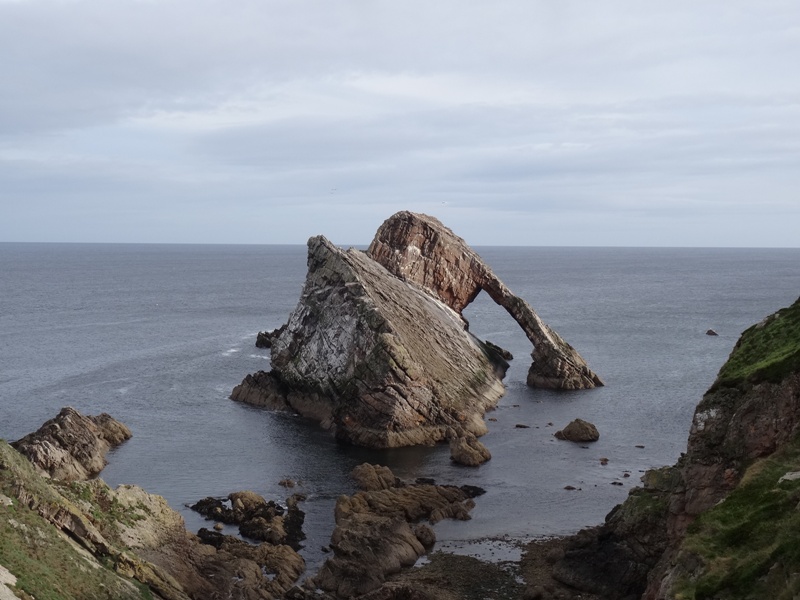 The rock is cut off from the land by the sea, but it is possible to pick your way down to the rocky shore opposite the rock. And if you do go down to the shore, you will find some large caves carved out of the same slanting upthrusts of Quartzite rock that the Bow Fiddle rock is formed from. Cullen town gives its name to that wonderful Scottish dish “Cullen Skink”. If you’ve never tried this traditional Scottish soup, then you should add it to your Scottish bucket list.

The key ingredients of Cullen Skink are smoked haddock, potatoes, leek or onions and milk. You’ll find some variations on this with some restaurants using cream or adding in smoked salmon and mussels too. It tastes a lot better than you’d probably expect it to. 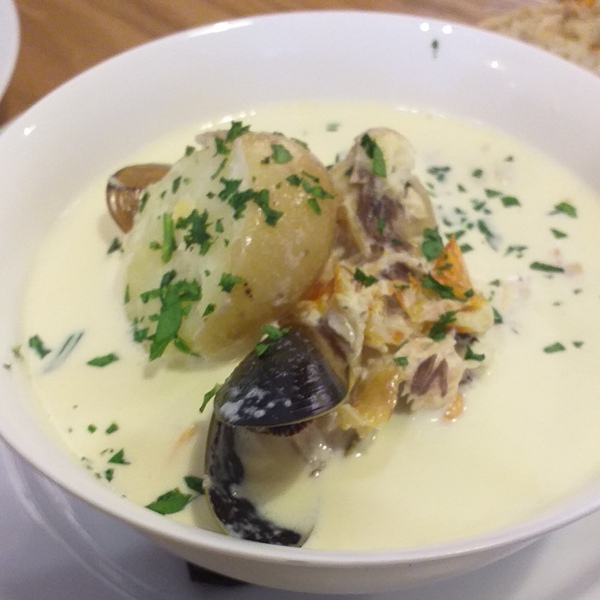 Cullen is a town of 2 halves. Down beside the beach, you find the “Seatown” which has neat rows of cottages that would have been homes for the fishing community at Cullen Harbour. Heading inland and uphill from the harbour, you have the town centre in what is known as New Cullen. There is also an “Old Cullen” where you can visit a beautiful church with some sections that date from the 13th century. Parts of Robert the Bruce’s second wife, Elizabeth de Burgh are buried here. The rest of her lies in Dunfermline Abbey with Robert.

Curiously, the Kirk at Old Cullen still receives a regular payment from the estate of King Robert the Bruce. This money pays for them to offer prayers for the soul of Elizabeth. This might be one of the longest running standing orders in Scottish history.

On this occasion, we didn’t visit the Old Kirk and instead spent an hour on the beach exploring rock formations known locally as “The Three Kings”, before wandering through the narrow streets of Seatown. From Seatown, we followed the path along the old railway viaduct to visit Castle Hill where you can see the earthwork remains of a fort that would have stood here during the times of Robert the Bruce. 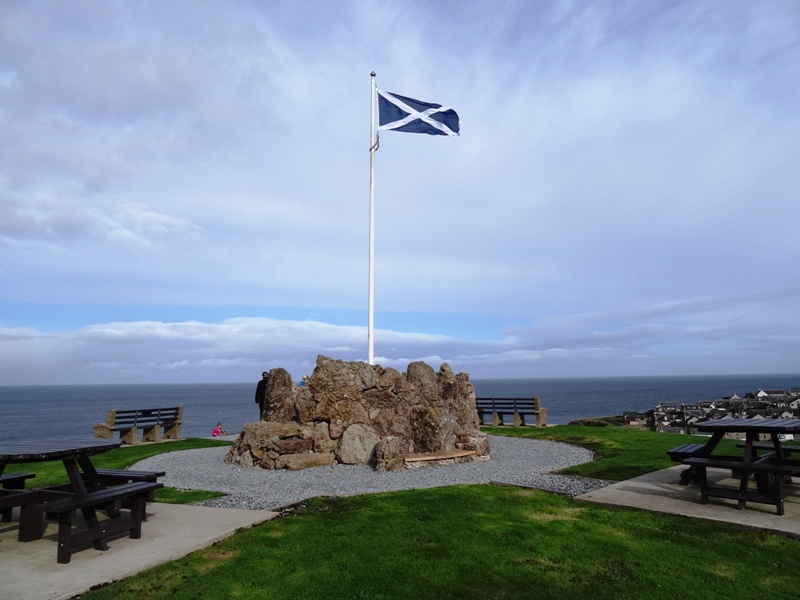 Findlater Castle is just a short hop along the coast to the east of Cullen. The castle is a ruin perched precariously on a small rocky peninsula. It is hard to imagine a more difficult place to build a castle.

The name is said to derive from the Gaelic “fionn leitir” which means “white slopes” or “white cliffs”. So the correct pronunciation should sound something like “Fin-letter”. 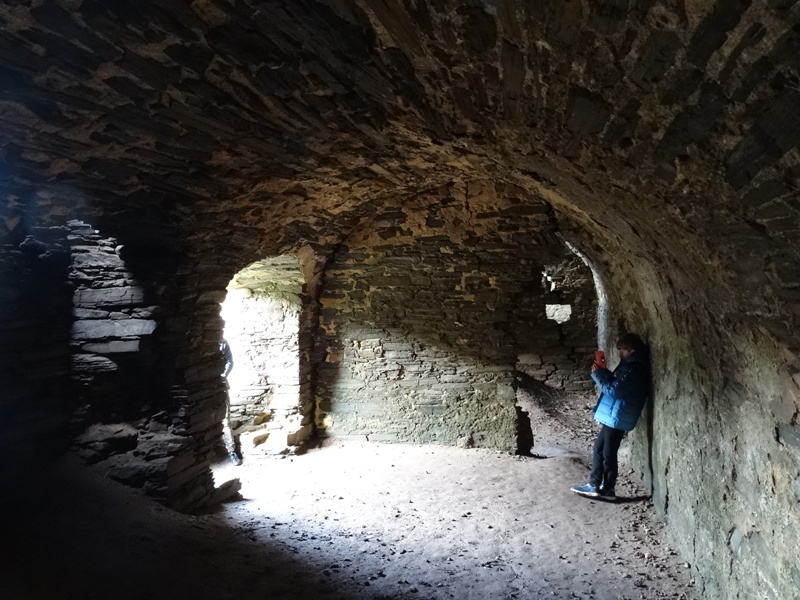 From the car park, which is beside Barnyards farm, there is a short walk along a farmtrack to get to a viewpoint above the castle. There’s an information board at the viewpoint that gives a brief history of how the castle switched ownership between the families of Ogilvy, Sinclair and Gordon before being abandoned in the 1600’s. You can descend a very steep and often slippy path to the castle. If you are daring, you can even explore inside some of its intact lower chambers. But we would advise you to take extreme caution if exploring the castle as there are signs of subsidence everywhere and the risk of it collapsing into the sea is just a matter of time. We spent a little over an hour at Findlater as the path to the castle wasn’t signposted and we turned left when we should have turned right. We also stopped here for a picnic and then climbed down to explore inside the castle. You could save some time here if you just stop to take a photo at the viewpoint.

There are some charming coastal villages in this part of Scotland, with Pennan, Crovie and Gardenstown making regular appearances on Instagram. But there is a village that lies a couple of miles inland from Portsoy that we rate as a contender for the prettiest place in Scotland . 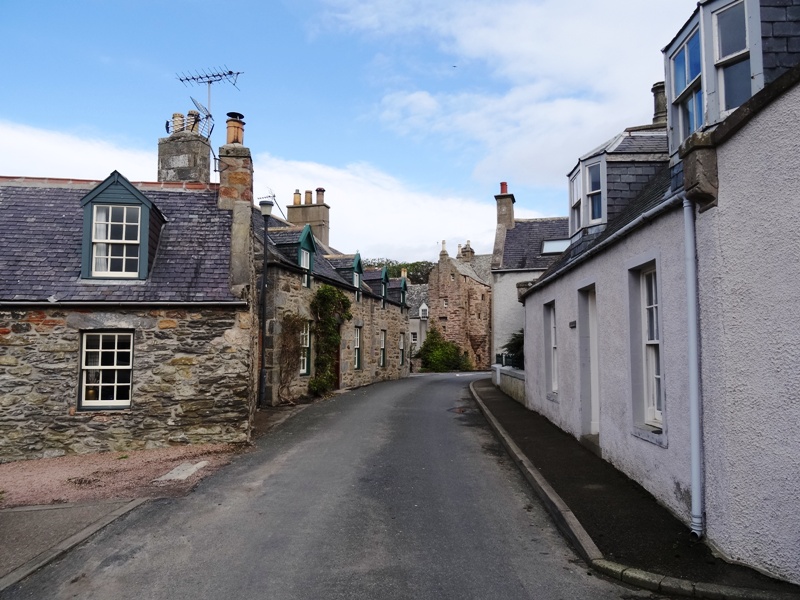 The village we are referring to is Fordyce. It’s a jumbled collection of old houses and meandering side streets that radiate out from a beautiful little castle and old kirkyard which stand at the village centre. 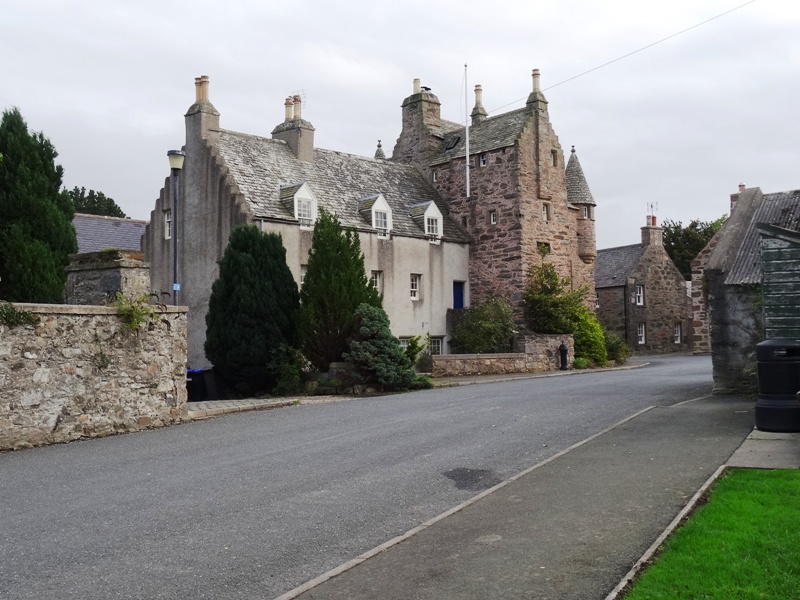 The castle dates from the late 1500’s and is available as a self catering holiday let sleeping 4. The village also has a nice restaurant / cafe which is located in a former church on the village's West Church Street. We had planned to make this our coffee and cake stop on the day trip, but there was a function taking place so we had to switch to Plan B.

Portsoy, more specifically the Ice Cream shop in Portsoy, was our Plan B after failing to get coffee and cake at Fordyce.

Portsoy has developed around its harbour which was built in the late 1600s and is surrounded by some attractive old warehouses. The streets that head inland from the harbour are also home to some attractive buildings. Whilst not as postcard-pretty as places like Pennan, the harbour area of Portsoy is attractive enough to justify a photo stop. The area around the harbour also has some attractive artwork and, if you visit between 9 am - 3 pm on a Tuesday to Friday, you can buy some super fresh fish from Sutherland’s fishmonger, which is right beside the harbour. The growth of Portsoy as a town owes a lot to fishing, but the town was also a centre for cloth-making and the mills for this industry were powered by water from the Loch of Soy which is now an attractive pond in a park in the heart of the village.

If you walk east along Links Road from the old harbour, you come to the Salmon Bothy which now houses a museum that explains the history of the industries that made Portsoy. Entry to the museum is free, but the volunteers who run it will be very grateful for any donations you wish to make. But we were visiting Portsoy on a mission to get coffee and something sweet to keep our energy up. The solution to our quest was the excellent Portsoy Ice Cream shop on Seafield Street, just opposite the War Memorial.

The array of flavours is vast and you are almost guaranteed to find some flavour combinations that you’ve never seen before. Indeed, they seem to take a pride in experimenting with new flavours and have a range of over 100 flavours of ice cream including Lemon Meringue Pie, Cadbury Creme Egg, and Lime Cheesecake. Inchdrewer Castle isn’t the sort of place that will be of interest to everyone so this is something you could drop from this day trip to allow more time elsewhere.

I had been interested in visiting the castle for a while as I had read the story of its ghost and had heard that it was a place that had a spooky atmosphere. The building was partially restored in the 1970’s and is still in surprisingly good condition despite lying unoccupied for the last 50 years.

Since 2014, Inchdrewer has been owned by a Russian millionairess who bought the castle unseen for £400,000. SHe had intended on making it a family home, but maybe the ghost has put her off that idea. So what’s the story with the Ghost?

Well, according to the legend, the owner of the castle, Lord Banff, returned to Inchdrewer unexpectedly early and discovered his servants stealing from him. Caught by surprise, the servants panicked and struck their master causing his accidental death. Fearing the consequences of their actions, they decided to torch the castle to destroy all evidence of their crime.

Lord Banff would have been understandably miffed about this, so his soul continues to haunt the castle seeking to take revenge on his murderers. Strangely, whilst I was trying to film something at the castle for our YouTube Channel, my camera suddenly died. I checked the battery and it still showed charge, but every time I tried to record the camera ceased working. When I tested the camera later that evening, it worked fine… spooky!?

So there you have it.

A Day Trip from Aberlour, in the heart of Speyside, and there wasn’t any whisky involved. Well, apart from the one I had in the evening when I put my feet up to write up this Blog.

It is a full day and involves about 80 miles and 2 hours 15 mins worth of driving, but the journey is broken into lots of short sections, so it is good for kids who need to burn off energy.