It’s July and the Scottish School Holidays are in full swing.

Like most Parents, this creates a challenge for us as we have to combine our work for Secret Scotland with keeping Junior from spending all day on YouTube or the XBox.

There once was a time when we just jumped in the car and set off to explore around Scotland without worrying about ways to keep a child entertained. But things are different now, and we have to plan our trips with activities that will keep Junior enthused.

I reckon this gives us an advantage over travel writers such as Rick Steeves, because we write our guides with an understanding of what it's like to travel with kids. I’m assuming Rick doesn’t do his traveling with an impatient kid asking “Are we there yet?”

With this in mind, I planned our return trip to Gairloch so that it had a bit of a theme that would appeal to our 11 year old son. Fortunately (like his Dad), he is very much into planes and anything to do with World War 2.

So here’s the stuff that we got up to.

Poolewe, despite its peaceful surroundings in the North West Highlands, once played an important role in the Allied effort to win the Second World War. It was from the sheltered waters of Loch Ewe that the Arctic Convoys departed on their extremely hazardous supply runs to Russia.

An expansive complex of Coastal Defences and Anti Aircraft Guns were installed around the shores of Loch Ewe to protect the ships of the Arctic Convoys as they assembled. You can still see lots of these buildings around the shores, but the best place to go to appreciate the scale of this wartime effort is at Rubha nan Sasan where a memorial has been erected to the memory of the sailors who perished in this campaign. 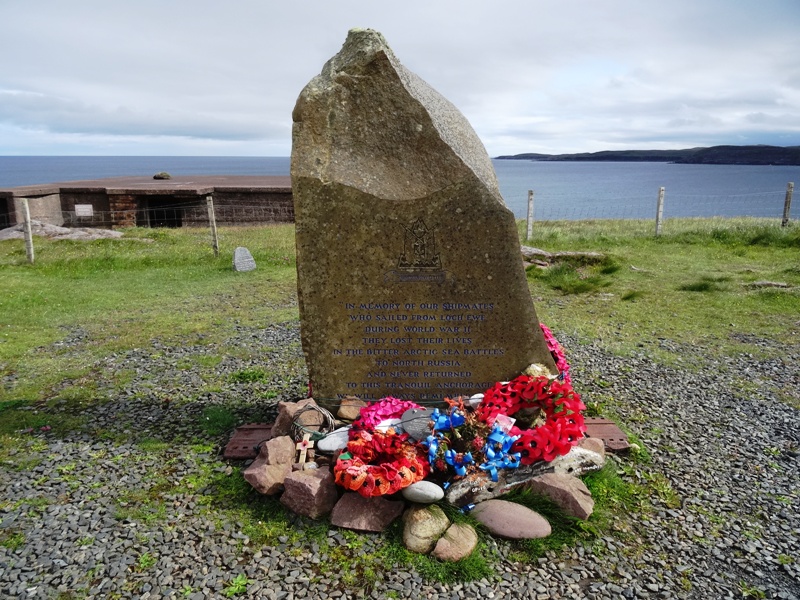 Appropriately, Rubha nan Sasan translates from Gaelic as “the headland of difficulty”. The soldiers based here in gun batteries exposed to the weather of the Scottish Highlands probably had a few other nicknames for it. 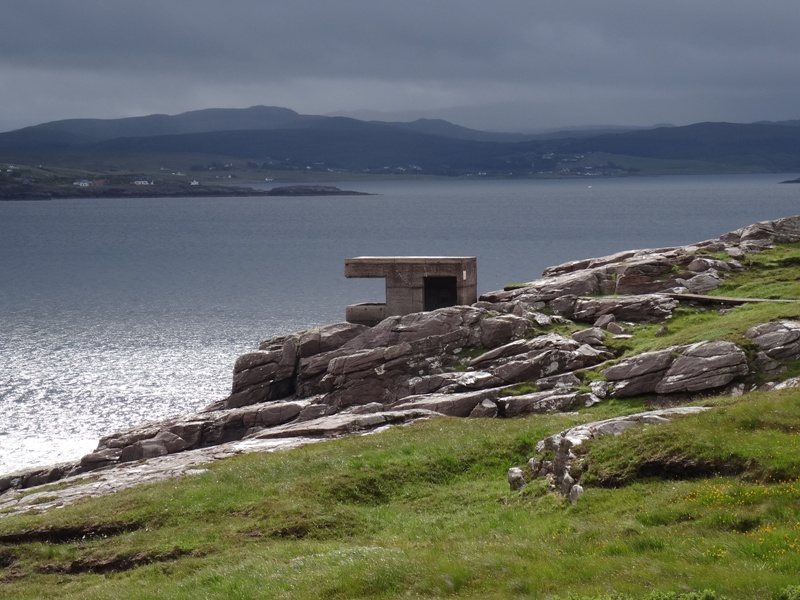 It’s a bleak and windswept spot about a 30-minute drive along a dead-end single-track road that starts in Poolewe. But during WW2 this area would have thronged with servicemen and it is said that the Army personnel outnumbered the locals by a ratio of 3 to 1.

The locals don’t seem to have objected to this influx of soldiers, as they benefited from the infrastructure that came with the military base. For example, the A832 road that links the railway station at Achnasheen to Poolewe, was built during the war so that the Army could get supplies. Prior to that, it was not much more than a cart track.

Fortunately, Loch Ewe never came under any serious attack as it was too far for the Luftwaffe’s bombers and I don’t believe any bombs ever fell here. The gun crews manning the defences probably found it to be quite a boring place to be stationed, but I’m sure they were very glad that they weren’t onboard any of the ships running the gauntlet of dangers on the way to Murmansk. 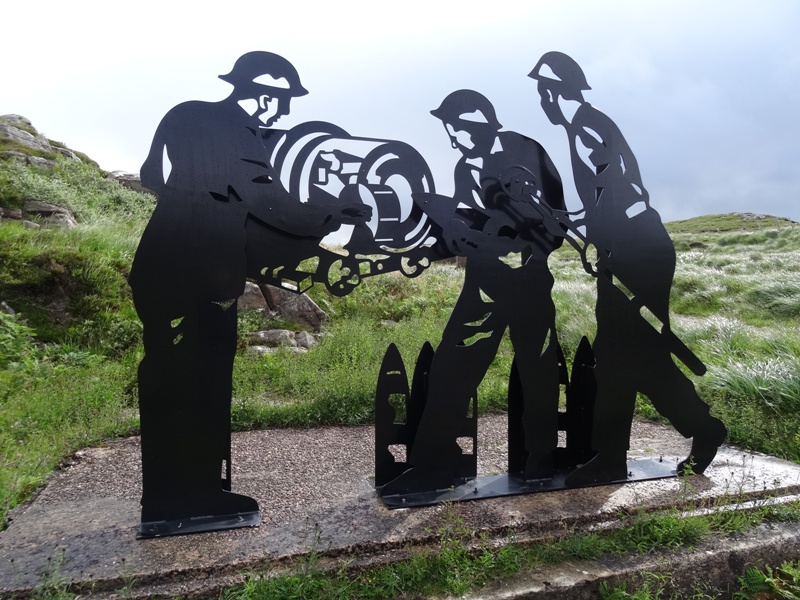 If you are interested to learn more about the history of the Arctic Convoys that sailed from Loch Ewe, there is an enjoyable little museum in Aultbea with a very reasonable entrance fee (Adults £5 and Children are Free). The best bit of the museum for Junior was the dioramas of model aircraft, but there’s lots of information to digest and many of the convoy veterans have donated personal mementos to help bring the story to life. 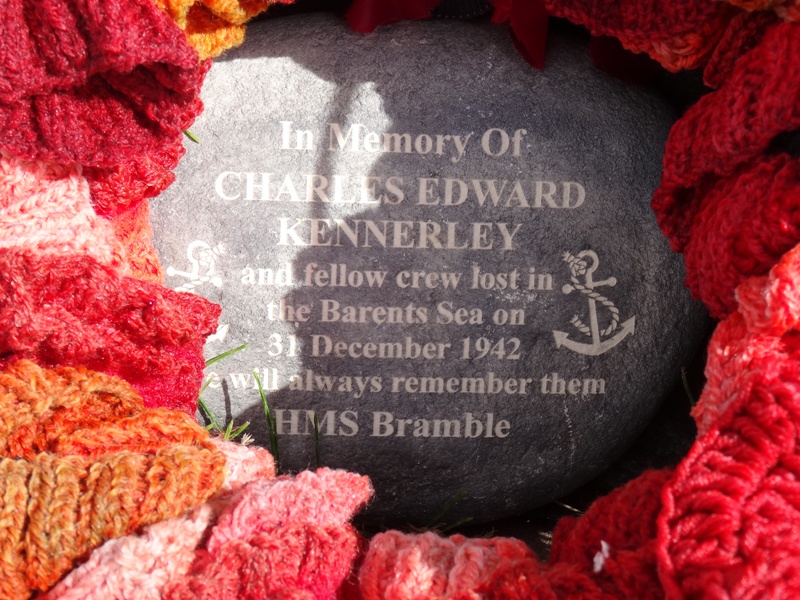 Aircraft crash sites are always hauntingly sad places. We’ve visited a few in our travels, such as the Liberator crash site on Beinn Nuis on Arran. But there is something about the atmosphere at the Fairy Lochs crash site that really hits you. 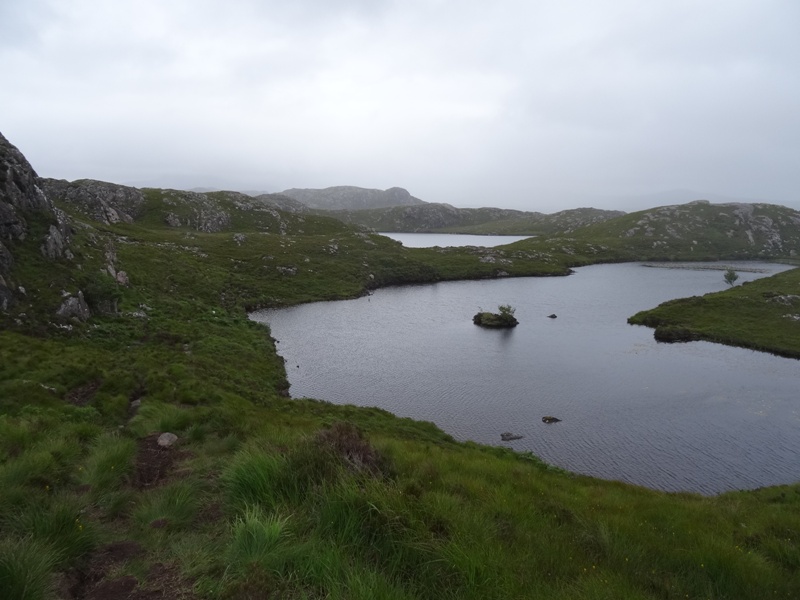 As you climb over the hills to get to the Fairy Lochs (the name is a modern invention there’s no folklore of fairies here), the first thing that you will probably see is the grey metal of a propeller blade rising out of the still waters like King Arthur’s Excalibur. 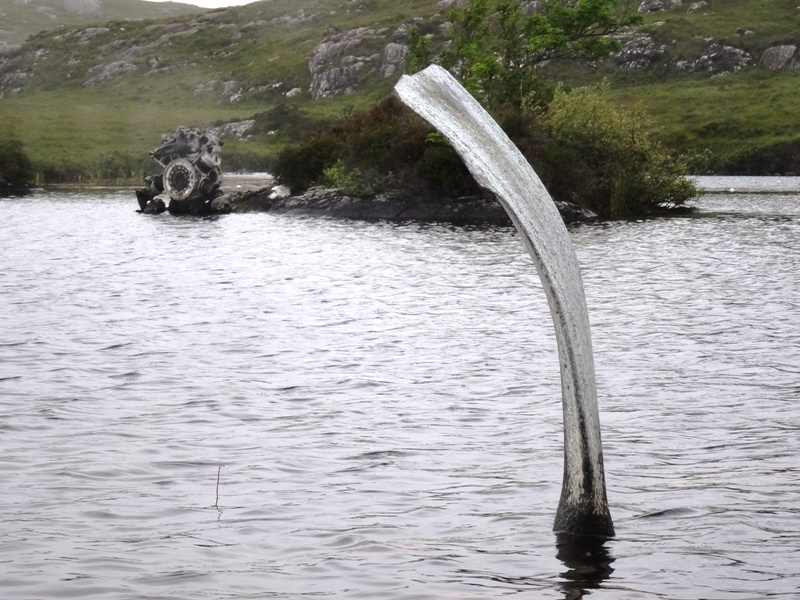 Then, as you get close to the water’s edge you gradually become aware of more and more pieces of metal scattered around the hillside and below the water. 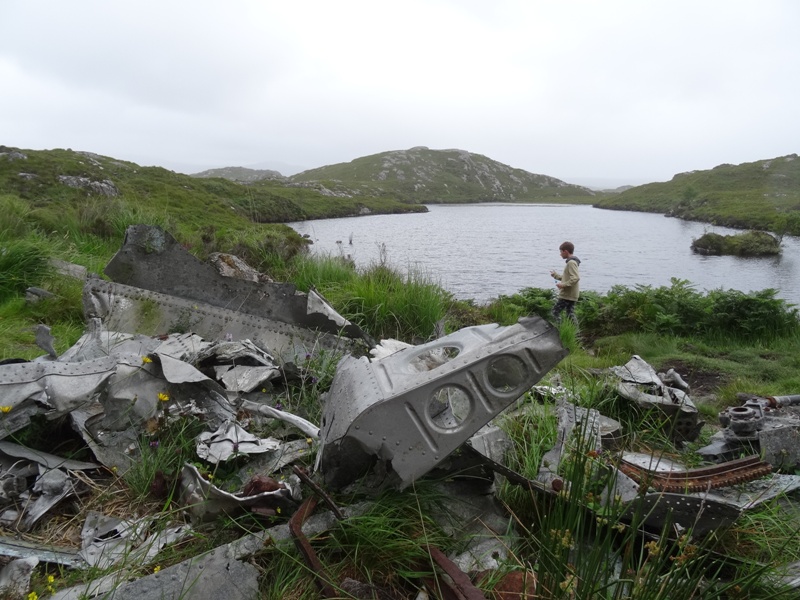 A simple memorial plaque has been mounted on a rock beside the loch. It tells you the home states and ages of the 15 souls that perished in this accident. Sadly, they were almost all in their early 20’s. But what makes this crash even more tragic is the fact that it happened after the War, and the servicemen were returning home. 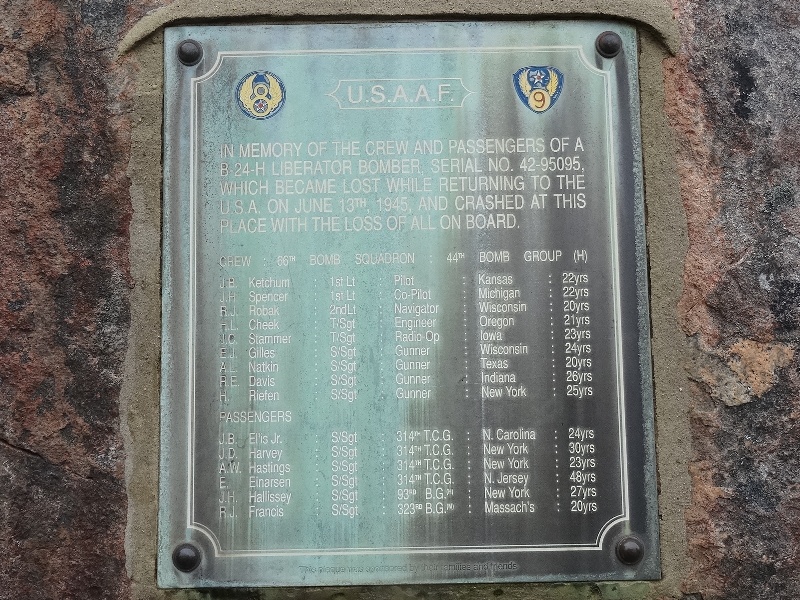 I imagine the men onboard would have been relaxed and in high spirits, looking forward to being reunited with family and grateful that they’d survived the conflict. But that happy mood would have quickly changed in their last few moments.

It seems a navigational error caused the B24 Liberator bomber to clip the summit of the nearby Slioch mountain. Fragments of the plane were later found near its summit. The plane then limped on for another 10 miles before crashing into moorland not far from the village of Badachro. There were no survivors.

The Beinn Eighe Ridge is a special place for me. I first hiked this ridge when I was 17 and the experience is etched in my memory. Not just because of the scenery, but because of the school teacher that was leading us.

He knew all the history of the area and was a great storyteller. He told us about the tragedy of the Lancaster bomber crew whose fate could have been so different if their plane had flown just 15 feet higher. 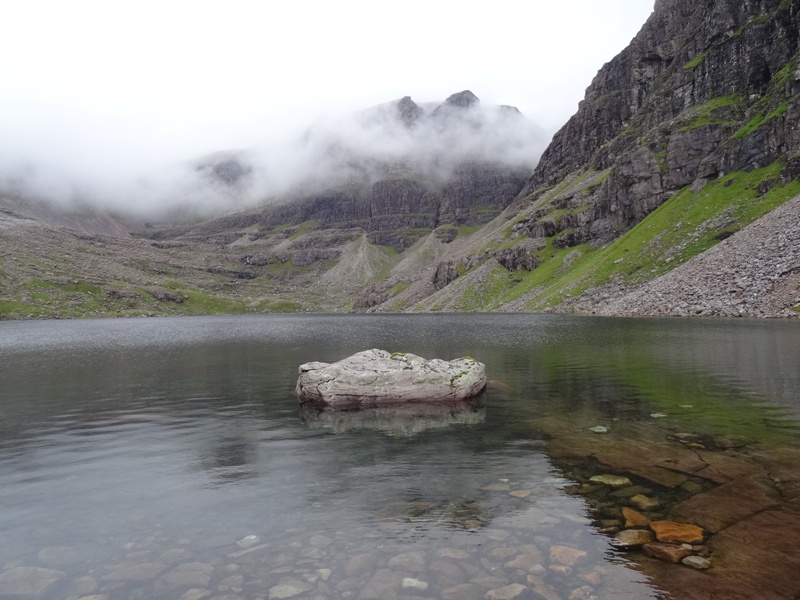 This accident took place in March 1951 during a training flight for navigators. It was night time and the plane was returning from an exercise that had taken it far out over the North Atlantic. The crew would have been fatigued and small errors may have been made which led them to think they were flying a safe distance from the craggy peaks of Beinn Eighe.

They were just 30 minutes flying time from their home base at RAF Kinloss when the Lancaster flew straight into the top of the mountainside known as the “Triple Buttresses”. If they had been a mere 15 feet higher they probably would have flown on safely and been oblivious to their close shave. Sadly that wasn’t to be.

The hike up to the corrie at Coire Mhic Fhearchair is actually a really enjoyable trail. This is largely thanks to the excellent path that you follow. After a steep initial ascent, the gradients ease off and you gain height at steady pace until you reach the waterfall which cascades from the corrie. 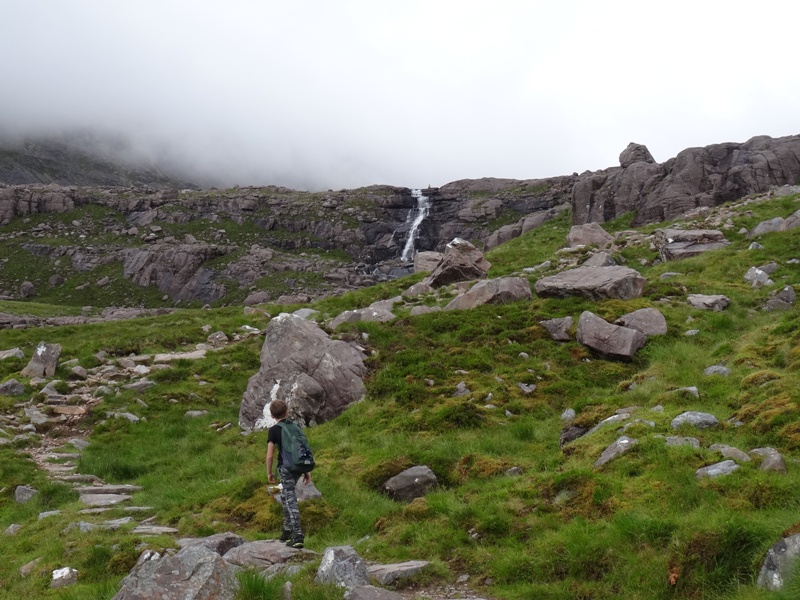 But you don’t mind the short but sharp ascent past the waterfall as by this stage you know you are nearing the corrie. Your first sight of the “Triple Buttresses” is a “WOW” moment. The awesome scale of the mountains, and the green of the water make this place feel like a land where fairytale monsters might live. 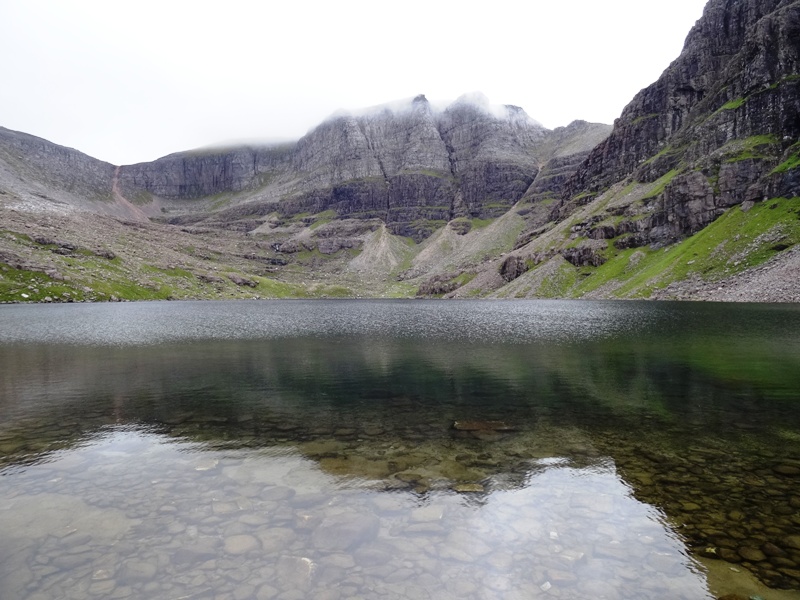 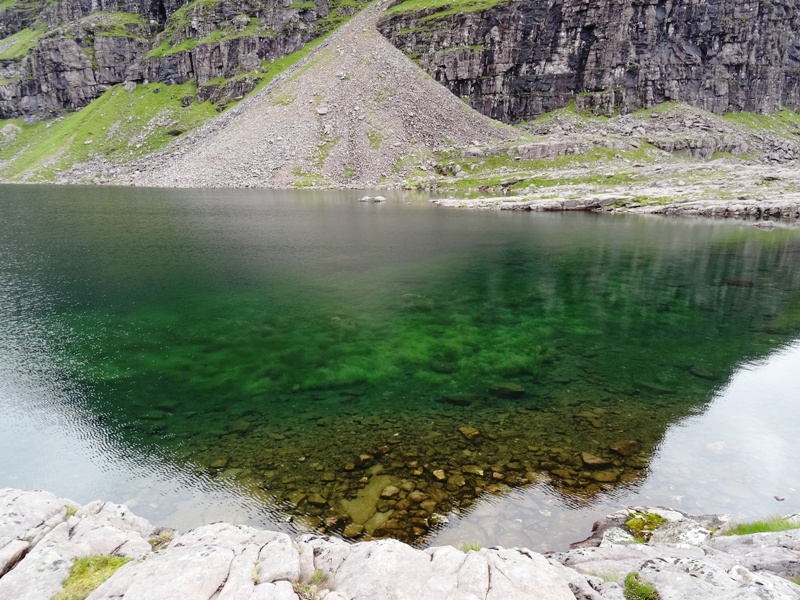 There seemed less aircraft wreckage than I remembered from my previous hikes, but falling scree must have buried lots of fragments over the years. A large piece of undercarriage with a mainly intact rubber tyre stands out prominently near the bottom of the gulleys. And there are lots of pieces of aluminium on the slopes and in the water below the Triple Buttress. 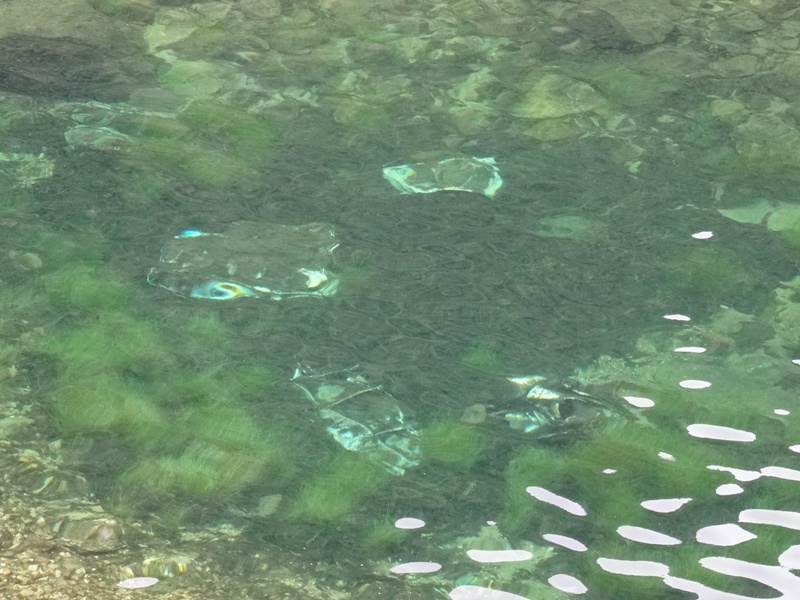 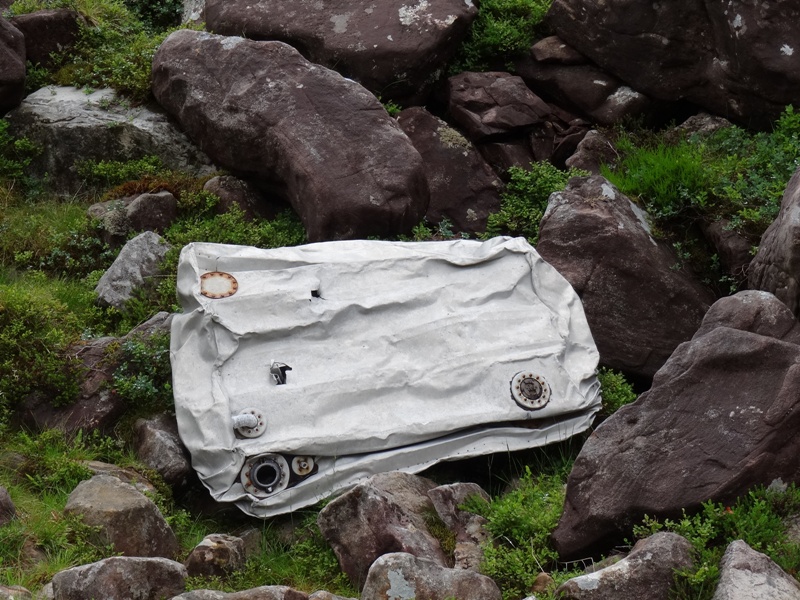 I anticipated that Junior’s interest in the hike would wane once we reached the crash site, but he was dauntless and full of enthusiasm for tackling the almost vertical scramble up the scree chute that leads onto the Beinn Eighe ridge where you can quickly bag 3 Munroes. 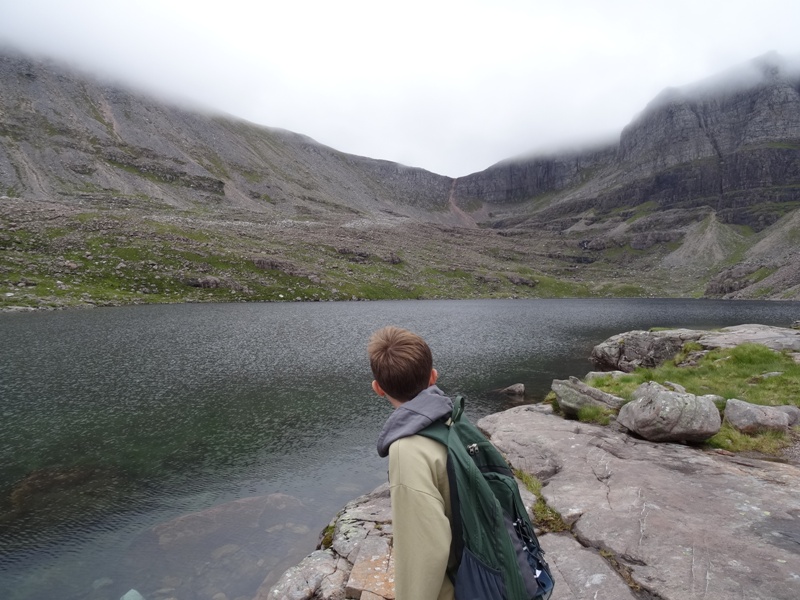 If anything, I was more nervous about the climb, and it greatly impressed me how calm and assured my son was about navigating a climb that he’d seen several adults decide to quit. 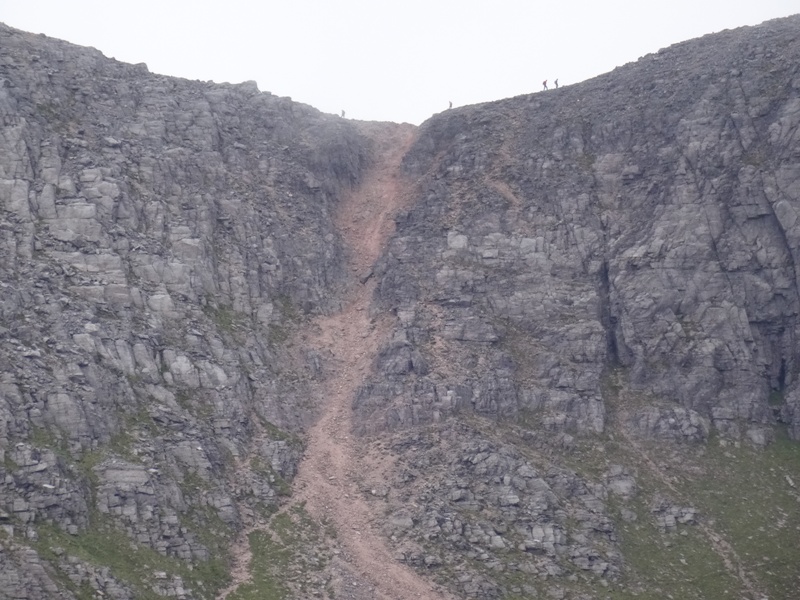 So we managed to see a plane wreck, bag 2 more Munroes, and then, after a 6-hour hike, reward ourselves with a Pizza on the way back to our B&B. 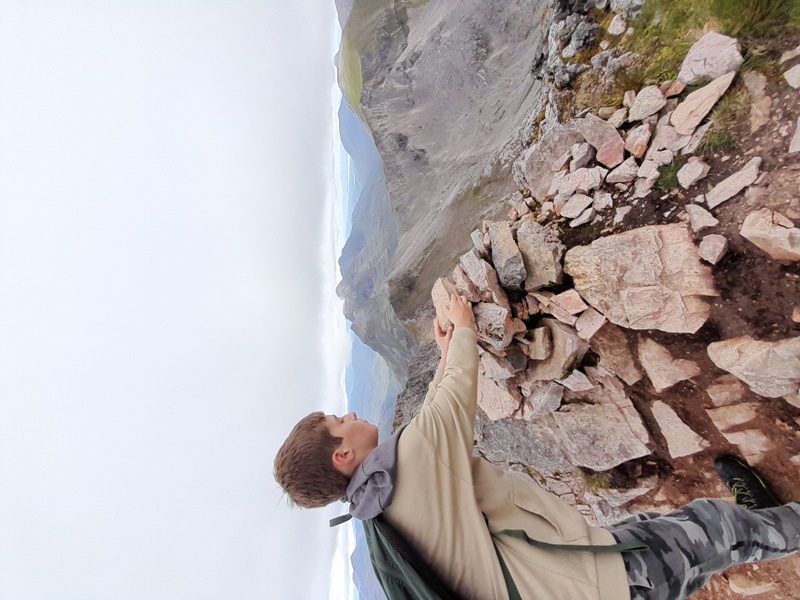 What more could a Boy want? 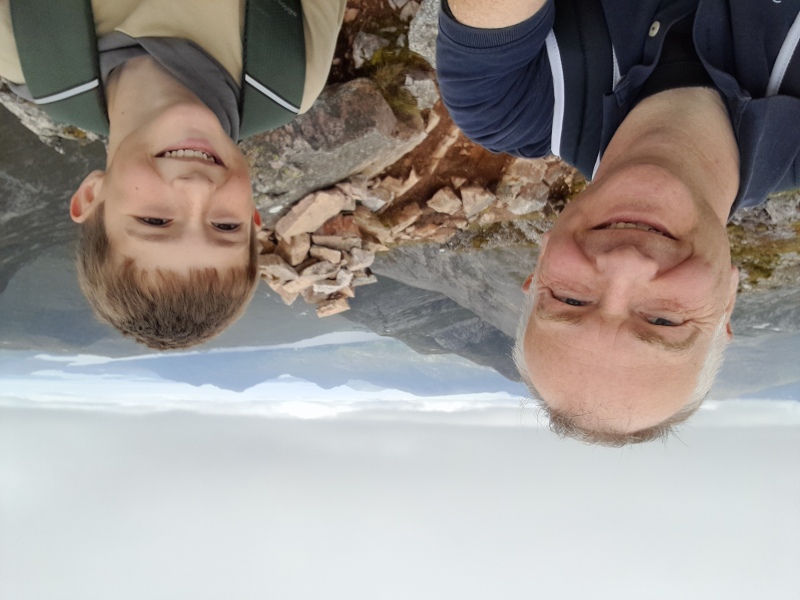