We’ve just got back from a few days on the Isle of Arran so that is going to be the subject of this month’s Blog. I feel sure that I must have done a Blog about Arran before, but this often overlooked little island deserves to be mentioned more often in our Blogs. I have to admit that I am a big fan of Arran and it holds many happy memories for me as my family used to holiday there almost every single year for most of my childhood. The fact that we could enjoy returning to same island every year says a lot for the charms of the place.

The great thing about Arran is that it manages to encapsulate all the iconic images of Scotland within its modest 167 square miles. Indeed, a few months ago I received a request from a Spanish girl who was coming to Scotland for 2 nights in October. She was flying into Prestwick airport on a Friday night and departing on the Sunday. She wanted me to suggest an itinerary that would let her and her boyfriend experience the “essence of Scotland” in a weekend. I immediately suggested she head to Arran as she could get to the ferry in under an hour from the airport, she could rent a car on the island, or tour around by bus, and the island had a little bit of everything that is considered to be typically Scottish. Unfortunately, she ignored my advice and missed out on all the good stuff that I’m going to tell you about here.

So let’s start by listing all the things that visitors look to find when they head to Scotland and then I’ll show you how Arran ticks all the boxes;

In the last few years, Scotland has seen a handful of new distilleries popping up around the country, but when the Arran Distillery opened at Lochranza in 1995 it was really quite a novelty as the whisky industry had been in the doldrums for many years. Although currently the only distillery on Arran, there was once more than 50 stills estimated to be in operation on Arran. I say “estimated” as many of them were not officially there, if you know what I mean. The distillery at Lochranza has a very good visitor centre with a waterfall in the reception area. That maybe sounds a bit tacky, but it is actually done very well and the café is worth a visit as it has panoramic views from its large windows. 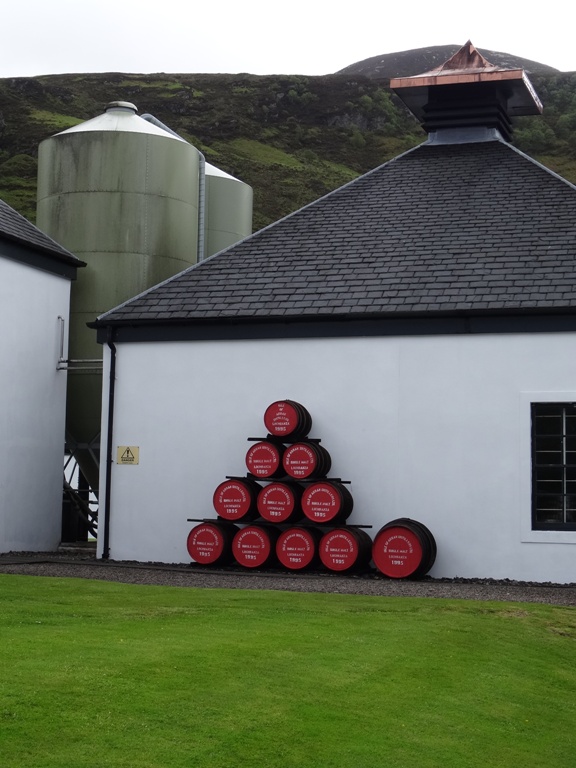 If you are looking to visit a grand castle with ornate rooms and furnishings, Arran has that option nicely covered with Brodick Castle. A stronghold of some sort or another has stood on this site guarding the safe anchorage in Brodick bay for many centuries, but the oldest parts of the existing castle date from 1588 and the bulk of the building is of mid 19th century vintage. A visit to Brodick Castle is a “must” when coming to Arran and you can easily fill a half day with a tour of the castles’ lavishly furnished rooms and extensive grounds. (Update: during 2018 the castle was closed for a major refurbishment, but the "new and improved" castle re-opens in Easter 2019). 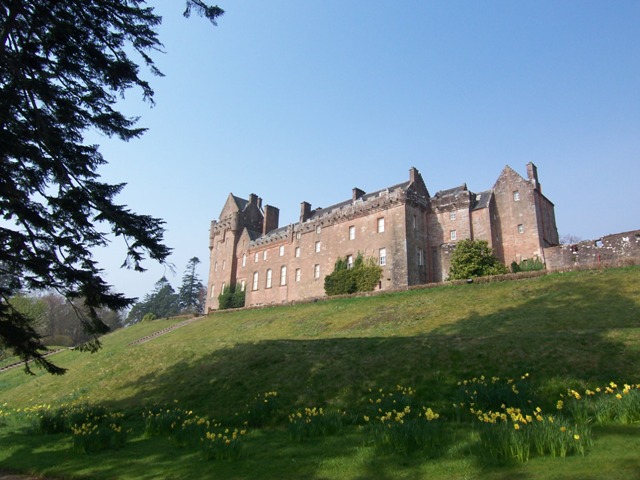 For those that prefer their castles to be more “Braveheart” than “Downton Abbey, there are the ruins of Lochranza Castle which stands upon a narrow spit of land in the sea loch of the same name. The castle has undergone repair works in recent years so the walls are now safe and you can explore inside the castle. If you don’t mind the dark and aren’t too easily spooked, you can go into the claustrophobic little room that would once have been the dungeon / prison cell. The castle is unmanned, but there are enough information boards to give you an understanding of how the building evolved and you can see the various stages of construction in the stonework. Lochranza castle is also claimed to have been the inspiration for the design of the castle in the Tintin story “The Black Island”. You can see some similarities in the red sandstone blocks used on the corner edges of the tower. 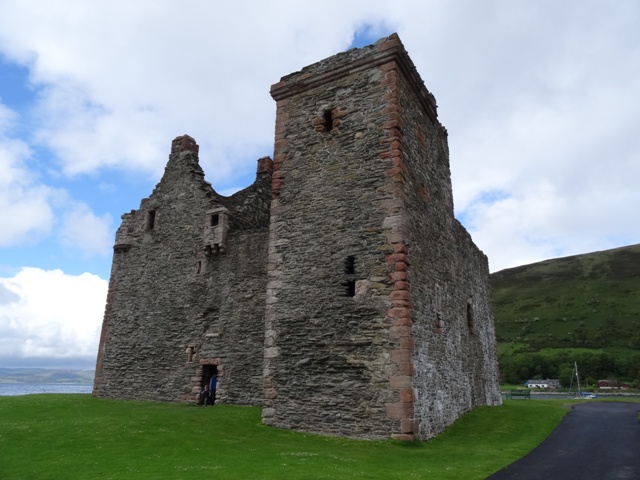 If asked to pick my favourite standing stone site, Machrie Moor on Arran would be one of the ones at the top of my list. My reasons for choosing these stones are the timeless quality of their location. If you visit the more famous Callanish or Ring of Brodgar sites on Lewis and Orkney (respectively), you are within sight of modern houses and it isn’t so easy to imagine yourself transported back through time. Whilst it is true that from Machrie Moor you can make out some farm buildings, they are in the far distance and easily ignored. Machrie is also a curious site as it has a cluster of secondary stone circles scattered around a dominant arrangement of 3 stones that stand about 18 feet high. There would originally have been 7 or 8 stones in the circle, but the others fell down or were pulled down to be made into more useful things like mill stones… no really, it’s true and you can see one such millstone on site. The archaeological interest of Machrie Moor isn’t just about the stone circles as there is evidence here of early dwellings and farming. Excavations have revealed human activity here as far back as 4500BC. With that much history, it is hard not to feel something spiritual about the place.

For live music and bit of craic with the locals, we’d recommend that you head to either the Fiddler’s Music Bar on Brodick sea front, or the Ormidale Hotel beside the playing fields in Brodick. The Ormidale is run by a local family and  "Tommy", the barman, has been a steady fixture of the hotel along with the colourful random tile designs in the Gents toilet. The best thing about the Ormidale is the cosy little bar with its open fire place, boat shaped bar and quirky little wooden tables which are cut in the shape of the island. The Ormidale plays host to live music nights, quiz nights and disco nights. There’s nothing pretentious about the Ormidale, so just bring yourself and a sense of humour. We should also mention the Arran Folk Music Festival which takes place in the first weekend of June and involves a variety of venues around Brodick.

The scenic diversity is the thing that makes Arran special and is one of the key reasons why we would highly recommend this island to anyone who is trying to get a flavour of all that Scotland offers in a short timescale. Arran sits astride the Highland Boundary fault line, so within the 20 miles that it takes to go from North to South, you travel through a landscape that has the rugged mountains of the Highlands down to the gentle rolling hills and fertile farmland of the Galloway Coast line. We really can’t think of any other place in Scotland that gives you so much variety within such a small area, it’s no wonder that the island is titled “Scotland in Miniature”. Although none of Arran’s mountains are actually high enough to be termed Munros (3000 feet plus), they don’t fall far short and they provide enough challenge to keep any adventurous hill walker happy. That said, the tallest mountain, Goatfell, has a good path up it that doesn’t require skill or high levels of fitness.

If you are looking for Wildlife you’ll be pleased to know that Arran is home to at least one pair of Eagles and these are most often to be seen soaring in the area of Glen Sannox and Glen Chalmadale. Indeed, the eagles have been adopted as the logo of the Arran Distillery at Lochranza and you might see the eagles if you keep a look out from the large roof windows in the café at the distillery visitor centre. The coastal waters around Arran are also visited by Basking Sharks in summertime, but the sightings of these large fish seem to be on the decline. I have been lucky enough to watch basking sharks “cruising” along a few hundred feet offshore, but I had the advantage of an elevated view point on the hill above the village of Corrie. A much easier form of aquatic wildlife to spot is the resident seals that lounge on the rocks just opposite the entrance to Brodick Castle. You will see the seals here so often that you’ll start to wonder if they are actually statues. But by far the easiest place to get up close to wildlife on Arran is at Lochranzsa Golf Course where the deer do their bit to keep the fairways in tip-top condition by neatly trimming any long tufts of grass. The deer are technically feral, but they've become so used to people that nothing seems to scare them much. 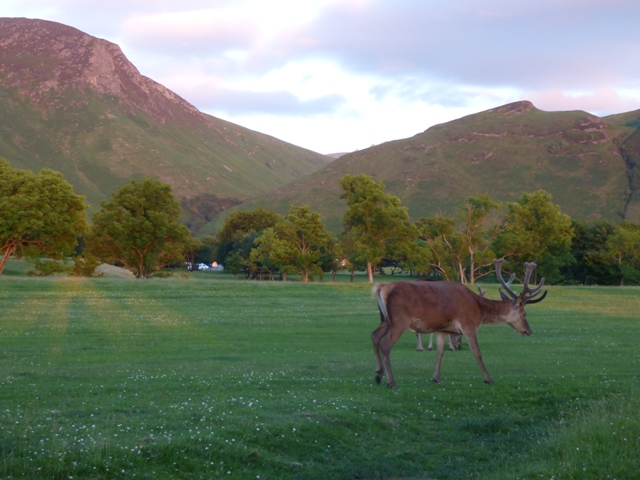 Arran boasts some very entrepreneurial types and the island has several successful brands that are exported all over Scotland and even the world. One of the island’s biggest success stories is the perfumery called Arran Aromatics. This is a great place to visit on a wet day, but you should make a point of visiting their factory shop if only to stock up on gifts for the family. Another successful enterprise is the Arran Cheese shop next door to the perfumery. And if you have a sweet tooth there is James of Arran the chocolatier in Brodick. On the other side of the island, and just south of the very picturesque hotel at Lagg, there is the Torrylinn cheese factory where you can buy local cheese flavoured with whisky and other good stuff. 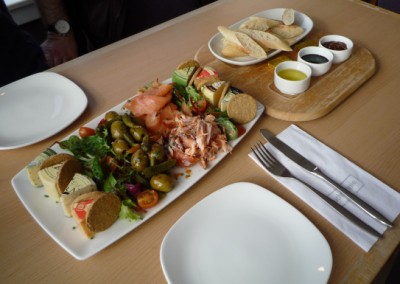 So you can see why we rate Arran as a great option when you are coming to Scotland for just a few days and want to get a taste for the country without exhausting amounts of driving. If all of this has got you interested, you’ll find a lot more information for exploring Arran in our Island Explorer tour plan..