The Scottish newspapers have recently been reporting that the Isle of Skye is having problems with its infrastructure which is struggling to cope with the massive influx of tourists. There are still places on Skye where you can escape the crowds, but the obvious tourist attractions (such as the Old Man of Storr, Kilt Rock, Quiraing, Neist Point, Fairy Glen and Fairy Pools), are so popular that the visitor numbers are spoiling their charm. If you are looking for an island experience where you won’t have to fight for a car parking space, or indeed won’t even need a car, you could consider the Isle of Lismore which is largely overlooked by most visitors to Scotland. This is an island that you can do in a day trip, but it is also a perfect hideaway if you want a slower pace of life to indulge in some “Me” time.

Lismore is served by two ferries; a small car ferry from Oban and and an even smaller passenger only ferry from Port Appin. If you really want to get from one end of Lismore to the other in one day, then you might want to take a car across, but we prefer to take the Port Appin ferry and then hire bikes on Lismore. The island is gently undulating so you will need to go through the gears on some of the hills, but the cycling isn’t too strenuous and there are very few cars on the island which makes it safe and fun for children. 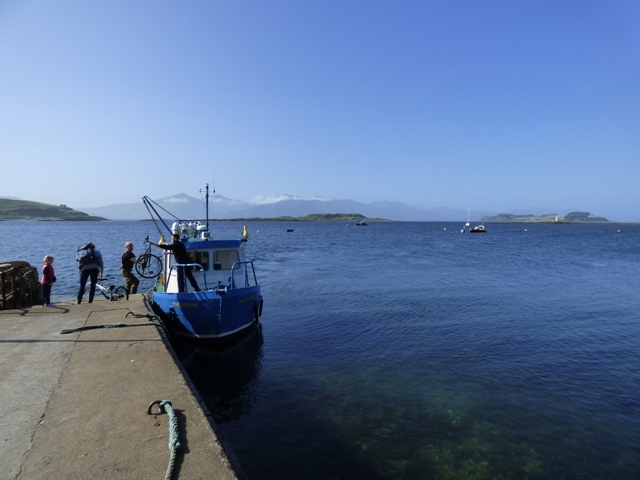 Without starting too early, a cycling day trip on Lismore can take in several of the island’s main historical attractions; Tirefour Broch, St Moluag’s Cathedral and Castle Coeffin. When we last visited Lismore we had a day of glorious sunshine and arrived on the island at around 11:15am. We probably could have arrived a bit earlier, but the ferry crew were in no great hurry so they let our son have a shot at steering the boat. I should maybe explain that the ferry boat is not much bigger than a small school bus and is really quite charming in a nostalgic way. 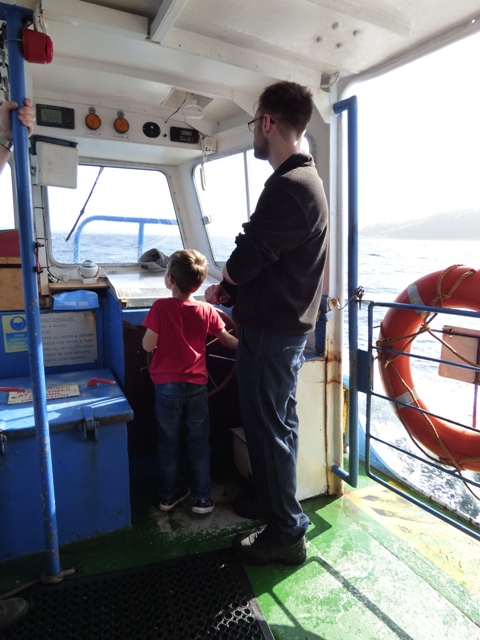 Cycling south from the ferry, our first port of call was the Iron age broch at Tirefour. You can follow a well surfaced farm road to within 300 yards of the broch. After that, you have to dismount and cross a field full of grazing sheep to get to the broch’s ruins. The Iron Age builders of this fortification chose a good site as it has commanding view over the eastern approaches to Lismore and is defended on the western side by quite a steep and slippy slope. The grazing sheep have added to the defenses by leaving several slippy hazards of their own. There are information boards at the broch will tell of some interesting finds of Norse jewellery that would suggest the broch was inhabited as late as the 11th century. Archaeologist also found an enamel brooch of Roman origin which suggests that the inhabitants may well have been engaged in some far-reaching trade activity. 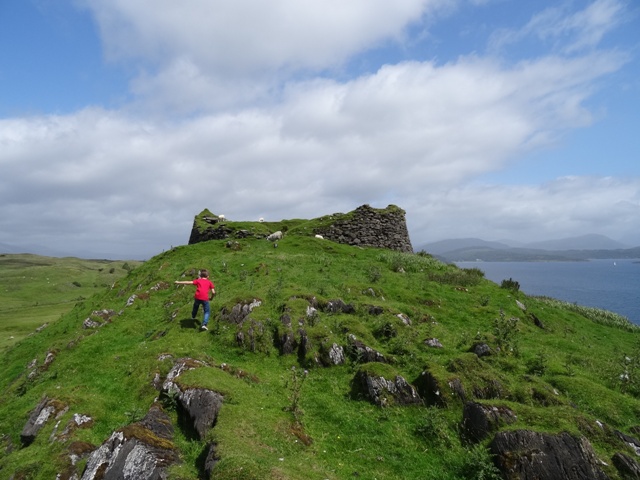 Back on the bikes, we re-joined the main road (these things are relative and we only saw 5 cars during a 6 hour period) and continued south to the grand and slightly misleadingly titled St Moluag’s Cathedral. St Moluag was one of the early Celtic missionaries and a contemporary of the more famous St Columba who created the monastic settlement on Iona. According to legend, St Columba and St Moluag both wanted to establish monasteries on Lismore so they agreed to settle the matter with a race by boat to the island. As the boats approached Lismore, Moluag could see that he might be beaten by a nose so he cuts off a finger and threw it onto the shore to secure his claim as the first to arrive on Lismore.

Nothing remains of the church that Moluag would have established in the 6th century, but there is archaeological evidence which indicates the presence of an early monastic settlement on this site. The building that you see today is a modest sized church and only earned the title of “Cathedral” as it was the seat of the Bishopric of Argyll and The Isles. The building dates mainly from the mid 1700’s with a few architectural features incorporated from a church that stood here in the 13th century. Of more interest than the church, is the exhibition of 8 grave slabs  from the 14th - 15th century which are on display in a small open air shelter. The stones are carved in an artistic style particular to this region and would have marked the graves of important and wealthy individuals. 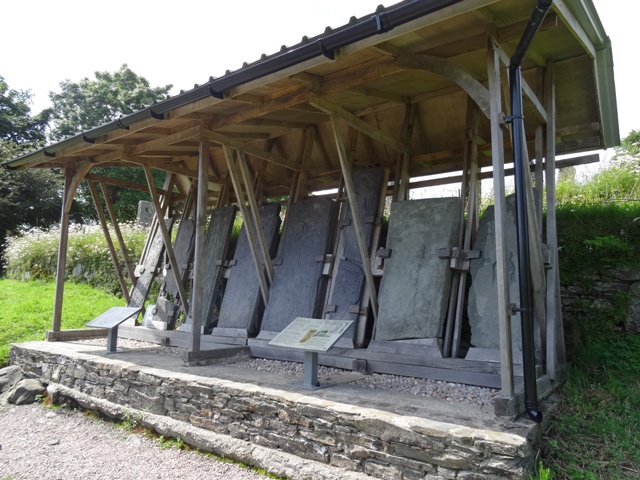 Just a little further along the road from the cathedral, you come to a semi-dilapidated farm building with a track that runs along its right wing. The track isn’t signposted, but go through the gate and follow your nose down to the shore and you will find the ivy clad ruins of Coeffin Castle. Vegetation has overgrown the remains of the castle so it almost looks like it could be an unusual geological feature rather than a man-made construction. Our 6 year old described it as looking like an “Octopus” and that’s a good way to convey the appearance of the remaining sections of wall that project like tentacles from a central mound of collapsed stone and mortar. 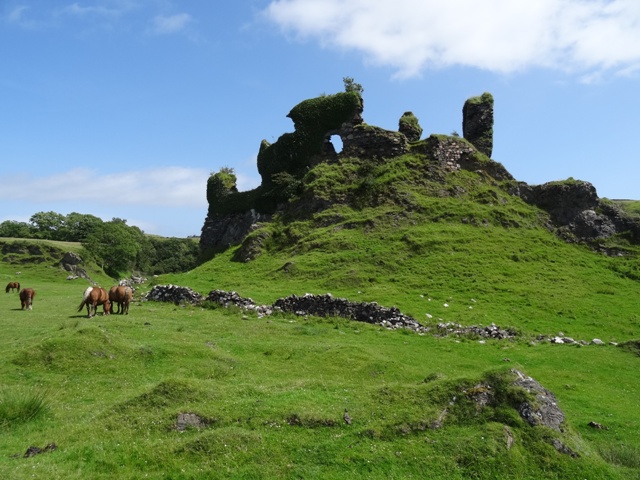 With a name like “Coeffin” you might well expect there to be some spooky stories and this castle doesn’t disappoint on that front. Whilst we have never experienced anything strange, we did have clients who reported of a strange experience. Whilst taking a photo, the silhouette of a figure appeared in the large window on the castles west facing wall. Thinking that it must just be another visitor that they hadn’t noticed before, they then took a second picture without anyone in the shot. When they later checked their pictures there wasn’t anyone in either picture.

The legend of the castle ghost tells of a young maiden, Beothail, who fell in love with a Viking warrior. He died in Norway leaving Beothail grief struck and yearning to be re-united with her lover. After dying from a broken heart, Beothail ghost returned to her father and brothers requesting that they carry her bones to be laid with her lover’s remains in Norway. Her bones were duly exhumed, washed in the holy well at St Moluags and carried to Norway, but one small bone was lost in the well, so the ghost of Beothail kept nagging away until finally they found the last bone and reunited all of Beothail with her Viking Warrior.

By this stage of our cycle tour we were really looking forward to some refreshments as it was a gloriously warm and sunny day and we had been working up a thirst with all the pedalling and hiking through fields. Fortunately, Lismore has an excellent visitor centre located almost halfway along the ~10 mile long B8045 road that runs like a spine down the island. The visitor centre has a small restored croft house with simple furnishings such as you might have found in a typical Lismore home in the late 19th century. 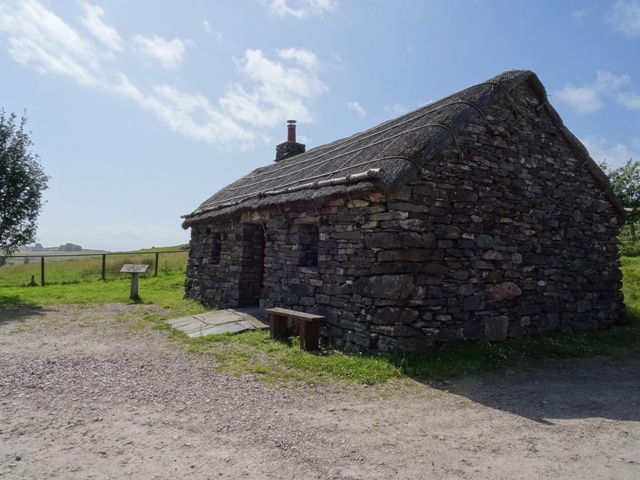 The centre also has an exhibition on the island’s history and culture, but by this stage we just wanted a drink and some ice-cream. It was maybe the early stages of heat exhaustion that made it taste so good, but we have to rate Freda’s homemade blackcurrant ice cream as one of the “foodie” highlights of our year so far. I’d even consider going to Lismore just to get some of this stuff as I’ve not yet seen it on the mainland. Whilst at the visitor centre, you can also stock up on some holiday presents as there is a good little gift shop with a nice choice of arty items on sale.

After our refreshment break, we had just enough time to nip down to the village of Achnacroish where the Calmac car ferry arrives from Oban. This was the furthest south that we dared to venture as our schedule required us to return on the 17:15 ferry and we had a 5 mile return cycle ride to complete in ~ 35 mins. If you aren’t rushing back to catch a ferry, you could stay in the lovely new bunkhouse at Achnacroish and get dinner at the fish & chip van near the pier. As it turned out, we arrived back at the ferry just in time to see it heading out to sea. Some frantic hand waving, shouting and flailing of limbs managed to persuade the relaxed and friendly ferry crew to turnaround and collect us. After all, we were all operating on “island time” and schedules are just there as a guideline rather than something you have to live your life by. 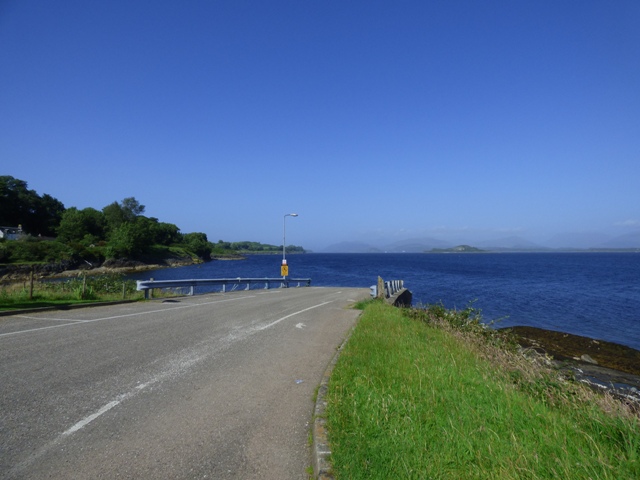