Last month we were touring in the Trossachs, an area which gets its fair share of visitors. This month, by way of contrast, we headed to South West Scotland, an area that is often overlooked when people are planning their tours.

When you think of the Scottish Highlands you probably have images of wilderness and lochs. While not as extreme as the , the Galloway Hills of South West Scotland can deliver much of the same sense of wilderness. There are even some corners that can rival the for scenic appeal. Of course, we would never claim that the South West of Scotland is more scenic than the Highlands, but there are different reasons for visiting this part of and an interesting history is one of them.

Mel Gibson’s film “Braveheart” created the illusion that hairy, blue painted Highlanders wearing plaid were the main opponents of the invading English army. In reality, the brunt of the Scottish Wars of Independence were fought by the Scots that lived in the south of the country and the South West was a real hotbed of Guerilla warfare. It’s no coincidence that both William Wallace and Robert the Bruce were from the South West.

Whilst Stirling was the location for the decisive battles of (September 1297) and (June 1314), it was the hills and towns of South West Scotland where Wallace and Bruce started their campaigns against the English invaders.

If you have seen the film “Braveheart”, you may have a rather confused understanding of Scottish history. There are incidents in the film that are based on fact, but they are often depicted in a manner that confuses the timeline and the reality of what actually happened.

Maybe you recall the scene where a very young William Wallace goes into a barn where the English had hung the Scots from the rafters? Well this is based on fact, but it happened in in 1297, when Wallace would have been 27 yrs old. The English summoned Scottish leaders to attend a “peaceful” meeting in the “Barns of Ayr”. When they arrived, the Scots were herded one at a time into the barn and then bound, gagged and slaughtered. Over three hundred Scots were killed in this incident, but the English didn’t get off lightly.

Wallace heard of the incident and immediately planned a reprisal. Under the cover of darkness, his followers entered the town of and trapped the English soldiers in the barns where they were garrisoned. The barns were then set on fire with the soldiers trapped inside. This event is also depicted in “Braveheart”, but the significance of the action is a bit lost in the film.

With such a colourful history, you would think that the Ayrshire Tourist Board would be making a much bigger thing about its “Braveheart” connections. However, there are no information boards about these events and there is no visitor centre to explain the history.

The town does have a “Barns Street” and a that commemorates the incident.  On a hill outside of Ayr, there is a which stands near the place where Wallace is said to have watched the flames of the burning barns. Folklore credits Wallace with commenting that “The Barns o’Ayr burn weel”. Sadly, both of the monuments are a bit neglected and not open to the public.

A much better place to visit if you want to connect with the history of the Scottish Wars of Independence, is Glen Trool. Located a few miles north east of Newton Stewart, Glen Trool is an attractive area of loch and woodland. It was also the site of a battle which marked a turning point in Robert the Bruce’s campaign to win ’s from Edward I of . 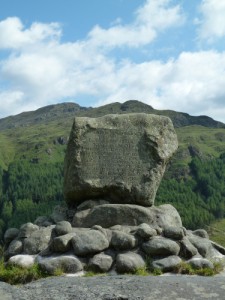 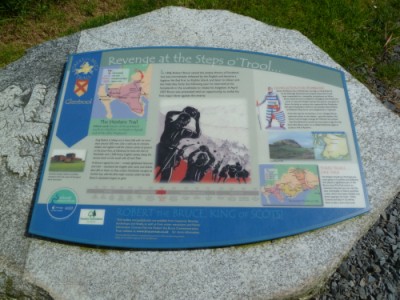 Prior to the Battle of Glen Trool (1307), Robert the Bruce was living the life of a fugitive hiding in caves in the Western Isles. It was this bleak period for Bruce that gave birth to the legend of him taking inspiration from the determination of a spider repeatedly attempting to spin a web. I digress…back to Glen Trool… Historians argue over the strategic importance of the incident relative to the final outcome of the Wars of Independence, but what the battle did prove was that Bruce could beat a larger English army and this gave him the credibility that he needed to rally an army of Scots to his cause. Unlike the historical sites in , the battle of Glen Trool is commemorated with an information board and a simple, but fitting memorial stone.

Glen Trool is also a great place for picnics and was absolutely scorching when we visited this July. Fortunately, we more or less had the place to ourselves… another benefit of visiting the South West of Scotland.

P.S. We also need to give a “Thumbs Up” to the new owners at the House o’Hill pub/restaurant at Bargrennan (near Glen Trool). Their cold beer and food was absolutely spot on and they’ve done a great job of renovating the pub.