Bear with me, but I'm going to start this blog with a bit of a rant. I was recently at a party when one of the other guests (a particularly stupid lady) voiced her opinion that Scottish people were too lazy to run good B&B's. Now I have no objection to people expressing their beliefs provided that they can support them with sound reasoning or evidence. However, this lady had neither to back up her views and the quality of Scottish owned B&Bs is something that we know quite a bit about. Unfortunately, I didn't feel that it was my place to start an argument at someone else's party so I let the comment go, but it got me thinking because my last tour of B&Bs in the Gairloch area would have firmly proved the lady resoundingly wrong!

My July trip to Gairloch was prompted by the launch of our new North Coast Flexi Tour which features Gairloch as a stopover location for day trips. Consequently, we needed to research new places to stay as some of our previous recommendations had closed. I visited 3 Scottish owned B&Bs in the area and you couldn't call any of the owners lazy. Indeed they were some of the most entrepeneurial B&B owners that I've met and everyone had a second job in addition to running their B&Bs. One of these B&B owners has come up with a particularly good scheme for supplying local restaurants with fresh produce by pooling and co-ordinating the vegetable & fruit growing efforts of local smallholders. It's a classic example of the whole being mightier than the sum of the parts and it's a great example of self-sufficiency in a small community.

It also has to be said that the hospitality we received from the B&Bs in Gairloch (and Applecross, thank you Janet!) was a shining example of the Best of Scotland and we came away feeling that we had made great friends. I make a special mention of Janet at Applecross because she kindly made me a delicious lunch of locally sourced smoked salmon and even more local bread. The bread comes from her sister who lives in a croft behind Janet's B&B and the sister bakes delicious bread in a large wood fired oven that occupies a corner of her garden.

So getting back to my rant, I hope you can now see why I don't think that the Scots are "too lazy" to run good B&B's. However, there are some parts of Scotland where you will struggle to find a Scottish owned B&B. As you might expect, lots of people want to retire to live in a place as beautiful and peaceful as the Scottish Highlands. Consequently, a lot of B&Bs are owned by people who have worked down south and then decided to escape the rat race by moving to the Highlands. And who can blame them when they wake up to a view like this!? 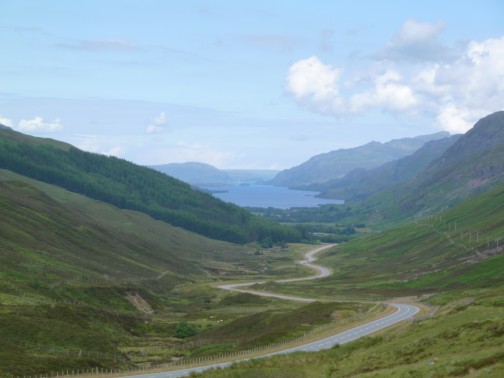