"The Kingdom of Fife"

April is one of my favourite months for touring in Scotland. The weather is usually bright and sunny, if prone to the occasional frosty day, and you get the first signs that Summer might be on its way. Another advantage of April is the fact that the tourist season hasn’t really kicked off so everything is a bit quieter.

This month we decided to have a short break in the “Kingdom of Fife” without any set schedule or plans to do business research… a proper bit of relaxation, most unlike us!

The majority of visitor’s who head to Fife are just making a beeline for the Golf Mecca of St Andrews. As a result, St Andrews in summertime has probably got a lower percentage of Scots per head of capita than any other town in Scotland. OK, I’m just guessing at that, but it seems highly probable when you factor in all the foreign students at the University and all the golf tourists. It does make for a very vibrant atmosphere and for a small town it does have a disproportionately high number of trendy cafes. 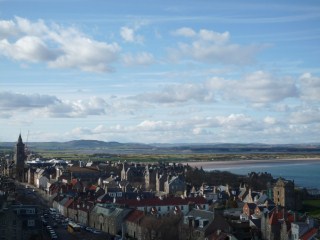 But to go to Fife and just see St Andrews is a pity, as this is a corner of Scotland with some of the prettiest villages. The only problem with some of the villages is the pronounciation of their names. Most of them are straightforward enough and you shouldn’t struggle to say them much different from a local, but others are designed to weed out interlopers. For example:

It’s almost as if they deliberately changed the spelling of place names. Maybe a cunning ploy that was started during the Napoleonic Wars to catch out French spies? Now that would be a good story if it was true!

Many of the villages have retained a picturesque quality that has been lost in other parts of Scotland where modern developments have “disrupted” the aesthetic harmony of older buildings. I’m not sure why this should be. Maybe the buildings were originally constructed to higher standards and have weathered the years better. It is certainly true that the East Neuk villages enjoyed some affluent periods when they were hubs of activity for trade between Scotland and the Low Countries. Indeed, the distinctive red tiles on the roofs of the older  Fife houses were originally imported into Fife as the ballast for ships which then departed carrying Scottish wool, linen, coal and fish.

My favourite village in this area is St Monans. It has a harbour front of brightly coloured houses that seem to jostle each other for a seaview. I also like the village because it doesn’t aim to be a tourist destination. By that, I mean that the place hasn’t been commercialised with gift / craft shops and cafes, although it does have a very good restaurant. 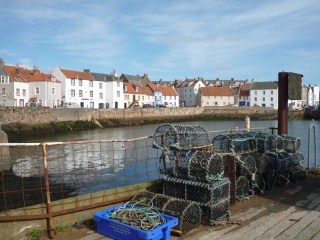 On this occasion we were staying in Lower Largo, just a few doors down from Robinson Crusoe’s house. No, I’m not making it up. The real Robinson Crusoe, Alexander Selkirk, on whom Defoe based his novel, was born and raised in Lower Largo. The true story of Selkirk is every bit as good as Defoe’s fiction. Unlike Robinson Crusoe, Selkirk actually opted to stay on his desert island because he realised that the ship he was aboard was not seaworthy. What Selkirk didn’t gamble on was how long it would be before another ship picked him up. In fact it was four years before he was eventually rescued, but it seems he adapted amazingly well to his island life. He even managed to domesticate some feral cats that he found on the island so he at least had some company. 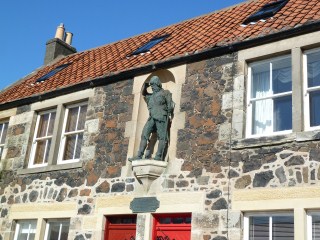 A better reason for visiting the Lower Largo area is to see the impressive Lundin Standing Stones. The great thing about these stones is the fact that they are so easily missed, yet so easily accessed. In fact we’re puzzled that these stones aren’t better known as you’d have to travel quite a long way to find any other standing stones that are quite as impressive. 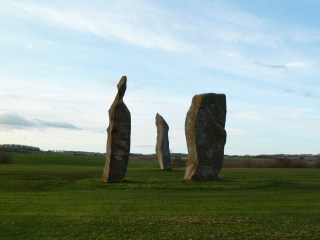