There is a pattern emerging here! I wrote the March travel diary in April and now I am writing the April diary on the 3rd June!!! At this rate of progress I'll be doing the December 2009 diary in October 2010. I really must try to get more disciplined.

Since the April diary is so overdue, I will keep it short and that might enable me to spend more time writing up all the places that we have been in May when we did a big tour and explored lots of new roads in Aberdeenshire.

As mentioned in the February diary, I did head down to Galloway for a full day of charting some new day trip options. Galloway is a lovely corner of Scotland that is largely ignored by the tourist trail so it is still possible to find quiet roads that have that same feeling of remoteness that you get in parts of the Highlands.

Much as I love Galloway and have visited it frequently, the peninsula of land ("the Machars") that lies between Luce Bay and Wigtown Bay has always been a place that I've tended to bypass. My experiences of working on conservation projects in this area left me with an impression of a landscape exposed to constant South-Westerly winds and rather functional looking villages. However, Whithorn, at the southern end of this peninsula, was once the hub of activity for travellers visiting the shrine of St Ninian for its healing powers.

Although now overshadowed by Iona as a religious centre, Whithorn was the site of the earliest Christian activity in Scotland. There are records of a Christian settlement in this area since the early 5th century, but hard archaeological evidence has not confirmed this. With all this history, we thought it high time that we try to create a historically themed day trip around the "Machars".

Lovely clear blue skies filled me with hope that I would get to see the villages of Wigtown and Whithorn  without the need to hold onto railings for fear of being blown away. However, my previous experiences  of the "Machars" were repeated and I was greeted by a  bracing wind. In actual fact the wind enhances the rugged coastal appeal of this area and I took some dramatic pictures of waves breaking on the shore beside the little ruined chapel at the "Isle of Whithorn". It makes you wonder what risks the pilgrims must have taken when trying to come ashore  at this rocky inlet. I bet a good few prayers of thanks were given in the little chapel after some scary arrivals. 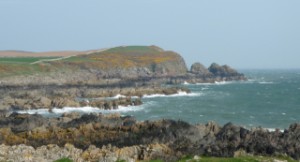 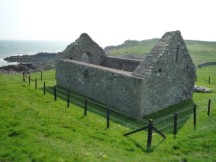 Continuing the religious theme, after my tour of the Machars, I paid a visit to the lovely 12th century Glenluce Abbey in its tranquil setting besdide the Water of Luce. To my mind, Glenluce Abbey has a similar "feel" to Dryburgh Abbey. The ruins that remain don't give you a lot of an impression about what the complete building was like, but the location has a lingering sense of peace and tranquility.

One section of the abbey that has been kept intact is the Chapter House which has some glorious acoustics. Elgin Cathedral has a much larger and intact chapter house, but it doesn't seem to develop quite such a good echo effect. I couldn't resist belting out a few lines of "King of the Road". I'm sure you'd love to of heard this, but you will need to make do with this You Tube clip that I made of me testing the acoustics.

P.S. I thought I'd add in these pictures of a herd of Jersey Cows that were "sun bathing" in a field beside the abbey. I nearly brought one home as a pet! 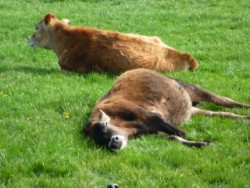 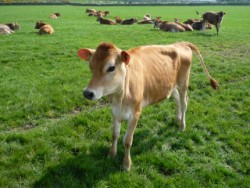