"Taking it Easy on Easdale"

This month, I’m completing our Lorn Islands “Odyssey” with the tiny Island of Easdale which is located just off the Isle of Seil about 11 miles south west of Oban. Easdale is one of the smallest, if not THE smallest, of Scottish Islands to be served by a regular ferry. When I say “ferry”, it maybe suggests a vessel that is rather larger than the open dinghy with outboard motor that sprints back and forth from Ellenabeich to Easdale. 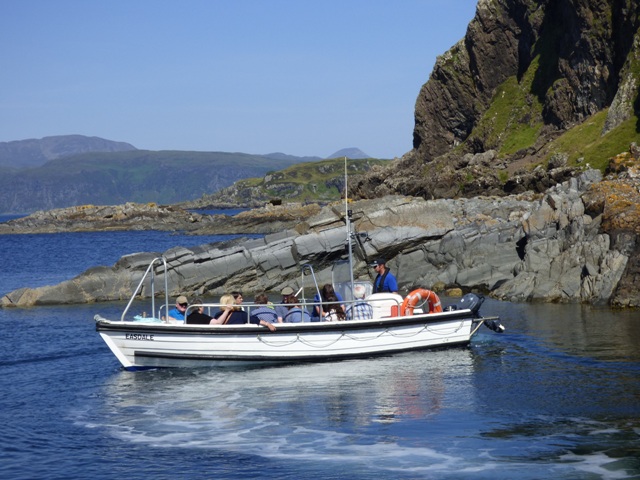 There’s not really a timetable for the ferry, instead there’s a little hut on the pier at Ellenabeich where you find a couple of switches and some instructions on which switch to press to call the ferry depending on whether it’s night or day. In truth, I don’t think either switch works anymore so you either wait patiently for the ferry to arrive, or you jump up and down waving your arms and hope to get someone’s attention across the water. 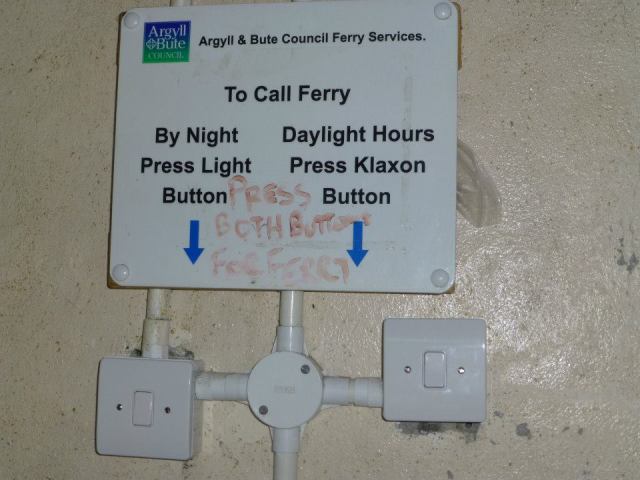 A swift 5 minutes later and you jump off the ferry, literally, in Easdale. There’s no charge to sail to Easdale, but you pay on the return journey. Actually, I didn’t pay anything at all as the ferryman spotted my “Secret Scotland” logo on my jacket and waived my payment with a knowing nod. Nice guy. 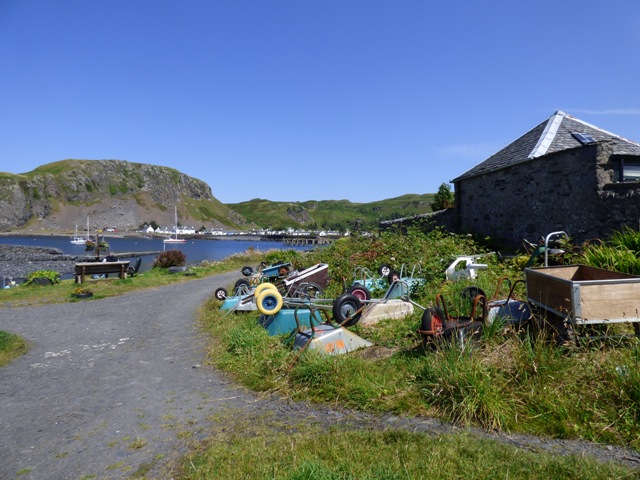 The first unusual thing that catches your eye on Easdale is the eclectic mix of upturned wheel barrows next to the pier. It looks like a place where wheel barrows come to die, but they are there for a good reason. Easdale is only 10 hectacres in size which means there’s no need for cars on this island, but a wheel barrow is an essential transportation tool. After all, no two places on Easdale are much more than 30 minutes apart, well maybe a little more if pushing a wheel barrow.

The next thing that might surprise you on such a small island is how good the facilities are.

Just beside the pier there is a distinctive modern community hall that has a pyramid shaped roof and glass walls held in place by large wooden beams that lean out from the building at quirky angles to give the building an irregular, almost “organic” shape. It’s a bold piece of architecture, but actually sits comfortably alongside the neat rows of traditional white washed cottages. The community hall is a great little venue and it hosts all sorts of events from ceilidh nights through to some well known music acts (e.g. The Waterboys, Peatbog Faeries). It’s well worth checking out their calendar to see what’s on. 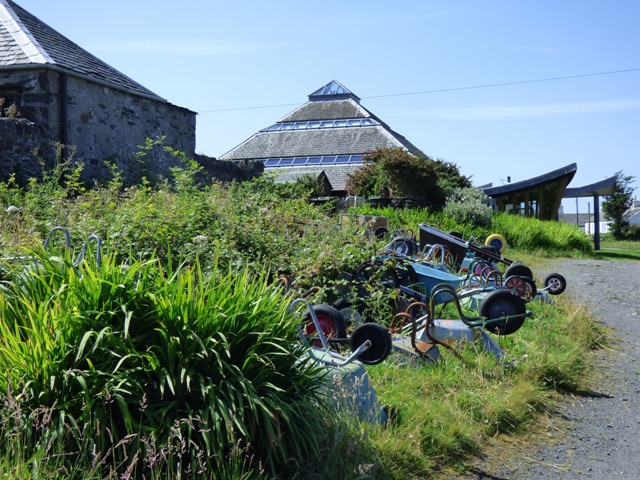 Just beyond the community centre is the Puffer Bar & Restaurant where you can get a very nice meal. As you might expect, the menu does feature quite a bit of seafood and we’ve dined on lobster during previous visits to the Puffer. At the back of the “Puffer” is a cozy little bar with a counter shaped like the stern of the old puffer boats that used to be such an important part of life in these island communities when everything moved by sea. 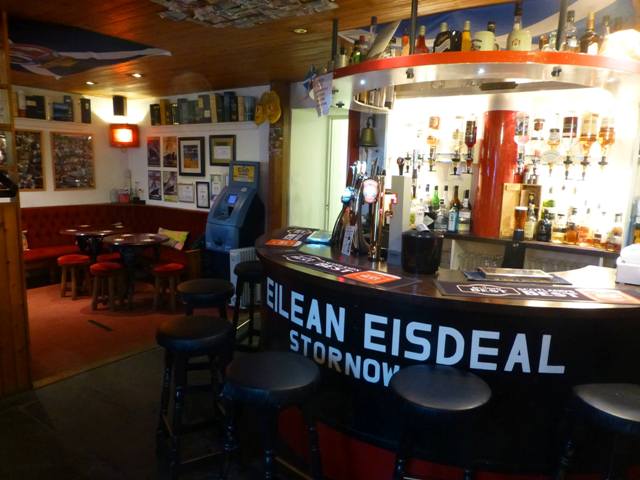 Easdale’s diminutive size, enables it to claim the title of the most densely populated island in Scotland with a permanent population of just 59. Having 50 plus residents is quite an achievement for any small Scottish island these days, but it pales into insignificance when compared to the island’s peak population of 500 back in the mid 1800’s. At that time the island was the hub of a slate mining industry that supplied a global market for roof tiles.

The slate mining industry has left a very visible legacy on Easdale, but the flooded remains of the large slate quarries are not ugly in the way that open cast mines can so often be. Instead, they are more of a curiosity and on really hot days (during our last visit the car was telling us it hit 30C) the old quarry pools become enticing “lagoons” for a swim. 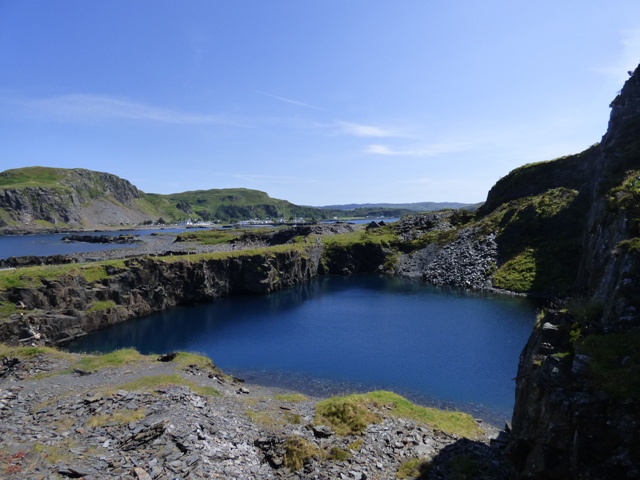 In its heyday, the slate industry at Easdale must have been quite a sight with 9 million slates being produced in 1869. It would also have been quite a daunting work environment as the quarries were dug some 300 feet below sea level. All that kept the sea water out were water pumps and the outer rock “walls” of the quarries. If I was working in a mine that deep, I’d demand to see the calculations that were done to ensure that the rock face was strong enough to hold back the wall of water on the other side.

Ultimately, it was the forces of nature that led to the end of this industry on Easdale. In 1881 there was a freak storm that caused waves large enough breach the sea walls of the quarries. However, slate production did continue right up to the start of World War 1. There is a small museum (admission ~£3) that tells the whole story in far more detail. 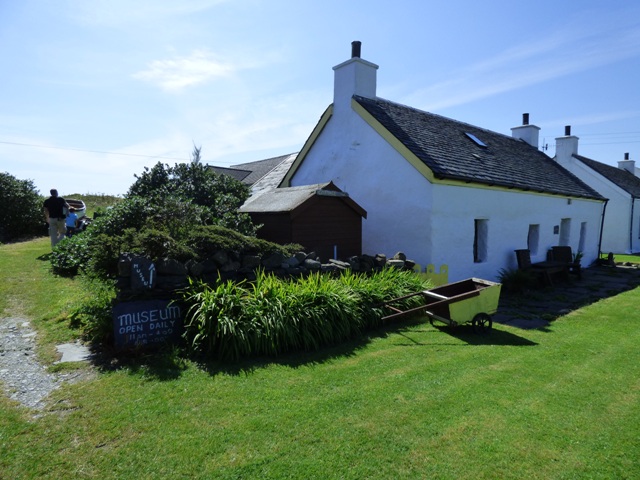 The quarries still provide a modest income for Easdale. The locals have ingeniously exploited the island’s 2 most abundant assets, big ponds of still water and lots of smooth flat stones, to create a new event on the international sporting calendar. Yes, Easdale is home to the World Stone Skimming Championships. This has become a very popular event usually held on the 3rd weekend of September with an accompanying party the night before. Entry is open to all (for a modest adult entry fee of £5), but it is a popular competition and there are only 350 entry places allocated on a first come first served basis. We haven’t entered it yet, but we do like to get some practice in whenever we go. 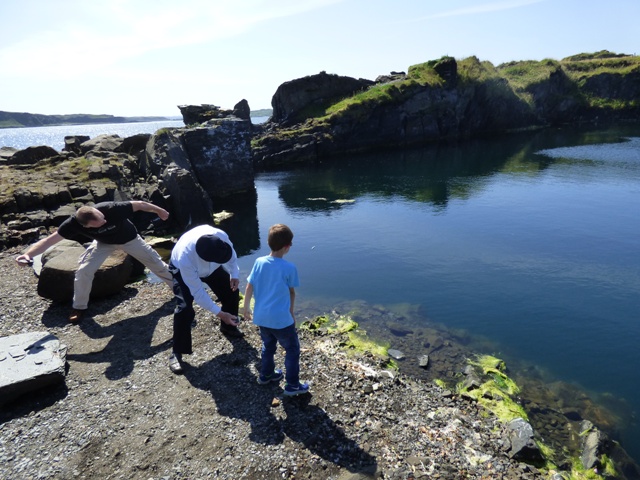 If you are a photographer then we would certainly rate Easdale as worthy of a visit. The neat rows of the old slate workers cottages, the contrast of lush green grass and dark grey slate and the rusting remains of old slate mining machinery give you lots of photogenic options around every corner. Also, with no cars to worry about, Easdale is a great place for children and dogs to be let off the leash. The absence of cars means there is no need for roads or pavements, so neatly trimmed grass is all that fills the open areas between the rows of cottages. This invites you to kick off your shoes and walk around barefoot, and that pretty much sums up the appeal of Easdale. It’s a place that puts you in the mood to kick off your shoes and enjoy the simpler pleasures of life. 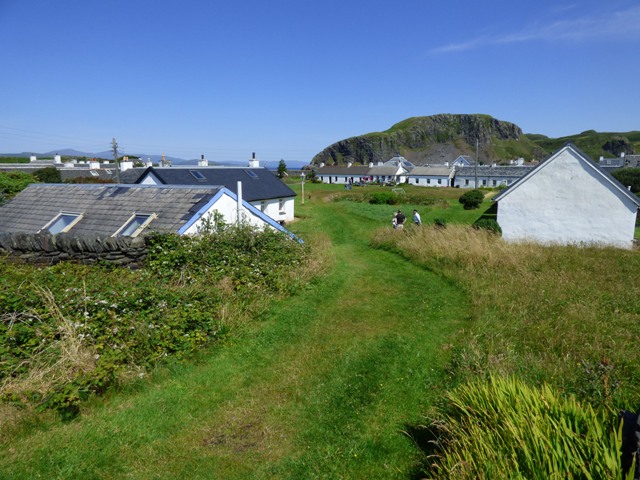