This October, after a very frustrating and hectic year, we decided we needed a few days away in a quiet part of Scotland where we could just unwind and enjoy the simpler things in life. We are great fans of the area around Tarbert on Loch Fyne, but we go there quite often so we chose to explore a bit further south into Kintyre. Of course, most people have heard of this area thanks to Paul McCartney’s song “Mull of Kintyre”, but not many people go there as it does seem strangely remote. Coincidentally, we stayed very near to Saddell Bay where they filmed the video for "Mull of Kintyre".

This is the perfect destination if you are seeking a place in Scotland where you can really escape the crowds and relax into a slower pace of life. Paul McCartney must have been one of the world's most famous persons when he chose to buy High Park Farm here in 1968 and I'm sure it was the sense of going "off-grid" that made him love the place so much that he felt moved to eulogize it in song.

The local tourist board markets Kintyre as “The Mainland Island” and this is not just fanciful PR speak. Kintyre really does have that sense of isolation and self containment that you find on an island, but the slogan has a more interesting origin in historical events.

Back in the 11th century, much of Scotland was claimed as territory by Norse invaders. One particular Viking Prince, “Magnus Barelegs” (honest we aren’t making this up!), made an agreement with Scotland’s King Malcolm whereby he was allowed to lay claim to any land that he could navigate around by boat. Magnus interpreted the wording of this deal quite literally and in 1093 he had his longboat dragged across land from West Loch Tarbert to Loch Fyne. He then claimed that this was navigation by boat and that all of Kintyre was therefore his. The moral of story being to be very careful about the wording of any contract you sign up to.

Heading south from Tarbert, we opted to drive down the east coast of Kintyre on the B842. This side of the peninsula is an area with sheltered bays, attractive wooded glens, and magnificent views across the Kilbrannan Sound to the mountains of  Arran. It is a classically Scottish landscape, but we do have to warn you that the B842 is quite a roller coaster of a road with some incredibly steep and twisting climbs as it navigates its ways through the various glens that cut inland from the Kilbrannan Sound. 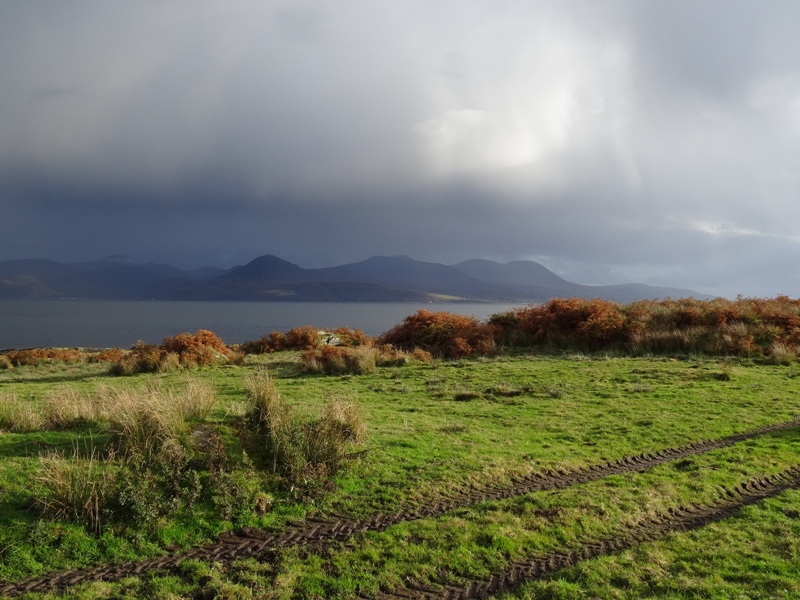 The tranquility of Kintyre isn't just enjoyed by humans. It is a great place for spotting wildlife and the animal kingdom seems to co-exist happily with humans. For example, the harbour at Carradale is home to both an active little fishing fleet and some resident seals. It is not uncommon to see the seals swimming around the harbour in the hope of getting a free meal from one of the fishermen. 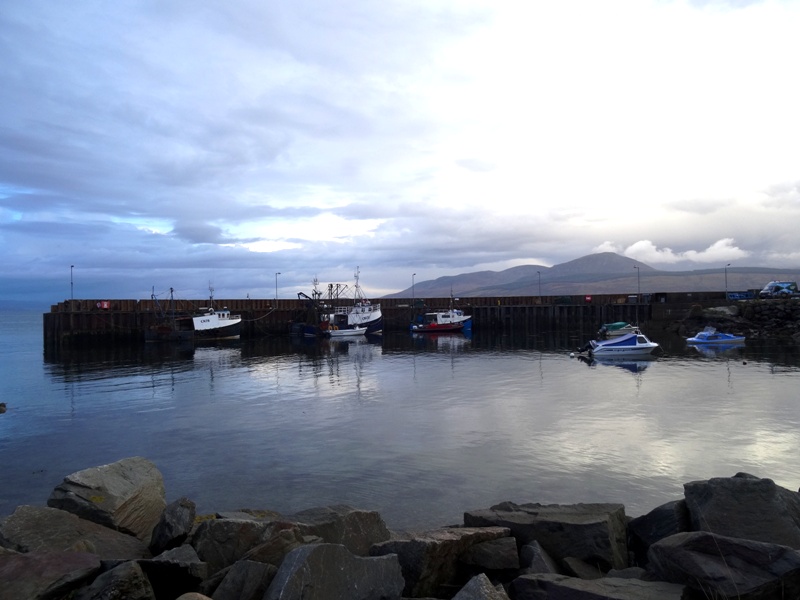 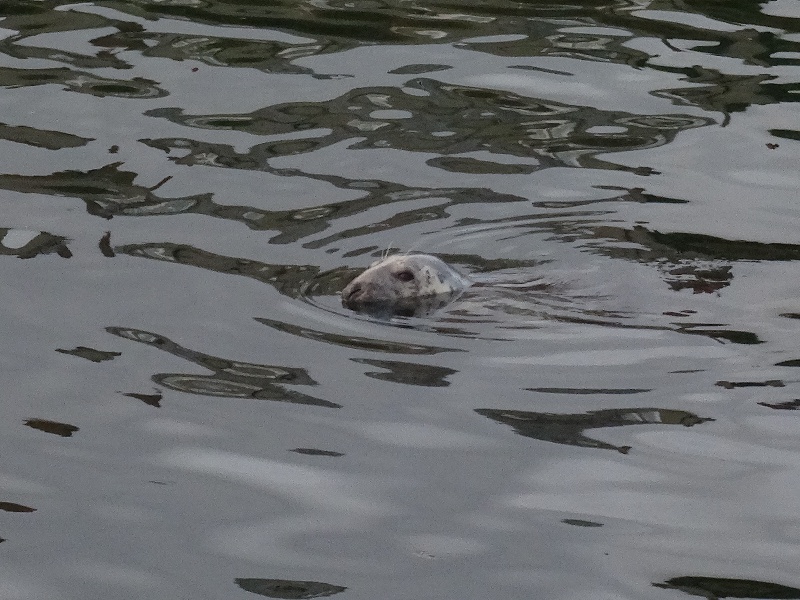 We have also been very lucky and spotted otters diving for molluscs just a few metres from the pier at Claonaig where the small ferry to Arran departs. In all our travels we've never come across a wild otter as relaxed about its proximity to humans as this one.

As one of the closest landfalls to Ireland, the Mull of Kintyre and surrounding seas became an important highway for trade and early Christian missionaries. When you think of St Columba, you tend to think of Iona, but at Southend there are the ruins of a chapel with links to St Columba. There is also a carved footprint in a stone near the spot where he is said to have knelt down to pray after his safe arrival in Scotland from Ireland in 563 AD. 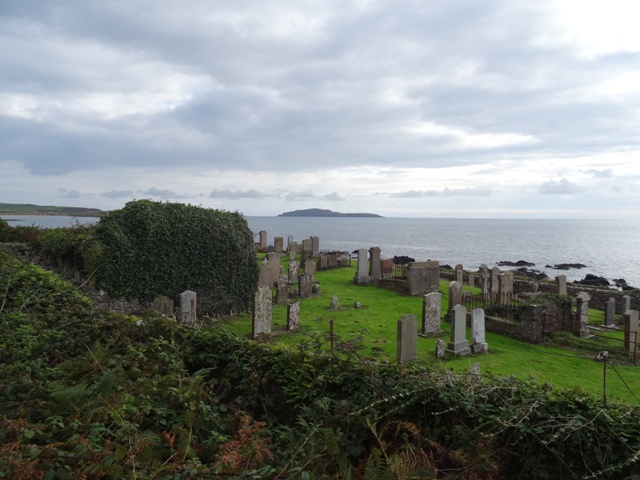 We suspect that the truth is somewhat different and the story of it being related to St Columba has more to do with stimulating a medieval tourist trade from pilgrims who could also take a drink of spring water from the nearby "St Columba's Well". It is certainly true that the second footprint was added in the Victorian period by a local stonemason. However, none of this can detract from the real history of the nearby 13th century chapel which was dedicated to St Columba. 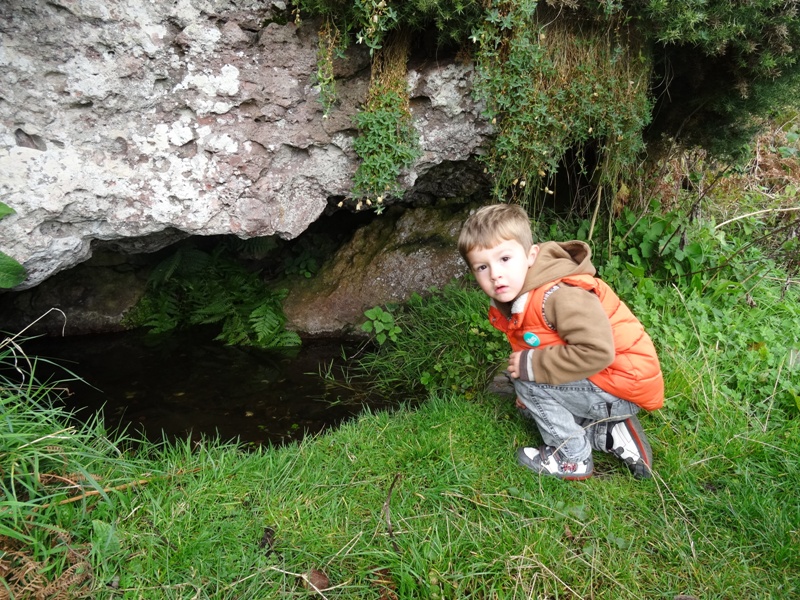 The other notable religious site in this area is a Cistercian Abbey at Saddell on the east coast of Kintyre. Very little remains of the abbey to give any real sense of the building, but even in its heyday it would not have been a large settlement. What makes the place notable today is the collection of medieval grave slabs that display fine carving of the type known as the “Kintyre School”.

The slabs are displayed in a bold modern shelter that doesn’t clash too much with its serene surroundings. But Cistercian monks always did have a knack of picking locations with a special atmosphere. Indeed, a common feature of the locations of their abbeys is remoteness from main centres of population, fresh running water supply, and good fertile farmland in sheltered settings. Saddell ticks all those boxes. 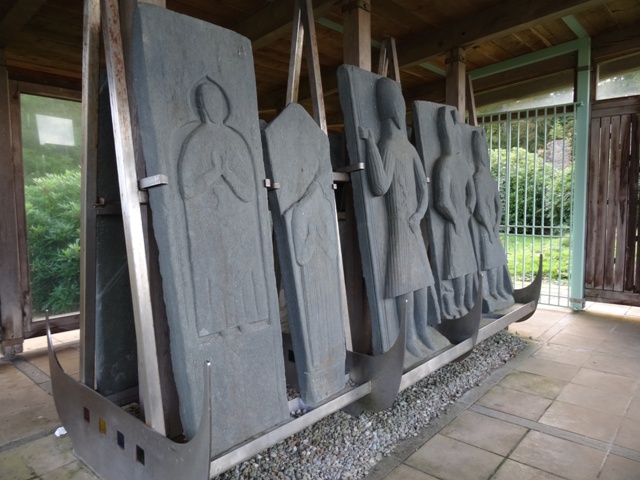 If Saddell is too quiet for you, then you’ll need to head to the bright lights of Campbeltown. Anyone who knows their malt whisky will have heard of this town. Dufftown in Speyside is the place you tend to think of when people ask about the whisky capital of Scotland, but Campbeltown probably had the highest concentration of distilleries per square mile of any place in Scotland.

During the early 1800’s there were around 25 distilleries actively producing in this small town. Only 3 distilleries remain, Springbank, Glen Scotia, and the new kid on the block, Glengyle. These aren’t the most photogenic of distilleries as they are tucked away on back streets and surrounded by other buildings, but Springbank is one of the best Scottish Malts you can get. Well, in our opinion anyway! 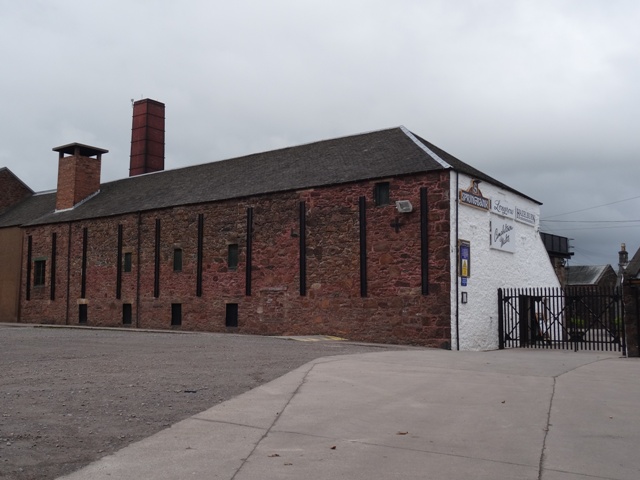 Campbeltown also has a busy harbour full of fishing boats, but the current fishing fleet is just a shadow of the 19th century herring fishing fleet which numbered around 300 boats. Indeed it is hard to reconcile the sleepy atmosphere of modern Campbeltown with the hive of industry that existed here in the late 1800’s / early 1900’s. In those days the town had an active shipbuilding industry, it was a busy port for the “puffer” boats on routes to Ireland and the Islands, it had a small coal mining operation at nearby Machrihanish and there was even a small train service that ran from Campbeltown to Machrihanish. Today, Campbeltown greets the visitor with an attractive seafront, but the streets and shopfronts behind the seafront would benefit from more tourist trade. 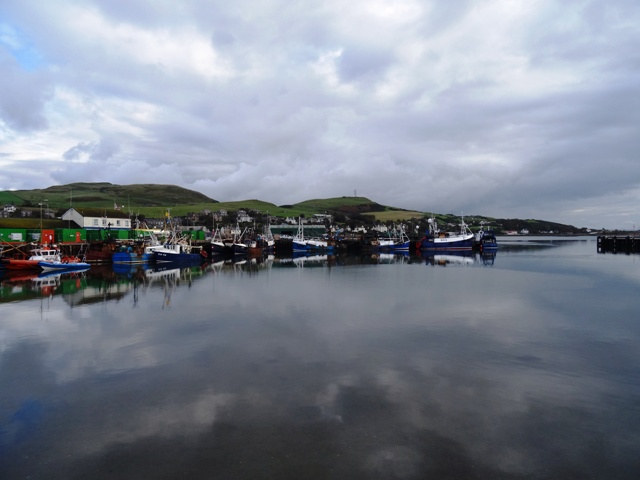 From Campbeltown, it is just a short drive to get to the west coast of Kintyre. On this side of the peninsula the scenery and views are quite different because you are exposed to the North Atlantic weather systems that come rolling in from the sea (Did you see what I did there? .... credit to Paul McC for that one). 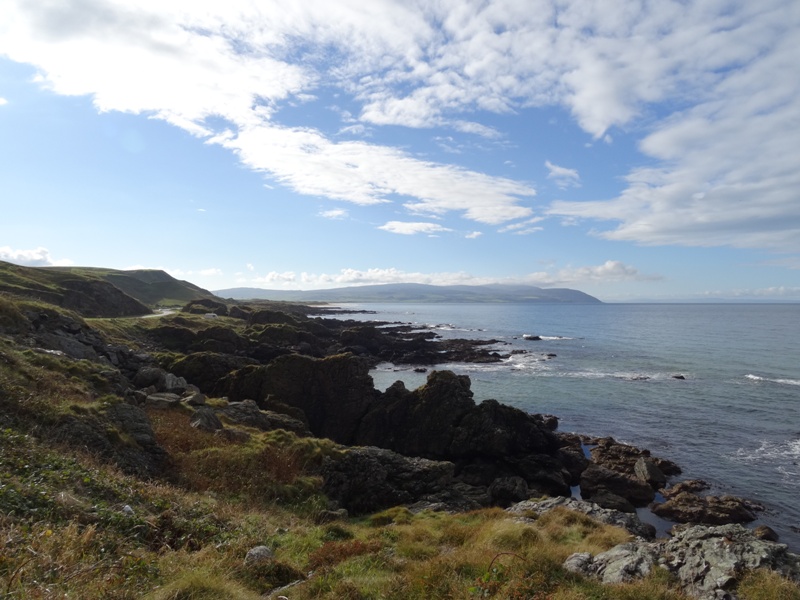 One of the great attractions of the west coast is the wonderful Links golf course at Machrihanish Bay. This golf course is winning global recognition and an American company, realising its star qualities, has recently bought and refurbished the Ugadale Hotel (pronounced “You-ga-dale”) beside the course. If you are a golfer, or a painter, we’d recommend a visit to this part of Scotland to take in the scenery, bracing Atlantic sea air and the magnificent clean sands of Machrihanish beach. 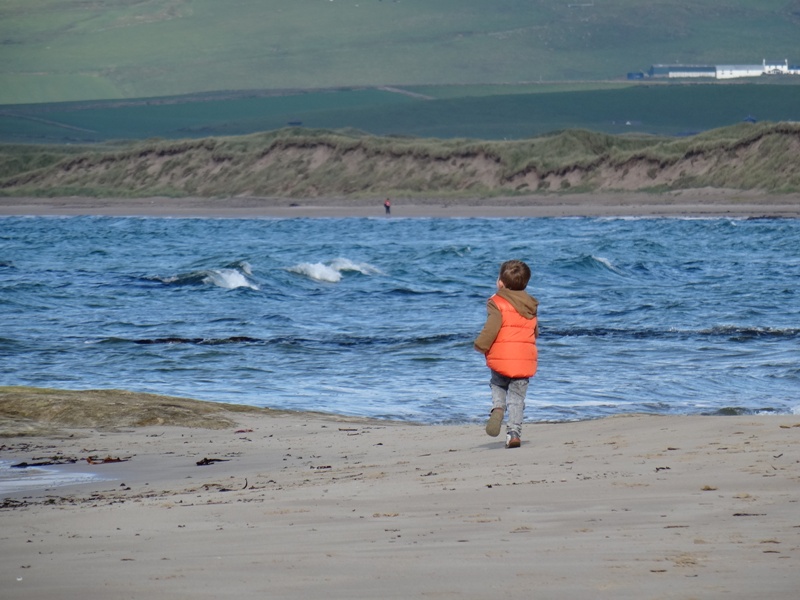 Interestingly, about a half mile west of Ugadale Hotel is the site where a radio mast was erected in 1906 for the purpose of transatlantic communications. The site was chosen as it offered the least obstructed route across the Atlantic between Scotland and another radio mast at Brant Rock in Massachusetts. In November 1906, radio operators here were the first to be able to listen in to a radio conversation transmitted from America. The mast has long since fallen down thanks to the battering of Atlantic storms, but, if you are interested; you can still find the concrete foundations where it stood. 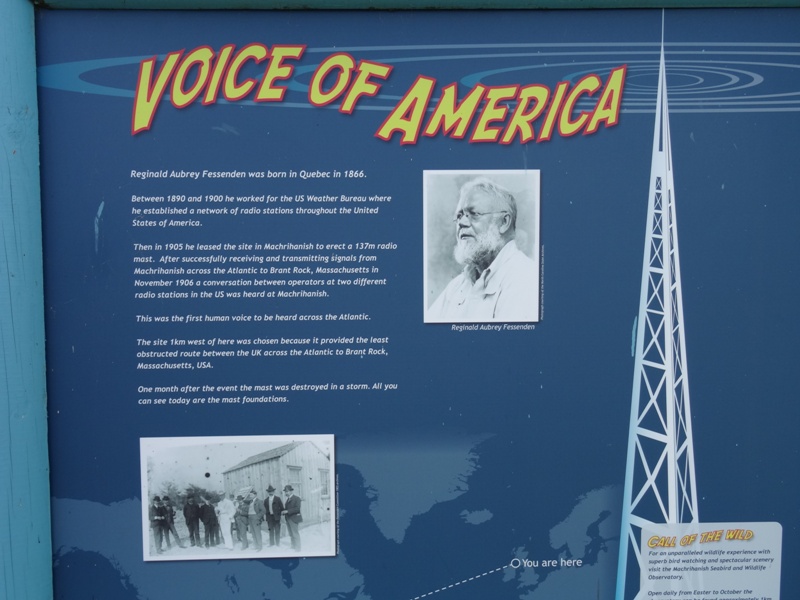 Visit Scotland could do a lot more to promote this area of Scotland which seems to suffer from the perception of it being at “the end of a road" to nowhere. What tourists don't realise is that this is one of the most unspoiled areas of Scotland, blessed with fantastic beaches, a rich history, and a wonderful natural larder.

Getting to Kintyre is easier than you might think.

If driving, you can travel from Glasgow airport to Campbeltown in around 3 hours and it is a driving route that rivals the North Coast 500 for scenery.  This route is detailed in our Argyll Coastal Trail tour itinerary,

Should you prefer to let someone else do the driving, there is the Citylink bus service (number 926)that runs from Glasgow to Campbeltown, but this takes 4 hours and you'll really want to have a car so you can explore all the sights of Kintyre. 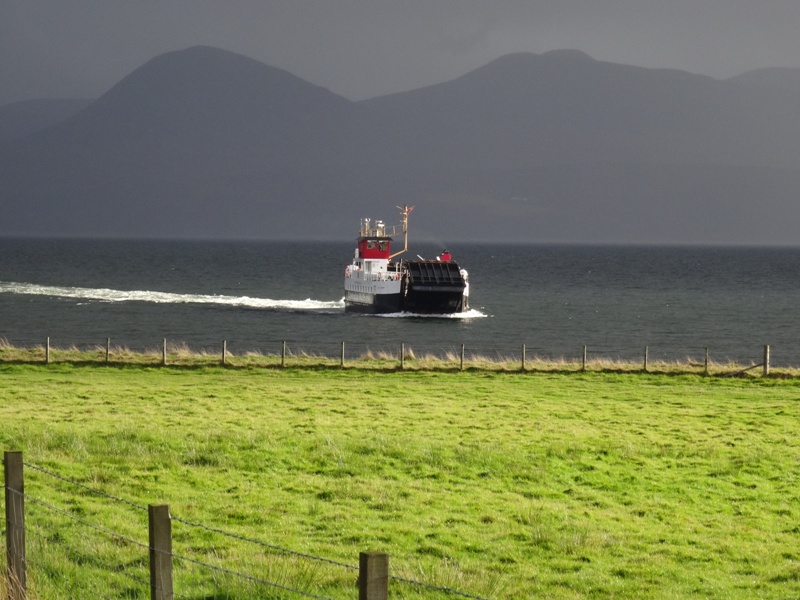 Another option that has started in recent years, is the Calmac Ferry service that runs from Ardrossan to Campbeltown. This is a great way to leapfrog from the central belt of Scotland with a scenic and relaxing sea voyage past the Isle of Arran. Alternatively, you could combine a visit to Kintyre with some Scottish Island Hopping and this is covered in our Island Explorer itinerary which also visits Arran and Mull.

Go on, be daring, and try something different. 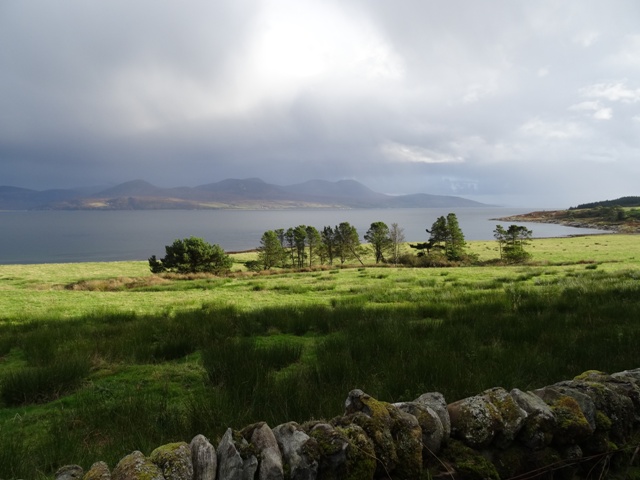