Once again the Blog entries have skipped a whole month, but we have a very good excuse this time. We are currently upgrading the website, a process that always seems to take 3 times longer than expected. Consequently, we have been trying to avoid making changes to the current website in case we forget to transfer them into the new website. The more changes we make, the more confusing it gets for our web developer.

However, the Blog couldn't remain silent any longer as we have been out touring and have got some good stuff to talk about!

The main theme of October was archaeology and we spent 4 days touring around Aberdeenshire where there is a great cluster of standing stones, burial chambers and interesting sites ranging from 2500 B.C. through to the Picts.

In fact, the archaeological sites are so prolific that many of them have no signposts. This makes it great territory for a Secret Scotland itinerary as you simply would never be able to find some of the places unless someone told you which farm entrance to look out for.

You might be quite surprised at how blase the locals are about the ancient history that surrounds them. There are stone circles next to quarries, literally backing onto farm sheds and, in one case, in the middle of a graveyard.

If I had to pick a favourite, it would be the stone circle at Midmar, the one in the graveyard. If you have ever seen the original 1973 film "The Wicker Man", then you'll immediately get a sense of Deja Vu when you see the standing stones surrounded by gravestones. There is something intriguing and slightly spooky about the continuity of this site as a place of religion that dates from pre-historic Pagan rituals to modern Christianity. 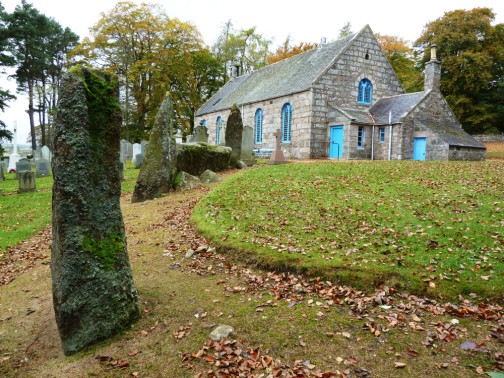 An even spookier experience for me was the souterrain at Culsh. A souterrain is an underground stone lined passageway which is believed to have been used for food storage. The passageway is about 40 feet long, but not much more than 3 foot in height and width. 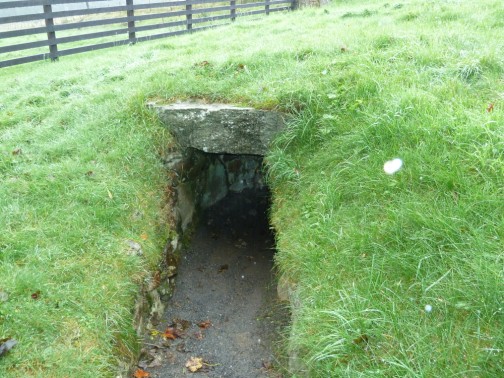 You really need a torch, a reliable torch, if you are going to explore this rather cramped and claustrophobic tunnel. I had a torch, I didn't have a reliable torch. About halfway along the tunnel the light packed in and I was plunged into pitch black darkness. My only lightsource was the flash from the camera and there was no way to turn around inside the tunnel to try to see the entrance. I edged my way back out of the darkness, but if something had touched my face I would probably have died on the spot of a heart attack. The Chilean miners have my utmost sympathy and respect!

On a very different subject, our October travels took us over the Tomintoul to Cock Bridge pass that crosses the Cairngorms from Speyside to Royal Deeside. This is an area with several large hunting estates (hence the fact that the Royal Family holiday here every August / September). So when driving this road, you should keep an eye scanning the heather as it is place where you can often spot Grouse.

October is slap in the middle of the Grouse shooting season which runs from August 12th ("The Glorious Twelth" - but not if you're a Grouse) to December 10th. With this in mind, you'd think that all the Grouse would have their heads down and would be making  the best use of their excellent camouflage, but you can still find them once you get your eye tuned into their shape.

I was really pleased with myself when I spotted these two just 50 feet from the road. Now some people might think that they are stupid birds for letting me approach as close as I did, but I prefer to think that they are actually quite smart and realised that someone wearing jeans and a Secret Scotland logo on his sweatshirt was not a threat. I bet they would have been hiding a lot better if I had been wearing Tweed and talking with a posh English accent.

P.S. Don't worry, I wasn't chasing them off their nest. The hatching season has already passed.