"Secret of the Stones"

I’m one of those old fashioned people that doesn’t use Sat-Nav when I go travelling. I prefer to find my way from A to B in the old fashioned way using a road atlas because a map is a wonderful way of discovering back road routes. Maps are for explorers and free spirits, where as a Sat-Nav is for people who like to be told what to do.

For example, the other day I was travelling to Aberdeen. Now if I was to listen to the Sat-Nav lady I would have sat on the boring A90 all the way from Perth to Aberdeen looking at the back of a truck and worrying if I was keeping to the speed limit. For sure, I would have arrived at my destination earlier, but I’m a firm believer that the voyage is as important as the destination. Had I stayed on the A90 I would have missed out on exploring the lovely little village of Aberlemno and its curious Pictish Stones.

Aberlemno appears to have been a place with some special significance for the Picts as it was the site of at least 7 large and intricately carved stones. Unfortunately, as with so much of the history of the Picts, the purpose of the stones and the reason for the cluster at Aberlemno has been lost with time. It has been speculated that it was a religious site as it is located approximately midway between the early Christian centre of Brechin and the town of Forfar where it is though the Pictish royalty may have been based. 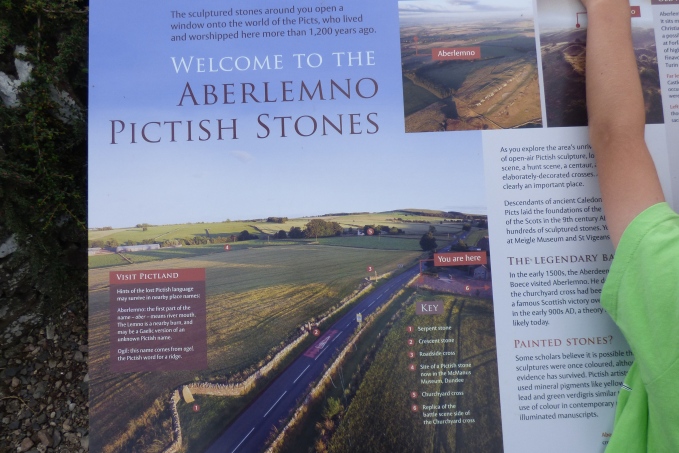 The name of the village doesn’t give us any clues either. “Aber” is simply the Gaelic for mouth of a river, and “Lemno” is the name of a nearby stream. Perhaps “Lemno” had some meaning in the language of the Picts, but we can only guess.

So what do we know about the Pictish Stones of Aberlemno?

Well we can tell you that they date from 1,200 years ago. The stones appear to have different themes and have been named according to their theme or location. So we have the “Serpent” stone, “Crescent” stone, Roadside Cross, Churchyard Cross.

The Serpent, Crescent and Roadside Cross stand right beside the B9134 so it can be quite an eerie experience to drive this way on a foggy night with the stones looming out of the mist like ghostly figures. Fortunately, we visited on a day with clear skies and warm sunshine and the only thing threatening us were the occasional cars travelling between Forfar and Brechin. 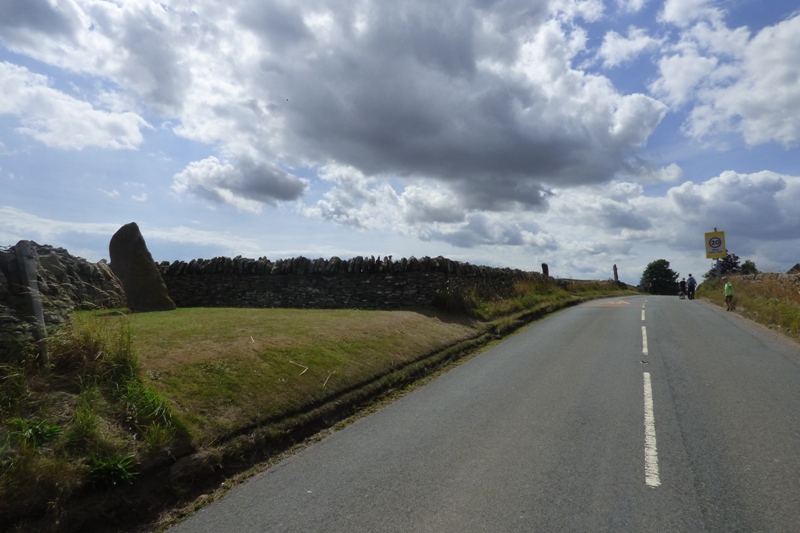 The “Serpent” stone takes its name from the clearly visible snake that is carved near the top of the stone. The snake is a recurring symbol on Pictish stones and it may have been used as a symbol in their alphabet, or maybe it simply denoted something like a coat of arms. It has been speculated that the stones would also have been painted, but any traces of pigment in the stones has long since weathered away. 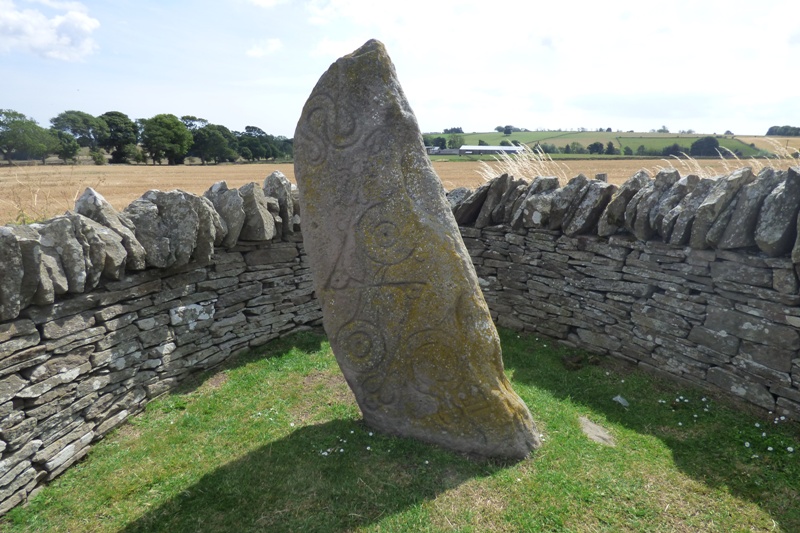 The carvings on the “Crescent” stone have suffered from exposure to the elements and it is the least impressive stone here. You really have to look carefully to identify the faint curved shapes that are thought to represent crescent shaped moons. 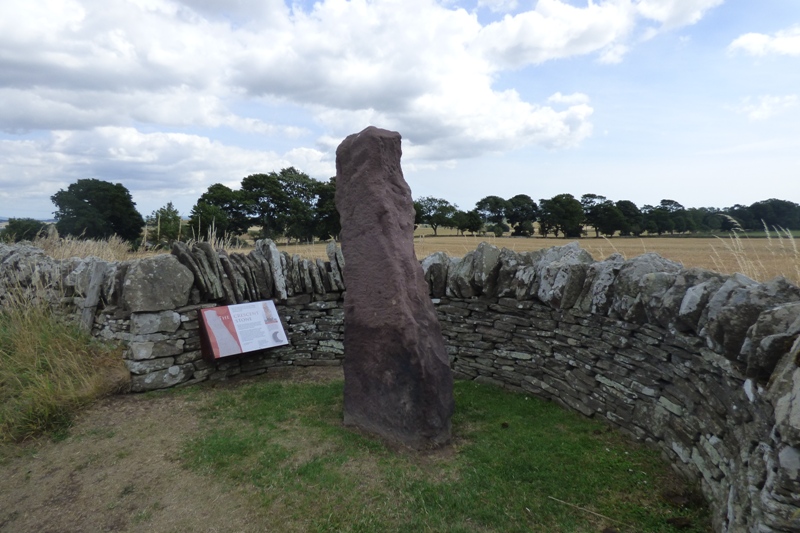 The Roadside “cross” is the most intricately carved of the stones on the verges of the B9134 and its references to Christian scriptures enables archaeologists to interpret the symbols with more confidence. For example, one side of the stone has a scene that appears to depict David protecting his sheep from attack by a lion. 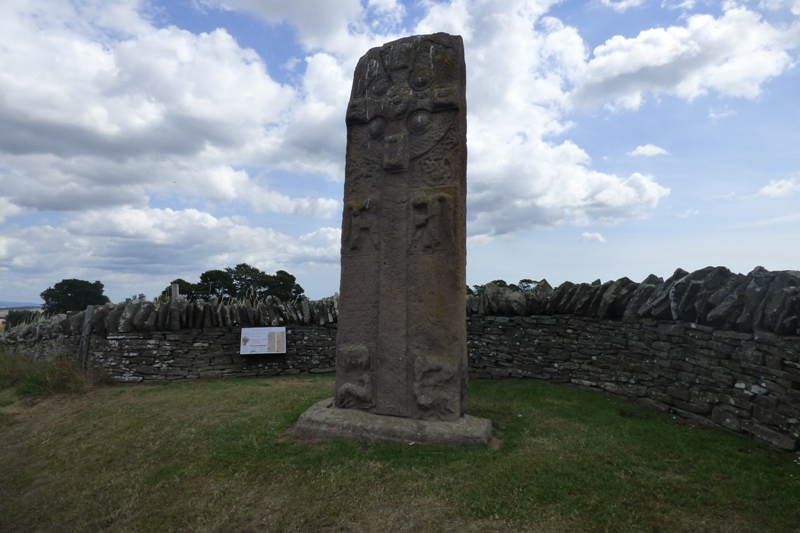 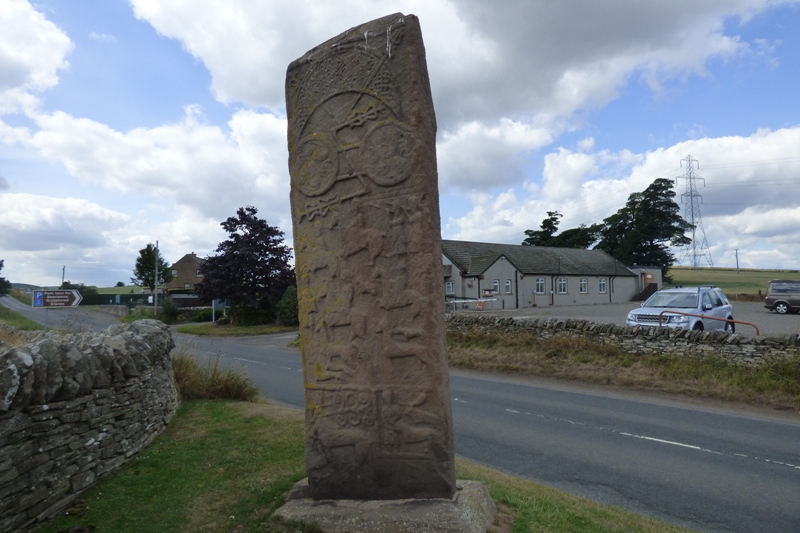 The most impressive of the stones is the “Churchyard Cross” found in the graveyard of nearby Aberlemno Kirk. There is also a life size copy of this stone in the car park at Aberlemno village hall. The copy depicts the carvings as they might have looked when newly done so you can appreciate the details without 1200 years of erosion. 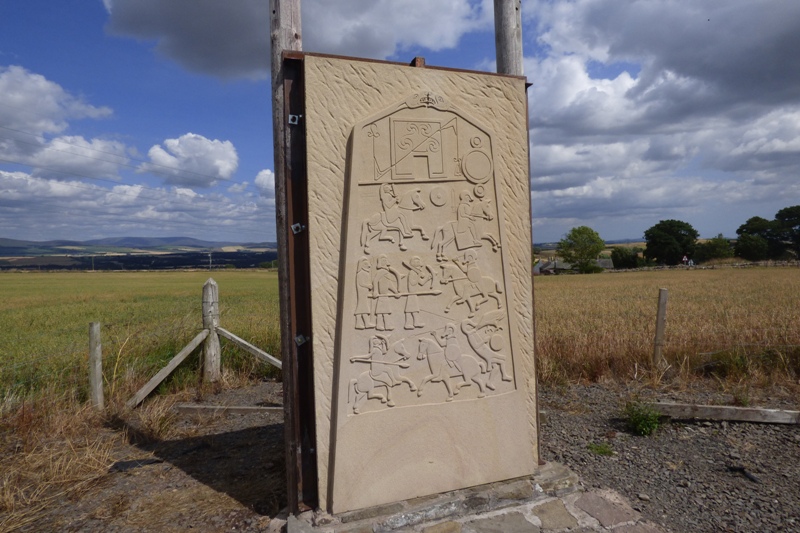 This stone wasn’t always situated beside the church and is thought to have been dragged here at a later date. A hole drilled through the stone might have been used for attaching a rope to pull the stone to its current location, but, as with so many other aspects of these stones, this is purely speculation. 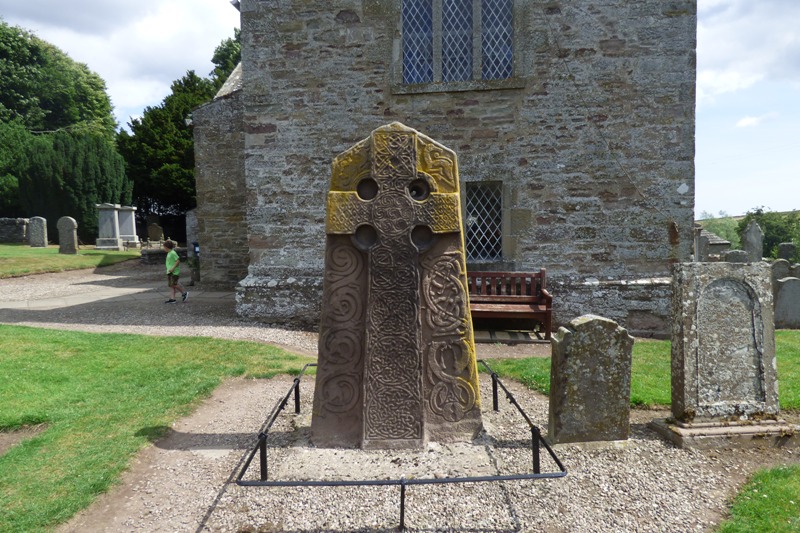 Like the much larger Sueno’s stone in Forres, the Churchyard Cross depicts scenes from a major battle. The victory commemorated on the stone could be that of Picts over Northumbrian invaders during the battle of Dun Nechtain in 685 AD. The argument supporting this is that the village of Dunnichen (which sounds similar) lies ~5 miles to the south. Whether this is correct or not doesn’t really matter as the marvel of this stone is the artistry and craftsmanship of the people that created it. The Picts were clearly an advanced and civilised culture capable of tremendous works of art. 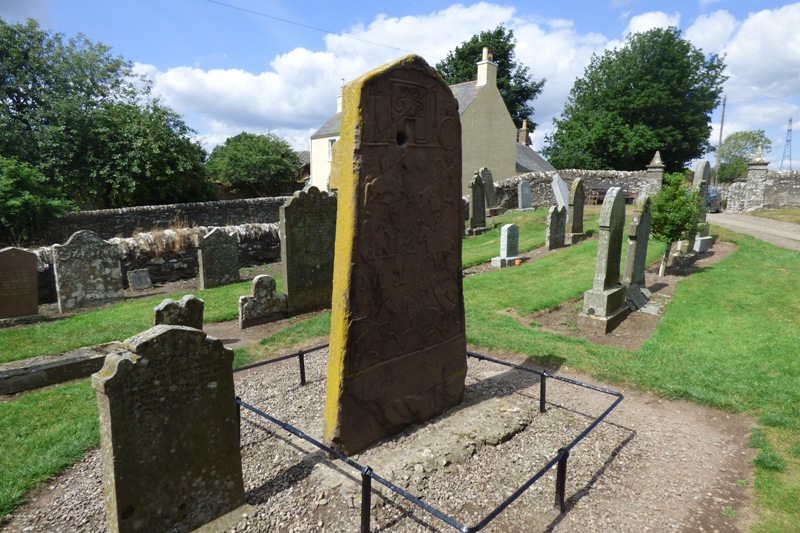 Whilst at Aberlemno Kirk, you should take time to explore some of its gravestones as these, whilst not as ancient or artistic as the Pictish stones, are interesting glimpses into the personal stories of local people. They also have some curious carvings on them and we particularly liked this almost cartoon like depiction of a skeleton. 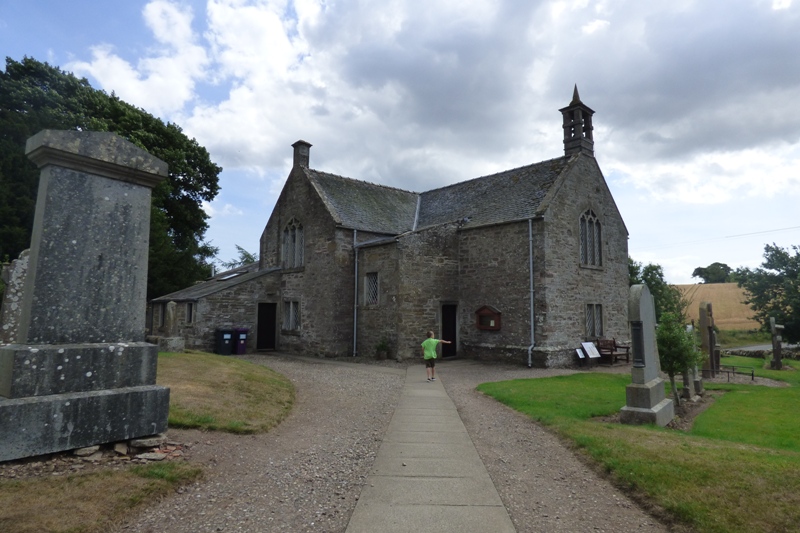 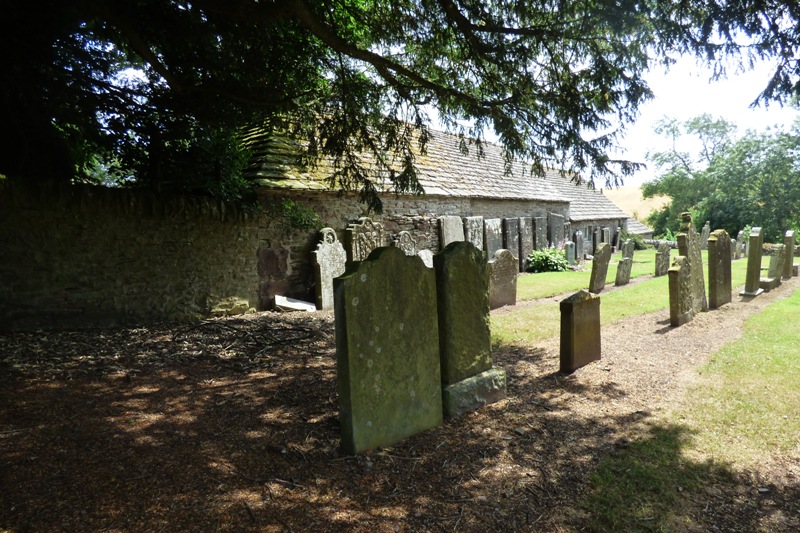 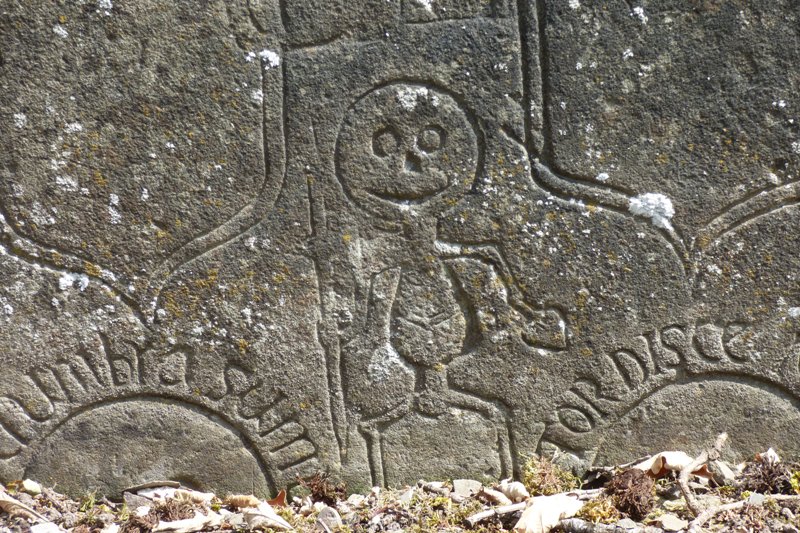