I subscribe to a variety of travel magazines and blogs and it seems that they are always listing the “10 Best This” or the “Top 5 That”. I understand the appeal of these lists, but they are something that I generally avoid doing as I previously explained in my August 2012 Blog.

Defining Scotland’s most scenic places is impossible, as these things are so subjective that any quantification of such an unscientific thing as beauty is meaningless. So this list is not meant to represent the best viewpoints in Scotland as there are so many worthy contenders for that list. It is quite simply a list of views that I reckon you will want to get your camera out for.

By the way, we make no claims at being landscape photographers and consider ourselves to be firmly in the photographic skill category of "Point and click".

Ratagan Pass – This viewpoint comes high on my list as it is a place that I have happy associations with. From the head of Loch Duich, you can follow a single track road that weaves its way in true alpine fashion over the Ratagan Pass to Glenelg. About three quarters of the way to the 350 metre summit of the pass, you arrive at a car park with glorious views towards the Five Sisters of Kintail. The sisters are a popular mountain ridge for climbers and they get their name from a local legend. According to folklore, there were originally seven beautiful sisters, but 2 of the prettiest ones were taken as wives by 2 Irish brothers who promised that their brothers would return to wed the 5 sisters left behind. The 5 sisters waited for several months and then eventually lost hope that their suitors would arrive, but as an insurance policy they asked a witch to ensure that they would retain their beauty until the brothers arrived. The devious witch did protect their beauty, but did so by turning them into stone. Hence the 5 mountains that you see today standing shoulder to shoulder looking out to sea.

Kilbrannan Sound – No particular folklore linked to this viewpoint, although it was once a place where you might have seen Viking long boats for this part of Scotland belonged to Norwegian Kings during the 12th to 13th centuries. Head south from Tarbert on the A83 and you come to a side road that carries you over the spine of the Kintyre Peninsula to Claonaig. On the descent towards Claonaig, you suddenly arrive at a point in the road where the view opens up to give you a wonderful panorama of the Island of Arran. As we’ve mentioned in previous Blogs, Skye gets a disproportionate amount of attention amongst Scotland’s many islands, but Arran offers every bit as much for the tourist and really shouldn’t be overlooked. In truth, there are many different places along the B842 that we could have suggested as worthy viewpoints for stopping at, but your first glimpse of Arran when cresting the summit of the road to Claonaig is the one that will leave the biggest impression.

West Coast of Harris – Yes I know this is a bit vague, but this whole coastline is just jaw droppingly beautiful all the way from Traigh Scarasta to Losgaintir, so picking out one spot as the best would be unjust. The real mystique of this area is the fact that the character of its beauty changes so much with the weather. In sunshine, the aqua blues of the sea and the golden sands of the beaches give it a vibrant palette of colours to rival any Caribbean island. Whilst overcast days bring out hauntingly sombre shades of gray with the mountains of Harris sensed as shadowy presences in the mist.

Gruinard Bay – Another great beach, but the viewpoint that will capture your imagination and linger in your memory is the first glimpse you get of the backdrop to Gruinard Bay when travelling north from Laide. After the road passes through a cutting in the rocks, you have a sharp right bend and your view dramatically changes from the confined perspective of the cutting to a sweeping panorama of rugged wilderness with Gruinard Bay standing out as a small oasis of fertile green land in an otherwise untamed landscape.

Quiraing – Even if you haven’t been to Scotland, the chances are pretty high that you will have seen this landscape in a movie without even knowing it was somewhere in Scotland, more specifically, Skye. Some of the films that have featured this unusual and almost alien landscape are “Stardust” and “Prometheus”. The view from the car park at the top of the twisty little road which climbs up from Staffin heading west to Uig is captivating for its dramatic collection of angular rock formations erupting from verdant slopes. There is certainly something a bit “out of this world” about the geology hence its popularity with film-makers seeking a backdrop with real screen presence.

Western Approach to Isle of Hoy – This is a different sort of photo opportunity as you’ll need to take the ferry from Scrabster to Stromness to appreciate it. When sailing this route to Orkney, the ferry passes close to the west coast of the Isle of Hoy and, after passing the Old Man of Hoy, you sail under the towering cliffs of St John’s Head. These are the highest vertical cliffs in the British Isles so it is worth staying on deck, but don’t worry as the captain will usually announce on the tannoy when you are approaching the Old Man of Hoy.

Glen Quaich – So far all of the places we have listed have been coastal areas and this is primarily because you are never too far from the coast in Scotland. However, there are lots of inland viewpoints that we could have listed such as the well known beauty spots of the Eildon Hills in the Borders (a favourite of Sir Walter Scott) or Queen’s View at Loch Tummel. These are such well known places that we feel they don’t need to be highlighted again by us so we are picking somewhere that is much less visited, but equally worthy. Glen Quaich is a fertile valley that runs in a North West to South east direction from the Kenmore end of Loch Tay. The glen is traversed by a single track road which has some seriously sharp hairpin bends at its northern end where it climbs over the ridge of hills that divide it from the shores of Loch Tay. After navigating the tight bends, you should take some time to get out of the car, chill and take in the lush green fields of this secluded glen. 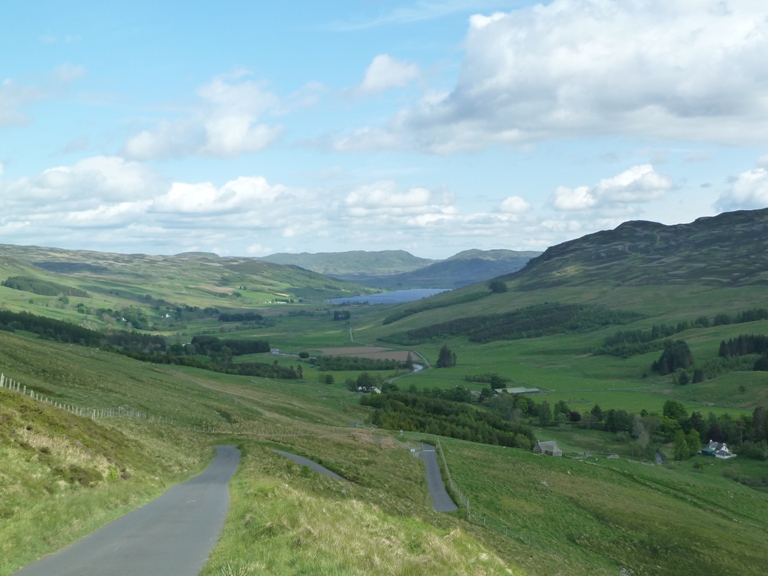 Mellon Udrigle – Back to the coast again for this view. To find this place you need to take a detour along a dead end single track road that starts near Laide. Of course, there are lots of beaches that we could have listed, but we highlight Mellon Udrigle as it faces North East towards the peaks of the Inverpollaidh (Inverpolly) Nature Reserve. From this beach, you can take a nice walk of about 1.5 - 2 hours around the Rudha Beag headland. If you see a ferry in the distance, it will most likely be the CalMac service which sails between Ullapool and Stornoway.

Loch Maree – There are several places along the A832 where you get great views of Loch Maree, but for this particular photo opportunity you need to get out of the car and use your legs a bit. A circular route, in the Beinn Eighe Nature Reserve, takes you through woodlands of native Scot’s Pine woodlands to a wonderful elevated outlook across Loch Maree towards the summit of the Slioch, which dominates the skyline of this loch. The path to the viewpoint is beautifully made ( I used to build mountain footpaths and have an appreciation of the art of building a cross drain), but it does take you through some midge infested territory so you might prefer to do this walk on a windy day when the midges are grounded. That said, the photo opportunity at the top of the climb is ample reward for the blood loss you might suffer on the ascent!